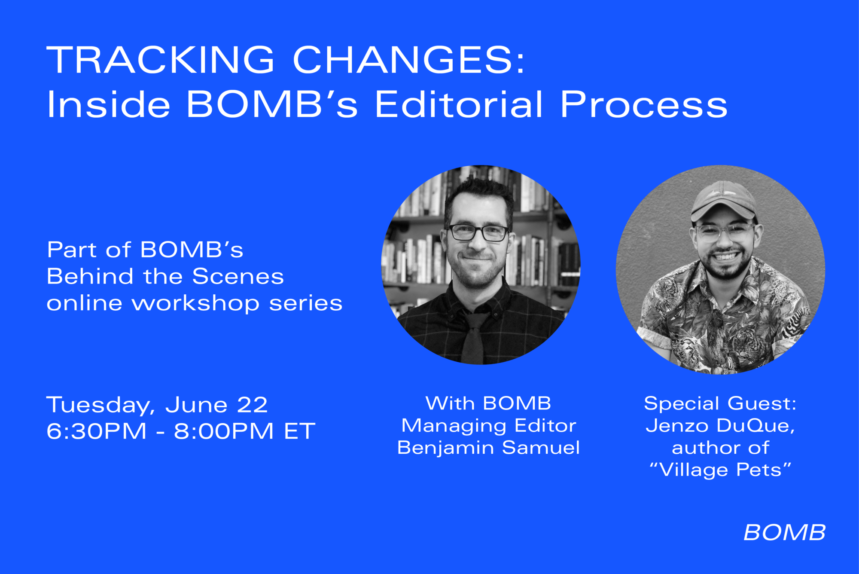 As part of our 40th anniversary celebration, BOMB’s Behind the Scenes Workshop Series offered an exclusive look at how our editorial process works. BOMB’s editors revealed how pieces develop from an initial idea to the final page, and shared tips, best practices for writers hoping to publish in BOMB and elsewhere.

This was the first in a series of BOMB Behind the Scenes workshops. In this workshop participants gained exclusive insight into the editorial process—from acceptance to publication—from both the writer’s and the editor’s perspective. Our special guest was writer Jenzo DuQue, whose story “Village Pets” appeared in BOMB’s summer issue (BOMB #156). The discussion was followed by a live Q&A where participants could ask a BOMB editor anything!

All participants left knowing what pitfalls to avoid when working with an editor. The workshop also answered that nagging question: when is my piece ready to submit? And participants learned how to accept or reject changes to preserve the integrity and heart of their manuscripts.

Benjamin Samuel is BOMB’s Managing Editor. Previously, he was the Managing Editor of Restless Books, the Director of Programs of the National Book Foundation, and an editor at Electric Literature, where he co-founded Recommended Reading. Samuel also teaches writing in the Narrative Medicine graduate program at Columbia University and serves as the co-chair of the Brooklyn Book Festival’s Fiction Committee.

Jenzo DuQue was born into a Colombian community in Chicago, but is based in Brooklyn. He received his MFA from Brooklyn College, where he served as an editor of the Brooklyn Review. DuQue is a 2021 Periplus Fellow and Shenandoah Editorial Fellow. His work has appeared in Glimmer Train, Joyland, and One Story, and was also selected for The Best American Short Stories 2021. You can read more at jenzoduque.com.