Bang on a Can, BOMB Magazine, and the Jewish Museum presented A Live Virtual Concert and Conversation featuring Steve Reich & Amy Sillman, with performances by Bang on a Can All-Stars David Cossin and Mark Stewart. 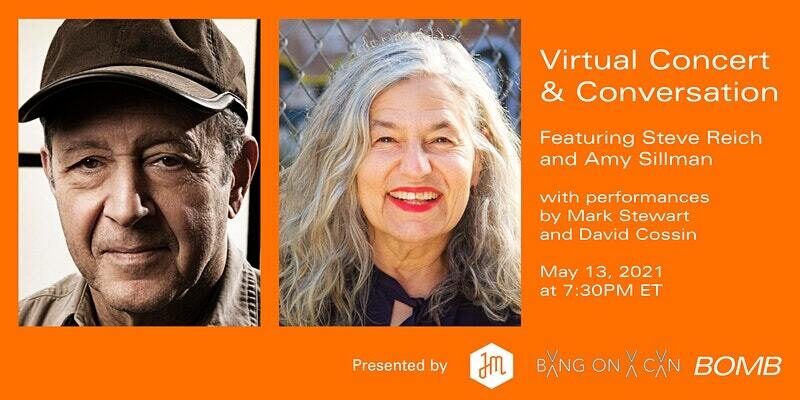 Featured artists were compensated by Bang on a Can, but audiences were encouraged to purchase a ticket. Doing so would help Bang on a Can to do more performances, pay more players, commission more composers, and share more music worldwide.

Among the most iconic and well-known composers of his generation, Steve Reich’s music has had a broad influence that continues to inspire music makers across genres, from techno and electronica to rock and roll. In the words of The Guardian: “There’s just a handful of living composers who can legitimately claim to have altered the direction of musical history and Steve Reich in one of them.”

Reich was joined in conversation with Brooklyn-based painter Amy Sillman, who had two triumphal shows in New York the previous year - a show of her own work at Barbara Gladstone Gallery and a show she curated for the reopening of the Museum of Modern Art. Coincidentally, she is also Steve Reich’s cousin.

For decades, members of the Bang on a Can All-Stars have been among the deftest interpreters of Reich’s music. Guitarist Mark Stewart, also a longstanding member of Reich’s touring ensemble, performed Electric Counterpoint, for solo electric guitar and 12 backing pre-recorded guitar tracks.