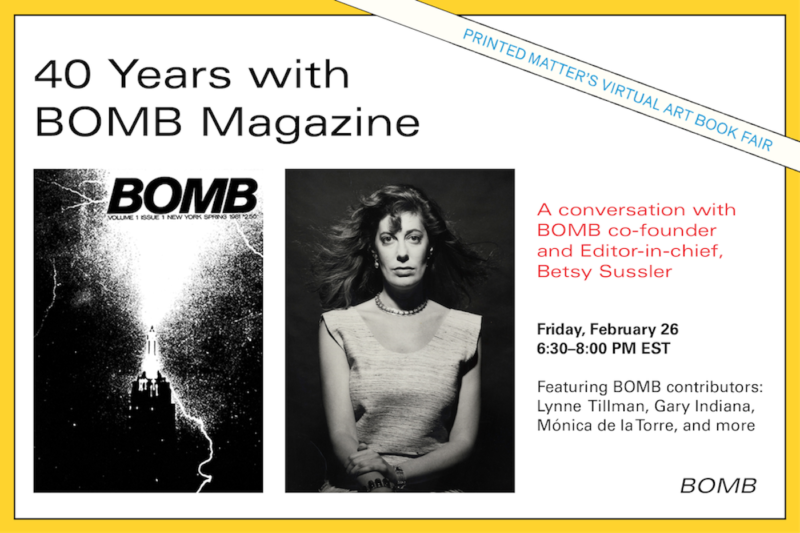 BOMB’s founder and editor-in-chief, Betsy Sussler, at Printed Matter’s Virtual Art Book Fair (PMVABF) in a conversation with past contributors and artists as they revisit the history of the magazine.

Born on the kitchen table of New York’s downtown scene in 1981, BOMB was committed then, as it is now, to delivering the artist’s voice and conversations between artists.

A look at BOMB and its genesis, with a Q&A at the end to answer questions about the magazine’s history as well as for those looking to start their own art publication.

Since 2005, Printed Matter’s Art Book Fairs have hosted international exhibitors featuring a wide variety of works—from zines and artists’ books to rare and out of print publications, and contemporary art editions. This new Fair expanded upon the rich tradition of our longrunning and beloved NY and LA Art Book Fairs, including over 400 exhibitors from 43 countries, with online programs, performances, games, and more.

Over the course of five days, PMVABF hosted dozens of live and pre-recorded programs including lectures, DJ sets, screenings, and conversations, led by artists, publishers, designers, musicians, and writers.

The event featured longstanding Fair programs such as The Classroom, a series of conversations with artists and publishers, and The Stage, a diverse lineup of musical performances. For this online iteration, the Fair debuted a series of guided tours with special guests, as well as a new program series centering activist publishing practices by exhibitors in the Friendly Fire section, and more!