Michael Andrews on the moral gravity and literary power of Mathias Énard’s Zone. 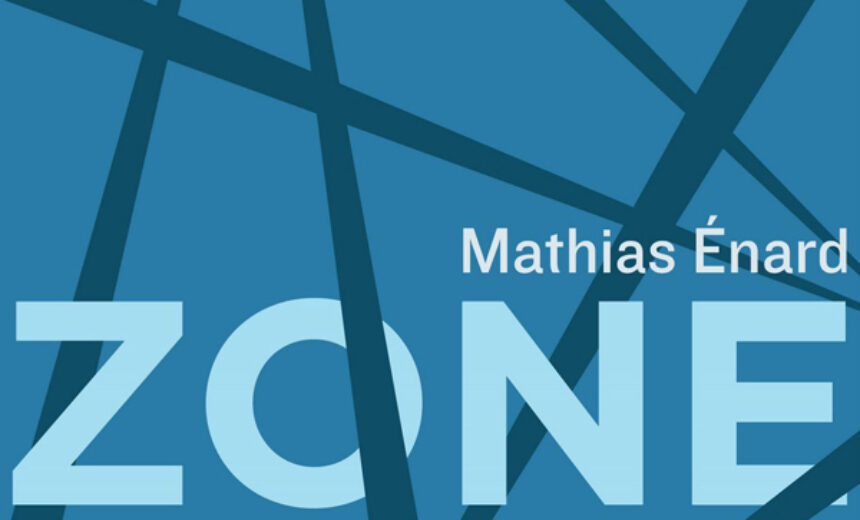 Mathias Énard’s Zone—all 500 pages of it—consists of a single sentence. This sentence describes in unsparing detail some of the grisliest atrocities in the history of war—episodes from the Holocaust, the Algerian War of Independence, the War on Terror, and other conflicts. While difficult to stomach, this graphic violence is anything but gratuitous. It is rather the necessary hard evidence for the novel’s astonishing meditation on war and history. Énard plumbs the depths of human cruelty to create a work of extraordinary moral gravity and literary power, a novel that deserves a place among the great works of war literature.

The narrator of Zone is an afflicted man named Francis Mirković, son of a French father and a Croatian mother. Although a French national, Francis fought as a volunteer soldier for Croatia during the Balkan Wars of the mid-’90s, when he was young and full of romantic ideas about combat. The experience wrecked him. He eventually returned to France and was recruited by the French Intelligence Agency to be an “international informer,” gathering intelligence in global conflict zones. As the novel opens, Francis has abruptly left this job to start a new life under a new name. Before abandoning his identity, however, he intends to do one final thing as Francis Mirković: deliver to the Vatican a briefcase containing intelligence documents that he has smuggled out of the agency, evidence of war crimes committed by European governments throughout the 20th century. Zone unfolds during Francis’s train ride from Paris to Rome, although the action of the novel doesn’t take place in the train—it takes place in Francis’s restless mind. As the train advances towards Rome, Francis recollects in obsessive detail his time as a soldier in the Balkans and his work as a spy in various global conflicts, including the Israeli-Palestinian conflict, the sectarian strife in Lebanon, and the War on Terror. These recollections lead him in turn to think about wars of the past that created the preconditions for the modern wars he participated in. He thus contemplates World War II, The Spanish Civil War, World War I, the Armenian Genocide, the Napoleonic Wars, and even the Trojan War. His thoughts take the form of sprawling digressions that crisscross vast expanses of history and geography, and because Francis is a history buff, his digressions are rich in esoteric historical detail. What emerges is a vivid history of war in the West told by an erudite and traumatized man.

This history is framed by what one could call the foundational war of Western Civilization: the sacking of Troy in Homer’s The Iliad. Zone emulates the structure and style of The Iliad in an effort to draw parallels between the most epic of ancient wars and the wars of the modern era. Zonehas the same number of chapters as The Iliad—twenty four—and Énard’s digressive, rhythmic prose echoes the loose style of Homer’s epic poem, which in Ancient Greece was traditionally recited from memory to an audience. Énard also borrows some of Homer’s best-known epithets, including “well-greaved Achilles” and “rosy-fingered dawn.” By applying descriptions of the Trojan War to modern conflicts, Énard underscores the historical continuity between the two.

Indeed, for Francis there is an unbroken thread connecting the sacking of Troy to the conflicts of today. Every war gives rise to the wars that follow, creating a continuous chain of bloodshed between the past and the present. Francis recalls an intelligence mission he conducted in Iraq after the US-led invasion in 2003. While in Basra, where British soldiers were stationed, he discerned the legacy of World War I:

… the English soldiers were returning to Basra, to the same place where their grandfathers had been stationed in 1919, after the Dardanelles, after the Hejaz and Syria, the exhausted Tommies rested their legs in the country of palm trees and dried lemons, by the edge of the swamps and meanderings of the Shatt al-Arab, they stuffed their faces with dates and lambs stolen from the native shepherds, wondering how much longer the war would last, it lasts forever, almost a century after Gavrilo Princip’s Balkan gunshot, the referee’s pistol shot in a long-distance race, all the participants are already at the starting line, ready to dash forward into the world of Ares great eater of warriors, hoping to return loaded with treasure and glory …

The British soldiers patrol the same ground their grandfathers patrolled almost a century earlier, when Allied forces occupied the region of the Ottoman Empire that would later become Iraq. Little has changed since then. The “long-distance race” that was initiated by Gavrilo Princip’s assassination of Archduke Ferdinand in Sarajevo in 1914—the event that set off World War I—continues in the US-led invasion of Iraq. And this race is likely to last a very, very long time; by the 2003 invasion, the “participants” in the race have only made it as far as “the starting line”—the race hasn’t even truly begun. The carnage of 1914 persists in the carnage of 2003, and in the interim the war has come no closer to ending. In Zone, war is less a series of separate conflicts than a single ongoing conflict that “lasts forever”—war as perpetual disaster.

This sense of unceasing catastrophe is reinforced by Énard’s prose style, his single endless sentence driving the reader inexorably from one bloody conflict to the next. Yet, despite the demands the novel makes on one’s tolerance for graphic descriptions of war, it is strangely readable. It races by, like a train barreling towards Rome. This velocity is created by the absence of periods and paragraph breaks but also by the presence of other punctuation like commas and dashes; Énard’s meticulous placement of these generates a steady rhythm that propels the reader toward the final pages. The translator of Zone, Charlotte Mandell, has deftly transferred this rhythm from the original French to English, and it is just one impressive aspect of her superb translation. By the end of the novel, you are exhausted and battered but also flush with the knowledge that you have just read a monumental book. With its historical sweep and grand moral import, Zone is an epic of modern literature.