On writing secondhand trauma, cycles of behavior, and the loneliness of internalized homophobia. 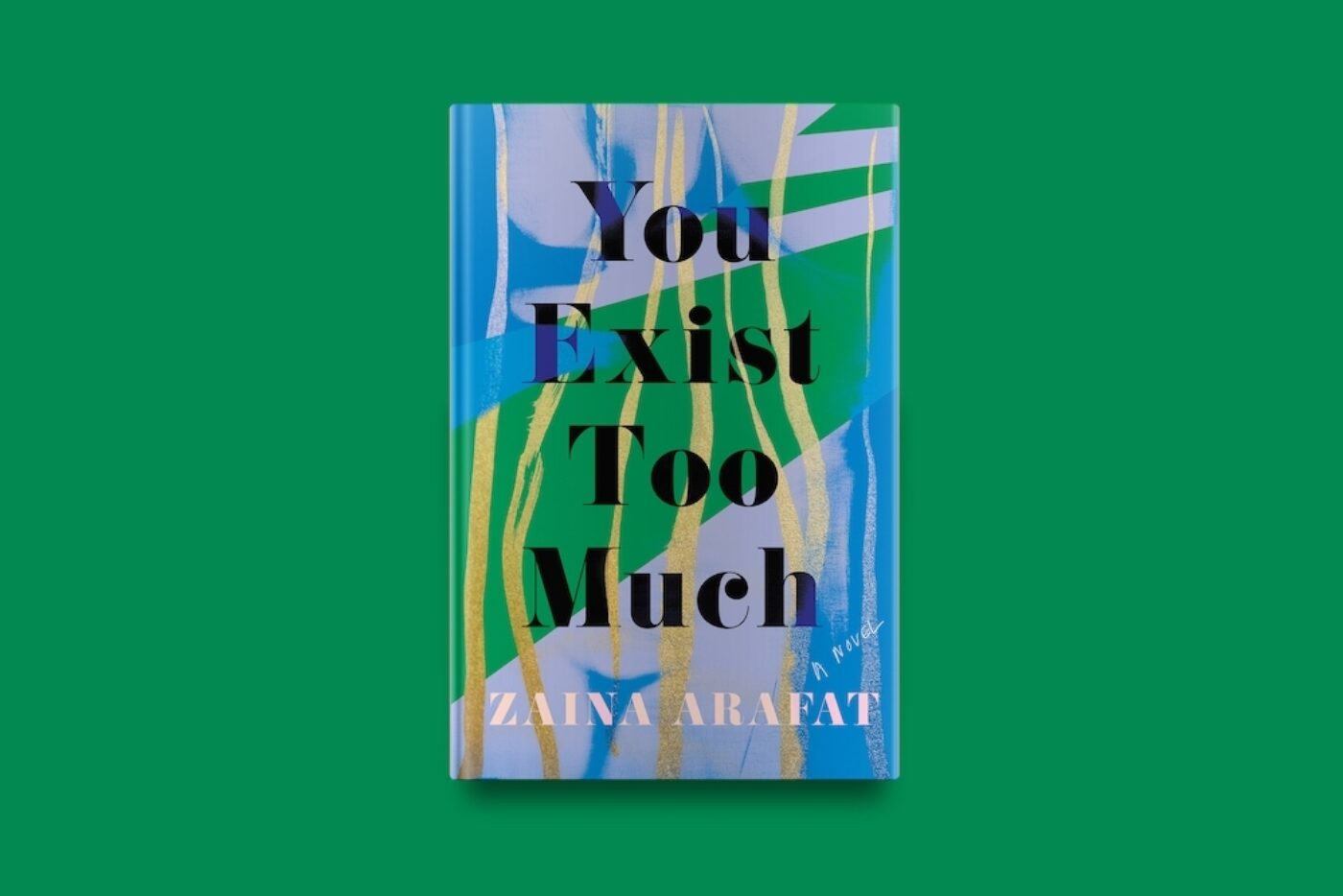 Zaina Arafat’s much anticipated debut novel, You Exist Too Much (Catapult), is a magnetic read. It pulls you into the swirl of its turbulent, sometimes self-aware unnamed narrator and keeps you uncomfortably tied to her, unable to look away as she makes decisions that harm those who love her, or as she blames herself for getting hurt. It’s an aching book, preoccupied with intergenerational trauma, the cultural and emotional rifts between a first-generation Palestinian-American woman and her immigrant parents, and the various forms of isolation she experiences. But it’s also a warm and occasionally hilarious read that plays with the narrator’s unconscious knowledge and embodied memory, especially when it comes to her difficult relationship with her sometimes loving, often overbearing, and occasionally furious mother.

I first met Zaina when we were both members of Paragraph, a writers’ co-working space in New York City, long before we ever knew we’d have debut novels coming out only weeks apart, both featuring queer women protagonists with intimacy and mommy issues. We video-chatted recently after emailing and messaging on Twitter for several months in anticipation; this interview has been condensed and edited for clarity.

Ilana Masad You Exist Too Much is about desire and hunger: hunger for love, for acceptance, for affirmation, for a homeland, for a coherent sense of self, for someone to notice that something is wrong. Did you always know that you were writing about that, and about all the kinds of unattainable hungers you’d be exploring?

Zaina ArafatI knew that I was writing about desire, and desiring things that are unattainable. I think that I was questioning why these things were unattainable and why this desire for these unattainable things existed. Why is it easier sometimes to want something that’s unattainable? What’s behind that?

IM There’s a kind of dramatic irony running through the novel. Some readers might recognize early on that the narrator is suffering from, among other things, intergenerational trauma. But even though she is aware of herself as a Palestinian living in the diaspora, she doesn’t always link this directly to the ways in which her parents treated her or each other while she was growing up. What was important to you about showing this tension between some kind of knowledge and not others, this semi-self-awareness?

ZAThere are so many layers, especially with secondhand trauma, right? If your parents lived through war or grew up under Occupation, as in the case of this protagonist, and had a break from their Homeland, you don’t have a direct experience of those traumas. However, they affect you by virtue of the fact that you’re being raised by these people and you’re born into this legacy, and your entire extended family is also behaving in ways that are marked by the fact that they’ve endured these traumas. So it’s easy to feel detached from these specific incidents in one’s cultural history and these moments of trauma, but at the same time, they’re closer than you think, and they affect you more than you realize.

That’s one of the tricky things about being first-generation and growing up in a diaspora. You feel as though you have this false illusion of being disconnected and safe from all of that trauma, but at the same time you really aren’t, because it’s what’s shaped you. Flashbacks take place throughout the text, and the point is to show how those moments—often in the West Bank or in some part of the Middle East—can be politically or culturally or socially fraught and affect the narrator later in life without her consciously realizing it.

IMThis structure kept me captivated throughout the book. I saw these flashbacks, which often come in the midst of a painful moment of the main narrative, operating in two ways. On the one hand, it seems like the narrator’s own avoidance tactic, like she’s glancing away from the moment she’s in, while on the other hand, like you mentioned, this gets at the very real cycle she’s found herself in where she’s looking at traumas of the past that have affected her. How did that structure evolve as you wrote the book?

ZAIt happened very automatically! I didn’t even plan for that to happen. Upon revising, I had to move things around, because I wanted the flashback to speak to the present moment, not in a really overt and direct way but in an indirect way so that the reader could grasp that, Oh, this is informed by this. But I still left out transitions—the flashbacks just sort of happen, and that was intentional, because I wanted it to directly just dip into, like, This is the underlying incident that informs this present moment, without explaining.

IMThere’s a small moment at the end of the book (this isn’t a spoiler) when the narrator goes into the LGBT Center and has an anxious little interaction with the person at the front desk. It was at that moment that I fully grasped how much she was lacking a queer community before that despite living a queer existence through her desires, sexual acts, and romantic relationships. Why do you think she never sought out queer friendships, and would her trajectory have been different if she had had friends who were queer?

ZA Yeah, you’re right. It’s so strange that she has a queer life, but she in no way identifies as queer or with a queer community. That is for two reasons. One is that first and foremost, her identity has always been informed by her Palestinianness, and there isn’t really room for queerness within that sphere. Being queer is not even off limits, but just so out of the realm of consciousness, of being Palestinian, that she can’t reconcile the two enough to belong to or take part in the queer community in any way. The second reason why she doesn’t identify as queer, and perhaps why she doesn’t seek out queer friendships, is that she’s so internally homophobic. She’s repulsed by seeing herself reflected in others who are also queer, repulsed by people seeing that she’s queer. This is really sad, and it’s really lonely, and it’s alienating. Even though she’s had partners that try and bring her into that, she still kind of refuses, and I think if she had had that, she would have been better off. Her alienation and loneliness drive so many of her bad choices and destructive behavior.

IM Speaking of the narrator’s bad choices and destructive behavior, we see different relationships or flirtations that she finds herself in, and while sometimes she harms others, there are times when she’s distinctly being harmed, and a lot of this has to do with the power dynamics of the situations. How did you think about those dynamics in the book?

ZAPart of her desire for these certain unattainable women stems precisely from a power imbalance which sometimes isn’t manipulated at all, but in these cases it is. I hoped that the reader would be able to detect that there was inappropriate boundary-crossing happening on the part of the person who’s in the position of power, and to form some understanding of how, when someone is in a position of power and they take advantage of that, that affects you and can bring out bad behavior in you. I also wanted to explore why it is that the narrator is drawn to these power imbalances and why it’s familiar to her and therefore something she seeks.

IM About two-thirds of the way through the book, during a flashback chapter, the narrator expresses that people don’t believe that she can remember the earliest memories she has. “But I remember,” she tells us. “Perhaps because I want to. I can just as easily forget when I want.” After this, the main narrative switches from past tense to present tense. Would you tell me more about this narrative decision and how it relates to this notion of memory as choice?

ZAThe shift to present tense spoke to the addiction and recovery aspect of the book, really, where the narrator is now equipped with all these lessons and new tools. She’s going back out into the world, and it’s like, Is she going to apply these to the situations that she encounters or not? Part of her problem is seeing a few steps ahead of her that something might lead to suffering and destruction, but not knowing how to escape that because the pattern is so ingrained in her and the desire for that is just so habitual. We’re entering this challenge of whether she’s going to be able to behave in ways that are healthy or if she’s going to fall back into self-destructive patterns. Behaving in ways that are healthy means not forgetting, and behaving in self-destructive ways means forgetting.

IM Ah, so choosing not to forget means remembering what the consequences have been in the past.

ZA Right, that’s what that speaks to.

IMThe relationship between the narrator and her mother is a complex one. How did you think and write through it?

ZAI thought of it as one that’s based in deep, deep, deep love, but which also has fractures and breaks that result from inhabiting different cultures essentially, and having totally different preferences, tastes, fashions, values—the pain that comes from that. The mother doesn’t always see her daughter as someone she’s related to, and yet there’s so much love there. I’m realizing now that this intense love is also codependency. There’s terror around it and there’s a rage around it, and these fundamental divides that keep it from manifesting healthily.

One of my main goals with the mother-daughter relationship, and with the mother specifically, was to find empathy for her and to understand what informed her life and her traumas and how, at the end of the day, they could forge a bond in the midst of this, to find ways to love one another, to communicate that love.

You Exist Too Much is available for purchase here.

Ilana Masad is the author of All My Mother’s Lovers.