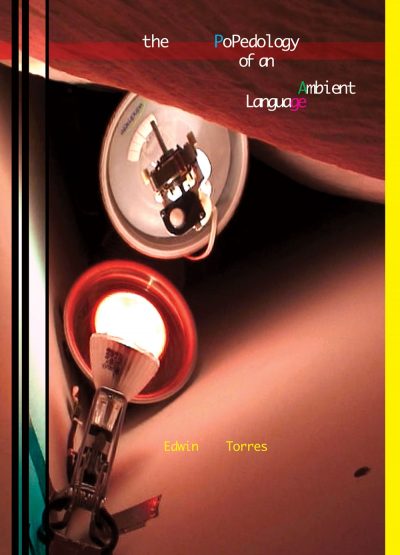 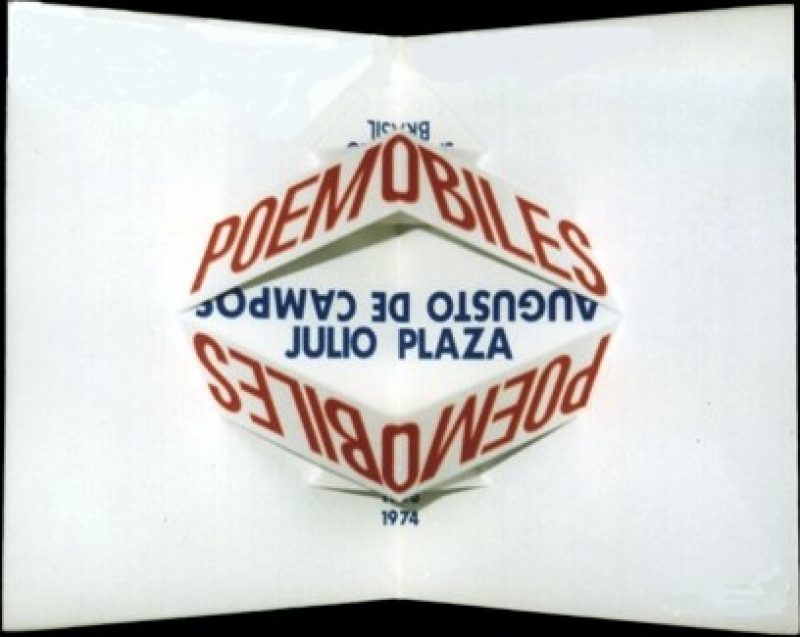 Augusto de Campos, 1968/74. Images from de Campos’ website (http://www2.uol.com.br/augustodecampos/poemas.htm) and/or courtesy of the editors of Telephone and Michelle Levy.

In the 1950s in Brazil, Augusto de Campos and a few collaborators concocted what they called concrete poetry—a “tension of thing-words in space-time,” as a phrase of de Campos’s manifesto puts it. Their work collided written language with image and sound, creating a synesthetic barrage of poems that are also in their ways physical objects. “The concrete poet does not turn away from words, he does not glance at them obliquely: he goes directly to their center, in order to live and vivify their facticity,” de Campos proclaimed. The editors of creative translation journal Telephone recently joined forces with the Elizabeth Foundation of the Arts’ EFA Project Space to put on an exhibition featuring de Campos’s work alongside hybrid translations of it by a number of poets and artists. After visiting the exhibition, I exchanged emails with Sharmila Cohen of Telephone and Michelle Levy from EFA Project Space to get a sense of the resonance of concrete poetry. Selected work of de Campos and translations follow.

Zack Friedman Can you tell me a bit about de Campos’s work? What attracted Telephone and EFA to him?

Sharmila Cohen We set out to feature translation in a way that would include visual artists and poets, as well as function within a gallery setting. While it wasn’t the only option we discussed, concrete poetry did seem like an obvious choice.

Augusto de Campos is considered one of the founding fathers of the Brazilian concrete poetry movement. His work is deeply involved in the connections between language, sound, and image. It spans a wide range of media, from more traditional poems that are words on the page to his poemobiles (three-dimensional poetry “sculptures”) to sound recordings to interactive websites. We wanted to have an exhibition in which the idea or act of translating poetry could be expanded into a physical space and a variety of media—featuring de Campos meant that the original works would not only welcome that, but also pretty much require it.

Michelle Levy The development of this exhibition started with an interest in revealing the creative process behind translation, and in providing a platform where connections between visual artists and poets could be made through such a process. As I was going around meeting with poets and translators to brainstorm, Telephone was busy getting ready for the launch of their first issue. After they were mentioned to me more than once, I said, “I have to meet these people!” We met over coffee and I immediately invited them to curate the poetry portion of the exhibition, and they immediately accepted. Soon after, they proposed that we model the exhibition after the format of the journal and invite all the participants to create new work.

ZF How does “concrete poetry” fit in with or alter Telephone’s project? Are there theories of language and translation underlying each that you see as congenial to each other or productively in tension?

SC A very basic description of the journal is that it features multiple translations of individual works side by side. This is, of course, an acknowledgement of the fact that poetry translation can be approached in a variety of ways that are all valid and interesting. We tend to throw around the word “translation” in quotes pretty frequently—I think that that is our way of indicating that the term itself casts a wide net. That being the case, concrete poetry andTelephone and Telephone’s idea of translation seem to be entirely congenial.

In Augusto de Campos’s manifesto, he starts out by explaining that concrete poetry takes full responsibility for language—that is, not only the meanings behind the words, but also the words themselves. Poetry translation must focus on more than just definition, but things like sound, context, form, interpretation. He states:

The poetic nucleus is no longer placed in evidence by the successive and linear chaining of verses, but by a system of relationships and equilibriums between all parts of the poem.

This means of working with “all parts of the poem,” their relation to one another, and the balance therein, really seems to match up with our approach. Maybe what we’re doing is more deconstructionist, maybe we’re breaking down those elements (insofar as each “translator” takes a different approach), but we want them all to be visible—we put them all together.

He sums up the manifesto by defining concrete poetry as the “tension of thing-words in space-time,” which is the exhibition’s namesake because it really resonated with our project. The poems do not solely exist on the page, but also within time and place; they are a series of structures, a tension, they are objects. 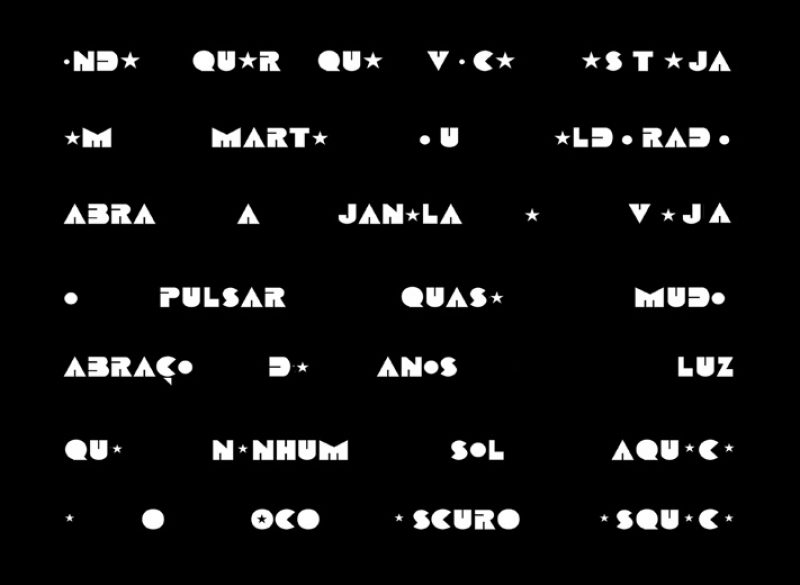 ZF How does bringing in visual art and making the project multidisciplinary extend the practice of creative translation?

SC Maybe this is an obvious answer, but changing the media can be a form of translation in itself—words can be translated into a video of concentric circles; a video poem can betranslated into a Morse Code path on the floor; a two-tone poem on paper can be translatedinto a performance and a painting. In this context, a change in media is also a change in language—new layers are added. The translators were free to use any medium of their choosing—that allows for an infinite number of variables or venues of translation.

ZF In what ways do you see the different participants as being in dialogue with each other and with de Campos? Does the curation enable this?

SC The source material, de Campos’s work, is the main thread that ties all of the work in the exhibition together. Every participant had his or her own way of responding/interpreting/translating, but there were trends. For example, many of the “translators” focused very specifically on the function of language. If you look at Steve Savage and Jean-Sébastian Baillat’s posters, they very literally translated Augusto de Campos (the name), based on letter frequency in multiple different alphabets, then the text was put on posters with a variety of designs. Andrea van der Straeten had the poem “SOS” translated into International and Austrian Sign Language, using a variety of synonyms and rhythms, blurring the lines between speaking and performance. Brendan Fernandes also translated that poem, but he used Morse Code and used it to lay out a walking path on the gallery floor. There are many more examples of this occurring in the gallery—I’d say it’s arguable that all of them do this in one way or another. This correlates well with concrete poetry and de Campos’s work. Language is made visible, audible, interactive, and so on. Full responsibility is being taken for language. 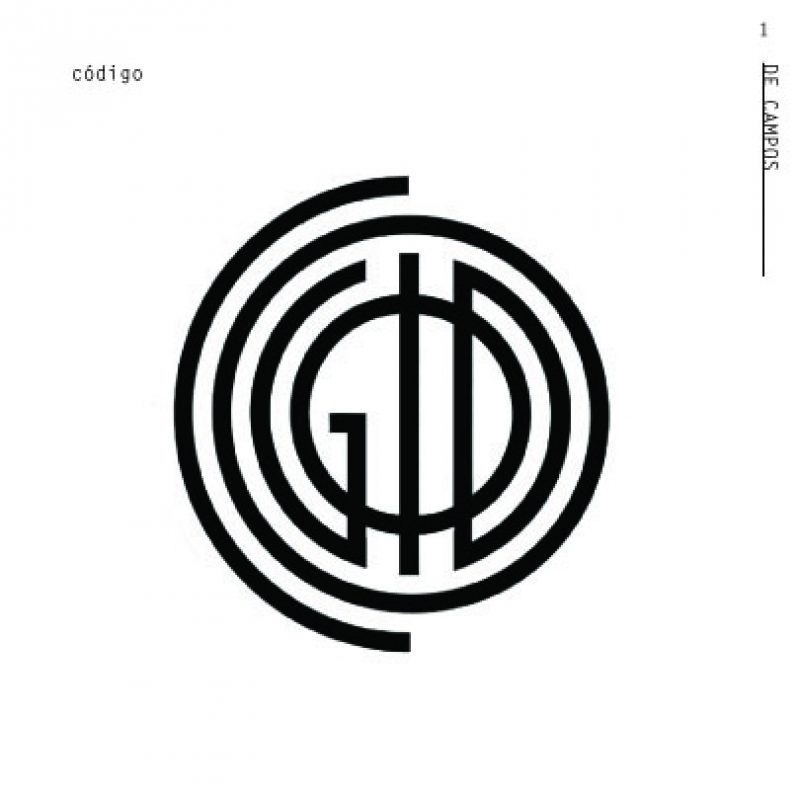 At some point during the planning process, we thought about naming the exhibition after the poem “Codigo.” This was partly because of the poem’s relevance and partly because it seemed like a great logo in and of itself. It seems that some of the contributors noticed similar things themselves. Here we have provided four different versions of that poem—de Campos’s original, along with translations from Deric Carner, Kenneth Goldsmith, and Edwin Torres. 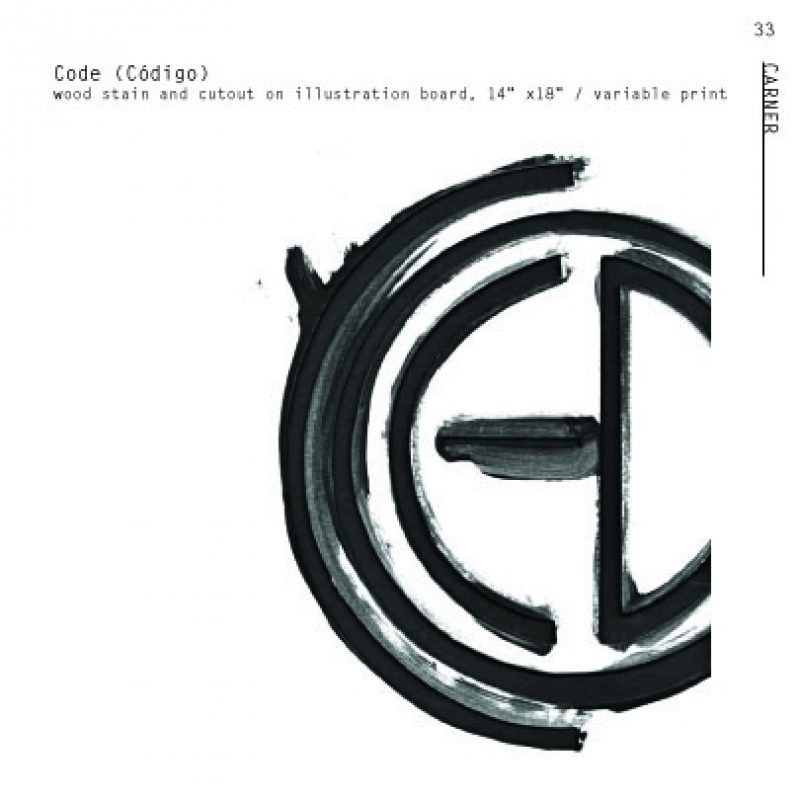 Carner’s version is a print using wood stain on illustration board—he describes its overall project as a deployment of “the kinks and marks of an anti-design aesthetic.” 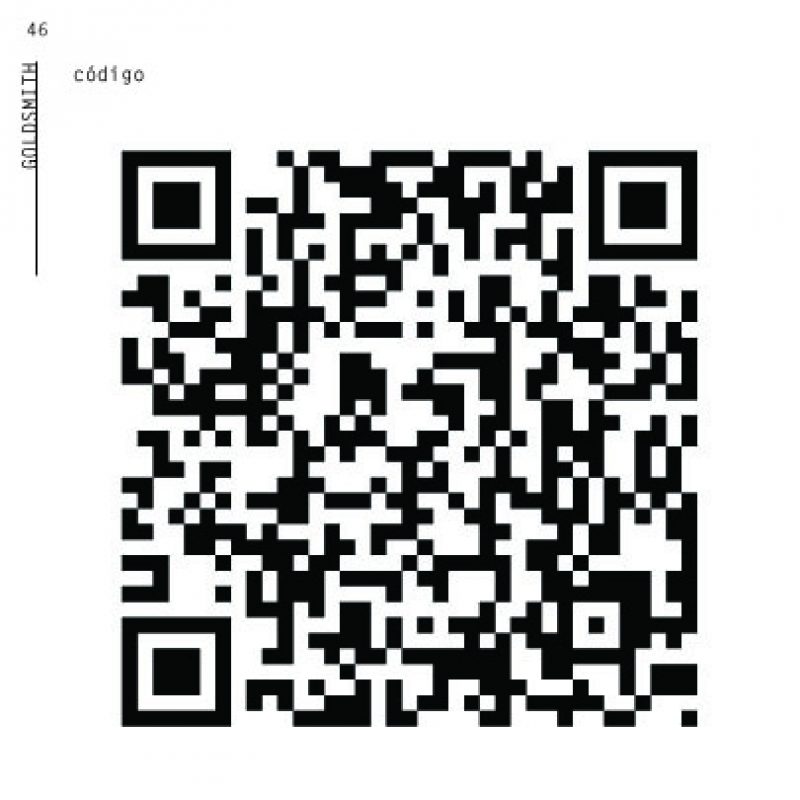 Kenneth Goldsmith created a code that could be scanned by a smartphone. 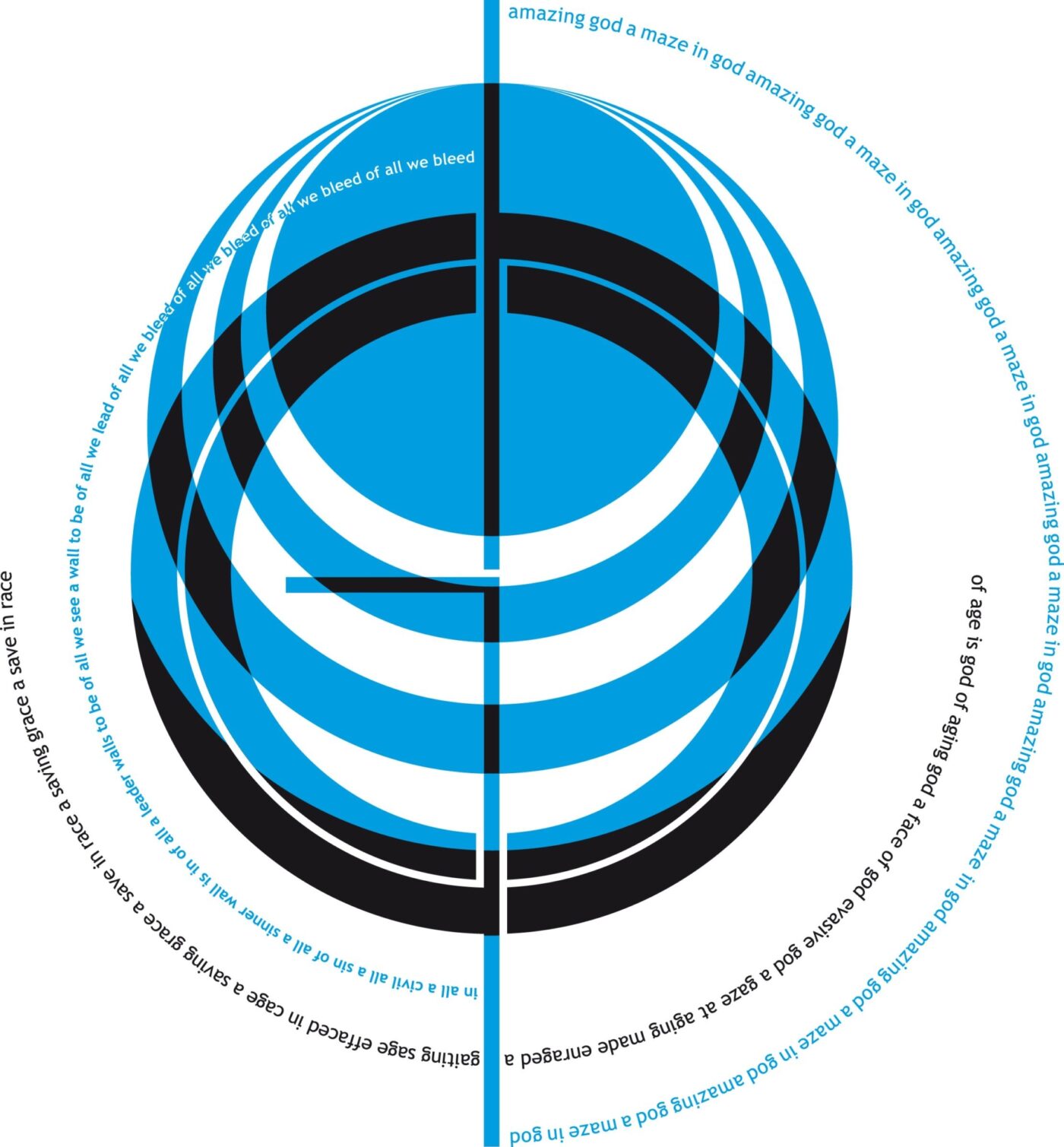 Edwin Torres made a two-tone poster that not only integrated design, but also ran with the concept of overlapping words through sound and meaning.

All of this describing is to point out how these translators focused on the ideas of visual design, media, and the dissemination of ideas through different venues. I read somewhere that de Campos’s specific methods of design and topography were later used by advertisers—all of these poems seem to be influenced by that, each in their own way. 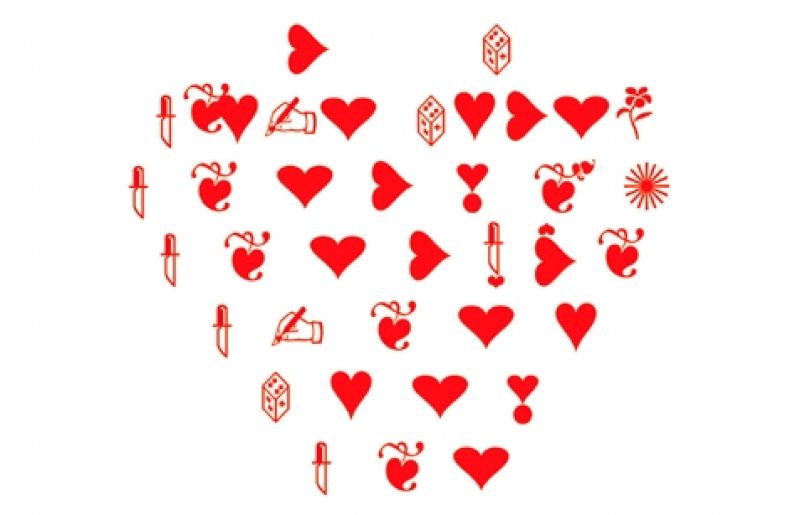 ML Although there was a general idea of where the work would go beforehand, a lot of the arrangement happened once all of the work was in the space together. The main thinking behind it is that we are setting up a conversation. When you enter the space, there is an area dedicated to the work of de Campos. It is a very rare occasion to be able to see this much of his original work on display, and it acts as the starting-off point for viewing the rest of the show. We hoped that the viewers would spend time with de Campos’s work first, in order that it remain in the memory while looking at all the new interpretations. Beyond that, the goal was to bring the viewer through the space, spreading out the most graphic elements (rather than hanging them all together) in order to punctuate the space. It worked out very nicely that Brendan Fernandes’ vinyl floor Morse code piece laid tracks throughout the entire show. Detanico & Lain’s work, the new interpretation of Pulsar, was projected all the way in the back of the space, not just for its dramatic, graphic strength but also because this contemporary Brazilian artist team (the only Brazilians in the show) created this work in tribute to de Campos, who had greatly influenced their generation of Brazilian artists. Ultimately the show is bookended between the body of de Campos’ work and the work of the artists who have arisen out of his legacy. What was great about the layout of the rest of the show was that the arrangement was presented in such a way that it was impossible to determine which work was created by a poet and which by a visual artist. It all existed somewhere in between! 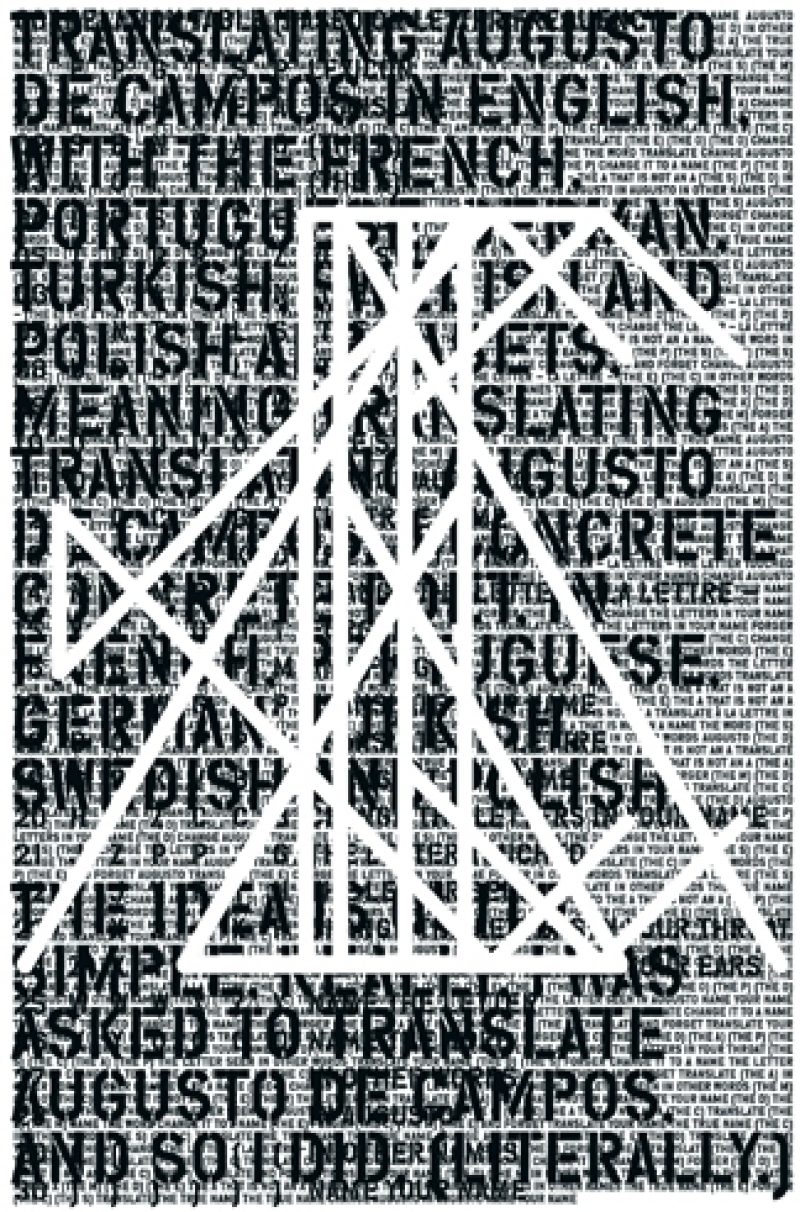 For more on this project, check out Telephone and the Elizabeth Foundation of the Arts’ EFA Project Space.