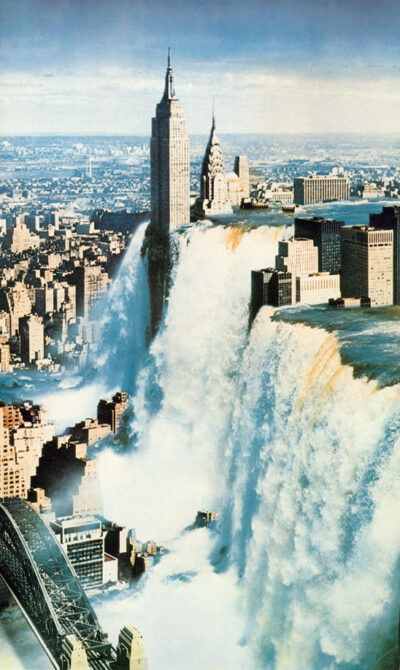 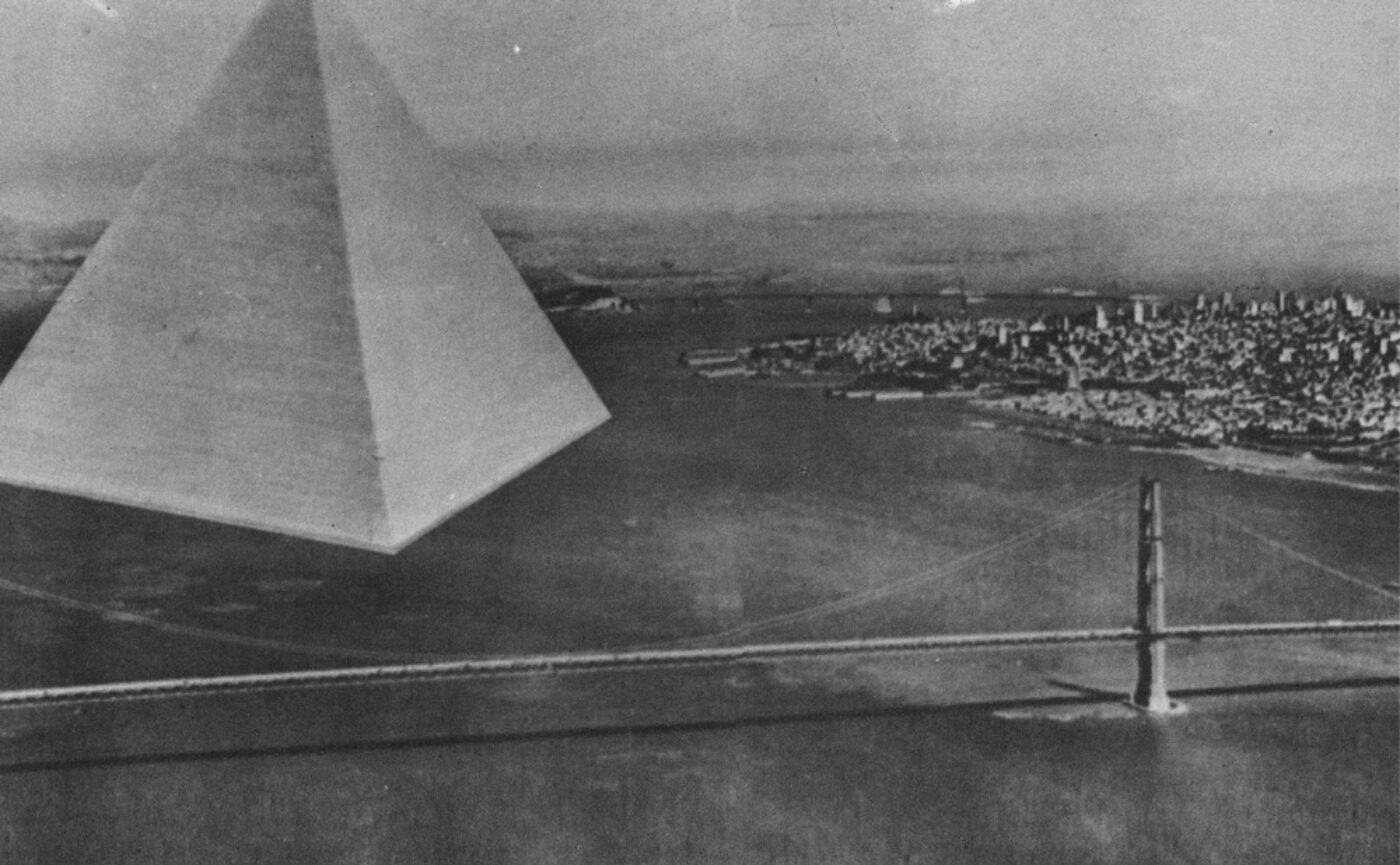 Artists be hating on architecture.

Uncorking a full bottle of whoopass (or is it pent up envy?) Wolf Vostell (his words above) and Dick Higgins’s 1970 Fantastic Architecture (originally published by Something Else Press) starts with a bang: a double spread of a giant bomb blast captioned “nuclear explosion,” followed with a photo of an imploding building. Reissued by Primary Information, Fantastic Architecture is one of those omnibus Fluxus packages in whose eclectic contents one finds the kitchen sink, or, in this case, a project for a gigantic electric hand mixer perched atop Berlin’s Neue Nationalgalerie. If existing cityscapes can’t be leveled in a tabula rasa gesture of annihilation, many contributors to the volume use the enormous scale of their urban interventions to utterly dwarf or crush existing architecture. In Gerhard Rühm’s “Plan for Building a New City of Vienna,” four megastructures in the shapes of the letters W, I, E, and N, which spell Vienna in German, stomp Godzilla-like over the humbler buildings of the city.

Claes Oldenburg’s numerous contributions to the volume employ the absurd scaling up of everyday objects that became the characteristic feature of his public sculpture. A mammoth wing nut towers over a Stockholm square, a gigantic toilet float ball hangs out in the River Thames, dual cutting edges of scissors replace the obelisk of the Washington Monument, and a scattering of pool balls are a “Proposed Colossal Monument for Central Park.” Oldenburg’s scale shift functions as a kind of belittlement, the monumentality of the engorged commodity diminishing the use-value conceits of “traditional” architecture.

It’s fitting, then, that given the compendium’s fascination with monumentality Vostell and Higgins reproduce an image of Buckminster Fuller’s 1965 “Tetra City” project, a plan for a gargantuan tetrahedral apartment house floating in the San Francisco Bay, the height of the pyramid a good three times taller than the towers of the Golden Gate Bridge. Fuller’s project justified itself with an ersatz claim of efficiency, billed as a plan to employ the heretofore underutilized oceans as a potential site for human colonization and habitation. In this, it is among the rare projects in the book that addresses itself to problems of shelter.

Interspersed with Higgins’s typed musings on systems, materials, engineering, etcetera, printed on cool-looking transparent vellum, the volume reproduces handwritten notes, poems, drawings, and photo collages from its three dozen contributors. Those solicited for proposals include John Cage, Richard Hamilton, and Carolee Schneemann. Projects by Kurt Schwitters and Raoul Hausmann add Dada cred. Interesting then that, for all its reputation for destructiveness, the Dadaists’ works—a 1919 Hausmann drawing of laddered platforms (guard towers? stage sets? gardening trellises?) and a photo of Schwitters’s Merzbau, the reliquary for scavenged objects and things gifted to him that he constructed in his home in Hannover during the interwar years—don’t participate in the colossus logic of the majority of the book’s projects. If the “fantastic” thing about artists reflecting on building in 1970 was that architecture could be reduced to a big pop sculpture gag, the joke seems haunted by the enigma of those early twentieth-century works.

Eva Díaz’s The Experimenters: Chance and Design at Black Mountain College (2015) was published by University of Chicago Press. She was awarded a Creative Capital/Warhol Foundation Art Writers Grant to research her book about Buckminster Fuller, The Fuller Effect: The Critique of Total Design in Postwar Art. She teaches art history and design at Pratt Institute.

A Day in Brasilia  by Carlos Brillembourg 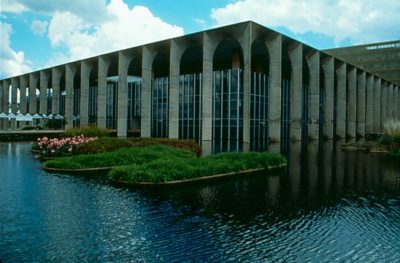