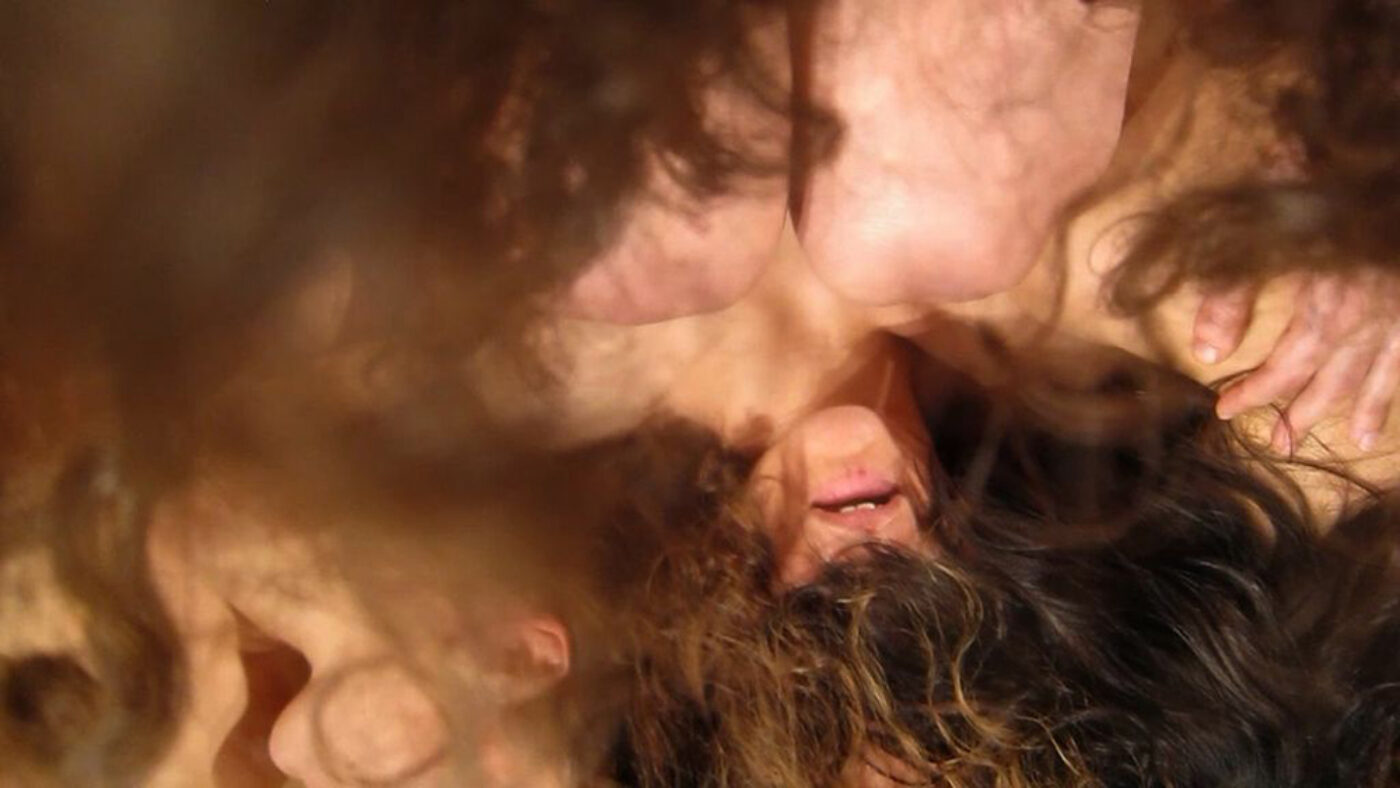 Melinda Ring’s triptych consisting of an evening length dance, Forgetful Snow, and two performance installations, The Landscape and (Memory of) Snow Machine, will run at the Kitchen from May 8th through May 17th, 2014. Following the New York performance, she will remount the work at The Box Gallery in Los Angeles in July. Having been shown as a work-in-progress at AUNTS, Catch, and American Realness over the past year, the complete version will be performed by Talya Epstein, Maggie Jones, Molly Lieber, and Lorene Bouboushian. Additional performers—Luke George, Federico Hewson, and Macklin Kowal—will participate in the gallery installations.

Commissioned by the Kitchen, Forgetful Snow is a dance performed by four women on a large, white shag rug surrounded by white walls. For the duration of the work, the dancers are nude and unaccompanied by music or lighting cues. The piece continuously performs an act of scene setting, drawing the audience into a meditative surround of austere winter landscapes.

Forgetful Snow returns to an early modernist project that occupied the attention of Isadora Duncan and Loie Fuller, namely to dance the essence of elements in the natural world. Although employing drastically different choreographic strategies, one can understand Ring’s work as a nature study. It is a dance about snow—its willy-nilly movements, its blanketing chilliness—and also about what snow stands in for—the stark, the cold, the bleak.

Forgetful Snow takes its title from the first stanza of T.S. Eliot’s The Waste Land, a poem about the loss of meaning and the sterility of the world following WWI. When snow is forgetful, what does it forget? Is it forgetful of you or where to fall or itself? The dancers are at times that which falls and that which is fallen on: the wandering flakes, never sure where they are going and the trees stripped bare and then warmed by drifts of snow. The dancers are a wintery landscape and also four naked, white women on a shag carpet. This play between the images evoked and the materiality of the situation keeps the mood unstable—at times dour and at other times unhinged and giddy.

A desire to strip the dance and leave it unadorned prompted Ring’s choice to have the piece performed entirely in the nude. Yet nudity functions as a costume in its own way, inevitability kicking up associations. The nakedness in Forgetful Snow plays a role distinct from other modes of using nudity in experimental performance. It is not the hippie, neo-ritualisitic primitivism of Richard Schechner’s Dionysus in 69 or the Living Theater’s Paradise Now, the bare-all gestalt intimacy of Anna Halprin’s Parades and Changes, the feminist cunt-posi performance art of Carolee Schneemann or Karen Finley, the glittered excrement and fuck y’all nastiness of Ann Liv Young, or the utopian impulse of multiplicitous naked bodies moving together in Bill T. Jones’s Last Supper at Uncle Tom’s Cabin/The Promised Land. Ring’s nudity is calmer and quieter. It functions almost the way a unitard does in a Cunningham piece, establishing a formalized distance from the world we normally live in. During an earlier period in her life, Ring worked as an art model for a figure drawing class. She became interested in the ways that this task seemed to even out the attention paid to regions of the body, leveling their differences. Forgetful Snow creates a similar atmosphere for the viewer in its nonchalant and unwavering nakedness. 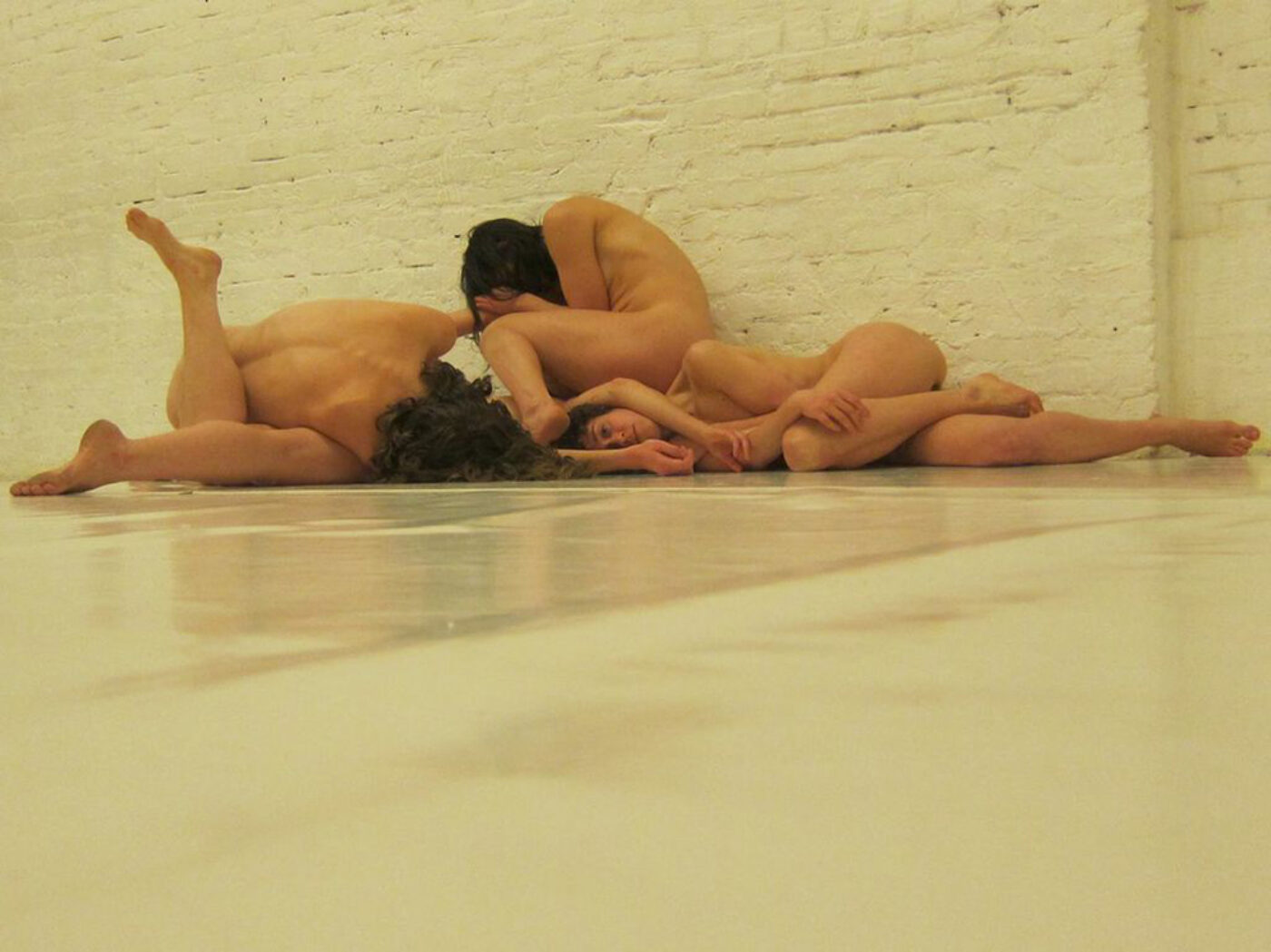 Reflecting on her choreographic history, Ring became interested in a question that she posed to Susan Rethorst while curating the Retro(intro)spective of Rethorst’s work at Danspace Project: “What was the first piece when you understood what your work was about?” Asking the same question of her own work, Ring pointed to several dances that she made while living in Los Angeles in the mid-1990s. She calls these pieces Weather Condition Dances (Glare, Long Rain, Dense Fog) as they sought to capture the weather more in feeling than in form. Forgetful Snow picks up this thread, as it uses the dancers’ bodies to render something about how snow moves and feels. It also bears the mark of her recent piece X (2010), a dance that explored the wildness and rowdiness of group induced experience. Working with three of the same dancers, Forgetful Snow recalls aspects of X yet it has a starker, more minimalist movement palette. It strips, distills, and chills the ecstasy and frenzy of X while preserving its stumbling, feral quality. Similar to X, Forgetful Snow has a dynamic unfolding, as it creates a scene or mood that morphs over the course of the work.

As a choreographer, Ring uses a highly collaborative process, in which the dancers generate the material for the piece through improvising on their own. Ring then directs, selects, and alters their movement—changing the dancers’ facings, putting a sequence in retrograde, separating a duet out into two solos. She thinks of choreography as akin to flower arranging, trying to barely touch the material while making sure it droops in a satisfying way. She composes through happy accident and a Cunningham-esque use of the aleatory processes. She thinks of the piece as not entirely hers, as it intimately bears the mark of her dancers. Her position as the author of Forgetful Snow has less to do with devising its movement and more with bearing responsibility for the work: should her fundraising efforts prove unsuccessful, she, and not the dancers, will go into debt.

Ring generates movement through structured improvisations with the dancers that are recorded and later learned from video. She has the dancers learn each other’s movement, producing an effect similar to playing telephone in that it distances the material from the body that generated it. They work with imaginative, elusive instructions, generating movement from the impossibility or ambiguity of the task. For Forgetful Snow, Ring investigated how the dancers could make landscapes with their bodies and developed criteria for what made a landscape convincing: their stamina of attention and ability to remain committed to what arose. She pursued an aesthetic of corporeal confusion—bodies who do not know how to move or coordinate their actions. Informed by her previous piece Mouse Auditions (2010) that staged the bodily disorientation of Gregor Samsa in Kafka’s The Metamorphosis, she explored movement guided by bodies with agendas that remain illegible or opaque to the dancers. Improvising with these instructions and then learning each other’s dances helped to generate the unfamiliarity of the movement vocabulary. 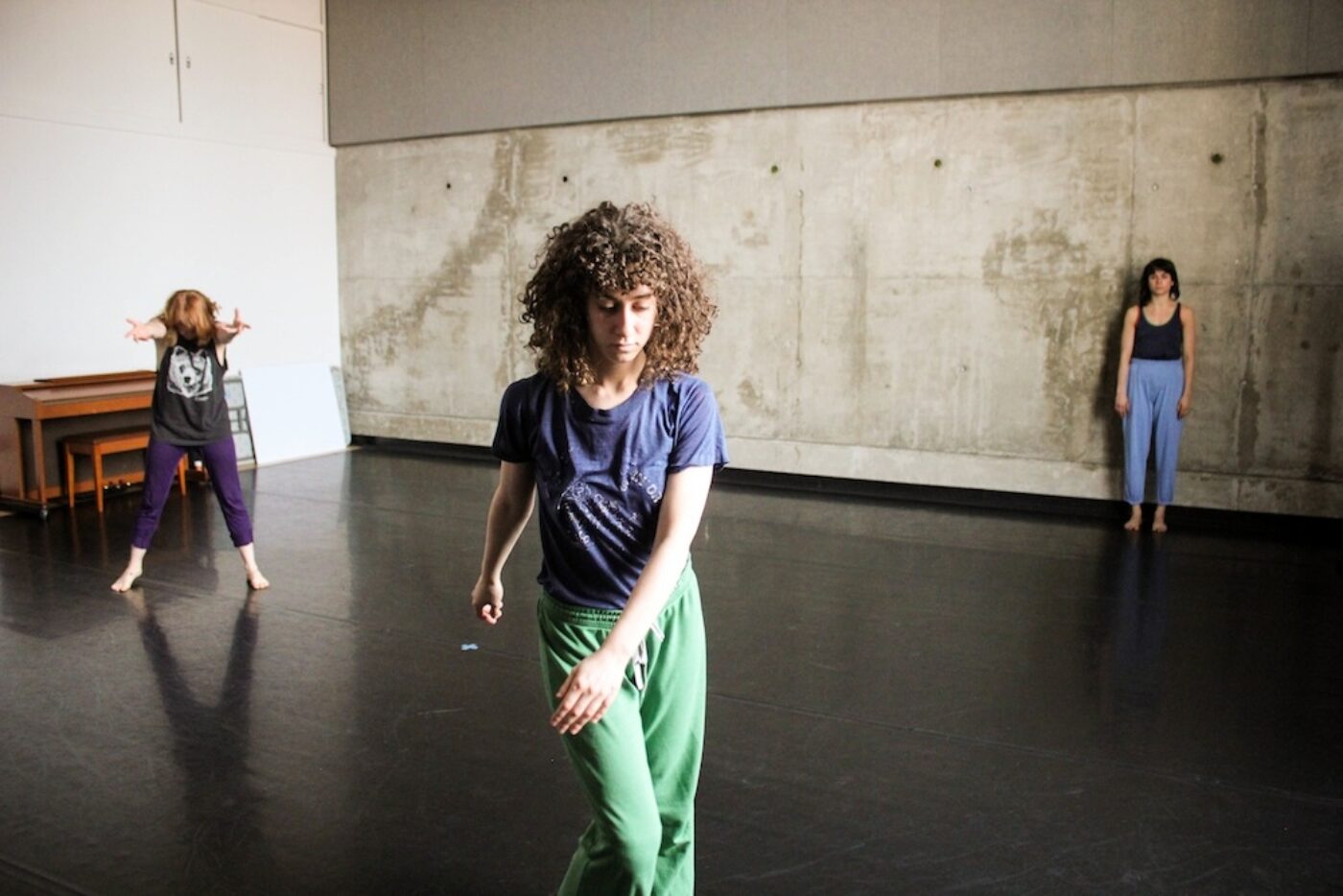 Following the decision for the dance to be performed without clothing or sound, Ring found choreographic elements that would fill the compositional roles that music and costumes normally play. She had the dancers think about the acoustics and musicality of their movement. She added a role that functions to create a visual hum in the room and provide tempo for the other dancers. Dancer Talya Epstein noticed that she missed the sensation of air moving through her clothing when she danced in the nude. So they invented a way to make wind in the room to reproduce the feeling.

The movement within Forgetful Snow is distinctly hard to describe. It gestures towards more familiar steps and movement vocabularies yet exceeds them in its unpredictability. The dancers flop, slap, drop, and stumble with purposive imperfection. They balance in shapes always slightly off-kilter, then break these slower moments with stomps and clunks. Their bodies are loose like Trisha Brown dancers but more discontinuous and abrupt. They extend their limbs but the lines are nonchalant and unfinished, reaching the edge of their kinesphere in an unannounced and lackadaisical manner. The piece shifts from sparse, sustained balances that slowly move off center to galloping, imprecise petite allegro to dissociated, clunky partnering. The lack of repetition and organizing devices gives the dance the feel of twelve tone music composition: erratic and fluctuating yet systematic. Ring is after precisely this unnamable quality, working with movement that doesn’t quite fit into familiar vocabularies.

The dancers swim through space around each other and at times swerve into each other’s bodies. They move together but do not make eye contact, creating a clumsy and lonely mode of partnering. They are not tender or gentle with each other’s bodies; they pursue their own agendas by grabbing or colliding with one another. The effect is like watching icebergs bump into each other, pulled by invisible arctic currents. Their relationships remain ambiguous—who they are to each other and who propels the movement of the others.

In rehearsal, the dancers warm up, review phrases previously learned, and find transitions between sections. They note where pieces are missing and find tags or prequels to their set material. They develop means of cueing sections off of each other: one dancer syncing with the eye movements of another. Ring helps to coordinate the timing and spacing of dancers: slowing them down, bringing them into closer proximity, and navigating how they can get lost and out of control with their movement. They develop tricks to avoid kicking each other in the head. The group discusses the performances that occurred over the weekend involving unwelcome audience participation, the ankle problems of a dancer who has not had a day off in three weeks, and how to approach the final fundraising efforts to pay fees not included in the Kitchen’s commission. Working on the dance involves this synthesis of retaining changes to the dance, thinking through the economic dynamics of contemporary dance, and caring for each others’ bodies. 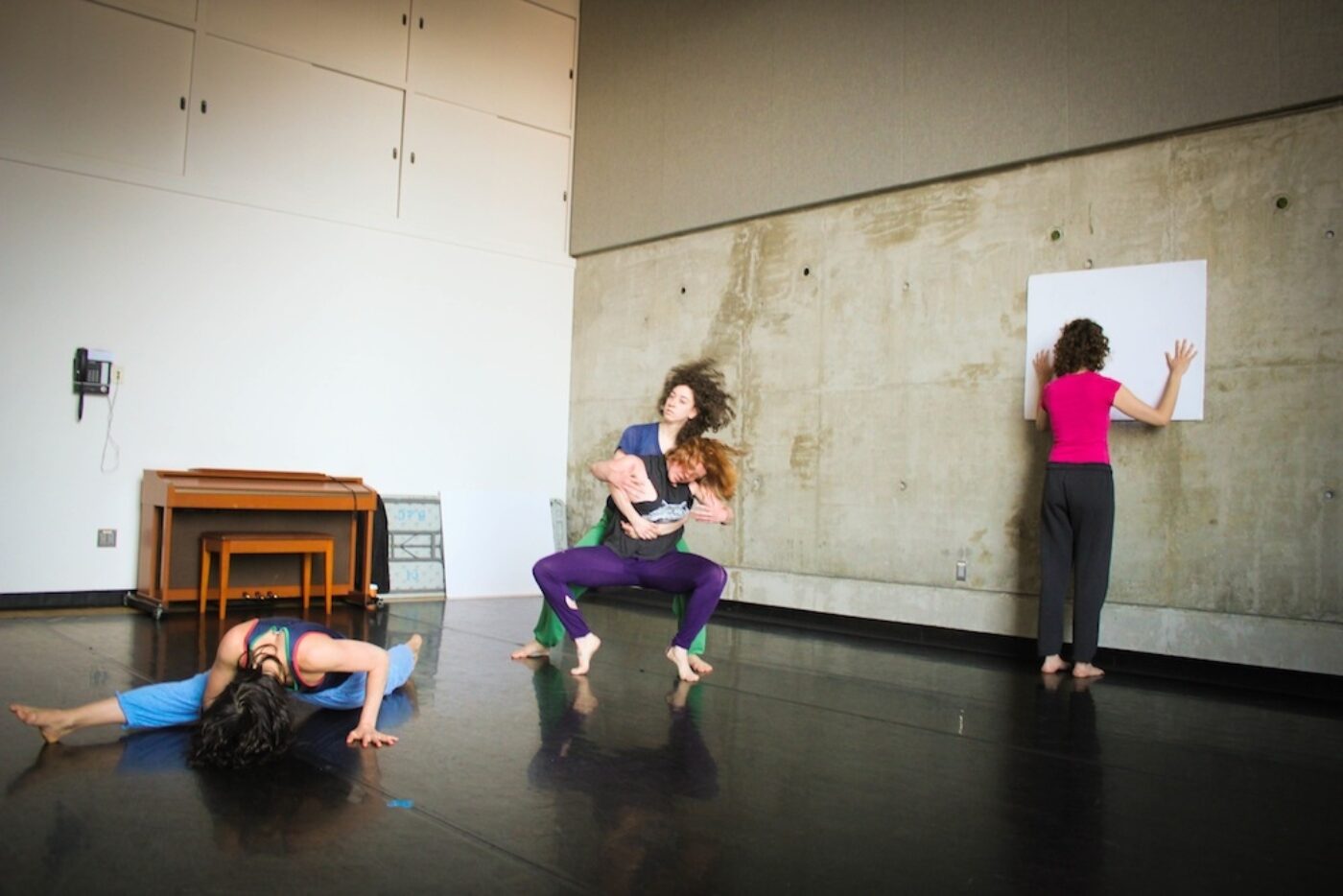 Forgetful Snow both reveals and conceals: they take it all off and show everything but keep much of the dance’s logic opaque. This play between revealing and concealing mirrors T.S. Eliot’s counterintuitive image of being warmed by winter: snow covers and protects things yet chills and strips them. If the piece creates a landscape with its white carpet, white walls, and white women’s bodies, one wonders about what lies under its snow, what colors and tubers remain lodged beneath it. Taking up the cultural phenomenon of white female nudity, Afro-pessimist writer Frank B. Wilderson III reflects that:

The flaunting nudity of White people in cinema, and in civil society more broadly, manifests itself as one of White feminism’s many dramas. What White nudity signifies, what politics the contestation and performances of its codes generate, whether exploitative (see Judy Chicago’s screed on pornography) or liberatory (elevated by the White feminists cry: it’s my body, I’ll do what I want with it)… .these are the tiresome and aggravating questions through which White women (and men) perform their intramural dramas.1

Wilderson’s observation makes clear that the question to ask about the nudity and starkness of the piece is not its exploitative or liberatory quality for the dancers, but what mechanisms and processes outside of the dance have rendered the world sterile and snowy.

Melinda Ring’s Forgetful Snow will premiere at the Kitchen May 8th and run through 17th, 2014. Tickets are available here.

Olive Mckeon is a doctoral student at University of California, Los Angeles, working on a dissertation on political economy and modern dance history.

Mariana Valencia on her sculptural arrangements of bodies and objects, teenagers in parking lots, and Bushwick sunsets.