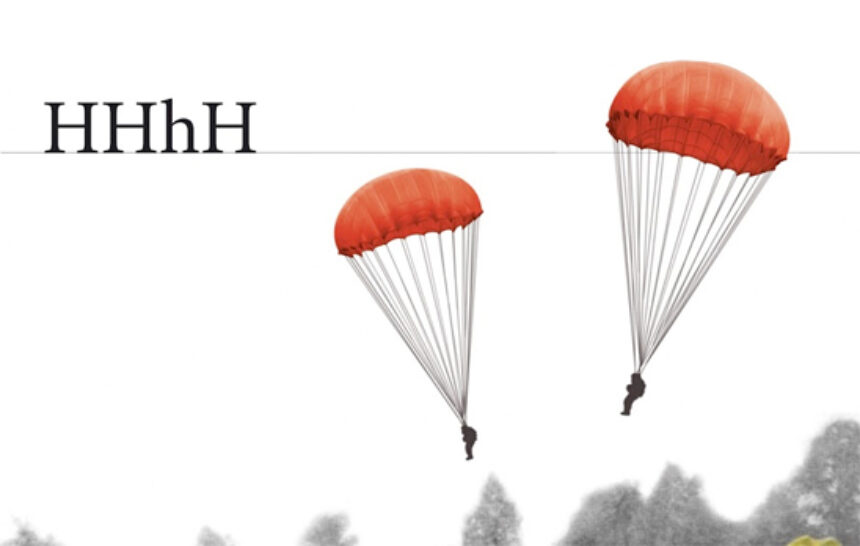 Reinhard Heydrich was known as the Blond Beast, the Butcher of Prague, and Heinrich Himmler’s right-hand Nazi. Laurent Binet’s HHhH—Himmlers Hirn heisst Heydrich (Himmler’s brain is called Heydrich)—is at once an exhaustive historical novel on the rise and fall of a fundamental figure of the Nazi Party during the Holocaust and a reflection on the efforts involved in writing such a compelling and significant historical tale. An impressive debut, HHhH was awarded the distinguished Prix Goncourt du Premier Roman Prize.

The narrative both fascinates and disgusts; Heydrich’s career in the Third Reich was overwhelmingly “successful.” Once he joined the SS as a foot soldier, he rose startlingly quickly through the ranks, and went on to hold many powerful office positions where his actions greatly enhanced the control and reach of the Nazi government. In many situations, his ruthlessness was unsurpassed; on occasion, no mercy was given to Aryan citizens who disobeyed the government. He served as the director of the Reich Main Security Office, which oversaw the SS and the Gestapo, and where he founded the SD, an organization of spies in charge of exterminating resistance efforts. He acted as the chairperson at the Wannsee Conference where the Final Solution plans were laid out and was also a main organizer of the infamous Kristallnacht. For a time, he was president of the international law enforcement agency, Interpol. But, his most powerful position was as the Deputy Protector of Bohemia and Moravia, where he exterminated almost all of the resistance, lived like a king while he operated out of Prague—the largest castle in the world and the seat of the Czech government—and ultimately met his demise.

While Binet chronicles Heydrich’s unstoppable military progress, he also includes anecdotes involving his personal life that contrast with his professional façade. In 1931, Heydrich, a navy lieutenant on his way to achieving an impressive military career, was dishonorably discharged for inadvertently impregnating the commander in chief’s daughter; at the time he was engaged to a girl from the aristocracy. In addition, Heydrich was known for the explosive rage that would unexpectedly overcome him, even as a result of such a minor event as losing a friendly fencing match. Binet’s portrayal of Heydrich also shows him as an easy target, a man who took himself too seriously. In an effort to show off his piloting skills, Heydrich became lost behind enemy lines, creating a panic at the headquarters. Also related is the occasion on which Heydrich was accidentally recorded during a visit to a brothel popular among SS officers. Binet found the journal of the forgetful subordinate in charge of the tapes (who also received his wrath), which included an entry about Heydrich’s apparently “laughable” performance.

In September 1941, Heydrich was promoted to be the Deputy Protector of Bohemia and Moravia after Hitler removed President Edvard Beneš from office. In exile in London, Beneš created an assassination plan, Operation Anthropoid. With this plan, Jan Kubiš and Jozef Gabčík, a Czech resistance fighter and a Slovak factory worker, respectively, are introduced as the parachutists who derailed history: These two men, who are profiled as the real heroes of the book, assassinated Heydrich in broad daylight in front of dozens of witnesses in June 1942. The assassination attempt reads like an absurd thriller: A tram car pulls in front of one parachutist, a gun jams, an explosion erupts, the car driver attacks, and witnesses become involved. Despite this mayhem, the parachutists succeeded, and Heydrich died from his wounds. The retribution was brutal. Several families who had hidden the two men are murdered, and Kubiš and Gab?ík and a few other London parachutists barricaded themselves inside a church for over eight hours while over 800 SS soldiers attacked them. The entire Czech town of Lidice was annihilated or sent to a camp by a squad from Heydrich’s hometown, and 10,000 innocent Czechs were shot. Three concentration camps were named after him. Despite the horrible aftermath, Heydrich’s death was not only a great accomplishment for the Czech Resistance and the Allies but hope for the end of the occupation and the war.

Binet chronicles his obsession with Heydrich and the events surrounding his assassination, but he also includes chapters about researching and writing the book (he calls it an “infranovel,” a book inside his book), and the effect the project had on his life. In the chapters where he reflects on historical writing, Binet wonders to what extent his occasional fictionalization of actual events is correct. He also compares other fanatics’ research to his (the color of Heydrich’s Mercedes being a point of discrepancy). He admits that the subject became an obsession, and that “I have the impression that everything in my daily life is bringing me back to this story.” He watches films, reads books on and by people who play minor roles in the book, and took vacation time to visit Heydrich-related historical sites. He even jokes that a relationship disintegrated as a direct result of his obsession with the work.

HHhH is fascinating not only because of the subject matter, but also because of the immense amount of detail Binet includes. The book transports and enraptures. It also impresses upon the reader the legacy of that history. His reflections on how to write the book with thoroughness and integrity and the effect of the project on his life are examples of how important the subject and the consequences of the history are to him. Heydrich’s life is not as documented as those of other high ranking Nazi officers. By researching and publishing HHhH, Binet reminds the reader that history has myriads of layers, but that they are all relevant in our contemporary world.

Ashley McNelis is a Brooklyn-based writer and photographer from Pittsburgh.