The effects of incarceration.

Jan 11, 2018
Facebook Twitter Email
Between Then and Now: on Kara Walker and Ta-Nehisi Coates by Rabia Ashfaque 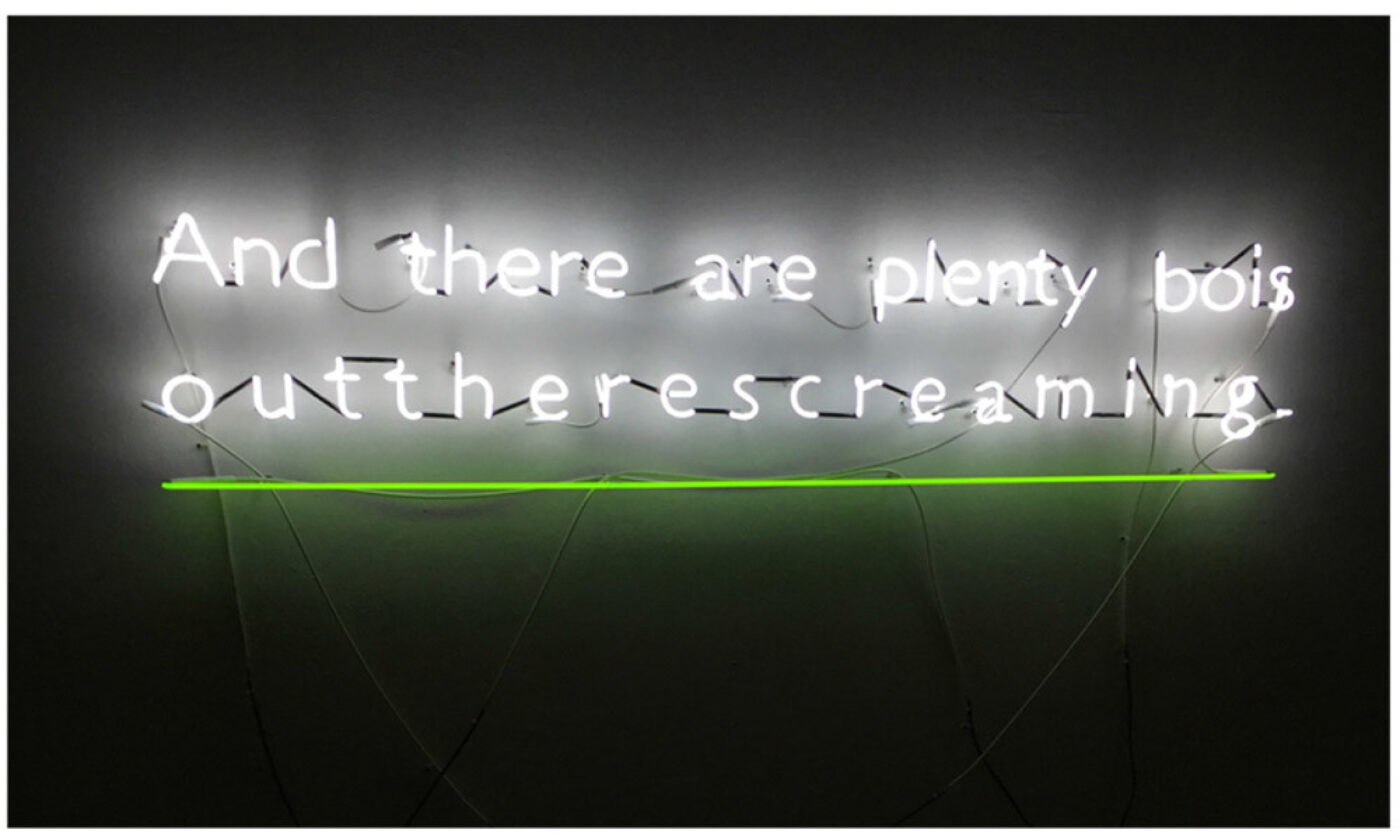 The subject of incarceration in the United States, with the largest prison population in the world, has always been fraught with contention, from racial and religious discrimination to the shortcomings of a convoluted criminal justice system fraught with red tape and the abuse of power. The recent wildfires in California, which were fought in part by inmates in exchange for leniencies in their sentences, revived the debate on economic abuse in prisons, specifically on the use of inmates as cheap labor, whether for firefighting or the enrichment of multi-million-dollar corporations.

Sable Elyse Smith’s Ordinary Violence, on view at the Queens Museum, offers a sensitive portrayal of the artist’s relationship with her incarcerated father, whom she has been visiting in prison for two decades. Smith painstakingly investigates the effects of captivity and submission to authority, both on the incarcerated and their loved ones, while also exploring notions of labor—physical and mental—and the toll they take on both parties. Smith’s poetic work, which employs fragmented words and images, can in part be seen as an attempt to revert the prison statistic back to the human it represents by highlighting the “invisible, imperceptible things that transpire between people and bodies,” as she described it during an interview with this writer. “I use my father’s narrative as a framing device” to highlight the violence and trauma specific to the environment of a prison structure and its debilitating confines. 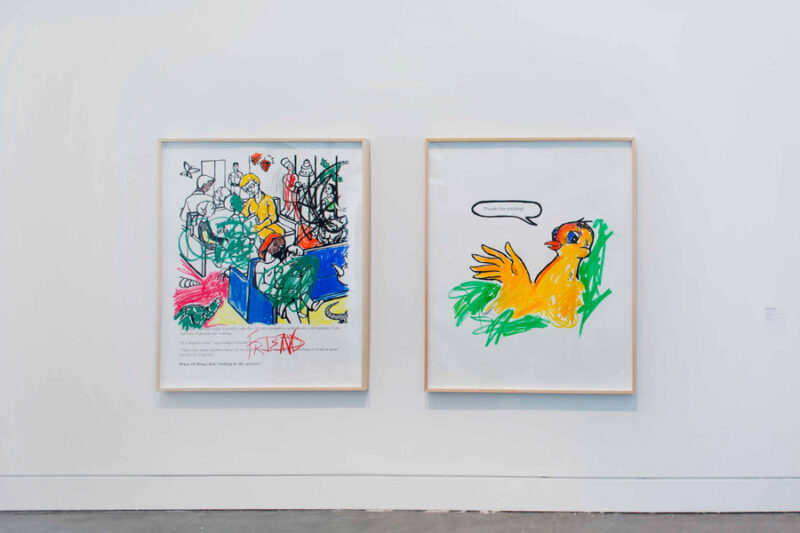 Two enlarged prints from a children’s activity book come into view as one enters the exhibition. “I’ve had that book for at least three years now, and every studio or residency I go to, I take it with me and put it on my desk because there’s something terrifying about it,” Smith reveals. Masked beneath the seemingly innocent, colorful scribbles are images of enforced positivity, carefully engineered to depict a controlled sense of the norm. The heartbreaking image on the left depicts a visiting room occupied by incarcerated parents reading books and exchanging fond glances with their visiting children while a uniformed guard stands at the back. A carefully worded narrative from a “Judge Friendly,” who feigns sympathy with the book’s intended audience by admitting that “it is difficult to wait” to see your loved ones, plays against the image and the endnote asking: “What 10 things don’t belong in this picture?” This attempt to divert the child’s attention comes across as almost sinister, given the fact that there are both ten creatures/objects alien to the environment, as well as ten humans, in the picture. The chirpiness of the “Thanks for visiting!” uttered by a bird in the image to the right is an unmistakable double entendre that calls out the entire setup for what it is: an ill-devised system that fails the people it seeks to rehabilitate. 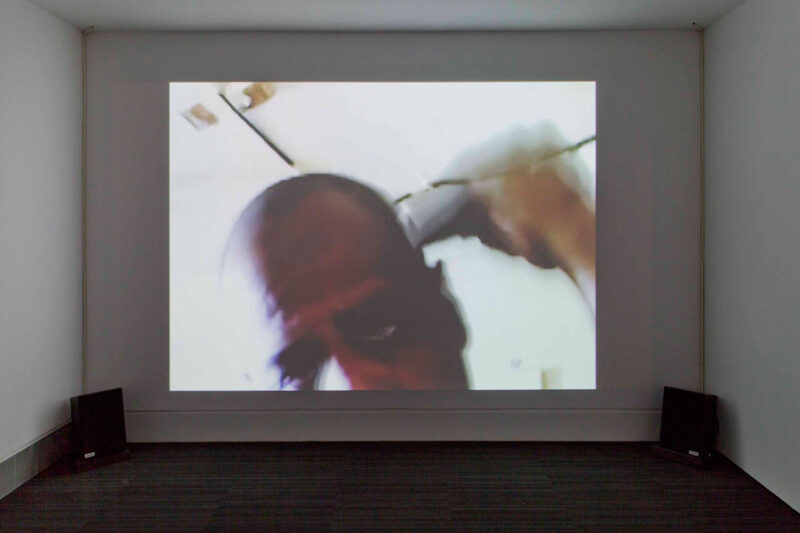 “And there are plenty bois out there screaming,” reads the neon text in Landscape I, 2017, embodying Jenny Holzer’s anguish and Glenn Ligon’s illumination. A nine-channel video installation on the opposite end of the room plays snippets of a person being processed through the criminal justice system, spotlighting the various negotiations between the inmate and figures of authority along the way. “This is the memory that got me thinking about the small, imperceptible violences I experienced visiting my father,” Smith admits. “As soon as I crossed the threshold, the architecture…automatically, subconsciously, I start changing everything about myself. My posture. The tenor of my voice. Everything altered ever so slightly. So then I started to wonder about that. I walk through this building, and it has this power over me that I don’t even stop to question.”

On the wall opposite the images from the activity book are two photographs titled 7665 Days and 7665 Nights (both works 2017) that are family portraits taken in prison. While the faces have been blocked out by horizontal black strips, we know the people to be Smith’s family visiting her father. The photographs are taken in front of murals depicting resplendent scenery. The simple pleasure of the moments captured in these images is dimmed by the knowledge that the murals are painted by prisoners—odes to the freedom that was once theirs, but no more. Like the visitation room in the earlier work, the murals represent an escapist delusion. Because visitors are not allowed to pay for these photographs, the prisoners must pay for any photographic memento themselves. While earning a few cents per hour for prison work, inmates must pay several dollars for each picture: a hefty price levied on a loved one’s cherished image. Cost of image, of life, of human relationships—all are reduced to a monetary price in this instance, raising questions pertaining to the assignation of value itself. 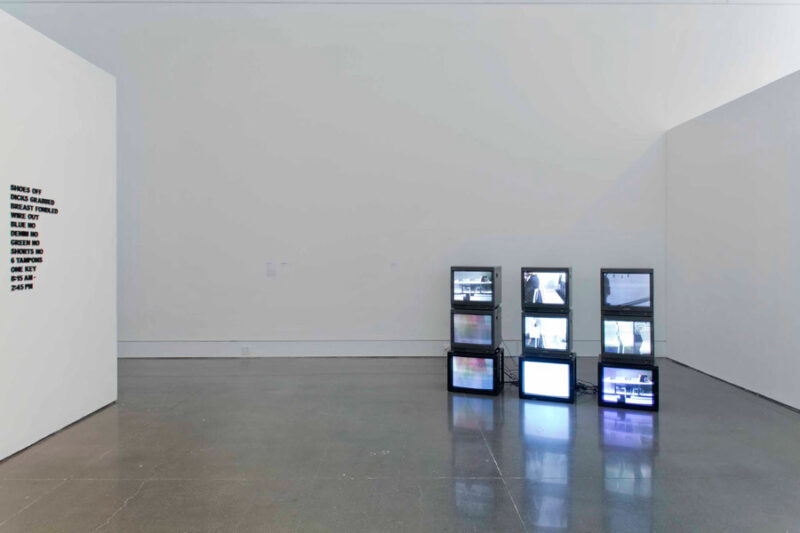 Two single-channel videos, How We Tell Stories to Children, 2015, and Men Who Swallow Themselves in Mirrors, 2017, end the exhibition with a powerful juxtaposition between Smith’s father’s poignant narrative and the story of young black men swallowed up by a system that has always worked against them. The videos impart a final warning: in a world where race and class continue to define boundaries of existence, we are setting ourselves up for endless heartbreak.

Ordinary Violence is on view at the Queens Museum until February 18, 2018. 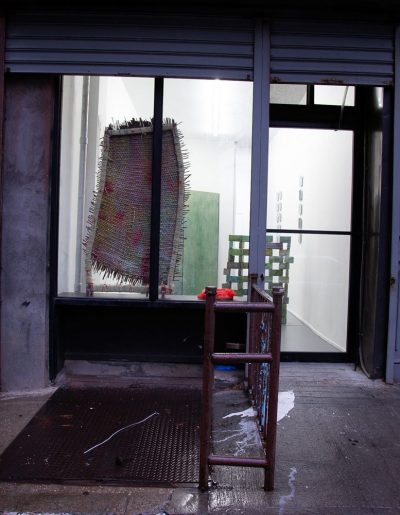