Warmer: A Collection of Comics About Climate Change for the Fearful & Hopeful by Matthew Thurber 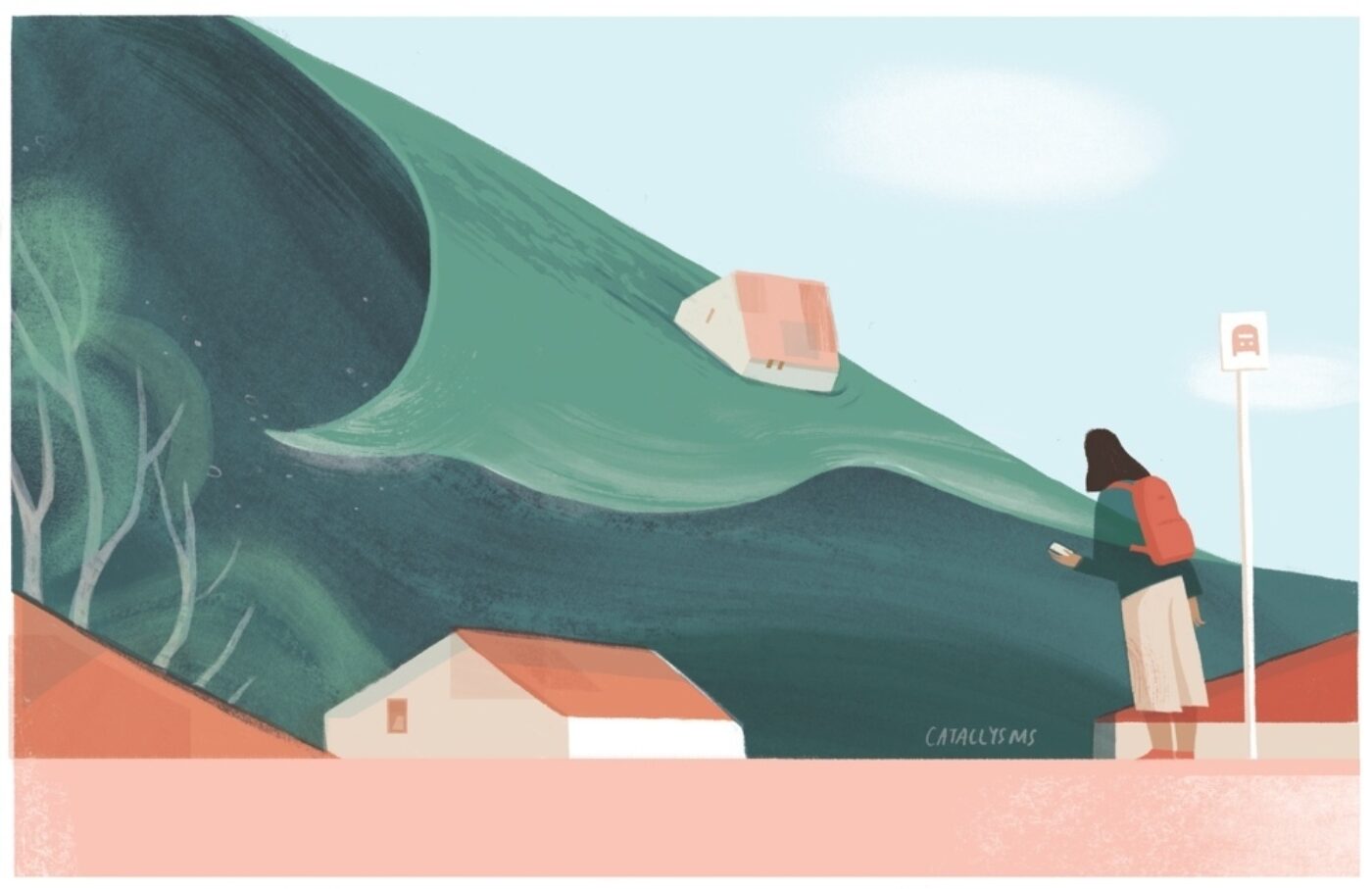 Comics have a good chance of surviving ecological disaster. Unlike, for example, blue-chip video art, there may be a place for hand-drawn sequential graphics after floodwaters recede. The post-collapse cartoonist might be employed to design insignias for new tribal groups, hand-letter signs for shantytown bars, create hagiographic tapestries celebrating the exploits of new self-designated messiahs, and so on.

But what sort of comics should be made right now, under the conditions of imminent ecological doom? A new anthology, edited by young cartoonists Madeleine Witt and Andrew White, attempts to respond to a crisis that is incomprehensibly enormous.

A natural approach is to diagram the situation, to provide evidence and emulate the scientific method, albeit intercut with scrambled subjectivity. Will Cardini’s comic is like a heatstroke-addled infographic. Scribbly Photoshop drawings perfectly describe the narrator’s move to Kansas City after “the oppressive Texan heat muffled my mind.” But there’s little escape. “Who will survive this millennia-long summer?” he wonders. In response, red ants swarm over his brain. In a visual jolt of gore, Ellie Schmidt’s piece juxtaposes deer-skinning instructional photos with captions that form a run-on sentence about love and obsession. Just as we can’t help falling in love, we can’t seem to stop killing and eating animals. Alyssa Berg and Catalina Jaramillo collaborate on an informative but perhaps too-brief story about a scientist studying the changing migration of humpback whales. 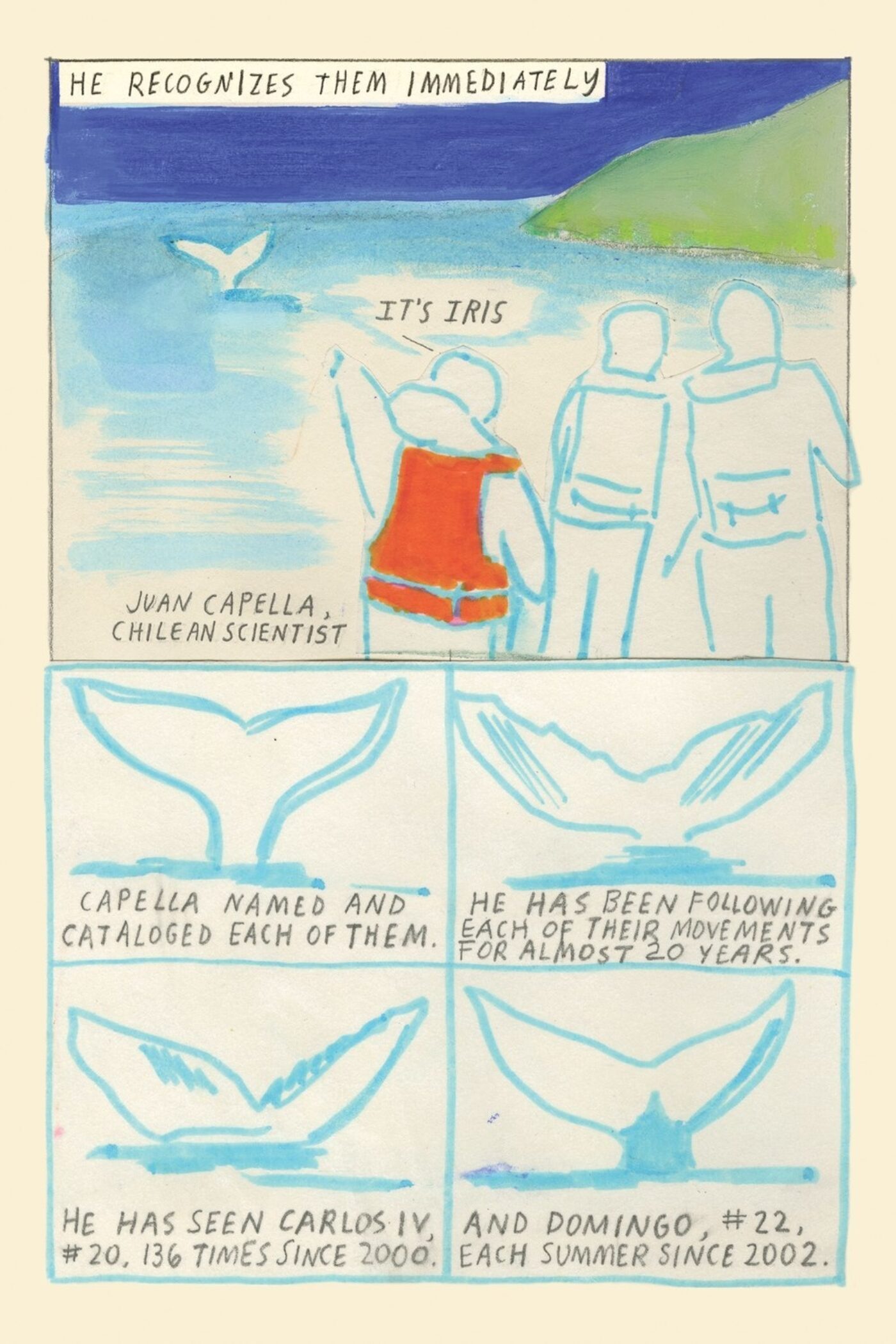 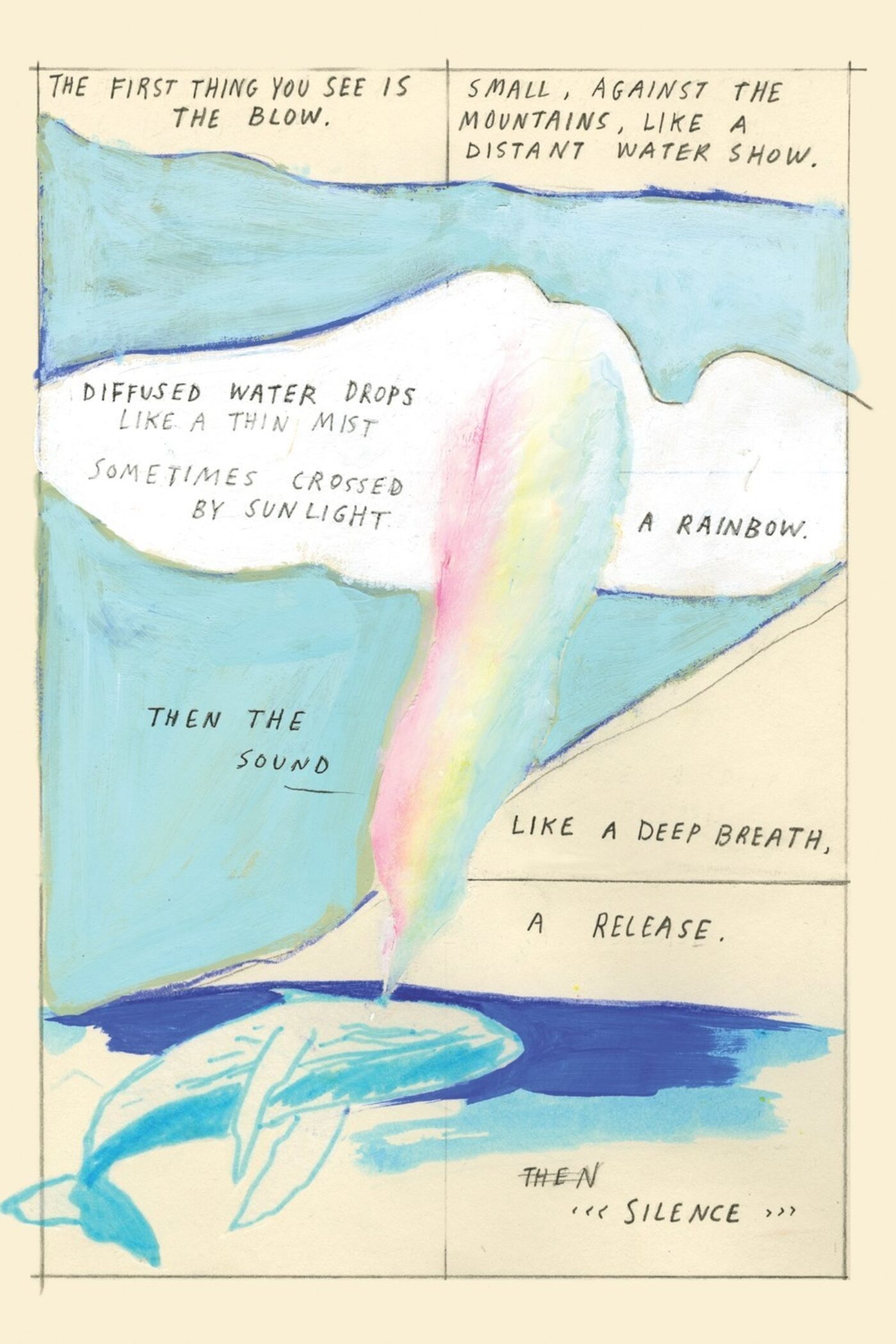 An empathic connection is sought by a number of works here: Graeme Shorten Adams’s tasty graphite drawings accompany text addressing the reader directly. White contributes a contemplative and moving piece. It reads almost like a guided meditation. White’s images invite us to make connections between the local and the global. A match goes out, a sink overflows, footprints disappear, and our bleak relationship to the planet is confirmed. In two simple marker-colored pages, Tor Brandt’s iceberg comic devastates, pointing out our folly in expecting ice and snow to return automatically like the rising sun.

A situation beyond logical comprehension invites responses beyond language, without words. Warren Craghead makes an Art Brut comic about a giant destroying the landscape, throwing a tantrum, and then collapsing—a portrait of America’s psyche as a destructive brat. Wenting Li’s character witnesses the mother of all waves while waiting at a bus stop. Nick Soucek’s ink-and-wash drawings are the most refreshing work in this volume. The meaning of the piece is implicit through its chosen imagery: a plastic bottle floating in the ocean, a highway overpass, an aerial view of a generic suburb.

Warmer contains a high ratio of comics whose text floats away like iceberg chunks from the drawings, eluding any straightforward connection. Caitlin Skaalrud’s compact piece depicting two young women navigating the post-collapse landscape—hunting a rabbit and roasting it, taking shelter from a lightning storm inside a trash bag—is efficient in a go-bag way, befitting its survivalist subject. However, the poem that drifts over the images seems extraneous and sentimental in comparison to the excellent pacing and saturated visuals. Jonathan Bell Wolfe’s digital scribbles, blocked-out shapes, and smears float like chemical clouds over his ruled lines and lumpen suburbanites. In Maggie Umber and Raighne Hogan’s “Pollination,” sloppy and pleasing images of bees working on flowers conclude with a scrawled message about early blooming, a symptom of global warming. L. Nichols wonders if we can learn to live with trees, questions bouncing around in the branches.

In another comic-poem, this one from Oliver East, sketchy cityscapes, traffic, aircraft, and factories are accompanied by oddball lines like “punch drunk from t’blows I plow on regardless,” which float over digital renderings of the implacable garbage of late capitalism. Witt and Anya Grenier’s unpunctuated comics essay traces the continuity of the simple act of making and breaking bread. Kimball Anderson depicts, in pleasant watercolors, a person’s walk along the beach and their discovery of a dismantled crab and a plastic pen cap, as their gloomy, disorderly thoughts hover in disassociated captions.

I didn’t expect to find any revelatory answers to climate change in this volume, but I did hope for a wider spectrum of approaches. Perhaps my hope for more hard science, more evidence, more objectivity is a futile desire for an easy solution. Most of the artists in Warmer confront climate change through abstraction, as if the specifics are just too overwhelming to contemplate. Their bewilderment in the face of what appears to be an insurmountable problem is understandable. Yet this is perhaps not the time for poetic indirection, but for identification, for humor, for specifics, for calls to action, for reaching beyond a known and safe audience. This anthology kind of reminds me of recycling: it makes you feel better—and indeed, it helps—but in the grand scheme of things, it won’t save the world.

Matthew Thurber, the author of 1-800-MICE, INFOMANIACS, and Art Comic, lives in New York City, where he teaches cartooning at Queens College. 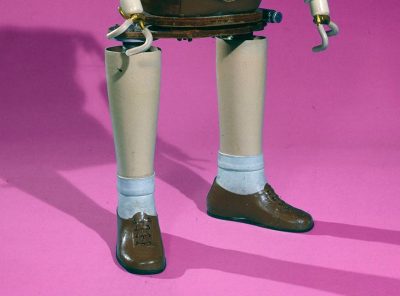