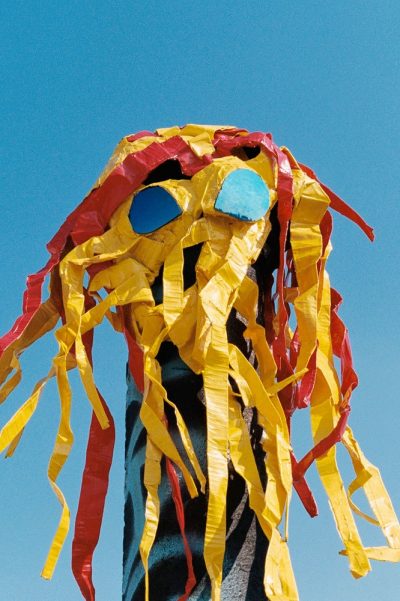 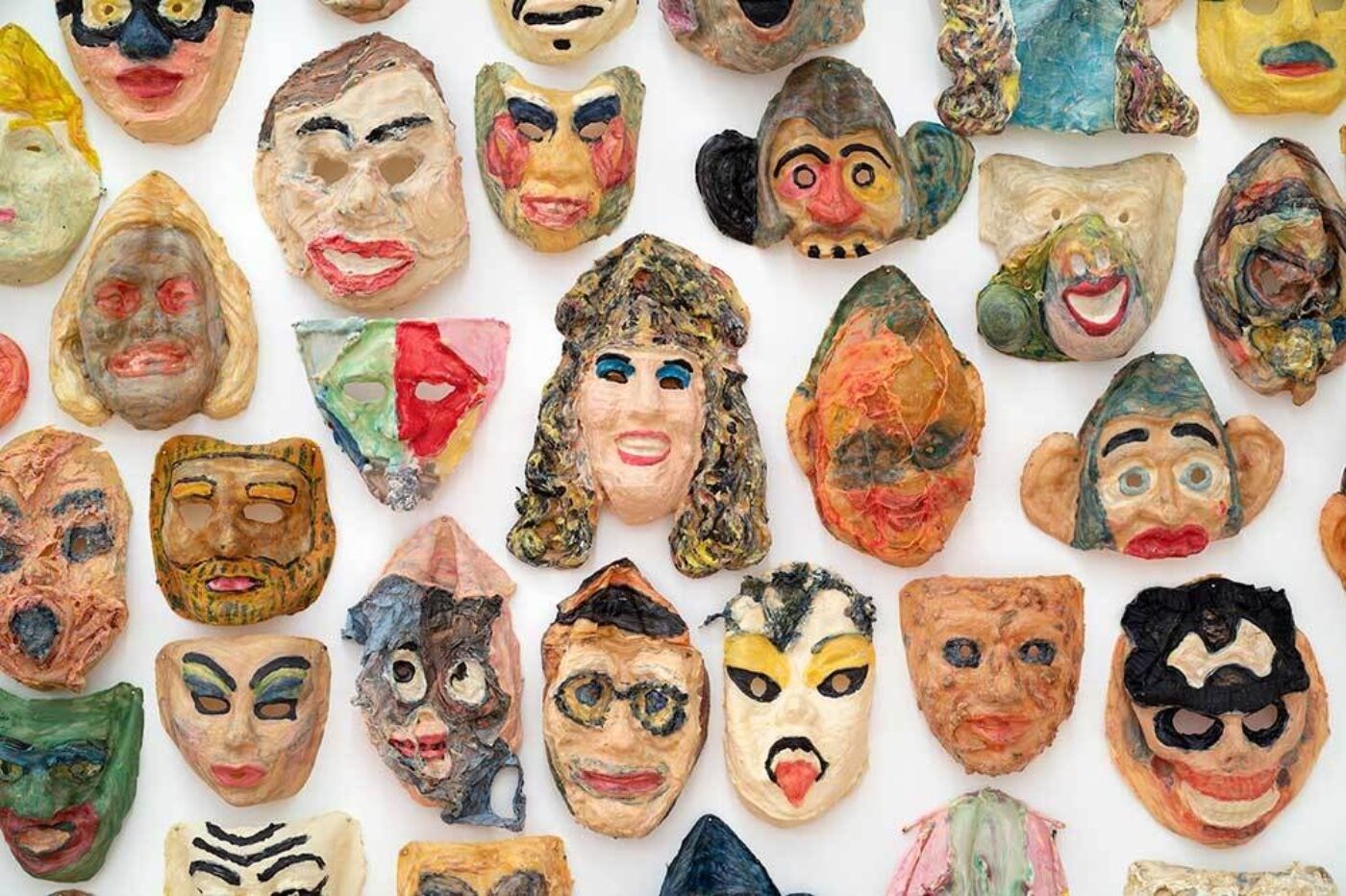 Michael Mahalchick and I have been friends for fifteen years. His fearlessness, integrity, and spooky imagination are inspiring. We both show at Canada in New York City, where he is currently having his sixth solo exhibition. A substantial book about his twenty-year career was also recently published by Canada.

Mahalchick’s work is lush and perverse. A performance artist, dancer, and musician, he primarily makes sculpture and wall works out of latex and found objects. His show features hundreds of colorful latex masks cast from commercial plastic masks. Hung on the wall in an enormous conglomeration of distorted, gory faces with manic grins and bulging eyes, they are reminiscent of James Ensor’s freakish crowds.

Elisabeth Kley You spent the pandemic tirelessly making masks for your show. How did you do it?

Michael Mahalchick Layers of colored latex were painted over store-bought plastic masks, some depicting known personalities like Donald Trump, Hillary Clinton, and Vladimir Putin. The insides are thus reverse casts of the fifteen to twenty original masks I repeatedly used. Most of the resulting latex masks aren’t obviously identifiable, but a few resemble characters including Divine and the QAnon Shaman.

EK Do you think about the emotions each face conveys? Does an interest in bizarre popular culture feed your choice of masks?

MM The masks are distinct yet part of a larger whole. The relationship of the individuals to the group and ideas of replication are the exhibition’s point. Unnatural skin colors like green and blue express different emotions. Of course, the bizarre aspects of popular culture are compelling. Which is better: a room populated with four average people or a room with a lizard person, a Karen, a drag queen, the devil, and Trump?

EK What does latex mean to you? Are you interested in its sado-masochistic connotations? Do you like the way the posters seem invaded by a fungus?

MM I love latex for its metaphorical implications. Its skin-like quality implies the body, and, like skin, it can be a barrier. It protects, but it’s soft and elastic. Latex is impermanent. Like us, it ages, becomes delicate, and slowly disappears. I do enjoy the implied sexuality, particularly in regard to condoms. Fetishism has to do with accessing a different identity, and that’s probably also related.

Latex’s smell is sensual. I’ve always been interested in scent as part of art. It’s funny that you see the poster’s latex as invasive. To me it protects the paper from moisture, mold, and mildew. The way latex yellows and flakes as it ages does resemble fungus. 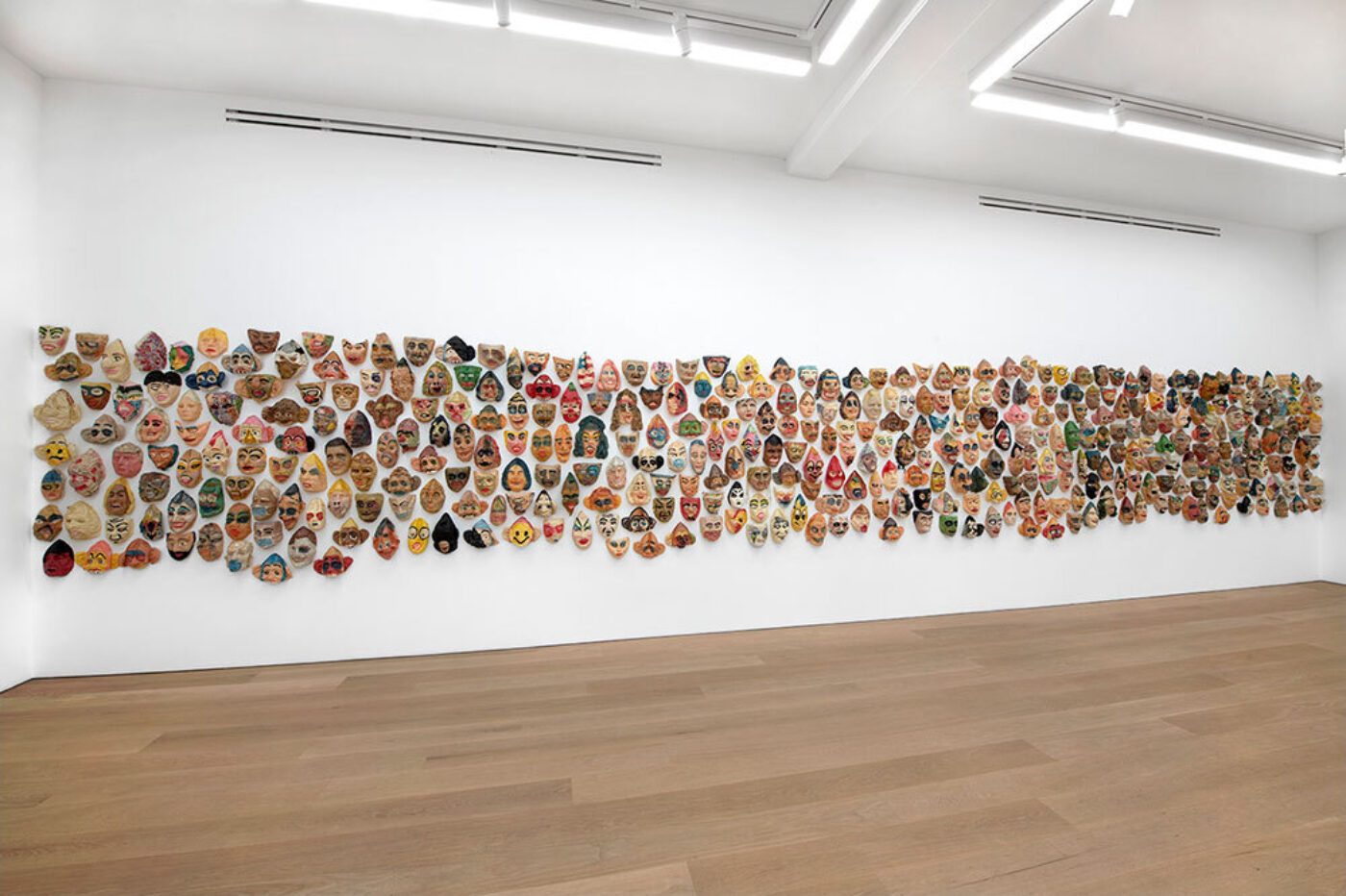 EK Your earlier shows at Canada featured fabric sculptures. When did you start adding other materials?

MM By my second show I had begun to bring found objects into the work, but they were covered and bound with fabric. It took until the fourth show for me ditch the disguises and focus on the things.

EK As if they came out of hiding! Do you pick objects up off the street? The Ugandan artist Leilah Babirye uses trash in her work because gay people in Uganda are called rubbish. Do you relate?

MM Absolutely! Prior to the latex, all my materials were scavenged. The metaphorical relationship of being gay to being discarded is a reason why I use what people call trash. Queer people have celebrated valuelessness in order to survive in a culture that doesn’t want them to exist. I stopped covering the found objects to assert their inherent dignity without “dressing them up” to make them more acceptable. Like queer people, they are perfectly good as they are.

EK How do your performances relate to your two- and three-dimensional work? Do your impermanent materials relate to performance’s ephemerality?

MM Performances and objects come from the same thinking, but performance is harder because you must make yourself vulnerable. Of course, there is a relationship between my interest in impermanent art materials, unstable sculptural arrangements, and performance’s ephemerality. To me, my objects do a long, slow performance. You exist with them in the moment, but when you next encounter them, they’ve changed.

EK Your performances often involve feats of endurance. For the opening of your last show, you stayed face down on a massage table with a mask on the back of your head, staring for two full hours through a hole at your reflection in a bucket of water. How did you feel after that?

MM My performances often feature altered states. During and after the Narcissus (2016) performance, my feelings were quite intense. When I finally stood up, my face was puffy, my eyes were red, and I felt disoriented, as if I’d returned from a different world. Reentry was difficult; walking and talking didn’t come quickly. 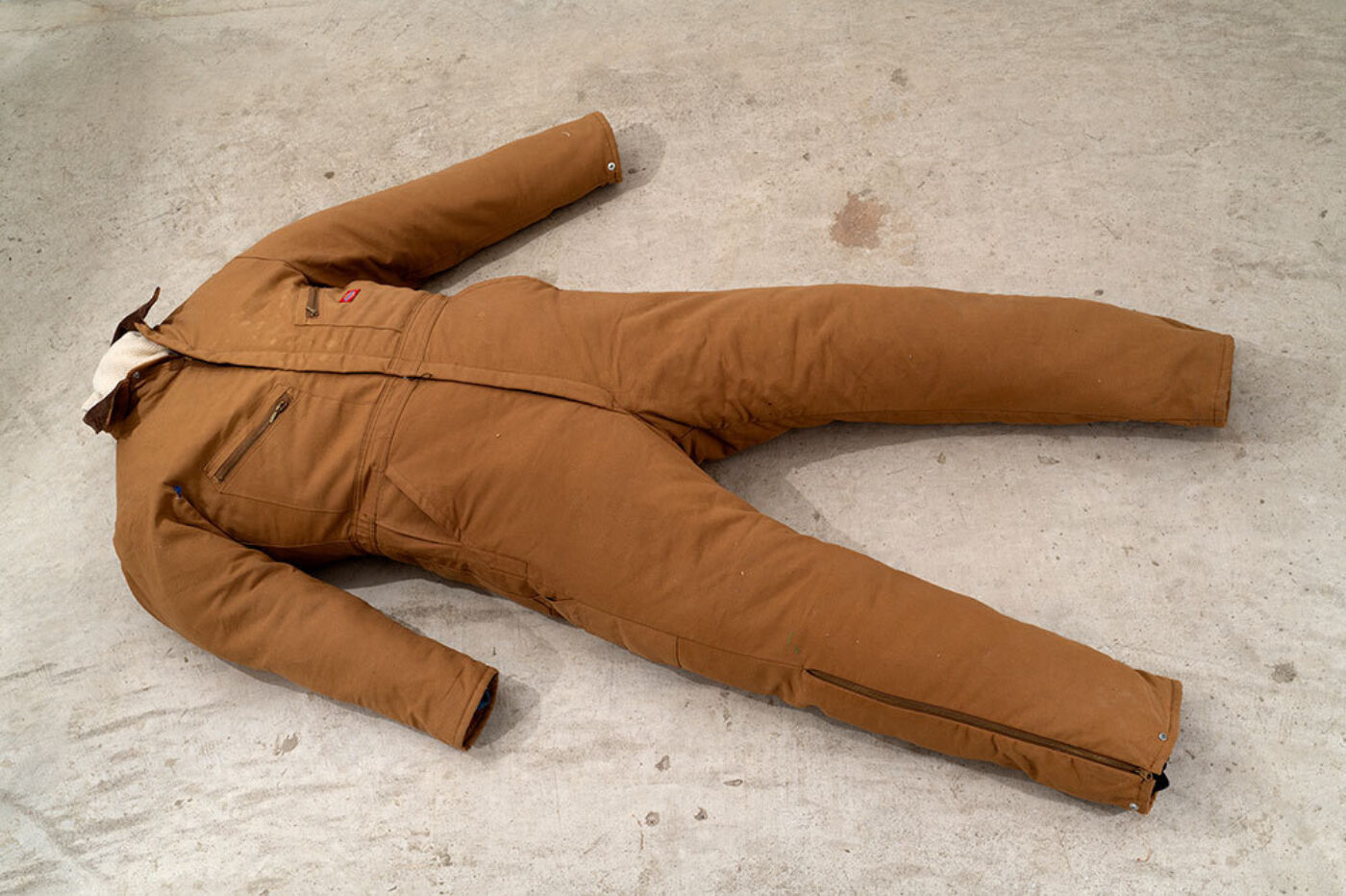 EK What was your childhood art?

MM Crafty projects that transformed household detritus into something new: using an old bleach jug for a sculpture of a pig, folding a magazine’s pages into a Christmas tree, gluing together clothespins to make tiny chairs, and using yarn and wire hangers for wreaths.

EK Didn’t you also love to be scared? And what about KISS? I know you performed as a child and at art school.

MM I loved horror movies as a child, and I still do. When I was eight, an aunt took me to see The Shining at the movie theater. I loved it. Watching The Exorcist with my uncles gave me nightmares for weeks, but I was hooked! The intensity of the feelings horror movies aroused made me less scared of feeling things in real life. Horror movies made me brave enough to know that whatever frightened me could be defeated.

And what kid in the ’70s didn’t love KISS! Their cool costumes and make-up turned them into superheroes. Also, they were heavily marketed to children. Their tapes and records came with special stickers and tattoos. There were lunch boxes, Halloween costumes, and comic books printed with their actual blood. I remember wetting my finger and running it over the red printed sections to try and make the blood come up. It was scary but carried meaning beyond the images.

I remember performing in a third-grade talent show. Wearing a shirt with a glittery bear on it that said “all you need is hugs,” I sang along to a recording of “Escape (The Piña Colada Song).” Seeing an eight-year-old in a Catholic school sing about “making love at midnight on the dunes of the Cape” must have really had some charm, as it went over great! The parish priest loved it!

I performed often at art school. The first time, I reenacted a childhood memory. Longing for a baby chick like the one my mother got for Easter when she was small, I stole an egg from the refrigerator, placed it in a nest of grass, and squatted on it, trying to hatch myself a baby! It didn’t take long for me to fall, leaving the ass of my pants covered in egg. The new version lasted much longer with the same outcome: no chick.

EK When you worked at your father’s bar and nightclub you organized karaoke nights and strip shows. Later you put together performance programs at Canada. What does curating mean to you?

MM Creating performance evenings is a lot of work—stressful, but rewarding. You have to consider performer and audience expectations. It’s a challenge to be sensitive to how the program unfolds and allow different styles of performing to shine, but when it goes right it’s exhilarating. 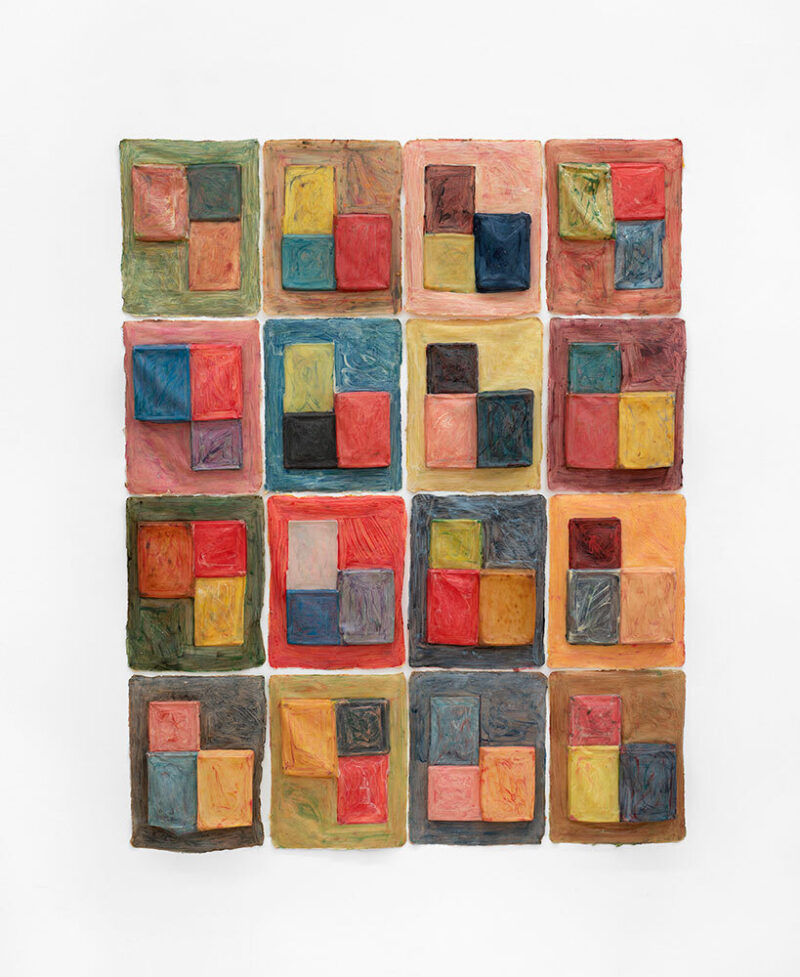 EK You taught art to developmentally disabled adults in Los Angeles after you finished at CalArts. For me, teaching painting to senior citizens in the Bronx ended ideas about talent’s importance. Anyone can be an artist.

MM After two years of CalArts’s theory-driven program, the Exceptional Children’s Foundation Art Center was a revelation of pure, unfiltered creativity. David, for example, made beautiful crowns and scepters out of the lowliest materials—mostly scavenged aluminum foil. I wrapped my lunch in foil for him every day! Jewels were cut out from colorful empty chip bags, and ermine was cotton balls with black paper dots. Everything was held together with scavenged chewing gum softened between thumb and forefinger. We offered him glue but he preferred gum; he carried a black ball of chewed-up fragments. David also made beautiful text drawings with instrument names surrounded by names of jazz musicians and songs. I never understood why the bosses at the center wanted me to stop him from smudging them with his arm. The smudges were beautiful.

Michael Mahalchick: US is on view at Canada in New York City until October 9.

Elisabeth Kley is an artist who lives in Manhattan and works in Brooklyn. Her ceramics, drawings, prints, and wall paintings have been seen in solo and two-person exhibitions including Minutes of Sand, The Fabric Workshop and Museum, Philadelphia, PA (2021); Garden: Elisabeth Kley and Tabboo!, Gordon Robichaux, New York, NY (2019); Flowers Out of Water, Pierre Marie Giraud, Brussels (2017); and Ozymandias, Canada, New York, NY (2016). A monograph on her work was published by Canada and Pre-Echo Press in 2019.