Stone as material and metaphor. 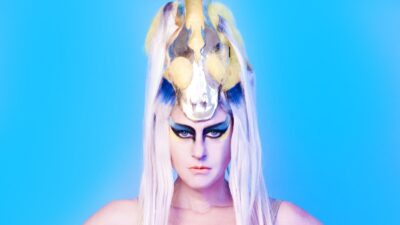 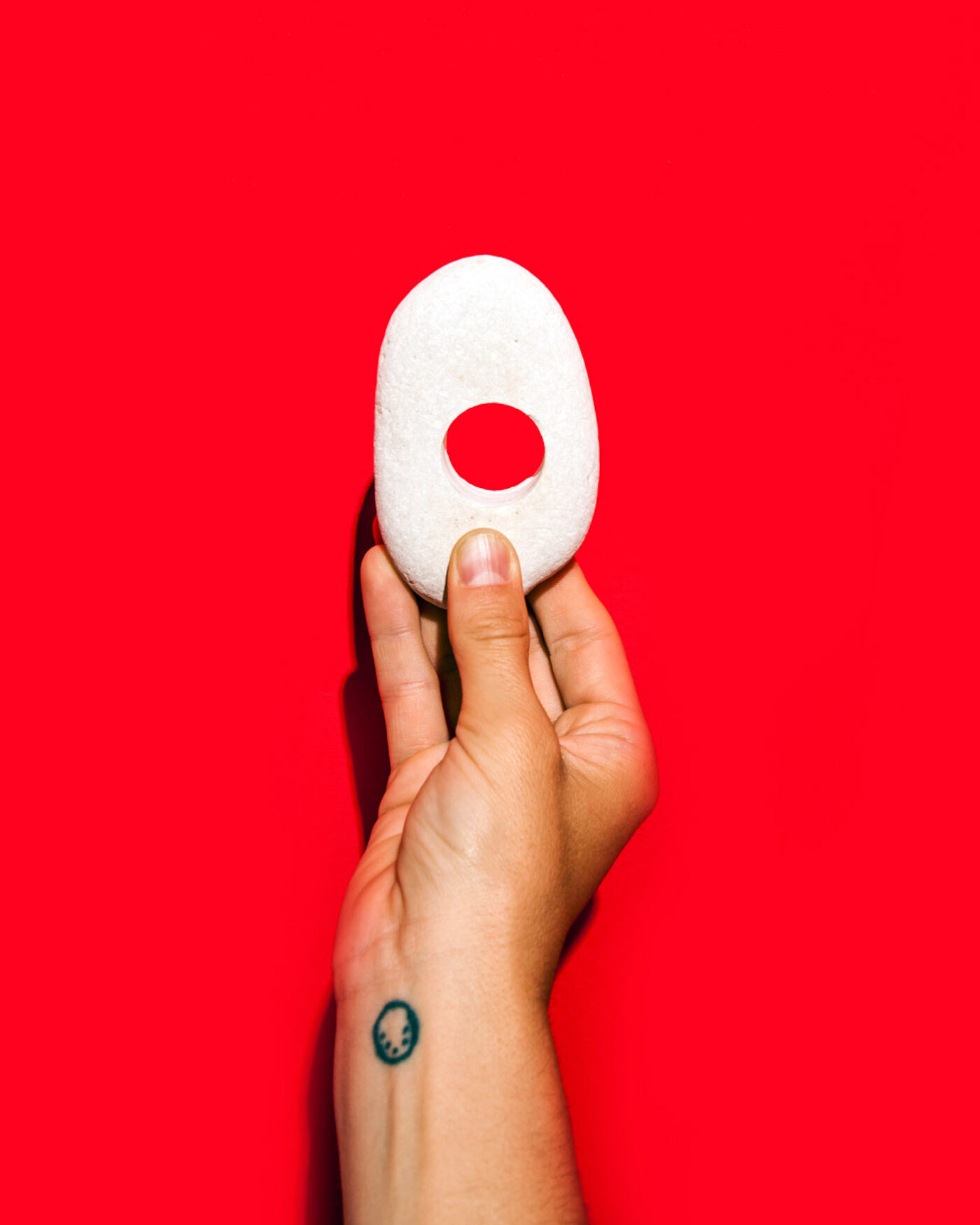 JD Samson is known as a musician, a DJ, and a queer space-maker in New York City and beyond. Recently, I came across her sculptural project STONED. Strong hands held rocks with holes drilled through the middles, up against brightly colored backdrops. In an artist statement accompanying the work, JD references her family traveling over on the Mayflower and landing at Plymouth Rock. In answer to this colonial history, JD writes, “drill a hole through it.” What is she doing with that drill? What is she creating and destroying together? Historiography theorist Elizabeth Freeman writes, “History is a hole to penetrate, but not with the usual instruments.” And so I sat down with JD over a kitchen table of hole-y stones, fingering and thumbing them as we talked about her unusual instruments.

Tess Altman You started working on STONED while you were at a residency in Northampton, right?

JD Samson Yeah. I needed a studio that was far away from humans, to make a lot of noise. Drilling into rocks is extremely loud. Imagine when you hear someone cutting the street—that’s what it sounds like.

TA You’ve referred to drilling into stones as “jamming!”

JDS Ha, yeah. I work in different mediums, but I generally have the same methodology. Like, I have this thing that I want to finish, and it’s for the most part just checking boxes and manual labor, and then I take breaks and kind of work on side projects. Like, when I make a record, I focus on one track that I think is the hit, but then I take little breaks to make other experimental stuff on the way. And I had the same approach to this project. My goal was: I’m drilling four hundred stones. Each stone ranges from one to three inches. Each one took me, at the most, ten minutes to get through. It was exhausting. I ended up doing ten of them at a time, and then lining them up and doing a side-project rock, and then doing ten again.

TA What were your side projects?

TA Are the cores the remnants of the fist’s movement? Or are they the fists themselves?

JDS It became an interesting thing for me to gender the cores versus the holes, because a lot of the time I felt like I was creating this vagina using the drill, but then what I was left with was this phallus. There were some that I never got through—they kept both the hole and the core. I like the idea of it as a transmasculine phallus, where it’s kind of a vagina and kind of a penis at the same time. I get excited about that form. 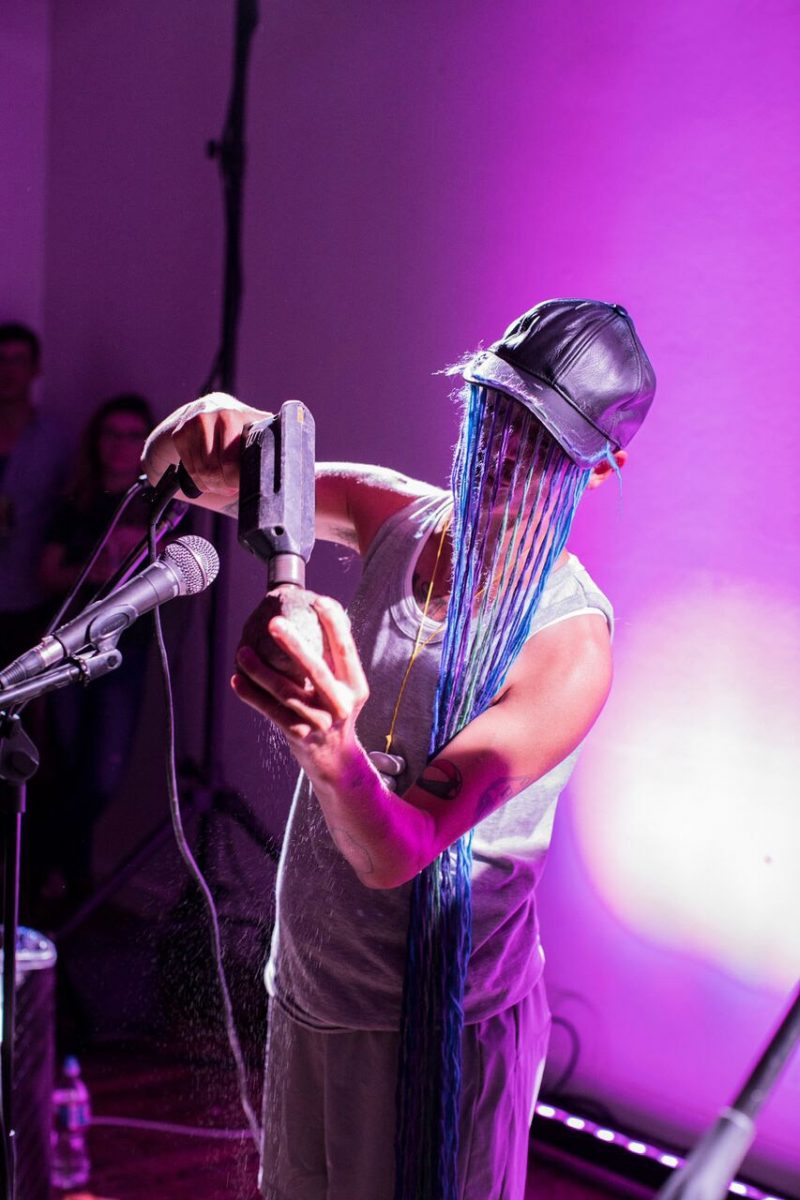 TA Speaking of sex forms: you mentioned this project being concerned with “stoniness” and the practice of being “stone,” of performing the “stone butch” in sex and elsewhere. To be “stone” is typically to not be touched and to be hardened—but actually there’s more to it than that, right? Something comes to be hard because it was once soft? I’m reminded of what Sarah Ahmed writes concerning stones: “Hardening does not eliminate what made hardening seem necessary: that sense of being too soft, too receptive, too willing to receive an impression.”

JDS Yeah. The stone is hard, but it’s also so fragile at the same time. Like, one of the pictures I love so much is this one of all the broken rocks, because they do break if you don’t do it exactly right, and so I ended up with almost as many broken ones as I did ones with holes drilled through them. How can I break apart my own identity of being stone? How can I get rid of this inability to be vulnerable? At first I was going to smash them, but then I got interested in this idea of drilling, in terms of sexuality, and kind of picking apart and analyzing my own sexuality. Maybe each one of these stones represents a sexual encounter that I’ve had. How have I not been fully vulnerable, or “there?” How could I hurt someone? Each rock represents something beautiful to me but also something really self-critical. Throughout the process, it felt like I was critiquing the way I’ve used my sexuality throughout my adult life. I think a lot about how my identity has been shaped for me by my community, and how I went along with it, instead of embodying it for myself. 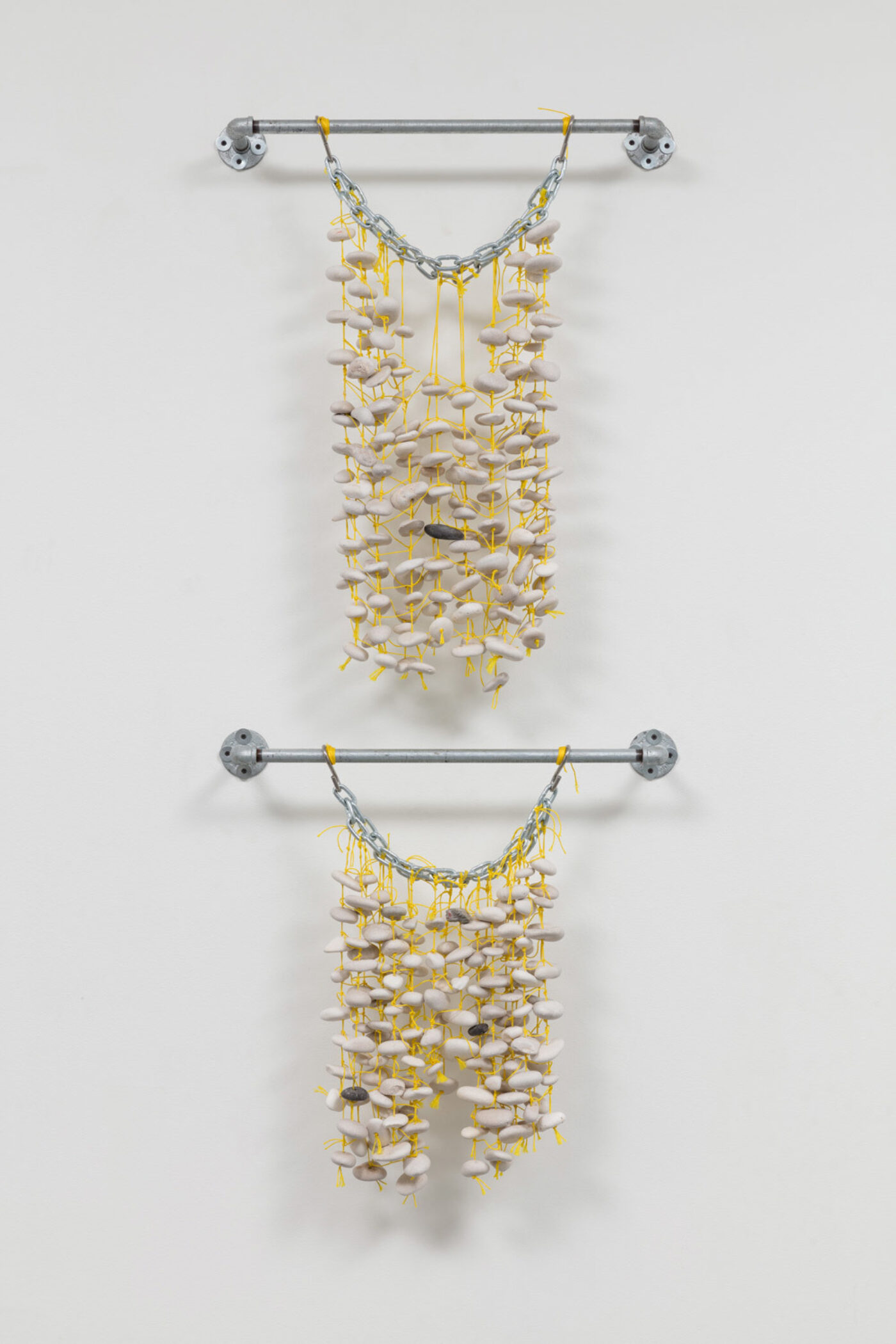 TA It sounds like this drilling carried a lot, both emotionally and physically. Can you describe your experience of being alone in a room for a month, drilling many holes?

JDS It was exhausting. I was really sore, and I ended up being allergic to the dust. I got hives and my hand was all cut up. It was a physical extreme. There was no heat in the studio, so it was like always fifty degrees in there. I was pushing my body to do things that it didn’t want to do. It was also a challenge to be in my thoughts about this stuff, while I was doing it, all the time. It was a kind of punishment. Drilling into myself over and over. And making myself think about it. Like writing your name on the board a thousand times. I was dealing with family stuff, race stuff, sexuality stuff, relationship stuff. It was all the vulnerability of my entire life coming back up. And the only person that could deal with it was me.

TA What type of “family stuff” did this project bring up?

JDS My dad was a sand and gravel miner, and so I spent my childhood around all this equipment. In the name of capitalism, he drew up minerals from the ground and cleaned them and sold them, and that was how I lived as child. And that’s where we’d come hang out, like it was the beach or something. In the summer, we would go there and slide down the piles. I shared a lot about this project with my dad. To be honest, I probably talked to him more during that time than I had in twenty years.

TA Oh, wow—a project about stoniness bringing about a connection with your father, often the paternal model for what it is to be “stone.”

JDS Totally. My family is a very matriarchal family, and the women are definitely in charge, but at the same time, the men complain about it so much that it’s like you have this constant gender argument happening. I never really realized that I took any of that in as a child, because I had my own gender identity. But in the last couple years, I’ve realized how much I’ve been a product of my culture, in thinking that masculinity is somehow what I want. This project was important for me to try to kill my own toxic masculinity, through, like, fucking it. It’s kind of like fucking a frat boy in the ass.

TA Like four hundred of them, that you bought at Home Depot. 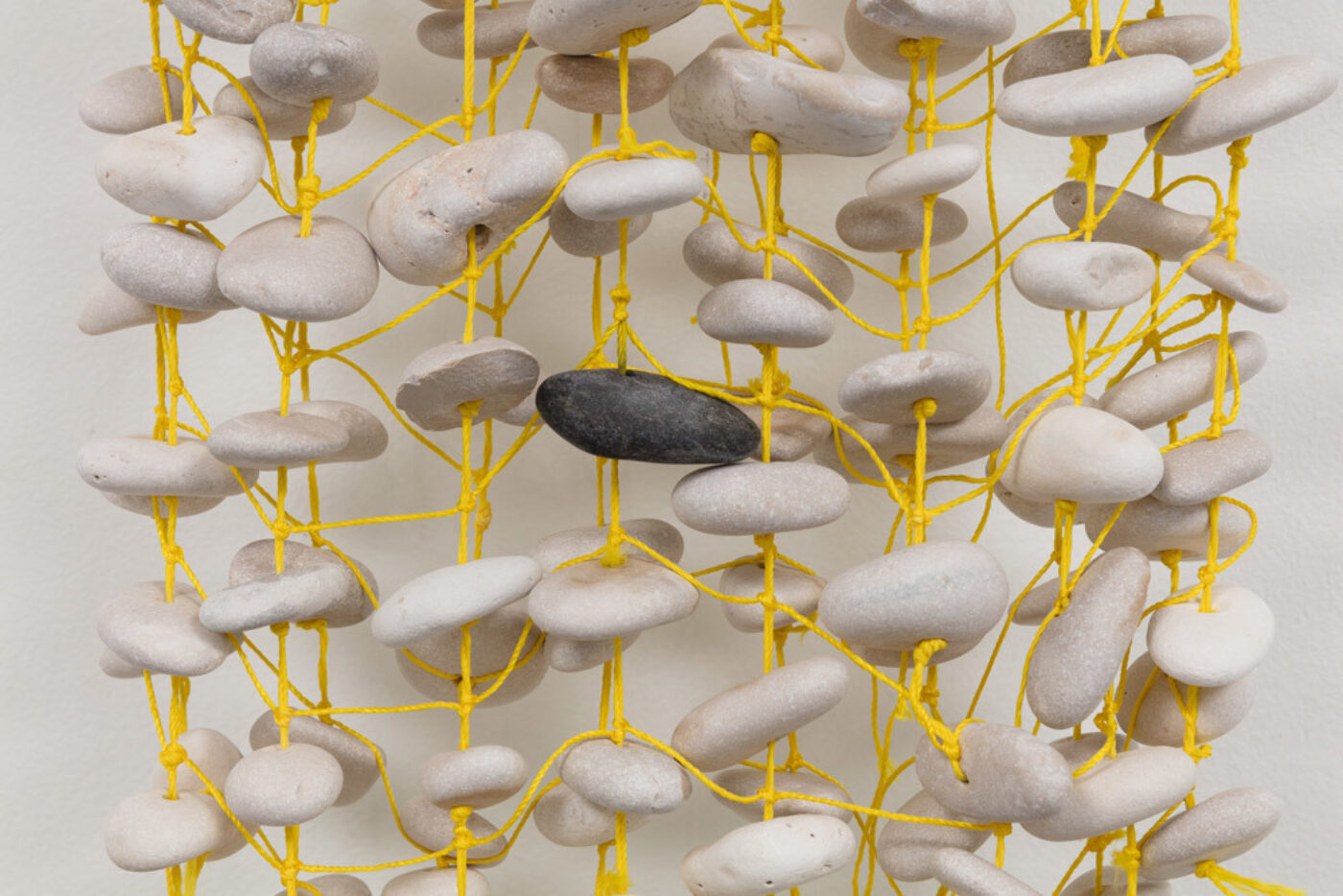 TA Stone is a perfect medium for that sort of probing, isn’t it? Stone is what monuments are made from, the material from which we build our statues of idealized masculine heroes. Another project of yours that traffics in imagery of the glorified colonial man is the music video for JD Samson and MEN’s song “Who Am I to Feel So Free?” You’re on a cliff dressed in colonial sailor drag—perhaps another restaging of the history that you’re trying to drill a hole through?

JD Yeah, the video is meant to be a remake of that famous German painting Wanderer above the Sea of Fog by Caspar David Friedrich. It’s definitely making fun of masculinity—

TA —that growing lighthouse phallus! You’re at the edge of the rock, where the colonial man lands and then raises his lighthouse.

TA Right. Your stones prove that that one-to-one is not so true: the penetrated stone might just come back with its own transmasculine phallus, and it’s all only so hard because it’s been smushed a bunch. It was and still can be soft, receptive, mobile.

The next installment of JD Samson’s PAT party will take place at Union Pool in Brooklyn on February 15.

JD Samson is best known as leader of the band MEN and for being one-third of the electronic-feminist-punk band and performance project, Le Tigre. For more than a decade JD’s career as a musician, producer, and DJ has landed her at the intersection of music, art, activism, and fashion. During that time she has toured the world, produced songs for Grammy-award-winning artists, written for publications such as Huffington Post, Talkhouse, and Creative Time Review, created multi-media artwork, hosted documentary programs for VICE, acted, modeled, and engaged in direct support with a wide range of progressive social and political causes.

Tess Altman is an artist and writer based in New York City. 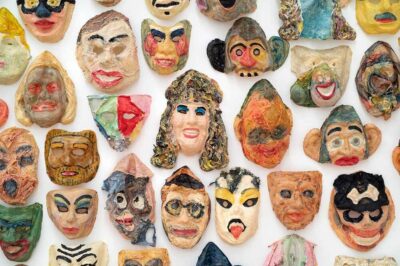