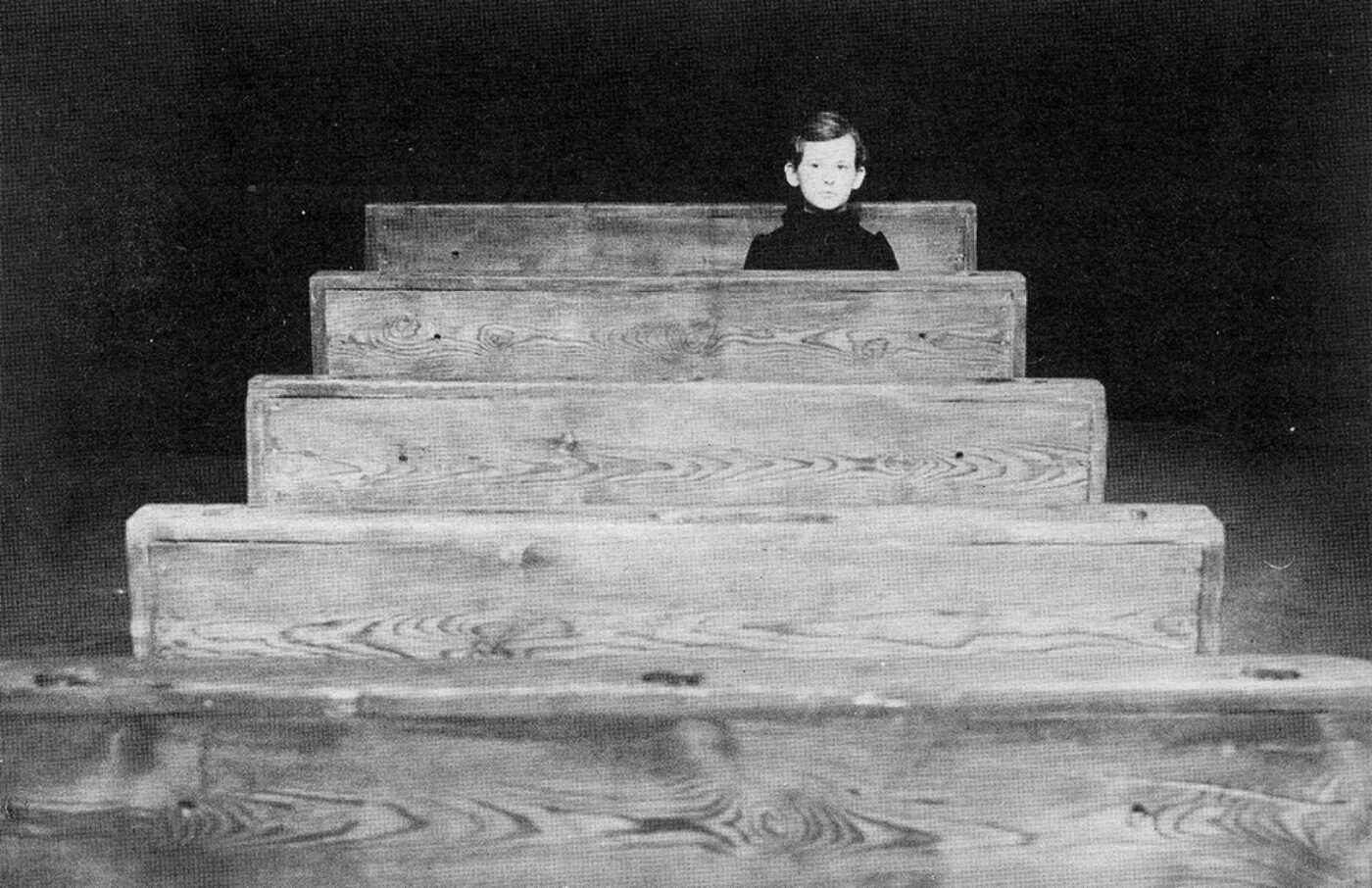 A CLASSROOM
from the last forgotten shred of our memory, somewhere in a strait corner, there project a few rows of poor wooden school BENCHES … dessicated BOOKS disintegrate into dust …
in two CORNERS, the remembrance of long-past punishments is hidden,
like geometrical models drawn on the blackboard with chalk …
the school LAVATORY, where the taste of freedom was first
experienced …
the PUPILS, old dotards on the edge of the grave and those absent …
raise their hands in the gesture which everybody knows, and thus remain
… as if they were asking for something, for something, final … they go
out … the schoolroom is emptying …
and suddenly they all return … the last game of illusion begins …
the grand entree of the actors …
they are all carrying small children, like little corpses …
some of these are swaying inertly, clinging with a desperate
movement, hanging, trailing, as if they were the remorse of conscience,
curling up at the actors’ feet, as if creeping over these metamorphosed specimens … human creatures unashamedly exhibiting the secrets of their past … with the EXCRESCENCES of their own CHILDHOOD.

DRAMATIS PERSONAE OF THE DEAD CLASS
A CHAR—a primitive hag, keeps on performing her actual functions. Their futility in the disintegrating matter of the DEAD CLASS has a glaring, almost circus suggestiveness of the transitoriness of things. These lowest functions shift from objects to persons and this unequivocal washing of bodies reveals the further provinces of the CHAR—DEATH Her final metamorphosis into a ghastly brothel-keeper links up the most distant ideas in a certain uncompromising but human reconciliation; death,—shame—circus—
rot—sex—sham—trash—degradation—
disintegration—pathos—the absolute—
The char reads the “latest news” … 1914 …
the outbreak of the First WORLD WAR …
the assassination of the Crown Prince of Austria in Sarajevo … The beadle
sings the Austrian National Anthem “Oh God, assist our Emperor” … (In the part of Poland occupied by Austria the figure of our graciously reigning Hapsburg monarch was a symbol invested in the charm of the youths of our grandmothers and a jeer at this magnificent dummy.).

A BEADLE—a person of the “lowest standing,” inseparable from the school classroom, into whom has flowed all the melancholy of time past—perfected, for he will be sitting in his chair for ever and ever—and his suspicious returns to life are still another of the tricks played in the class, they should not be treated seriously …

A WOMAN IN A WINDOW. The window is an extraordinary object which separates us from the world “on the other side,” from the “unknown” … from Death. The face behind the window—urgently wants to convey something, wants to see something at any price; in a feeling of utter helplessness she watches everything that is happening around her, and her running commentary becomes more and more malicious and venomous; she is transformed into a Fury and her lyrical encouragements to a spring picnic end with a frenzy of terror and death.

AN OLD MAN IN THE W.C.—sits in the school loo as before, in this special place where loneliness verged on freedom … sitting indecently astride and immersed in endless accounts (perhaps he used to be a shopkeeper in a small town) … galvanized with pain and anger he carries on his clearly defined disputes with God … on this scandalous Mount Sinai …

AN OLD MAN WITH A BICYCLE, who will not be parted from his little bicycle, a piteous and battered toy from his childhood … he constantly goes for nocturnal trips on it, only the place has curiously shrunk to the classroom, around the benches … and it is not he who sits on this bizarre vehicle, but a dead child with its arms outspread … all this takes place in NIGHT LESSON and in a DREAM …

A SOMNAMBULIST PROSTITUTE while still at school committed notorious excesses … she pretended to be a shop-window model, a licentious mannequin often standing naked publicly … it is not known whether her dreams become true later … now, in this DREAM OF THE DEAD CLASS she performs her indecent tour around the benches with the obscene gesture of exposing her breasts …

A WOMAN WITH A MECHANICAL CRADLE

They contain the nostalgia of dreams and the extremity of the last things. Their vital, “mature” fulfillments are a ghastly, sanctioned degeneration. THE WOMAN WITH A MECHANICAL CRADLE becomes the object of a cruel joke played by the whole class; she is chased and caught and set on a peculiar machine, which in the inventory figures as a “FAMILY MACHINE.” Its functions are ambiguous. It should be mentioned in passing that in this theatre all mental and biological functions are usually “objectified” in a scandalous manner. For this purpose different kinds of “Machines” are used, usually rather childishly primitive, of minimal technical value but with extensive imaginary powers.
The “FAMILY MACHINE” is operated by hand and causes a mechanical opening and closing of the culprit’s legs. So that there is no doubt that this is the ritual of giving birth, the CHAR—DEATH brings in a MECHANICAL CRADLE, which is rather like a small coffin. As an already comprehensible consequence the MECHANICAL CRADLE (this time literally) rocks two wooden balls giving a dry unmerciful rattle. This is the joke of the brutal CHAR … birth and death—two complementary systems. (All these happenings are linked in an obscure and enigmatic manner with the happenings extracted from the play, the role of which has already been discussed in the Introduction.)
It is not then surprising that the same WOMAN WITH A MECHANICAL CRADLE, subjected to further strange “ceremonies,” almost ritual SPITTING and pelting with rubbish—sings a LULLABY, which is a desperate scream …

WARNINGS. The figures in THE DEAD CLASS are ambiguous individuals. As if stuck and patched together from various bits and pieces left over from childhood, from the fortunes experienced in their past lives (not always respectable), from their dreams and passions, they keep disintegrating and transforming themselves in this theatrical movement and element, relentlessly making their way towards their final form, which cools off quickly and irrevocably, and which is to contain their whole happiness and their whole pain. THE WHOLE MEMORY OF THE DEAD CLASS. The final preparations for the GREAT GAME with the VOID are made in haste.
Since all this takes place in the theatre, the actors in THE DEAD CLASS loyally keep the rules of dramatic ritual, assume roles in some play, but apparently do not attach very much importance to them, they act as if automatically, out of habit; we have even the impression that they ostentatiously refuse to own up to these roles, as if they were only repeating somebody else’s sentences and actions, tossing them off with facility and without scruples; these rules break down every now and again as if badly learnt; serious gaps occur and many passages are lacking; we have to depend on guesswork and intuition;
perhaps no play is acted, and even if some creation is attempted, it is of little importance in the face of the GAME which is indeed being acted in this THEATRE of DEATH!
This creation of illusions, this negligent improvisation, this shoddiness, this cursoriness, these shreds of sentences, these failing actions, only some intentions, this whole mystification, as if some play were really being acted, this “futility”—only these can bring it about that we have this experience and the sense of the GREAT VOID and the furthest frontier of DEATH. The sequence of the “Dead Class seance,” “Collusions with the Void,” unambiguously contains the theatrical nucleus of this Great Game. It would be unjustified bibliophilic pedantry to attempt to find those missing fragments necessary for a complete “knowledge” of the subject of the plot of this play.
This would be the simplest method of destroying such an important sphere as “FEELING.”
For this reason it is inadvisable to know the content of Tumor Mozgowicz (Mr. Tumour Brainling), a play by I Witkiewicz. It is this very play which has served us for purposes already described.

IMPORTANT EVENTS ARE LOST WITHIN.
THE DREAM IN PROGRESS.
LESSON ON “PROMETHEUS”
INCIDENT WITH A
HEEL.
CAMELS.

COLLUSIONS WITH THE
VOID.

LULLABY.
A DUMMY DIALOGUE.
A CORPSE WASHING.
EXTRAVAGANT DEED OF THE WOMAN
WITH A CRADLE.
SHOCKING BEHAVIOR OF THE OLD
MAN FROM THE W.C.
THE FLABBERGASTED OLD MAN
WITH A BICYCLE
RIDES OFF BIDDING EVERYONE
FAREWELL
AND FROM THAT TIME HE WILL CONTINUE
RIDING OFF AND
BIDDING FARWELL
DISGUSTING ADULATIONS
THE DEAF OLD MAN
BRINGS SHATTERING NEWS!

INFINITY, i.e. EAR CLEANING.
UNJUSTIFIED RUN OF DEAF OLD MAN.
who will hence forth continue to run without
end or aim.

THE CORPSE WASHING CONTINUES.
THE FUNERAL COURTING OF THE SOLDIER
FROM THE FIRST WORLD WAR.
THE HESITATION OF THE WOMAN WITH A
CRADLE.
and they in turn will be from now on
repeating their increasingly empty and
senseless gestures.

A SCANDALOUS RETURN.
THE CHARWOMAN-DEATH IN HER NEW SHAMELESS ROLE.
THE BEADLE PASSES INTO ETERNITY WITH HIS AUSTRIAN NATIONAL ANTHEM.
The theatre of
automats
continues.

all repeat their arrested gestures,
which they will never finish, imprisoned by
them for ever.
THE WOMAN BEHIND THE WINDOW
stares incessantly.

Twisting And Shouting by Craig Gholson