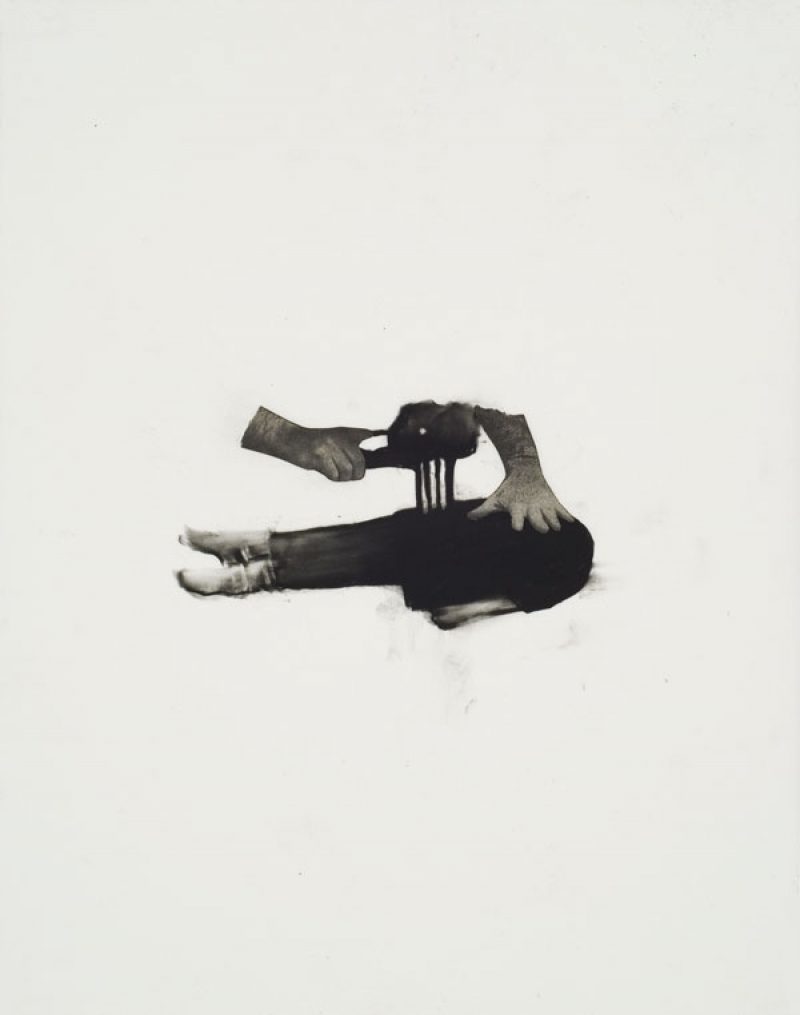 We are admitted at once, of course. There is a long line, but we brush right past. We are serious, it seems, more so than others. I wink at you. You laugh. On the walls all the laughs are painted in a baroque fashion, which means as gilt dolphins. You and I despise gilt dolphins, of course. Of course we do. The man who is waiting for us has drawn up the papers. “You are prepared to do this?” “We are,” I say. “Most definitely, we are.” “At least I am,” you say. “I don’t know about this joker.” You laugh; and this time someone rings a bell to answer you. It is just the man laughing. His laugh sounds like a bell that is being rung elsewhere. “If we weren’t ready before we came,” I begin to say, but the man shakes his head sadly. He holds up a sign: NO MORE TALKING. And then it is time. He leads us to the beds, the skin of his fingers as soft as candles. It is in another room, quite far from where we were, but we don’t begrudge the distance. We are happy about the room. There are fine tall windows, which you point out, as if it matters. I lie on one pallet, you lie on the other. You take my hand and laugh again. You laugh, I laugh. We are laughing, and he injects us, and we are laughing more. It is so funny. Don’t you remember, in that place where we last were, that thing that … At some point, you become quiet, and I realize: you have died. I try to turn my head to look, but there isn’t any of that. No turning of the head. No turning of the head, no hand. The hands aren’t doing anything. They aren’t hands. The sound of the bell comes again, closer this time. Closer and closer. I was remembering something, about someone I knew. I was…

—But, he objected, when I woke, I was in the crib. It was my earliest memory, light blue walls and the shadows of slats everywhere, too many to count. It is hard to say even if the light was that of the streetlamps or the sun, or even moonlight. I had not been told of the moon. A droning sound came through chinks in the floorboards. There were people below, visitors. They were talking with my parents and I was in this room above, sleeping. The droning went on and on. Only one voice could I make out—my oldest brother’s. He was saying that a play he was in had been a great success, that he and the others had been given medals by the Municipal Committee—that they had been invited to put on the play in Koniksberg the following spring. But, of course, they could not. Not now. And with that, the memory can be placed to within a month. For there was a particular month of months in the childhood of my brother, this childhood which, in part, was also my childhood, when my brother lost his leg to a thresher. He had been loaned out to a farmer at harvest time.

—You don’t have a brother, said L.

—He died later that year, or the year after. He was my father’s favorite. My father had his tailor make them the same suit of clothes. My brother’s set is under glass in our living room. His name was Ernest. He pinched me once, for no reason, but I made no sound. Then he pinched me again. My mother was watching. She hated him. It was she who loaned him out to the farmer. He was the most promising student in the whole district. She said, pinching is a sign of weakness, Ernest, they will certainly kill you where you’re going. And she was right.

Jesse Ball is the author of many works of fiction and poetry, most recently The Curfew (Vintage) and The Village on Horseback (Milkweed). He lives in Chicago and teaches at the School of the Art Institute of Chicago.

Sophie Jodoin lives and works in Montreal, and has exhibited widely. She favors the media of drawing, photography, and video. Since 2004, she has worked exclusively in black and white. She will be showing at VOLTA NY in March 2012.