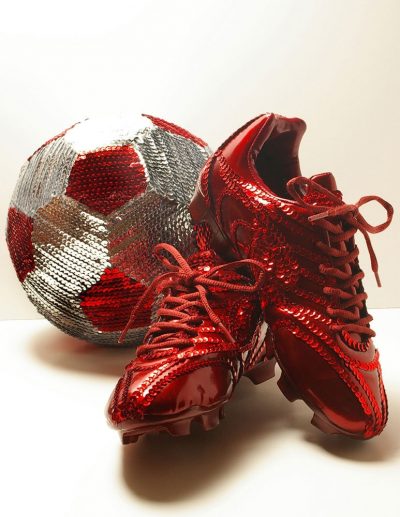 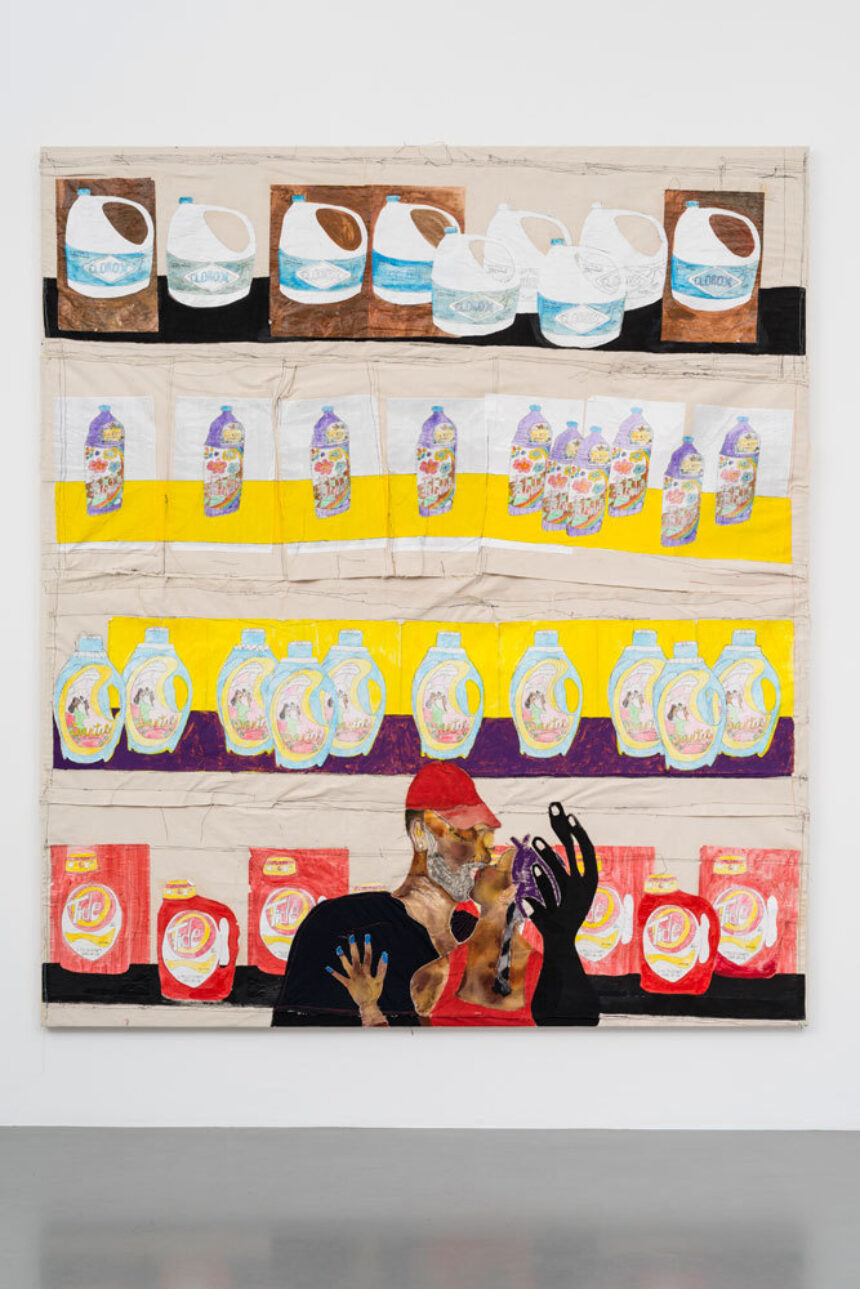 I met Tschabalala Self in her New Haven, Connecticut, studio just a few blocks from Yale where she attended graduate school but never had the chance to relocate as she was immediately thrust into a whirlwind of notable visibility. She hopped a flight to Berlin for her first exhibition on the day of her commencement and hasn’t stopped expanding since. Her studio is covered in body parts. Plastered arms, asses, and vulvas are suspended from clothing racks and sprawl across the floor. Twenty-two-inch Kanekalon braiding hair is pinned to the wall. Patterned fabrics of textured variety emulate lips, fingernails, and knees. I say that it looks like a black girl graveyard. Self laughs, soft and veritable. “Yeah, except I bring them back to life,” she says as she crawls across the floor in knee pads collecting, cutting, and then bonding the pieces to a figure three times her size.

Born in 1990 in Harlem, Self’s figurative work primarily focuses on the black woman and the way black bodies inhabit and defy the narrow spaces in which they are often forced to exist. Her figures are made with mixed-media materials including acrylic, silks, and furs that when affixed to a stretched canvas create waves and ripples that mimic movement. This motion is a necessary meditation in Self’s subjects and her own reality, as she defines confinement as the genesis story of her enslaved ancestors. This history informs Self’s insistence that her creations depict the most basic right of humanity that rests just beyond the grasp of many black people—the ability to move freely without fear of punishment.

Self sat behind her sewing machine as we spoke.

Sasha Bonét Some of your work presents the black woman’s body in a genderless or non-binary form. With your piece Loner (2016), which I saw at the New Museum’s Trigger: Gender as a Tool and a Weapon exhibition, I asked myself: Why am I inclined to project a gender upon this figure? Beyond curved proportions and box braids, it could easily be a male figure. She has a masculine stance. She’s defying typical feminine ideals that insist one must suck-in here, squeeze there, and shrink all over. What led you to create her in this way?

Tschabalala Self If I’m thinking about a figure as a single body and not a caricature of a group, then it can be more nuanced in relation to identity. When I was creating the persona for that work, that’s the energy I got, and it just came together. I didn’t feel any need to manipulate it further to make it more or less toward any gender. It felt truthful, and it felt like a character I have encountered.

SB Your work mostly depicts women, but in the work that includes male figures it’s as if they only exist to tell the story of the woman, particularly your piece called Partners (2016) that I saw in Paris. It shows a woman holding the man’s head up, but he doesn’t even have a body. How are you thinking about the role of the male in relationship to the black woman when you create these pieces?

TS The male characters are continuations of the female persona. They are there to help tell the story about her.

SB Is this a way to address matriarchal family structures within the black experience in the Americas?

TS Maybe it is, and I hadn’t thought of it in this way. I think I have to ask myself more sincerely what my relationship is with the male characters that I have made. In my own life I had so many sisters and my house was so women heavy that maybe in my own mind I kind of prioritized women. There are so many variations in experience within black family dynamics, but across the board there is always so much work and emotional labor being done by women. 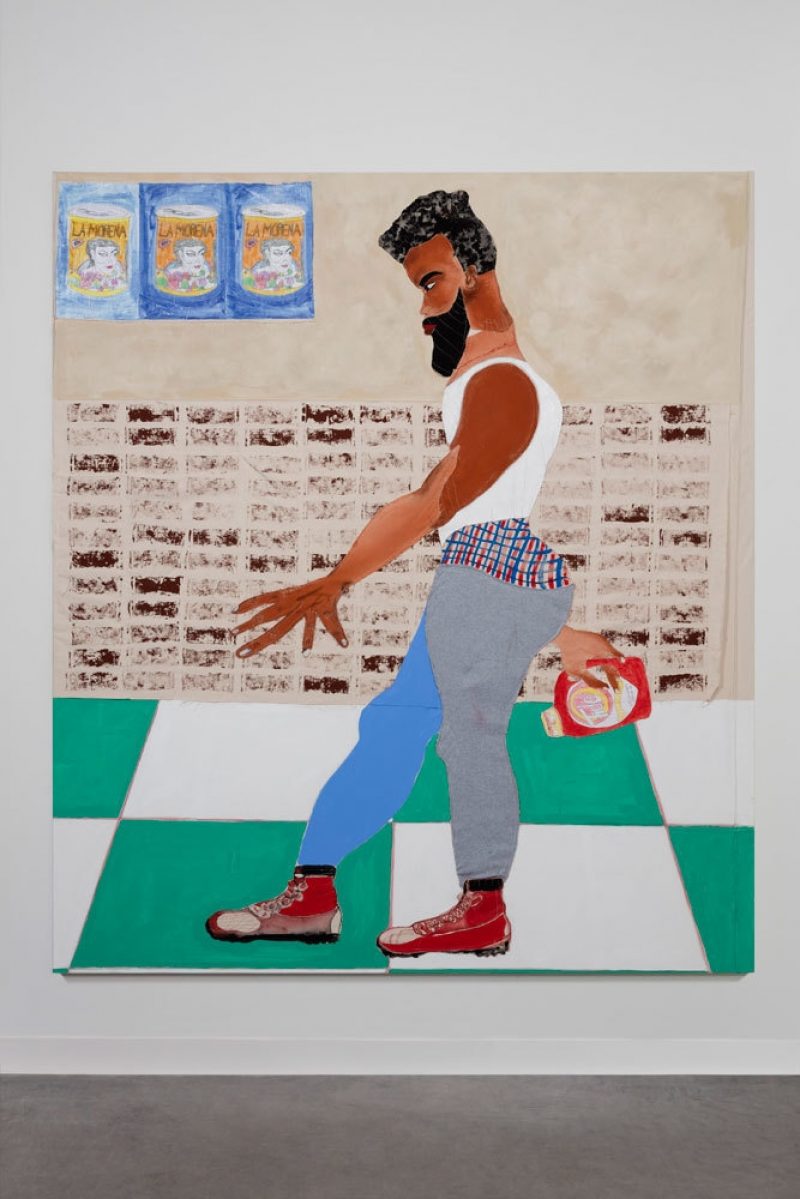 SB How has your mother’s ethos and practice shown up in your work?

TS My mom would sew at home, making curtains and clothes. She would make our Easter dresses. I started sewing after my mom passed. She would trace patterns on the floor, and I frequently work on the floor as well. I use a lot of the fabric that she collected. She would also reuse things. If my sisters outgrew a pair of pants, she would turn them into skirts. I do that in my practice. Everything is a part of the space that it was created in.

SB Your work reminds me of Emma Amos in the way that it weaves fabrics and patterns with black figures to create layered storytelling. It also recalls Romare Bearden’s collages. Both were members of the Spiral Art Collective in the 1960s, and I’m sure they influenced one another. Have they influenced your work at all?

TS Yes, I really like Amos’s work. I like the formal decisions she makes in her art, and the way she works with abstraction. The same goes for Bearden. He’s been a huge influence on me—his relationship to collage, his interest in black quotidian life. His work has been really important to me, especially in my most recent collection, which deals with how an individual can speak to community as well as my thinking about cityscapes. Thinking about Harlem. 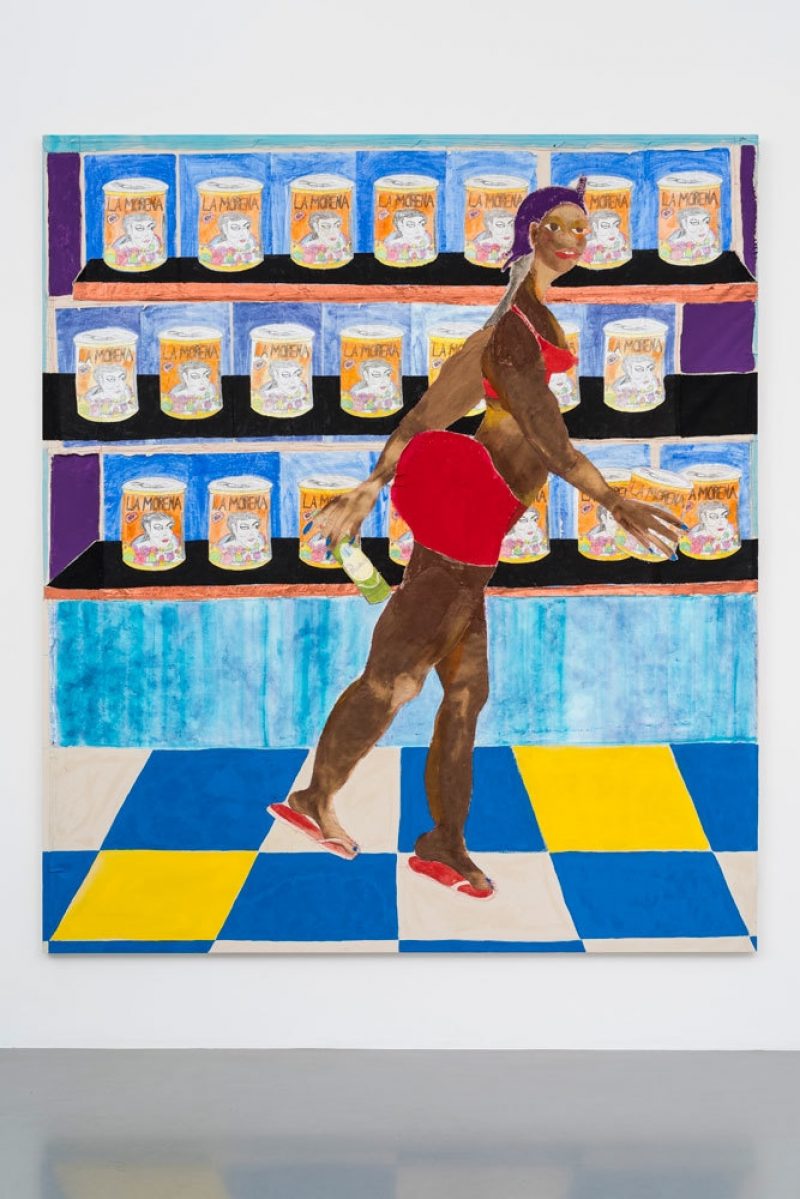 SB Is this how your bodega series came to be?

TS Yes, because bodegas are a part of the cityscape. But it’s interesting because it’s an interior space, yet it’s also something that’s emblematic of the city. I really wanted to push myself to do something different conceptually, and I wanted to place my figure within an environment. And I felt like the bodega was an environment where one may encounter one of my figures. The bodega is one of these places that you see constantly in Harlem. They’re on almost every corner. Also the fact that they’re on corners, which are intersections. They say a lot about the community. The purpose they serve there. The ways that they exceed their purpose and the ways that they are unable to provide. I think that visually they are really beautiful spaces. It’s an accumulation of products in those stores, and I have an accumulation of material in my works. Unpacking the space visually is so interesting and fun. Bodegas are also organized in a more utilitarian way than more traditional supermarkets. It’s not supposed to be a shopping experience. It’s more of a come in, get something, and leave. You’re not welcome to spend much time inside. Sometimes you’re not even welcome to come in. Sometimes you have to make purchases through a bulletproof carousel. I’m fascinated with these stores that proliferate within a whole neighborhood, and I’m interested in general with the kind of stores that people’s bodies are put into every day. They are affected by this environment. SB So your bodega series is an examination of not only the bodies but also the way certain environments affect those bodies, and how this in turn affects the way these bodies move through the world. Messages that are subconsciously consumed then inform how one views one’s self.

TS How does what you consume affect your body? How is your body affected by the environment it inhabits? What are those symbols communicating to you? 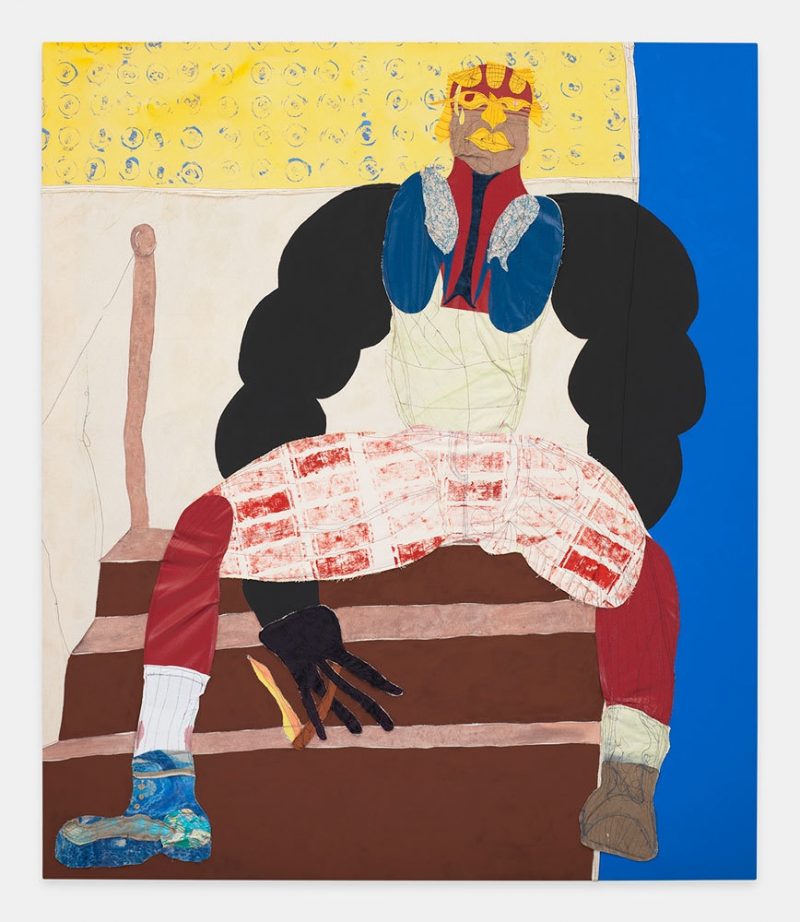 SB You present the figures in a way that has complexity and nuance and does not simply communicate them as a Queen, as if she’s perfect, she’s magic. Instead, she has flaws and fears; she is sexual but also coy, clever and courageous. How do you arrive to this place of power and not feel obligated as a black woman artist to present the perfect black figure?

TS I think that people who feel that obligation are presuming their audience to be non-black people. I don’t think that anyone has that desire to prove to other black people that black people are worthy of complex interpretation. The problem with creating a perfect figure is that you’re creating another myth. There are already enough myths around the black body. The perfect black person is another fantasy. No body functions like that in the real world. To make someone have to function as that is to strip them of a lot of humanity. How are you going to see them as being a real person? I think the main problem is that people don’t see black people as being real people. Either they’re not real because people think they are less than them, or they’re not real because people have fantastical ideas about black people being supernatural.

SB Do you feel like collage lends itself toward the idea of one individual body being occupied by many selves?

TS Yeah. One individual having many parts. One individual being made from lots of different distinct elements. So the way the work is actually made forms how it is meant to be understood. A lot of the hope contained by the figures comes from how they are made as compositional decisions, and their scenarios add more complexity.

SB Why do you exaggerate the facial and body features of the figures?

TS I really want their physicality and race to come through.

Self’s studio manager says that Self often turns and asks, “Does this girl look black to you?”

Tschabalala Self: Bodega Run is on view at the Yuz Museum in Shanghai until December 9.

Sasha Bonét is a writer and visual storyteller living in New York City. 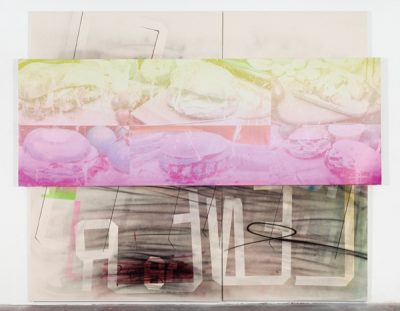 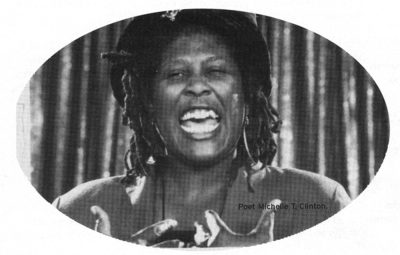