Tsai Ming-Liang’s What Time Is It There? by William Cohen

Tsai Ming-Liang’s film What Time Is It There? uncovers ghosts in Taipei and Paris and pays its respects to French filmmakers Truffaut and Léaud. 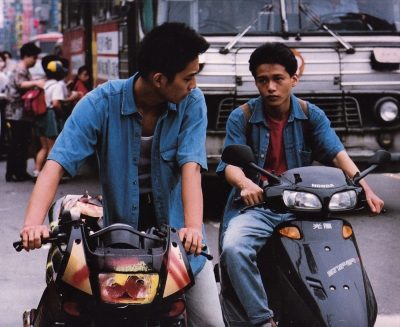 What could drive a full-grown adult to pee in a bag? Early in Tsai Ming-Liang’s tender new film, What Time Is It There?, a young man named Hsiao Kang tiptoes through his family’s silent apartment in his pajamas. He pauses near the bathroom, listening, poised on his toes like a ballerina. Then he dashes back to his room, where he fishes a plastic bag out of the garbage and empties his bladder.

Hsiao Kang’s skittishness is on account of his father, who has died only a few days before. Afraid the old man’s spirit still lurks in the apartment, Hsiao Kang cowers in his room by night and seeks distraction on the job by day; he works as a street vendor, hawking watches out of a suitcase. After he sells his own watch to a young woman named Shiang-Chyi who is leaving for Paris, Hsiao Kang channels his grief into a fixation on her and the French capital. He begins to set all his wares to Paris time and to fiddle with Taipei’s public clocks as well. Meanwhile, with Hsiao Kang’s watch on her wrist, Shiang-Chyi drifts alone through Paris and finds herself troubled by ghosts of her own.

As in much of Tsai’s previous work, the characters bend under the weight of their unresolved relationships. But this film also carries an obvious personal charge. Both Tsai and the star of all his films to date, Lee Kang-Sheng, lost their fathers in recent years, and the somber, melancholy tale feels like an effort on both men’s part to find closure. When Hsiao Kang’s Francophilia leads him to purchase a video-disc of François Truffaut’s The 400 Blows, Tsai doffs his cap to the French master of this sort of diaristic moviemaking. (Truffaut’s own longtime collaborator, Jean-Pierre Léaud, makes an appearance, turning up as a middle-aged dragueur in a Paris cemetery.)

Even when the film treads on messy emotional terrain, it remains carefully controlled. Tsai’s camera never budges, and he builds his narrative from meticulously framed shots. His subdued palette of muddy greens, gelid blues, and chalky whites blends Hsiao Kang’s Taipei and Shiang-Chyi’s Paris into a single, washed-out urban landscape. But the film isn’t entirely stiff and ponderous. Tsai’s touch is gentle, and the film’s abiding sadness is all the more affecting for its hints of sly humor—as when Hsiao Kang’s mother begs him to spare a cockroach for fear it is his reincarnated father.

Tsai Ming-Liang’s What Time is it There? was released by Winstar Cinema in January 2002.