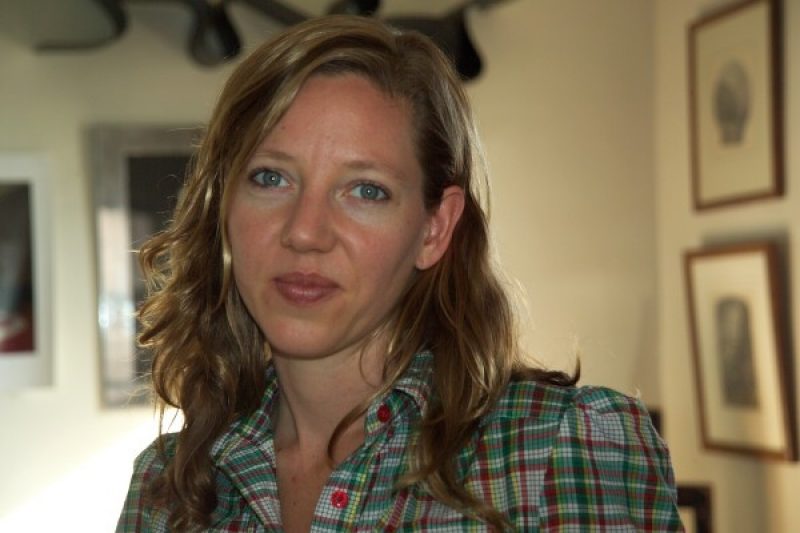 Maggie Nelson is one of the most compelling writers working today. From her critical work like Women, the New York School, and Other True Abstractions (University of Iowa Press, 2007; the recipient of a Creative Capital/Andy Warhol Foundation Arts Writers Grant, as well as the 2008 Susanne M. Glasscock Humanities Book Prize for Interdisciplinary Scholarship) to her nonfiction, The Red Parts: A Memoir (Free Press, 2007; named a Notable Book of the Year by the State of Michigan) to her poetry, Something Bright, Then Holes (Soft Skull Press, 2007), and Jane: A Murder (Soft Skull, 2005; finalist, the PEN/Martha Albrand Award for the Art of the Memoir). Her genre defying work is electric— she trounces the line between poetry, memoir, and nonfiction, creating her own riveting literary hybrid. The CalArts Professor is currently working on a book of cultural and art criticism titled The Art of Cruelty, forthcoming from W. W. Norton.

Nelson’s most recent book Bluets (Wave Books, 2009) is a poetic nonfiction meditation on the color blue. She starts with “Suppose I were to begin by saying that I had fallen in love with a color,” and goes on to illuminate several factual, historical, and sometimes personal experiences with the color blue. Egged on by writings on color by Wittgenstein and Goethe, Nelson adds her voice to the color debate with 240 short, journal-like observations. From blue factoids like Benedict de Saussure’s 1789 invention of “cyanometer, with which he hoped to measure the blue of the sky,” to her own struggles with depression, Nelson gifts us with what seems like a lifetime study of blue while somehow slyly avoiding any of the obvious “blue” clichés. Maggie Nelson continues to raise the bar higher in what a reader can expect from a book. Bluets is smart yet intimate, quiet yet provocative, and a welcome addition to the poetic non-fiction discourse.

Below is an interview with Maggie Nelson about Bluets:

Susie DeFord What gave you the idea to write a collection based on the color blue? Was it the works of Goethe and Wittgenstein on color or did you discover those after you began?

Maggie Nelson I’ve always loved blue, and I’ve always been a writer, so the prospect of a book about blue has been hovering with me, around me, for some time. But in another sense, the book was a localized, reactionary choice: I had just written two books about a sexual murder in my family (Jane: A Murder and The Red Parts) and I actively wanted to spend time writing and thinking about something I loved rather than something I found despicable and frightening. So it began as a pillow book of sorts, a book devoted to pleasure. Because I am who I am, or because pleasure is what it is, the book slid pretty quickly into dealing with pain too.

I have been a longtime lover of Wittgenstein, so that love predated this project. Goethe I think I read along the way, as I devoured many classics of color writing.

SD What is your first memory of the color blue?

MN I grew up near the beach in northern California—Muir Beach in particular—and spent many hours as a child, and later, as a teenager, driving those crazy curvy roads with that unbelievable expanse of blue ocean spread out down below. That geographical setting—which is really more of a phosphene for me than a place—appears early on in Bluets, in #6, where I say, “The half-circle of blinding turquoise ocean is this love’s primal scene.” It’s a spot where I learned something about being alone, and something about the sublime, and likely something about the pain and the pleasure of each.

SD Did blue factoids like those of the Cyanometer and Bower birds come to you naturally because it was your favorite color, and then you decided to write a book about blue? Or was there a conscious blue fact hunt as a result of deciding to write the book?

MN I collected blue factoids, as you say, for years, just naturally—one exerts a magnetic effect (hopefully!) on what one loves. But once I started the project, I definitely hunted. Michel Pastoreau, William Gass, John Gage, David Batchelor, Victoria Finlay, and other writers provided leads, which I followed according to whim and intuition. As far as hunting in the wild goes, I did my fair share. Blue is, as the book notes, both utterly abundant and also quite rare in nature, so the hunting was paradoxical. It’s related, perhaps, to looking for love, or anything else that can feel puzzlingly ubiquitous and zero-sum.

SD On your credits page you have sections for “The Principal Correspondents and Suppliers,” and in the text you mention “blue correspondents.” Did your blue information come mostly from your own research or via others once you mentioned you were writing a book about blue? What was the format for others’ submissions to your blue fact collection?

MN The information came from everywhere. Perhaps mostly from books, as mentioned above, but I also informally invited and attracted blue facts and stories from all sides. I guess to qualify as a correspondent, someone had to supply me on more than one occasion; certain friends were treasure troves of blue facts. A lot of blue bits would come my way—and still come my way, though I don’t know what to do with them anymore—after giving of a public reading from the book. So audience members, friends, lovers, and colleagues all got into the act, which was great. It felt like a beautiful detective story, but with no denouement, no arc, no solution, no crime. While working on the book I started a blue altar in my house to collect all the weird goods that came my way, and believe me, they were weird—a light blue cement road bump/disc thing with a smiley face painted on it by a desert-dweller, shreds of a navy blue shirt passed back-and-forth between me and the so-called princess of blue, pictures and postcards of Jesus, in his blue mandorla, which I sewed together and hung up like a mobile, and so on. And there are so many leads I never followed—for example, my friend, a great poet named Christian Hawkey, told me a hair too late in the game about the blues of Georg Trakl, which I would have liked to pursue. Another lifetime!

SD In your writing you’ve worked in several different forms from poetic lyric to memoir to non-fiction. The form of Bluets is a sort of series of numbered journal-like prose entries. How did you decide to go with this form for this book?

MN I was writing a lot of blue poems for some time, some of which ended up appearing (in prose) in Bluets, but I wasn’t happy with them as poems at all. I felt they just scattered thoughts, facts, and strong feelings around, without any of the focus or logic or sequential accretion that I had in mind. I was so taken with the form, tone, and locutions of Wittgenstein’s Philosophical Investigations that it took me awhile to realize that the form for Bluets was right there, staring me in the face. I basically took half of the book’s locutions from Wittgenstein, and the other half from Goethe: the anecdotal locutions about perception come from Theory of Colours, and the relentless form of self-questioning, of pulling the rug out from under the speaker each time she has come to perch, comes from Philosophical Investigations. The combination and form all came to me at once one day while I was browsing in the philosophy section of a dusty, cowboy bookstore in Joshua Tree. I drove back to LA and applied it to what I’d gathered, and it seemed to take.

SD How do you decide the form of any project you work on? Does your subject matter dictate the form or do you have to tinker with different forms to see which one works best?

MN It’s both—the content dictates the form, but I have to try out different forms to see what form the content wants to take. This can be quite frustrating, even if it ends up the most inventive thing I do as a writer. I remember, back in college, reading the line, “I look for the form/ things want to come as” (by Archie Ammons, I think—not a poet I’ve spent a lot of time with, but this one line obviously stuck), and thinking to myself, yes, that’s exactly how it is for me. The irony is that philosophically, or metaphysically, or spiritually even, I don’t think I really agree with this approach at all. I mean, things are what they are. But if an invented thing doesn’t properly exist prior to one’s inventing it—well, maybe then you do have to look for the forms things want to come as.

SD Most of your books of poetry seem to have a central theme as opposed to just being a collection of poems on various topics. What do you attribute this to?

MN Writing the book Jane: A Murder changed a lot, maybe everything, for me. After years of writing short, individual lyric poems, I suddenly felt my mind hunger out past the one-page mark, and into the problems posed by more capacious structures. And, I guess, those posed by working with a “topic,” as you say. “Topic” may be a more accurate word than “story,” though narrative often shimmers in as a by-product of working with length and sequence. But mostly it’s a formal interest that pushes me out, an abiding interest in—and bewilderment about—how thoughts hold together, how they push against each other. How they congeal, contrast, accrue, or change via juxtaposition or order. For the moment I seemingly can’t go back to short poems—I’m working on another longish nonfiction project right now, called The Art of Cruelty, which has a form (straight-away prose) but is still wandering around in the lands of tone and genre.

SD In Bluets you mention wanting to travel to blue sites such as ancient indigo and woad production sites in Afghanistan and Morocco amongst others. You go on to say you didn’t have any money to go and were denied a grant. Do you have any blue travel tales? Have you been able to take any trips to any blue specific sites or do you have any plans to in the future?

MN Oh no, I have no blue travel tales to tell at all. Some of the blue correspondents sent me news from Morocco, or from Africa, or from other far-off lands, but I mean it when I say in Bluets that my blues stayed local. I think that’s alright. I have a quotation pinned on my wall, from a Chinese poet named Mo Fei, that says: “Poetry has to do with a satisfaction with limited things, a paring down. It is the acceptance of a certain form of poverty. It is not endless construction.” I like this asceticism, this surrender to the condensery, as Lorine Niedecker once called it. Bluets is about that distillation, as performed in the face of something as all-encompassing and endlessly beautiful as the color blue. Somehow it all reminds me of John Cage’s formative experience in a soundproof booth: he was amazed to discover that instead of silence, he could still hear two sounds: that of his nervous system, and that of his blood beating. He said this event gave his life direction, insofar as it sent him down the path of nonintention. I suppose I feel something of the same about blue, though I’d be hard pressed to explain more. It relieves and enlivens me.