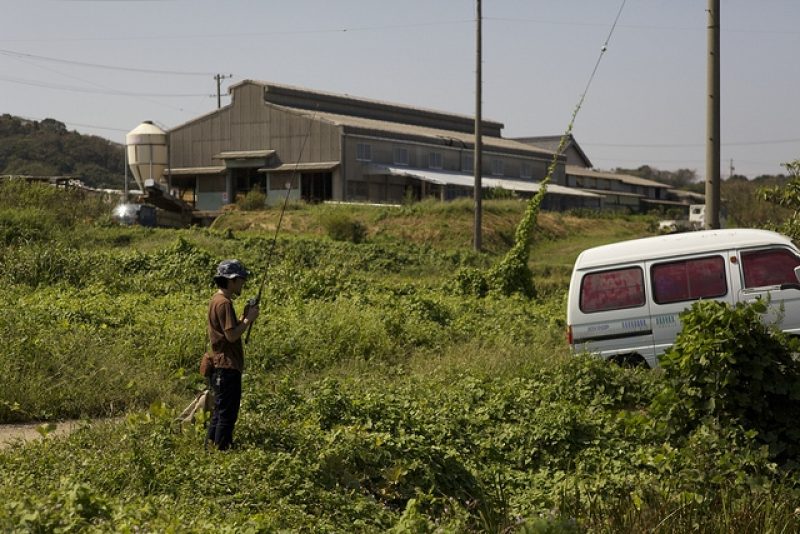 Some years ago, near the top of a steep road in San Francisco, I pulled the parking brake on my car and sat there at a deathly angle, scared out of my mind. A group of bicyclists flew past on the cross street. Dressed in yellow and black, they looked like a storm of giant bees. One after another passed by and it kept going like that for a few minutes. A car horn beeped and in the rearview mirror, I could see a woman flipping her hand forward for me to get on. But, I couldn’t move. She let her car go down the hill a way and then punched the gas and sped past me in the other lane. We looked at each other for a moment. Her face was pink with anger, but I could tell she saw the terror in my eyes and knew what that terror felt like. “Don’t be afraid,” her eyes said. I pushed down the parking brake and did as she had, easing the car down the hill and then up over the crest onto level ground.

That night, I found a cheap hostel where the owner gave me a towel, a coin and a bar of soap. He let me into a room where there were two bunk beds and clothes spread out on three of the mattresses. The room smelled like mop water. I looked at the owner. “What did you expect?” he said. I was on the bottom bunk near the window, which had been left slightly open. There was a flat roof outside and I perched there and smoked and listened to the horns and whistles on the street below.

There is no way to trust the mind in a city. It goes where sound goes and it can present such disturbing scenes of human depravity that to stop moving is to go mad. I bought a six-pack of beer and took it up to the room and drank and tried to pronounce the words in the German translation of Lolita that I’d found lying beside my bed. I wanted to speak all languages and go everywhere. By the end of my sixth beer, I had built an apparatus that when entered shot me to my desired destination. I made love to a Japanese model in Tokyo, played flamenco guitar in Madrid while a woman in a violet dress danced across the stage, ate smoked fish with an Inuit family in the Northwest Territories of Canada, went back to Tokyo and told the model I loved her, but she would not take me in, and so I went to Buenos Aires, San Cristóbal de las Casas, Havana, Johannesburg, Transylvania, Paris, Rome. I knew every street, park, statue, ruin and skyscraper. I thought, what more is there? I would have to wait for the cities to be demolished and rebuilt before going back.

It was two in the morning when the travelers returned. They didn’t turn on the light, but made enough noise that I woke and watched their shapes move across the room. There were three men and a woman. They spoke softly to each other, but I couldn’t tell if they knew I was there; I had put my bag under my bed. I saw their shapes change as they peeled away their clothing. I could smell new sweat and cigarette smoke. One figure went to a knee, and the shapes of the others changed again. I heard the sucking sounds of sex. All three men had a turn with the woman. She moaned. Then her tone changed, and one of the men spanked her. They went on for a half hour or so. When they finished, two of the men went to the bunk beds against the far wall, and another put his foot on my mattress so that I could see his wet, hanging penis as he climbed up to the top bunk. The woman collected shapes from the floor and put them over her body. She lit a cigarette. I could see the red tip like an approaching signal as she smoked, walking towards the bed. She sat down on the edge of the mattress and blew smoke into the air. When she finished, she wet her fingers and crushed the lit end between them.

Maybe she wasn’t conscious of the present. Maybe the night and the sex and the time she had just spent thinking, took her to another place. She lay down on the bed and pulled the sheet over her body. She wrapped a naked leg around my waist. Her skin was cold and tough. She murmured a few foreign words, and then was silent. I looked out the window at the moon, white like a peeled apple. The woman played with the tuft of hair on my chest. She moved her hand up to my face and drew her long, bony fingers along my cheek, down my chin to my neck. She squeezed my neck until I could barely breathe. I pried her fingers away, and she turned over with her back facing me. I put one arm under her head and the other around her arm and belly, and pulled her into me. She was very thin, her hair smelled like dust.

Patrick Dacey’s fiction has been published in BOMB’s First Proof, The Greensboro Review, Guernica, The Washington Square Review, Salt Hill, West Branch, and Stone Canoe, among other places. He has recently completed his first novel and is at work on a collection of short stories. Listen to Dacey read his short story, “Patriots,” for BOMB’s Fiction for Driving Across America podcast here. For more, go to www.patrickdacey.com.