The complexity of categories. 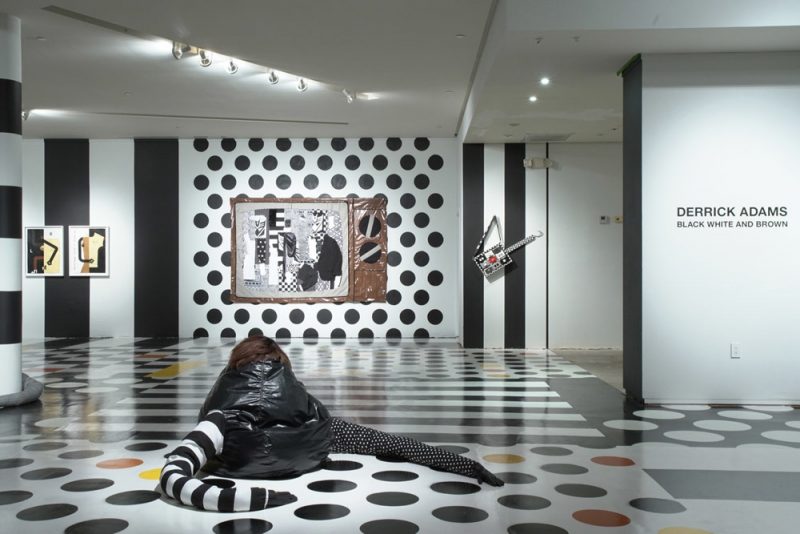 The title of Derrick Adams’s current show at Primary Projects, Black White and Brown, is a literal reference to the brown body, placed in a geometric and shifting environment of black-and-white forms. Adams’s oeuvre is massive, and while much of it draws inspiration from television—specifically the depiction of black culture and the ways it is coopted en masse—it is too big to define it as such, despite the humor and real poignancy of that work (watch the Sesame Street-inspired video interludes from his performance, Go Stand Next to the Mountain, 2010). His repertoire is a kind of collage.

A more specific thread is Adams’s ability to get at the heart of whatever he is exploring by transforming, dramatically, how it’s viewed. When his Culture Club paintings, 2014—depicting black men, women, and children reveling in summertime bliss—were shown at Project for Empty Space, he placed inflatable pool toys in the gallery, specifically for visitors to lounge and revel. When he premiered ON at Pioneer Works, Adams turned the space into a multi-channeled TV set, with rows of SMPTE color bars acting as backdrop to performed scenes.

For Black White and Brown, which features new work and previously unavailable segments from past performances, Adams created an Op art installation to house his collaged forms of sociopolitical commentary, destabilized identities, and good humor. There is—always—an underlying educational component, almost by virtue of the work’s existence: “Here,” it seems to say, “look at us this way.” 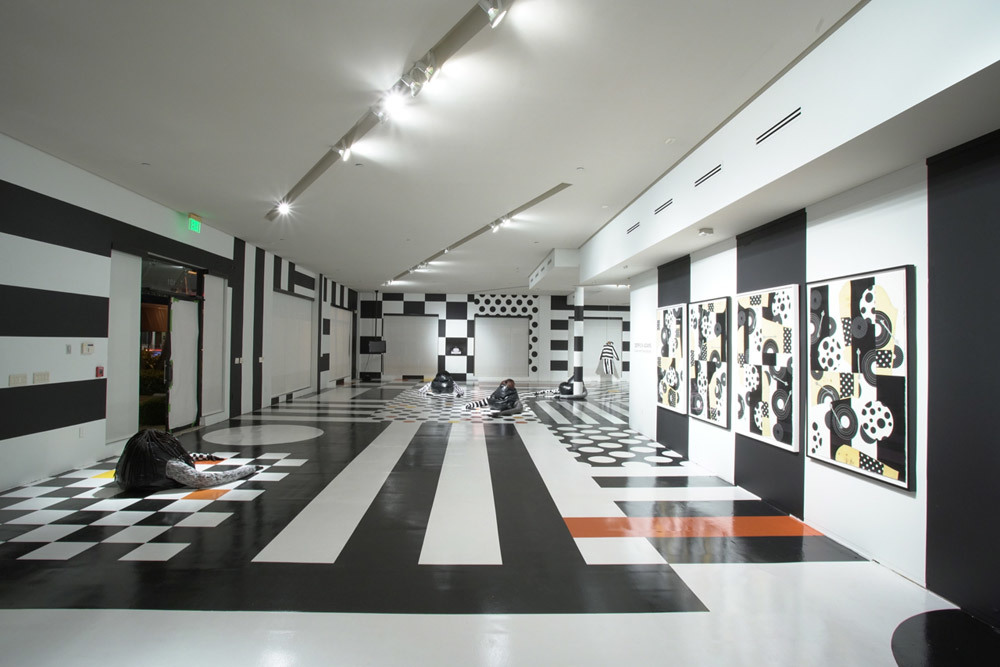 Monica Uszerowicz Tell me about Black White and Brown. It’s a showcase of both previous and unseen work.

Derrick Adams When I first thought about the content for the show, I was considering my performative works, objects that I’ve used in my performances, and how they would come together as a complete installation to emphasize these performative interests. I created an optical grid of different black-and-white interior geometric forms. Some other work had a consistent amount of figuration, in which I was often the subject, as well as objects that primarily consisted of black and white, with the figure as the black body. The black body would become the representation of “brown” in Black White and Brown.

MU You’re frequently inspired by television, how stereotypes are portrayed on TV, how we ingest them. Now, media is different—there are many different types of “screens.”

DA A computer is a television; a monitor is just a monitor. It’s not the same format, but you can have a channel on YouTube or Vimeo, and if you don’t have a channel, you can just have an account. If the television itself, the object, no longer existed, it’s still about the portal—looking into things. People now have more control—or think they do—over what they watch and how they consume images. The idea of cultural representation has flattened out. 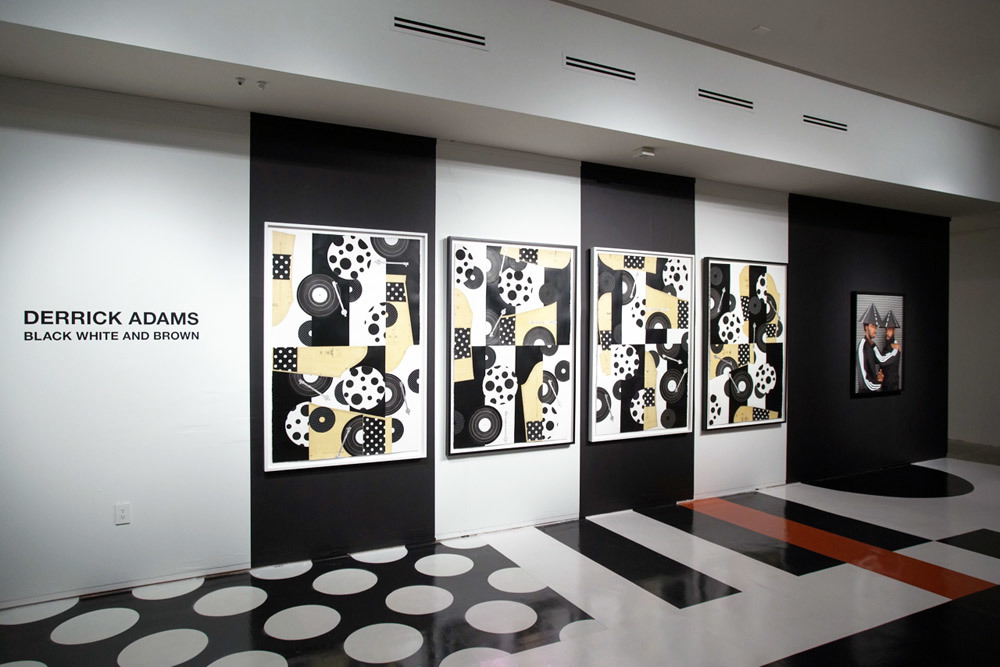 MU In dealing with cultural representation, you’ve spoken about maintaining a double consciousness of yourself, as someone seen as an “other.”

DA I’m a black artist—and I’m also just an artist. I’m American and educated, but I come from Baltimore, an urban space with various socioeconomic groups of black people. For me, this work is much more complex than a television show, or something that can be condensed into an hour-long program. It’s about understanding the complexity of black people as much as people understand the various ranges of socioeconomic structures of white people—which is equally as contrasting.

The black figure has always been a subject of entertainment in popular culture, as well as an image to sell things. In some ways, that’s how people relate to us—because they’ve seen us on television. But there’s a whole other part of black culture, one that talks about education, scientific innovation, the inventors of objects. There’s so much information that people are uncovering now that most black people know already. I think, due to a lack of education, a lot of people are unaware of the complexity of the category of “black” and of the achievements black people have accomplished.

MU None of this should be a secret; it’s the way history is presented.

DA Even in educational systems, kids learn more about the oppressive structure of Western culture than they learn about the achievements of people of color in opposition to that structure. It would really empower younger generations to know that during times even more critical than these, black people were able to prosper and make a positive impact on the world—that living in oppression is not our only legacy. In one hand we can raise a fist in solidarity against oppression while in the other raise a glass in celebration of our achievement.

MU If you can’t find these stories in the traditional educational system, sometimes it becomes the responsibility of alternative educators or artists to show the multitudinous nature of a particular culture.

DA That’s what I want to do with my work. I want to talk about what’s not necessarily on the surface—for people to find when they’re looking for reference material and inspiration, and to expose certain histories that aren’t visible. We need a counter-conversation about what’s been achieved within this constant struggle. Some of the inventions created and the progress made by black people, others are benefitting from without even knowing the origin of where they came from, who created them. As an artist, it’s a good challenge to have, because you’re translating these facts into visual experiences.

MU I like that your work directly engages the audience, too. It’s experiential and accessible even for people who aren’t artists.

DA I’ve never thought of my work or conversation as solely geared toward my fellow artists—not because I’m not interested in having a conversation with them, but because I realize that once you’re indoctrinated into the institution of art, that becomes your language. But I think you lose a lot in speaking to the general public when you’re part of those institutions. For me, it’s more of a challenge to maintain a sense of directness with the audience, to learn to speak to the people you grew up around.

MU This is probably why you’ve been able to show your work in so many different settings.

DA Yes. When it comes to the question of “not the white cube or the white cube,” I don’t think you have to choose either one. I think you can transform any space into one that’s open and engaging to any group of people. It has to do with the artist’s and the space’s intentions—who is their audience? No matter what space I’m in—a museum, an alternative space, a high-end gallery—it’s always more about my conversation, and, within that, a consideration of whom I want to be there for and whom I want to be in conversation with. 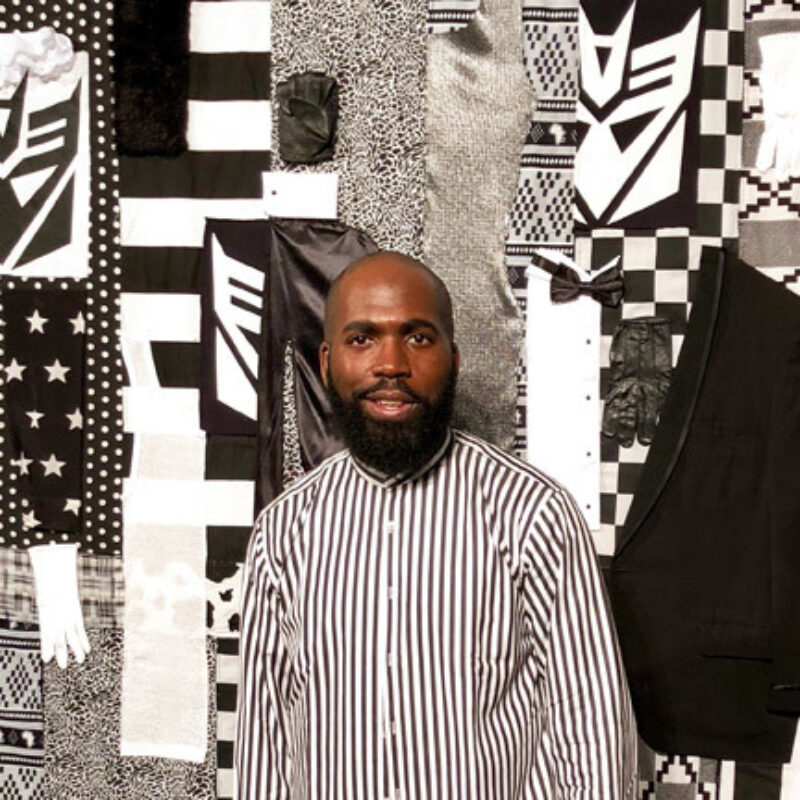 MU In some of your videos, there are elements of shows like Sesame Street and Schoolhouse Rock. There’s an educational component in showcasing complex histories.

DA I grew up in the ’70s. When I started to think about where my art comes from—because I often talk about media and television—I thought of what I watched as a kid. Shows like Sesame Street and Electric Company were pioneers in diversity. Those educational shows represented a level of multiculturalism that was rarely seen on other programs then, but is now seen more frequently in visual culture. That was a perfect genre to tap into to talk about some of the things I’m interested in, especially when it comes to shaping people through visual culture.

My undergrad degree is in Art Education. I’ve taught elementary school, and have noticed that the visual imagery shown in schools becomes a big influence on the way kids see themselves—not in a direct, literal sense, but more subconsciously. It plays a major part in self-empowerment. That got me very interested in using the educational structure for making work. I try to acknowledge many different institutions of creative practice, and I want to utilize these platforms to talk about their complexities. I’d like to open up the conversation, to show people there are options—there are ways to critique these systems without necessarily tearing them down or breaking them apart. You can build on top of a corrupt system to overshadow it with information that is more inclusive and historically factual. I’m not sure we’re in a place where destroying anything can be more effective than building something on top, causing a transformation. But time will tell.

The show at Primary Projects acknowledges very different facets of what I’ve been making: a video of a puppet performance called Reality Bites, which I presented as my stand-in during a series of artist readings from the Museum of Modern Art’s library—I had selected two Jim Henson titles—and another of my performances, entitled Finding Derrick 6 to 8, 2016, at the Metropolitan Museum of Art in front of Sol Lewitt’s Wall Drawing #370. My own interests as an artist are combined with my interest in other artists and their practices, to show commonalities and differences, to expand the dialogue and introduce new ways of viewing form and content. I’m hoping to present other ways of seeing a particular subject, so that viewers, who might have thought that it had nothing to do with them, can become part of the conversation.

Black White and Brown continues at Primary Projects in Miami, FL, through February 28.