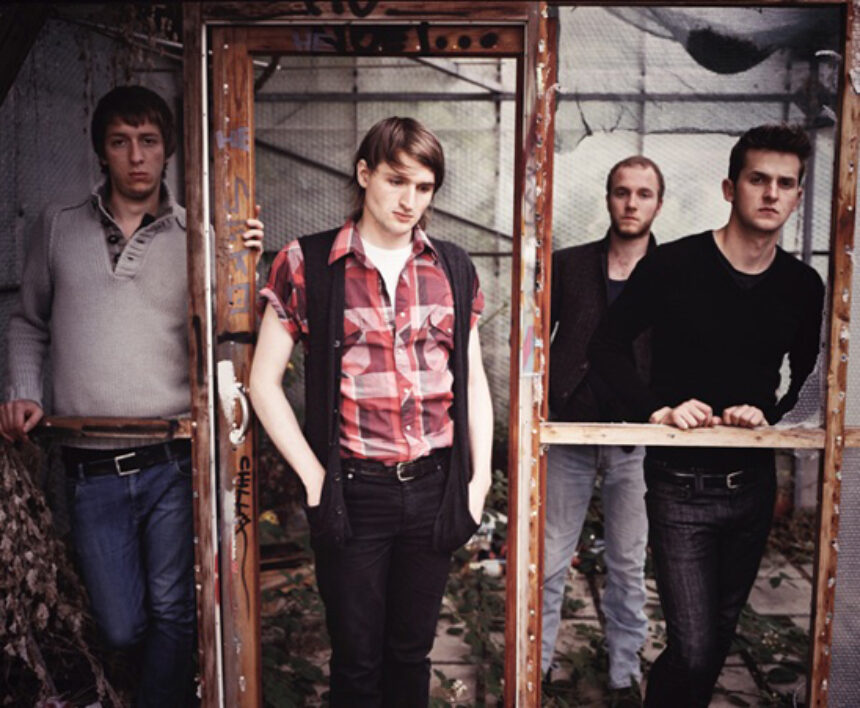 There’s a great jolt of indecency in everything Wild Beasts does. Communicated via Hayden Thorpe’s startling falsetto filled with hissing sensuality, the lyrics tell tales of nighttime wickedness. In “We Still Got the Taste Dancing On Our Tongues,” Thorpe sings “Trousers and blouses make excellent sheets / Down dimly lit streets / Why should we feel bad for what we’ve done? / We still got the taste dancin’ on our tongues.” The percussion charges on with primal effect. The guitars sound rebellious and overflowing. And the bass is, well, sexy. The music holds the sound of riots and angst, as brash as teenagers, but they’re no teenagers. Thorpe and drummer Chris Talbot are 24, guitarist Ben Little is 23, and bassist Tom Fleming is the oldest at 25. In their early twenties they’ve managed to channel their formative years without getting mawkish. Instead, the outcries and desires in their lyrics are mature, seeped in poetry.

With the release of second album Two Dancers in September 2009 (Domino)—a more succinct and realized collection than the promising debut Limbo, Panto —Wild Beasts has carved itself a nice niche in the UK and US music scene. The band will kick off its first US tour today in Los Angeles and take a bow at Music Hall of Williamsburg on February 28. Fleming and his mates are excited to be Brits in America, tourists of the things we Yanks take for granted. Here he discusses the long road ahead—both physically and figuratively—and the brimming sounds of sin so akin to Wild Beasts.

Paola Capó-García Tell me about the upcoming tour, it’s your first big US tour. What are you excited to see?

Tom Fleming This is sort of always the case, that we are going to the places we always dreamed of and not seeing any of them. However, meeting like-minded people in these places is amazing. Apart from being vindication of your youth, it’s also just plain fun to hang out with people and make friends on the road. I can’t tell you how precious a thing a sounding post is. There are some places we’re seriously looking forward to. We have guides waiting for us in Los Angeles, San Francisco, Chicago, Toronto, and New York, at least, and I have a mental guidebook of things I’d like to see. Though admittedly I’m probably not going to get to see the Grand Canyon, Arches National Park, etc. We do have a three-day drive through the Rockies and the Great Plains, which will be the farthest inland we’ve ever been by some margin.

PCG Do you take anything with you to make the long trips easier? What’s being on the road like?

TF We are all friends of some vintage, but inevitably we listen to a lot of music and read a lot, watch films, play violent computer games—catharsis. I find it hard to listen to new stuff on tour, as you tend to need a safety blanket of familiar songs. It’s rare that just looking out of the window isn’t entertainment enough also. One thing that does bother me is that it’s impossible to reciprocate all the love you get on a successful tour. How do you thank someone who likes what you do and has come to see you? How do you not disappoint them by being ordinary and probably very tired? Troubling.

PCG What is the main difference between Limbo, Panto and Two Dancers?

TF All the songs were written in a very short period of time, from the same small pool of ideas. All the songs are brothers and sisters on this one, of the same womb. We have a demo of about 15 minutes of music, which contains all the ideas that were on the album. I think we realized that ideas are small and that songwriting is a series of decisions. There’s no need to wait for the muse to attend. We trusted ourselves and what we’d learned in making Limbo, Panto and put it into practice, [regarding] arranging, production, pacing, etc. I think this album is less frustrated, more knowing. It’s sadder maybe, but it’s optimistic. The first album was released at a pretty shitty time for music in the UK. I think it’s a lot healthier now.

PCG The band has been together since 2002, but you joined a little later. Can you tell me anything about the origins of Wild Beasts? Your sound is very specific. Was the sound formation accidental or conscious?

TFThank you for saying this, I hope we sound the most like ourselves we can. It’s important to realize that this band sounds like whatever you tell it that it’s going to. You realize the power you have and that the only restrictions are your own limits—or cowardice. We’ve become better at incorporating our influences. I suppose in some ways I’m the least distinctive element in that you have Benny’s guitar sound, Hayden’s voice, and Chris’s skittering percussion stuff. But my initial task was to help knit it all together. Now we’re understanding better the accidents that happened to get us to sound this way, and learning gradually how to use what we’ve got. We really have only made baby steps thus far, and I don’t see how we could have done much more really. I hope we can stay interested for a long time to come.

TF I think it’s sort of inevitable. I also think it’s important to try and forge your own mythology, so I would hope our music comes from our view of where we’re from, rather than anything objective. A lot of our favorite music is British, but you always want what you don’t have, so a lot of it isn’t. I think the best music carries an imprint of the situation it was made in and the worst tries to imitate it without understanding it.

PCG You said the recent songs come from “the same small pool of ideas.” What are three specific ideas you explored in Two Dancers?

TFI guess sexuality, desire, and what it feels like to be an individual. How you never know what someone else is thinking or feeling, or what the effect of your actions is on another person. The album is designed like stepping through doors and finding something behind it, and not knowing what it is until you’ve left it behind for the next one. This feels a bit indulgent, describing it abstractly and in retrospect. So much of this record was made on musical instinct and interplay. It was designed in the act of making, rather than being made to concept.

PCG What’s your definition of a good song?

TF I guess to be put in someone else’s place.

PCG I always read reviews of you guys and the word “literate” gets attached to your music a lot. Does that stem from any of your literary backgrounds, if any?

TF There are some books that found their way onto the album. There’s direct and indirect stuff from Hélène Cixous, Angela Carter, Ted Hughes. This album was all about editing and reducing things, chipping things down to the essentials—hence everything getting down to sex. But not just lyrically, this album is all about the drums and percussion really. They are the center point of the album and what makes things happen. The lyrics, along with the music, are glimpses of things, little images that are supposed to tell a story without having to go through the agonizing banality of “telling a story.”

PCG Your sound would point to one, but do you believe in excess or minimalism? You talked about condensing the concepts for Two Dancers, but your sound is still so big.

TF Thanks, we did want it to sound lush, and [producer] Richard Formby did a great job of getting us that, but efficient and taut. It’s arranged like dance music, formally and repetitively. We’re chopping off the fat all the time. I can understand when people talk about the excess of the first album, but really that was an attempt to cram a load of ideas into a pop-song frame. On the second one we took a few ideas and made them do some heavy lifting, which I think worked much better. I have an idea what we’ll do next, but it would be a mistake to talk about it when doing it is much, much better.

PCG When do you plan on recording the third album?

TF We’re thinking of it all the time. We’re very busy at the moment, so we have to wait for the dust to settle after touring. We have to be able to get to our desk.

PCG Was your intention always to make music your career?

TF Career is a bit strong, there’s not a lot of money here. I’ve played instruments and listened to music since the time I was a very young child. I think I saw it as a way out of “mundanity.” I have a different view of it now, but it’s always something I’ve wanted to do. I suppose I can get the best out of myself this way.

PCGYou say you make no money, so how do you measure success? Have you felt it?

TF Growing up I, and we, felt like music was something that happened above our heads and didn’t belong to us, like it was happening elsewhere. I hope that we can give these kids a voice. It sounds ridiculously grand, but there it is. I think we sort of offer a challenge in that we’re not the sort that normally gets this far.

PCG Are there any bands or artists you’d like to play with—living or dead?

TF Living or dead? Oh my God. Joanna Newsom, as much for her striving as for her songwriting. We’re not good collaborators, we’re quite set in our ways, but we started accepting remixes, and that’s been an interesting process. I prefer to be fucked with than pandered to, to be honest.

TF Very Jekyll and Hyde. Right now it’s up, shower, coffee, van, gig, sleep, repeat. When we’re not touring, it’s all early nights and porridge. I swear it ages you.

1. Good Mexican food: we weren’t fond of Mexican food, then we realized we’d never had it until we crossed the ocean.

2. San Francisco: “the coldest winter I ever spent was summer in San Francisco.” I think that’s Mark Twain. I just think it looks very pretty and antithetical to what we’re used to over here.

3. The music culture: music seems more intrinsic in the USA. This might be a romantic outsider’s view, but I bet I’ll be proven right.

7. Finding our music has travelled much farther than we have.

8. People asking where we’re from.

9. The chastening realization of the reality of a three-day drive.

10. The fact that all the above will be wrong and we’ll have been blindsided by 10 totally different things by the end of the tour.

To find out more about Wild Beasts, check out their website.