The artist’s works amend the white supremacist mythology contained in American monuments and historical paintings: “Democracy requires a clear understanding of the past, including its mistakes.”

Part of the Theory + Practice series. 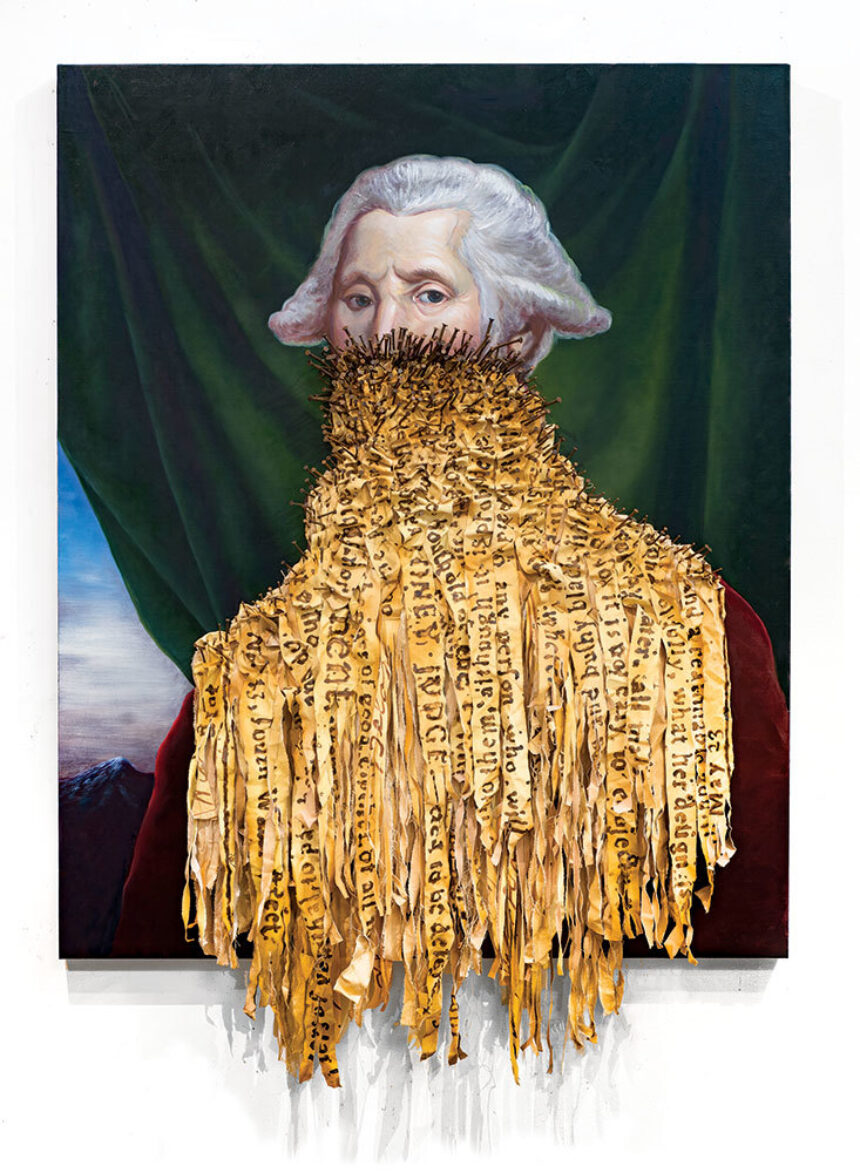 Absconded from the Household of the President of the United States, 2016, oil, canvas, and rusted nails on canvas, 60 × 48 inches. Photo by Jeremy Lawson Studio.

Theory + Practice is a series supported by The Andy Warhol Foundation for the Visual Arts and the Shelley & Donald Rubin Foundation.

America thus stepped forward in the first blossoming of the modern age and added to the Art of Beauty, gift of the Renaissance, and to Freedom of Belief […] a vision of democratic self-government: the domination of political life by the intelligent decision of free and self-sustaining men. […] It was the Supreme Adventure, in the last Great Battle of the West, for that human freedom which would release the human spirit from lower lust for mere meat, and set it free to dream and sing.

And then some unjust God leaned, laughing, over the ramparts of heaven and dropped a black man in the midst.

It transformed the world. It turned democracy back to Roman Imperialism and Fascism; it restored caste and oligarchy; it replaced freedom with slavery and withdrew the name of humanity from the vast majority of human beings.

Fascist ideology extols the past. Though the past, in fascist ideology, is never the actual lived, complex reality experienced by different groups but instead a myth in which a nation’s men are idealized as dignified generals and honorable conquerors. In the United States, our version of fascism is based upon the dogma of white supremacy. Our fascist myth-making involves priding ourselves in distorted narratives of white men conquering the plains, winning wars of independence, and becoming prodigious industrialists. When today’s politicians engage in such views, we can easily recognize and expose them as white supremacist myths. A good education now can be expected to lead to the right response. Yet in order to protect ourselves from fascism, we must also attend to the ways in which such myths enter into our lives unchallenged. We must be sensitive to how museums and galleries help facilitate fascist myths and allow white people to find comfort in visual narrations that perpetuate white supremacist views of the past. It is here that Titus Kaphar’s work is so vital. 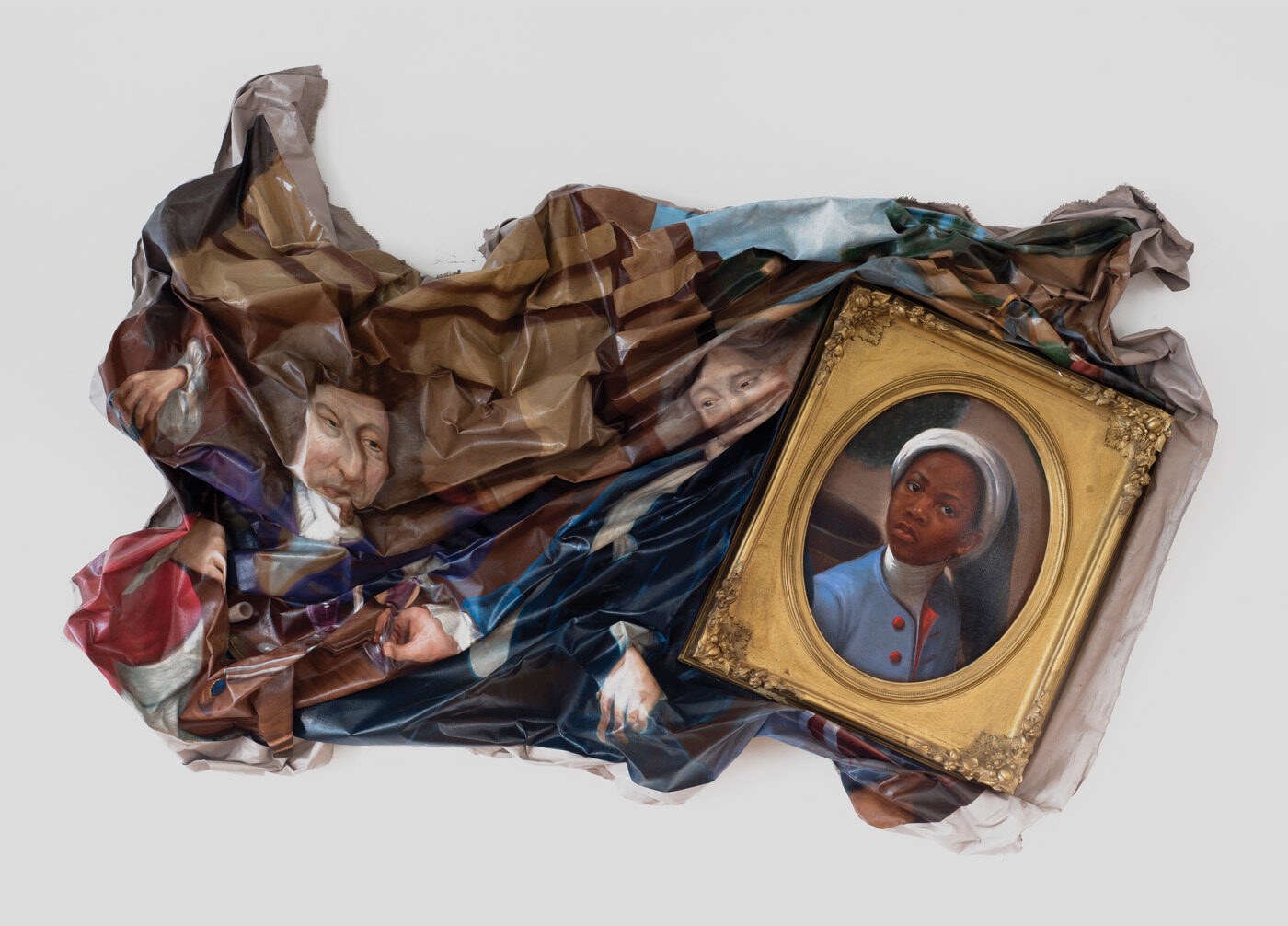 Enough About You, 2016, oil on canvas with antique frame, 45 × 70 × 5.5 inches. Photo by Jeremy Lawson Studio.Images courtesy of the artist, with special thanks to Jack Shainman Gallery and the Yale University Art Gallery.

Jason StanleyYour work reflects your understanding that Americans are conditioned to accept the white supremacist myth. Our culture and education still largely demand consent. Much of our cultural heritage, in particular our historical paintings, reveals the grand self-regard of past white elites. Any American, at a moment’s notice, can call to their mind’s eye one of George Washington’s heroic depictions in oil. And even though official histories have been modified to reflect the fact that it wasn’t just whites who have experienced time, visual culture remains largely unchanged and questionable representations of the past are kept on display. Would you say that we are required to amend these artworks?

Titus Kaphar The idea of “amending” our national monuments inspired my series Monumental Inversions, a growing body of sculptural work that’s currently manifested in wood, glass, and marble. The idea of amendment came after a trip to the Museum of Natural History with my two sons. At the museum entrance stands a massive equestrian sculpture of Theodore Roosevelt. He sits, boldly controlling the animal with one hand while a Native American and African American in anachronistic tribal garb walk on either side of him. As we approached, my son asked, “Who is the man on the horse? And why does he get to ride while they walk?”

It’s not enough to rename our buildings, tear down our statues, and deaccession the relics of our flawed past. It’s simply not enough. What is to be done with the monuments that stand in direct contradiction to the constitutional edicts that we hold most dear? The provision for amendment in the Constitution is integral to our national identity. It documents the mistakes of the past alongside revisions of an evolving present.

JS With your amendments of historical paintings and monuments, you’re not disrespectful to artistic tradition. Quite to the contrary, your work is an homage to the political power of art. It forces us to confront the notion that our artistic traditions reflect the weakness of our democracy and, with that, are a causal factor in our susceptibility to fascism. Your work undermines the fascist representations, replacing them with a more democratic and accurate narrative. If we don’t challenge these false narratives (which were meant to dictate future generations’ views of our past), if we continue to let them live with and within us, these myths will become part of our individual psyches and individual historical narratives.

TK Much of black history recorded in Western art is summarized visually by three roles: enslaved, in servitude, or impoverished. But beyond this limited social order lies a people of dignity and strength, whose survival is nothing less than miraculous. My work seeks to illuminate the faces and figures whose presences have been conspicuously undocumented in Western painting.

In Seeing through Time, two paintings are overlaid to create a fictional, dimensional time warp whereby the removal of the European character from the painting creates a space for a young black page to encounter a contemporary black woman. They exchange a gaze. These two paintings create a conversation between the historic and contemporary representation of black people in painting.

Similarly, Enough About You appropriates a historical painting of a young black male in servitude, sourced from the Yale University Art Gallery. In the scene, the founder of the University is seated among three acquaintances and attended by a boy whose enslavement is announced by a silver lock and collar around his neck. Originally a poorly rendered, burlesque black caricature, the boy now exhibits gently painted features and glowing brown skin. His collar has melted into a cravat, to further signify his independence. I strongly believe that if we don’t amend history by making new images, we will always exclude the historically marginalized in our society as well as in our art.

JS In the final chapter of Black Reconstruction, “The Propaganda of History,” Du Bois writes:

War and especially civil strife leave terrible wounds. It is the duty of humanity to heal them. It was therefore soon conceived as neither wise nor patriotic to speak of all the causes of strife and terrible results to which sectional differences in the United States had led. And so, first of all, we minimized the slavery controversy which convulsed the nation from the Missouri Compromise down to the Civil War. On top of that, we passed by Reconstruction with a phrase of regret or disgust.

But are these reasons of courtesy and philanthropy sufficient for denying Truth? If history is going to be scientific, if the record of human action is to be set down with that accuracy and faithfulness of detail which will allow its use as a measuring rod and guidepost for the future of nations, there must be set some standards of ethics in research and interpretation.

In the current political moment, we bear witness to the corrosive anti-democratic effects of letting myths and lies go unchallenged. Democracy requires a clear understanding of the past, including its mistakes, as a “measuring rod and guidepost” for our collective action. Only when all are free from delusions of past glory can democracy be envisaged at all.

Theory + Practice is a series supported by the Andy Warhol Foundation for the Visual Arts and the Shelley & Donald Rubin Foundation.

Jason Stanley is currently Yale University’s Jacob Urowsky Professor of Philosophy. He is best known for his contributions to philosophy of language and epistemology, which often draw upon and influence other fields including linguistics and cognitive science. He’s the author of, most recently, How Fascism Works: The Politics of Us and Them (Penguin Random House, 2018). His current project is a book on the non-ideal philosophy of language, The Politics of Language, co-authored with David Beaver. 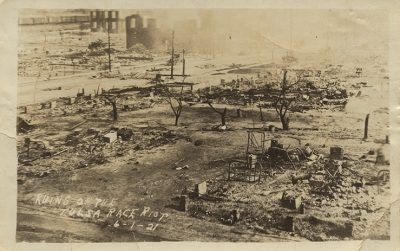 we consummated our marriage / on a bed littered with sour faces / of dead presidents, liberated livestock / sweating through the dollars. 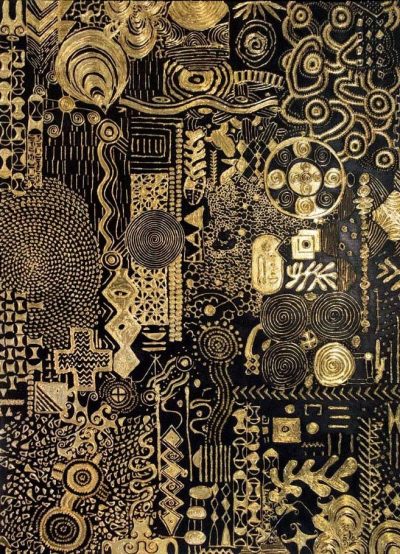