Somewhere on the crossroads of history they stood: the pillar of Salt and the pillar of Fire. They stood where the ancient Sphinx would later sit; and that was just as well; they were more ancient; the Sphinx was not the sole symbol poised on a crossroads.

The pillar of Salt often spoke to the pillar of Fire of the vulnerability of Fire, of its rival element, Water (of whom Fire had no lasting knowledge), that Water was more powerful than Fire, and that it would win out in the end—for a sufficient amount of Water would smother any Fire, but no size of Fire can swallow an ocean. So intent was the Salt pillar on explaining the imbalance between the two elements, one wondered what inscrutable reasons it may have had for doing so.

When at length the Salt pillar fell silent, the pillar of Fire would reply: “I may stand here for eternity, but I cannot be chained. I have more freedom than Water does. There is rarely Water enough to put out a real conflagration. I too rain from the heavens, but to convey the gods’ fiery wrath. I get along splendidly with Brimstone, as the world has yet to witness. But I will consume settlements well on the way to consuming themselves anyway. I will also fill hellish lakes, licking the bodies of sinners, when all Water does is wash away, dilute, sin.” The Fire pillar would then point out that Fire had more potential for pillars of Fire than Water had for pillars of Water, for Fire spreads wildly, but Water engulfs lethargically; that, finally, the amount of Fire is infinite, while that of Water is finite, and that Salt, though plentiful, takes longer to form than Coal.

In response to these boasts and sophistry, the pillar of Salt would take to explaining its value to the Fire pillar. “I transform Water into oceans and seas. I preserve flesh from putrefaction and dehydration. It is I who designate the very noblest of humankind: the salt of the earth they are called. I am also the gold standard in resourcefulness. And one day I shall become a symbol of freedom, as the oppressed of the earth march over land taken from them and reclaim what is theirs. I am the column of human endurance and willpower. And, lest you have forgotten: men have turned into me upon seeing God.”

In its turn, the pillar of Fire would remind the Salt pillar that saltwater does not appease thirst and that salting the earth makes land barren and useless to humans. It would then mention the Titan Prometheus, through whose intervention Fire formed a special bond with humanity. And Exodus, when God rose in its form to light the way for his Chosen People. “Compare that with Salt’s bond,” it would taunt—“Even in your two forms, solid and liquid, you are hardly my equal in utility. You wait to be extracted from mines through beastly labour and blood sacrifice—man curses you. All I need is a spark to ignite and a gust of wind to spread. You may preserve—though cold Air and solid Ice work better without your help—but as for preparing their food, I am superior. You are a taste on the tongue; I consume them live. You are a symbol of skepticism; I strike fear and reverence on the gods’ behalf.”

Once, Salt conceded to Fire: “Granted, you cannot be easily contained, as Water can. Floods may engulf cities, but Fire burns all to the ground. Yet, like Water, you wreak destruction, and your will is too righteous, too wild.”

At this Fire confessed to Salt: “The earth is toxic. Every window is streaked with dust. I can hardly breathe. Am I wrong to think only of urban blight, of the inertia of plastic, of tumbling exhaust, of mushroom clouds? Am I wrong to lay waste and serve war? Have you heard of the endless season of nuclear winter? I have done evil, but only in the hands of gods and men. I do not repent, for I am blameless. There is no ill to Fire, only to the use of Fire.”

Thus engaged in their exchange, the two pillars became the story of civilization. And when, over time, the pillar of Salt began to crumble, the pillar of Fire moved closer to it, and when the two came into contact, the Salt pillar did not light up like a torch. The fiery tongues licked it until it melted—still Salt, no longer pillar. The Salt did not resent the Fire for reducing its stature so; it always recognized its own weakness and Fire’s strength. It was always an advocate of Water, but did not seek its protection.

For humankind, the sight of the Salt pillar’s collapse and prostration meant nothing. We carried on sustained only by the one, fiery pillar. We knew of the hoary dialogue of the two, some of us had even read of it. But we did not much care for Salt, its dogmatism and slavish piety. We stood awed by haughty Fire, branding our bodies with warlike symbols, burning sulphur to save our souls. (2006)

The smell of scorched wood traveled a long way, luring us back with the promise of a village no less intact than when we set it ablaze. Burning was once our innocence, the desire of youth, the comfort of old age. As children we watched fires till the self-immolation of sleep. When we were older, our loins, aflame, heralded the immolation of carnal union. All the while, we cauterized our wounds and lit sacred fires to mollify the violence of nature. We scorched our fields to nourish the earth. We prayed to comets, whose tails flared with divine light. We burned effigies of unknown marauders to strengthen our own bonds. But we awaited these barbarians with tense pride, with untested invincibility, and such inhuman anticipation inevitably consumes. Forced to abandon this world of waiting—for our village to be razed, pillaged, and defiled—we became the fierce brutes we so feared and wished to vanquish. Like a nomadic tribe renouncing home and name, driven onward by ancient blood lust, an alien cry for destruction. (2003)

The mid-afternoon sun overcame them. Outside flies swarmed with intimations of rain. The cavities of trees received their nightmares.

Their slumber carried on undisturbed. They dreamt for fear of waking, their dreams joint efforts at fending off a mournful morning.

Is there room for a dream within such dreams, for a recurrent caesura of ‘never’ become reality amid such oneiric mischief done to wakefulness by fresh, impossible possibilities?

The monstrous insect, the sleeping children, all the respiratory sublimation, the lubricious psychic activity seem more like a surrealist cliché than a scene that would read well, a narrated tableau vivant. Insect whose wings they heard, which woke them: forgive the twins their bliss and imagine yourself their nightmare—Wake them in their dream! Hum and thrum in the mesh of their sleep-spell and, for heavens’ sake, flit your wings over their limp bodies, disarray their blankets, their faces, electrify their nerves, stir their eyeballs under alabaster lids that ensconce their repose. Now, insect, is the instant to implicate yourself in the story—and what other stories shall follow. Burst through the screen!

Because peace is ever only their dream; peace is only ever dreamt with the strength of twins. Once woken in the dream, it too vanishes like the dust on butterfly wings, and turns hairy, bristled, and harrowing as a fly’s iridescent physiognomy. And then this sudden start, the wide-eyed disbelief of accident, startles the dreamers, so that they exchange glances—but not their fears; the telepathic threads hang loose. Thus the dream is shaken, and so it is shattered.

Twins, once woken, remain awake. They pass blame, they fear fear, the threat of wakeful dreams. The enigma of the insect which can only be solved with sweat, semen, and blood that were not there before; with some help from entomology the twins identify it as Abhorrenta disgusta. Nothing out of the ordinary, save that they dreamt the species concurrently, and the few ounces of fluids that flowed between them then coalesced without their slightest ken. The disturbance approached their bed like an unwanted coagulation, shifting covers and exposing the sleep of twins, who were just then waking up to it.

Oh the miseries of an interrupted dream!

S.D. Chrostowska is the author of Permission (Dalkey Archive Press, 2013). She lives and works in Toronto. 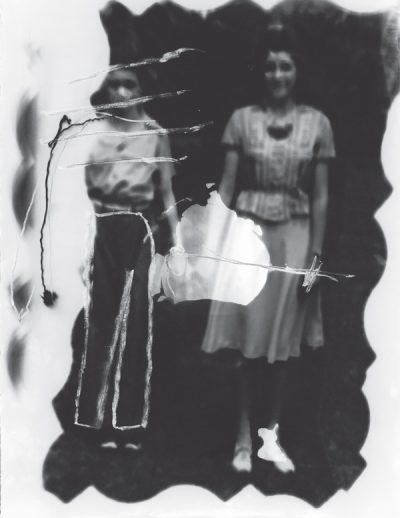