April, the Meadowlark back on his post
with ex-cathedra powers of speech—
singsong fence sitter, he lets his wishes rip.
The pairing off in earnest has begun.
Spring-loaded and girl-crazy, he flares his yellow
belly, learns the shout out ways of bringing in.
Up above, blue sky and Kestrel hover,
his flutter hunt a little more proactive.

Quo last night talked with plumage named to-die-for,
a red star on her neck—we talked of
looking back from halfway up the ladder
to confirm both momentous and miniscule.

Quo would carry the eponym imperfect
and still wake to gold-stick willows ready
to shake up and green-leave the good world.
He walks by a sun-willing creek and thinks
that what the world spends the Hawthorn suffers;
sometimes up empty and sometimes sated
the Kestrel and his hover-hunt will come.

It’s in the very bones of larks to sing
and song’s an exponential reckoning
that offers up the sky if I were, I would.
Little subjunctive bird, what will you do?

Quo you’ve got a sky so big you’re feeling all Duomo today—
late afternoon light at your back and the bells going off yet again,
it’s all about weddings, every knell a union of broken wing and whole bird,
of breeze and sky, of loved ones dying and those who’ll rise in stead.

Love in a city of burnt red roofs is all roses, Quo,
sans the big blood orange of sun descending a mackerel sky,
the back of some god’s head walking down some readywisp stairs.
Soon the rooks will give the bats their air rights, the rooftops
where you’ve climbed to see the last light steep the city.

You walked a set of steps so steep you said the word belfry
over and over until the winds ceased and the flowers sprang up
as if you were a bat and could command a flight path all pollen and sweetness.
What a bird you’ve got, a Paraclete on your shoulder, the lookout-gone-lookup.

It’s a world of shutters and window boxes, of Brunelleschi quitting
the work of figures after losing his chance at the baptistery doors.
The world said nothing; it keeps on saying nothing in this city
where the living do their living and high ground stays churchlike—

You look up and the steeples sing old songs of aspiration.
Call it spiritus mundi the motor scooters and tower bells go duo,
call it music rising upward, an aha filibuster;
all the secular annunciations of back-lit scenery
in a city called Florence fill with sunlight and bells.

Back to the banks of an old river
refreshed by a heavy, heavy rain:
I love a bit of largesse when the gray
matter wells up and lingers like a stalled front—
love the even better weather when high
pressure moves in and clears the sky of clouds.
I come back to my familiar confessions.
I rest on the laurels of St. Milkweed
or the willing daylily who listens
with her crooked ear and whose silence stays me—
does she take my ailments for her own
or does she possess them already
with a prescience preternatural and kind?

There is someone in the world I love
and she’s a flower called Texas,
because she’s big enough to hide in,
bigger than Quo with all his pollen baggage.
When your blossom’s so big, you can spare
a speck of rot or fetid petal flesh,
the flower so big it can encompass—
turn the transitive landscape of sky,
indifferent, clouded or stripped dry,
a quick reflexive blue, renewed,
a welcome little void waiting to be filled.

Michael Morse lives in Brooklyn and teaches at the Ethical Culture Fieldston School. His poems have recently appeared in Agni, Tin House, Frank, Fine Madness, and Spinning Jenny. His essay on Wallace Stevens appears in The Alphabet of the Trees, an anthology published by Teachers & Writers Collaborative.

The Dead Man by Joshua Harmon

This First Proof contains the story “The Dead Man.” 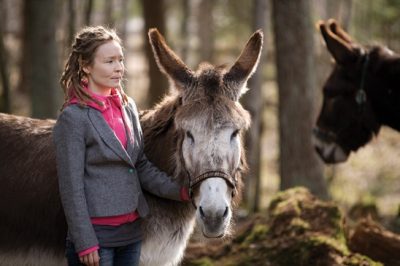 “Breaking up perspective has long been one of the central themes in my works.”