In these epistolary poems, taken from Megan Moriarty’s adventurous collaboration with fellow poet Brian Trimboli, the dark night of the soul takes on new dimensions of eccentricity and horror. Marked by their own twisted pulchritude, these missives from the edge of existence grapple with the grotesqueries of loneliness and longing, with fates more dire than death. Rendezvous with Brian here. 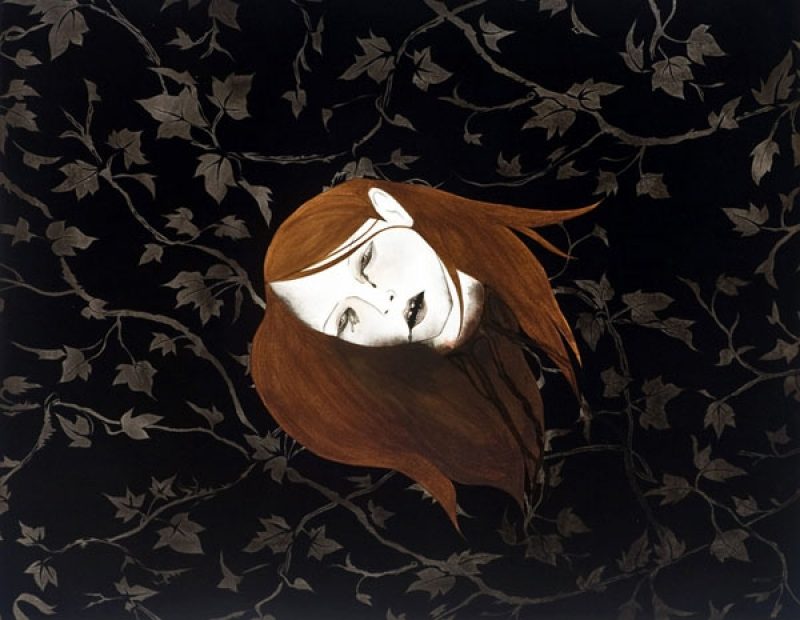 Marci Washington, From Within, 2009, watercolor and gouache on paper, 18 × 24 inches. Courtesy of the artist and Rena Bransten Gallery.

from Notes from a Zombie Apocalypse

Dear Brian dear you I think

I see them coming long before I can smell anything

I’m running out of ammunition haven’t eaten in days

sitting on the roof of an empty house unless you count

you would like and in the early afternoon the sunlight

kisses most of it the arms especially I take turns

pressing my face against each of them.

The banner attached to it reads

See It Anymore. Each day it seems

I’m farther away from the ocean.

An old man greets me as I approach

his home, his arms outstretched,

his limp, the blood pushing through

his faded jeans. He’s too delirious,

too tired to realize or understand

that he’s infected. All he understands

is that he was alone and now he’s not.

Finally, finally, he thinks that what

he’s been waiting for has arrived,

so I pretend that I’m exactly that.

from a nearby branch as I listen to his account

of the past few days, his life on the farm,

and when he starts to change I put a bullet

in his head. He had been cooking us dinner

when it happens: beans. Finally, finally,

a fire and a voice that’s not my own.

I think I see you everywhere: I’ve managed

to circle back north: the snow doesn’t seem

I didn’t see the owl for two days

and thought it must be dead but there it was today

perched on the branch that I was sleeping on.

I don’t think I’ll ever name it: there isn’t much use

for names anymore: I wonder if it has a name for me.

I think I see you everywhere: almost as often

as I see my breath: those little clouds that prove

The owl and I travel by day and hide

in the branches at night and I take aim: recently

every one of them I shoot resembles you: maybe

because it’s dark: maybe because my eyes are failing

me: maybe because your name’s the only one

that I now know.

Megan Moriarty left Staten Island in 2008 to pursue an MFA at Virginia Tech. Since then, her poems have appeared in Rattle, Indiana Review, Washington Square, Best New Poets 2009, and other publications. She plans to spend this next year working as an AmeriCorps member for High Rocks in West Virginia.

Marci Washington grew up in the Bay Area and received her BFA and MFA from the California College of the Arts in Oakland. She has been the recipient of awards from both the Anderson Ranch Arts Center and the San Francisco Foundation. Her work has been featured in the film Jennifer’s Body (2009), and she is regularly featured in publications such as Juxtapoz and New American Paintings.