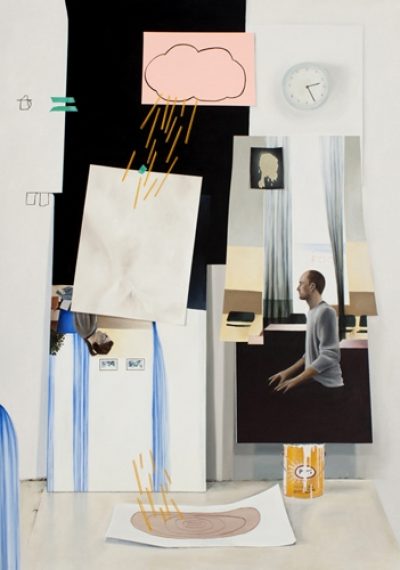 Pilgrimage Past the Written

Even when the book shut itself
for good, it continued to inspire you.

It provoked you to thumb through
its excremental dust. And so you shuffled

and sweating. You might have turned back
but what you’d left had already left you for dead.

toward nothing. The way ahead was the right way
because it was the only way and it was thinning.

Leading the way is your job
you said to your lame horse as it hobbled forward.

lifted its pasty bone and blasted its plaster breath
and broke itself into a cumulous of dust.

A hush fell and could not get up.
A needle scraping the grooves of a memory of an LP

of a ghost story flew out of orbit, scraping a new gouge
into thinking. You prayed as best you could

under the circumstances. A prayer of ditches risen
into walls
of white noise, a prayer of broken middle-ear bones,

a prayer of blindfolds and dead ends,
of white-wash rushing in from the left side

of the brain, a prayer of running toward and slamming
into the right
answer locking you out of its margin

of error, a prayer of bowing down and scraping at,
a prayer of primer under fingernails, of metallic-
tasting flakes,

on the other side of your right
mind. What separated you from what you heard

was that emaciated. But what you heard did not die
and instead grew bigger wings and bigger wind

whistled through what you now pressed against,
trying to hold back what already whipped about

you would have written down
if there’d ever been words for such a sound.

It might have been a tree once
or a sign or a post for hitching or hanging.
Though it lacked a leaf or word or hook
or rope, I knew it must have a reason,
if not a strategy, and I resigned myself
to stick to it. I lay down and curled up
at the foot of that post as a shadow would.
As the sun rose and fell, I stretched out
and curled up and stretched out
while the post continued to suffer
rigor mortis. Yes, I had found my calling,
and it was silent because it was dead
or, if it wasn’t, it might as well have been.
But I would not abandon my post.
(Though I did fall asleep for a time.)

When I woke, the darkness made me
indistinguishable from the post
as if I were half inside the earth and my legs
had fused into one leg, foot chopped off,
stuffed in up to thigh and sinking deeper still.
I wrestled with my thigh until I yanked
that post right out of the ground,
which turned out to be easy, rotten as it was.

It broke beneath my fingers as I dragged it.
I thought I might bury it faraway
in an unmarked grave that I would tend to
(and no one would know the post ever was).
But soon I liked how dragging flayed it
smaller and easier to drag and soon
it didn’t matter how far we went
or what I might do as long as it continued
giving in. Soon I dragged a slender stick
(I had to stoop to make it drag).
Soon I closed my fist around a whittled nub.
It was like an extra thumb, child-size
(a small abnormality I could hide, I realized).

Intending to crawl back from where I’d come
(to begin again, to reinvent my post),
I placed the post upon my tongue (for safekeeping)
and fell to my knees—my hands swept out—
hard, smooth cement where the earth had been.
No tracks to follow back. The post and I
hadn’t made a dent. In fact, the post no longer was.
I had swallowed it in my shock.

I could feel splinters planted in my gut.
Then something like a post-forest began to sprout.
I blinked and my eyes stuck shut as did my mouth.
I might have been mistaken for a post that was how
dumb I was
and blind. But I could still hear

whispering
in my hollows and notches.

I might have been missing
that was how empty I sounded

when even the wind hurried away.

One must have a mime of winter
to reenact the forest and the bowing
of the pinstriped director of the show.

Remember the junipers and spruce
made of green-dyed goose feathers?
Remember the Styrofoam snow

and the wind machine that produced white
noise on steroids? Remember our nostalgia
for cold, depopulated metaphors?

The sound of anything professional
feigning the natural is always poignant.
The wind on the soundtrack is a reminder

our thoughts and squeeze. Eventually,
noting what wasn’t became our best
weapon but also, for some, a kind of opening

to pick at until it appears to be our nature
to walk hunched over in order
to prevent our insides from falling out.

One must halve a mire of whimpers,
divide by a minefield of whiteout
and subtract a myna bird of witness

to equal nothing, the noter wrote
as she dutifully stuck to her listing
post. And what about the noted?

overs, which is the sound of the land
dying down, or the wind turned to low
in the same blaring place, beside this plastic

air conditioner, inside this droplet of
Antarctica, before this distant glitter
of your eyes melted down into coins.

Suzanne Wise is the author of the poetry collection The Kingdom of the Subjunctive. Her poetry can also be found in Legitimate Dangers: American Poets of the New Century and in recent issues of American Letters and Commentary, Bone Bouquet, Catch Up, Eoagh, Green Mountains Review, Guernica, Ploughshares and Quarter After Eight.