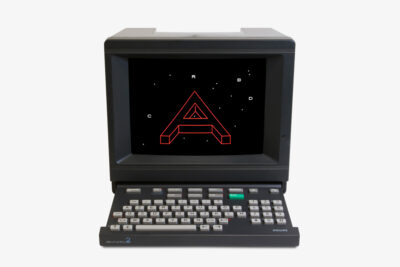 Auriea Harvey is an American living abroad, a digital artist making physical works, a sculptor working with blockchain. The mythical creatures apparent throughout her art resonate with the hybridity of her practice. She trained as a sculptor at Parsons School of Design before turning to computers in the 1990s and becoming an award-winning net artist and videogames developer. However, the sculptural thinking inherent to character design eventually demanded a return to sculpture. This spring she had a solo exhibition, Year Zero, at bitforms in New York City at the same time that the sudden rise of blockchain catapulted her into involvement with two platforms, bit.art and hicetnunc. She is currently participating in the group exhibitions Pieces of Me and The Bardo: Unpacking the Real. Harvey operates in the liminal space where the virtual and tangible meet.

Few artists have such extensive knowledge of software, hardware, platforms, and the internet as well as traditional composition and design, which contributes to the technical prowess and beauty of her work. Though blockchain is heralded as Web 3.0, Harvey has weathered similar tech enthusiasms. Currently based in Rome, she is awake at all hours working with artists around the world to explore the potential of blockchain and assess its limitations.

Charlotte Kent You recently shifted away from games to a sculpture practice and are now also involved with blockchain. What’s been inspiring that multimodality?

Auriea Harvey Honestly, blockchain presented itself as an opportunity to say something in a louder way. My sculpture process starts in the computer before I use 3D printing to make it physical. I combine the prints with various materials, like clay, stone, and fabric. I’ve enjoyed this very hands-on process, but born digital work is a win-win proposition, right now anyway.

In the best moments, I feel like NFTs are a license to make whatever art I want. The money is making more things possible in the tangible realm, like possibly getting a bigger studio, making larger work, using interesting materials. I want to venture further into these combinations of virtual and tangible, digital and physical.

CK What materials are crucial for that hybridity?

AH Polygons were a material I decided I could not abandon. By polygons, I am talking about the building blocks of every 3D model—literally the faces, edges, and vertices of the sculptural form. To me, this is a material in the same sense as clay because polygons are how I create form. To take a character like Minoriea (2018) out of the virtual—she was living at the bottom of a labyrinthine abyss in my VR experience Minorinth (2017)—and to touch her by rendering her as a digital sculpture was deeply satisfying.

CK So the virtual and tangible merge for you?

AH The tangible object was a magical thing after so many years of creating purely for the computer. While finding my way with 3D printing, I was still working with Michaël Samyn on VR theater works (like Cricoterie [2019]), putting people’s physical bodies into the virtual. I love that symmetry, and it definitely shaped my thinking.

I began making sculpture again in 2017. Fauna (2018) was a big experiment. I based her on a 3D scan of myself. She is printed in a plaster-like material, but hand painted, and I embedded a fossil at the back of her head. On the strength of these pieces and the digital work, bitforms offered me a solo show. In the midst of quarantine, I was making physical work, and then in the middle of the gallery show, blockchain made everyone care about digital. It’s been an interesting moment. 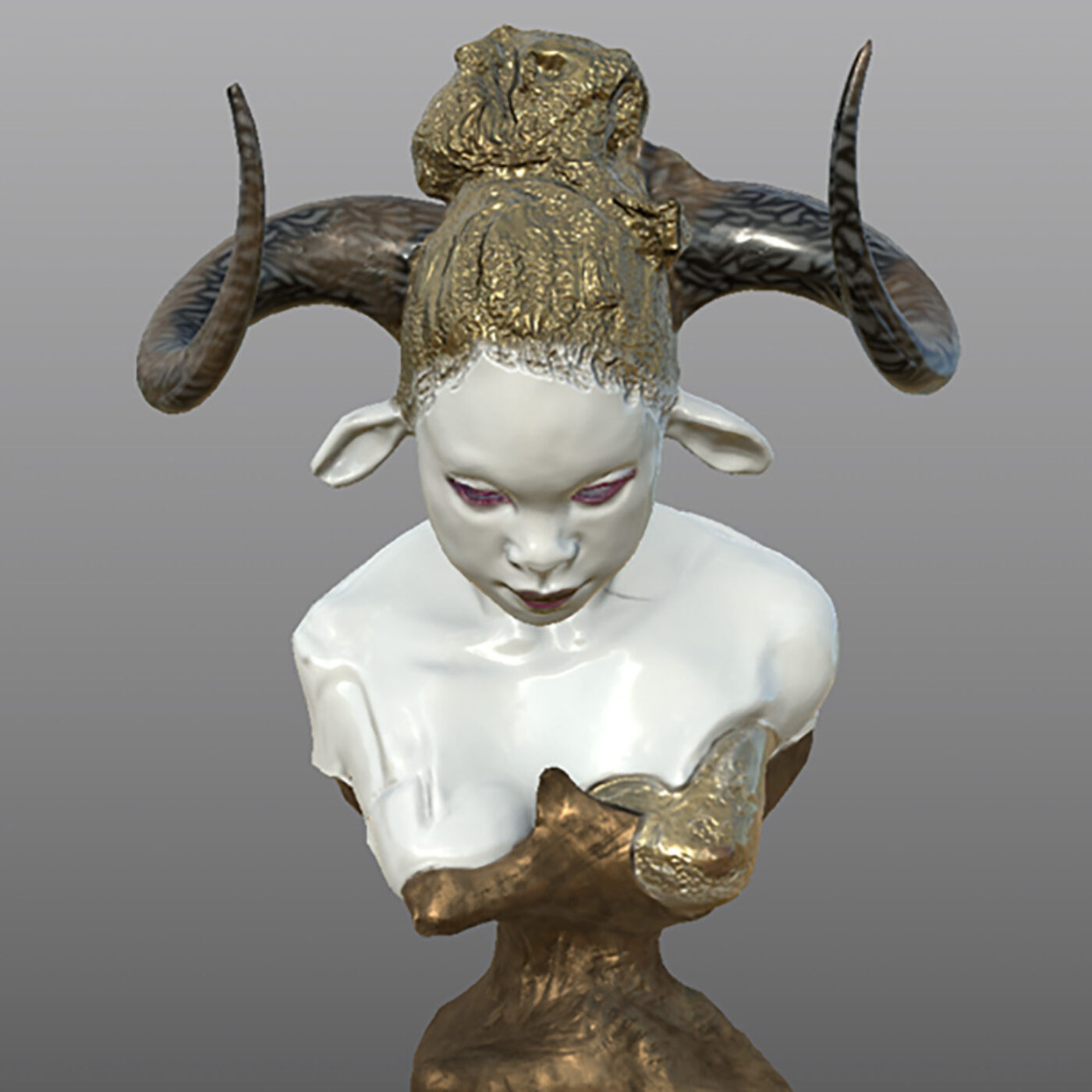 CK You’re in two group shows that engage blockchain technology, Pieces of Me and The Bardo: Unpacking the Real. You launched bit.art with bitforms gallery. You’re involved in the FEN initiative with hicetnunc. What variations in the use of blockchain or the discourse do you notice?

AH For Pieces of Me, I made a website containing a sculpture titled Stygian Hand (2021) which is the ossified hand of a witch holding the one eye shared between her and her sisters. When someone buys the site, that unlocks the release for one hundred people to order a 3D print of the hand (they receive a link to a 3D printing service). That could only happen with web-based art, and people are more open to it now.

Crucially, each show has a thoughtful curatorial voice, taking into account the perspectives of artists with practices far wider than jpegs and videos. The FEN is an artist-led initiative to draw attention to a more ecological solution for blockchain. All are customized approaches, which goes to show that’s possible.

AH Yes, with bit.art we wanted artists to know that it’s possible to build something that suits you. It really is that simple. You don’t need the standardized platforms; they need you. There is no one-size-fits-all for every artist, nor should there be! Though maybe the whales like the convenience of the platforms or the showiness of an auction?

CK What was important to you?

AH For my work, I was glad to control presentation, decide on the blockchain, make a custom collector agreement, etc. I could have extra functionality, like the AR that brings Cyclops (2021) into your room. I minted the pieces on hicetnunc because the ethics of the platform matter to me. On my page at hicetnunc, people can see works like The Mystery (v3 digital v3) (2021) in virtual blood, bone, and bronze, made in reaction to police violence against my people in the USA. I hope experiencing the digital makes people curious about the physical. Perhaps collecting the NFT transitions to physically collecting my work and vice versa. 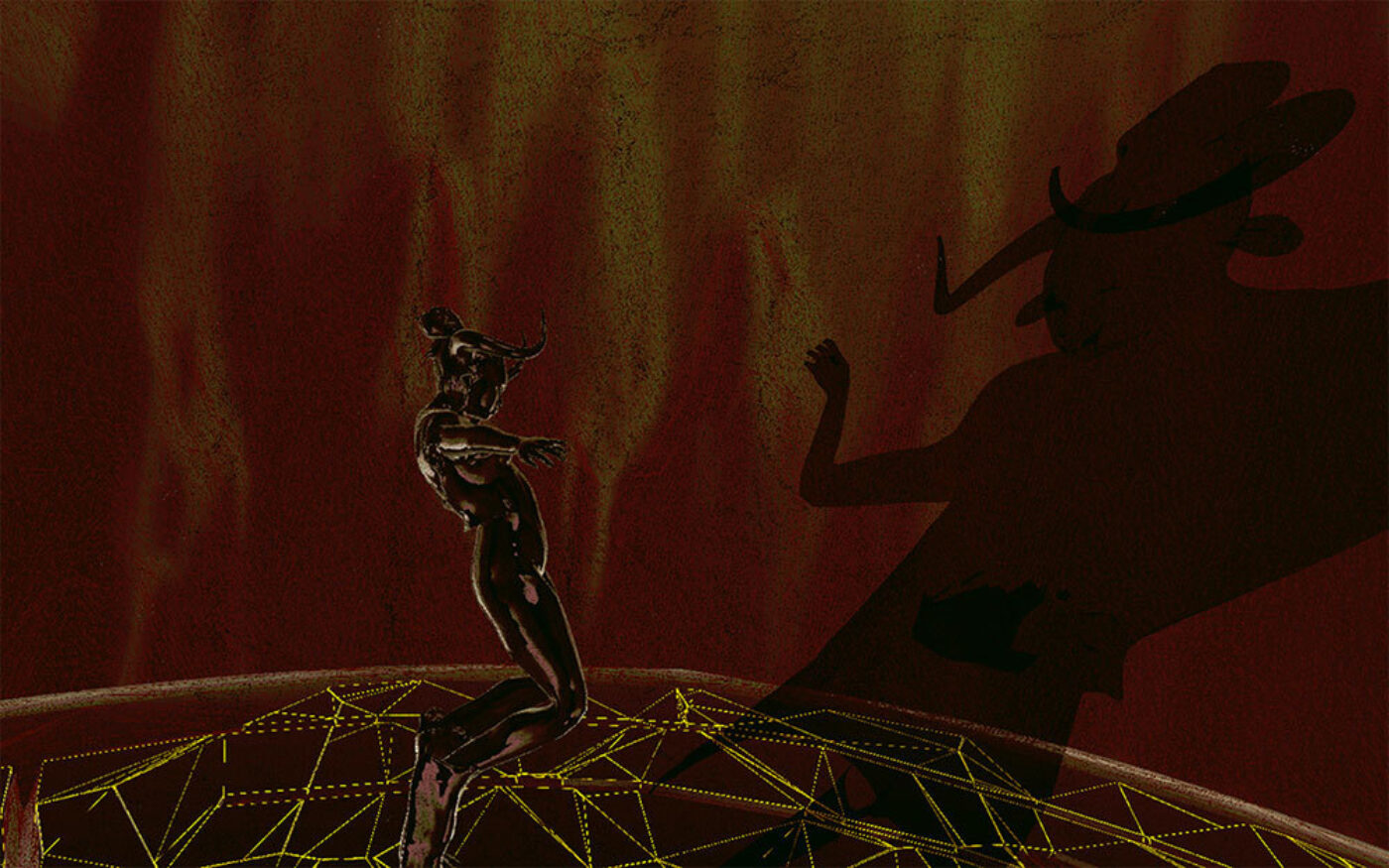 CK Has blockchain shed new light on your practice?

AH It has me thinking deeper about digital materiality. In the computer, I can make my sculpture appear as if made out of any material and defying physical laws. I am revisiting the beauty of that, hoping to make others see it.

It makes me reconsider ever working again for free. For so long our labor has been denigrated. Asking an artist to design something, donate something, without any compensation, is appalling/disrespectful/rude/inconsiderate/apolitical.

I also realized I’ve been standing at the intersection of art and technology for a long time and that staying out of the discourse was a disservice to me and my peers. I didn’t need to become a convert to the church of blockchain to participate. My choices can be influential, so I try to make decisions that resonate with me. This includes working with a more ecologically conscious blockchain (Tezos) and joining a community of artists who are interested in expanding what all of this can mean to us.

CK What are some of the problems you are trying to address?

AH Artists rights and compensation have been longstanding issues. Many artists want to normalize the idea of asking for a twenty-percent royalty on the secondary market.

CK Sure, that’s been around since before Seth Siegelaub proposed the Artist’s Rights Contract.

AH We can go further. The curators of Pieces of Me have artists receive fifty-percent resale royalty (more than the ten percent most platforms like to emphasize); and all artists in the show split a portion of any sale because a group exhibition is an opportunity to show solidarity in the face of big capital. Feral File has artists in each group exhibition give each other one of the limited editions to create a community of artist-collectors that gain from each other’s success. Encouraging respect for the work of digital artists (and all artists) through financial recognition will help the whole industry.

Scarcity has been the model of respect and authority. For digital art exclusivity came either by packaging (selling a computer with the work) or by some type of financial arrangement (in games, selling many copies at a very low price with success gauged by how many copies sold). Blockchain is disrupting those two models and allowing a space for us to think of alternate frameworks. And alternatives are sorely needed.

CK Has blockchain changed what you want to do?

AH I had almost given up thinking anyone would see my physical and digital sculptures on equal footing. But right now, the digital ones are more important, and after twenty years seeing digital art sidelined, I find that exciting and very welcome!

Now that people are looking and listening, I want to do something with that attention. I will be more ambitious now and definitely expand my use of programming. It’s been important to me to use web technologies, keep things simple. But I have not at all reached the limits of what I can do with 3D and the web. I look forward to creating new experiences. 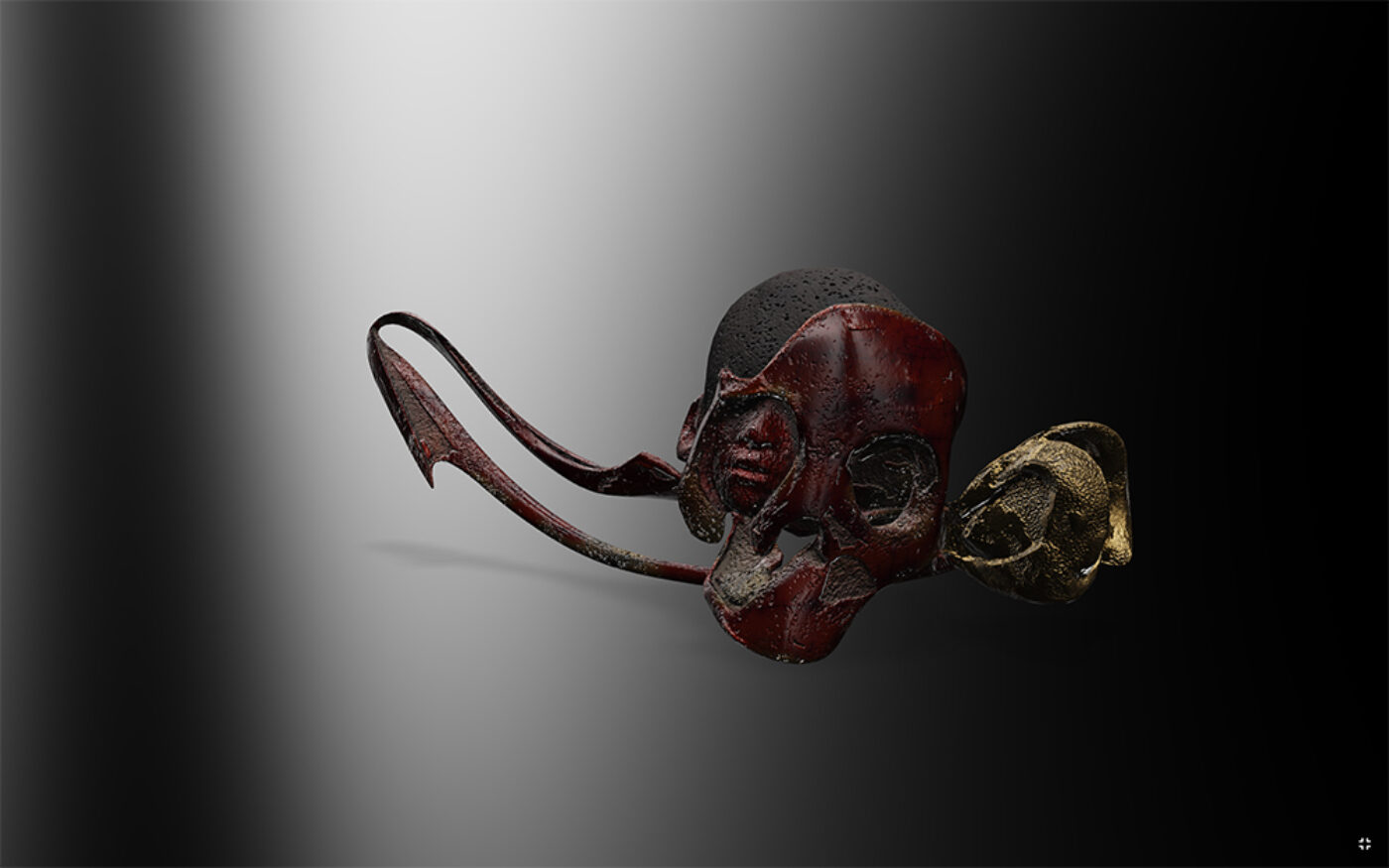 CK As an artist who has witnessed several moments of digital thrall, what possibilities do you see in blockchain, and what makes you wary?

AH I no longer try to see the future. I concentrate on what IS. There is nothing for me to believe in but my own skills. But it does feel familiar, so I know this is not ideal and cannot last. Eventually, there will be some expectations placed on the artist, standards will solidify, the pandemic will end.

CK You’ve been immersed in some of the darker hybrid figures of mythology. Do any tales or creatures seem apt for blockchain right now?

AH To be “between Scylla and Charybdis” means to be presented with two opposite dangers, the task being to find a route that avoids both. So maybe that? But I’m an optimist.

Auriea Harvey’s work can be seen in the online group exhibitions The Bardo: Unpacking the Real until June 27 and Pieces of Me until July 31.

Charlotte Kent is an assistant professor of visual culture and an arts writer. 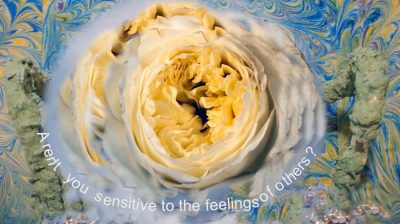 Video and sculpture that combine the digital and organic.