On suffering, beauty, and utility. 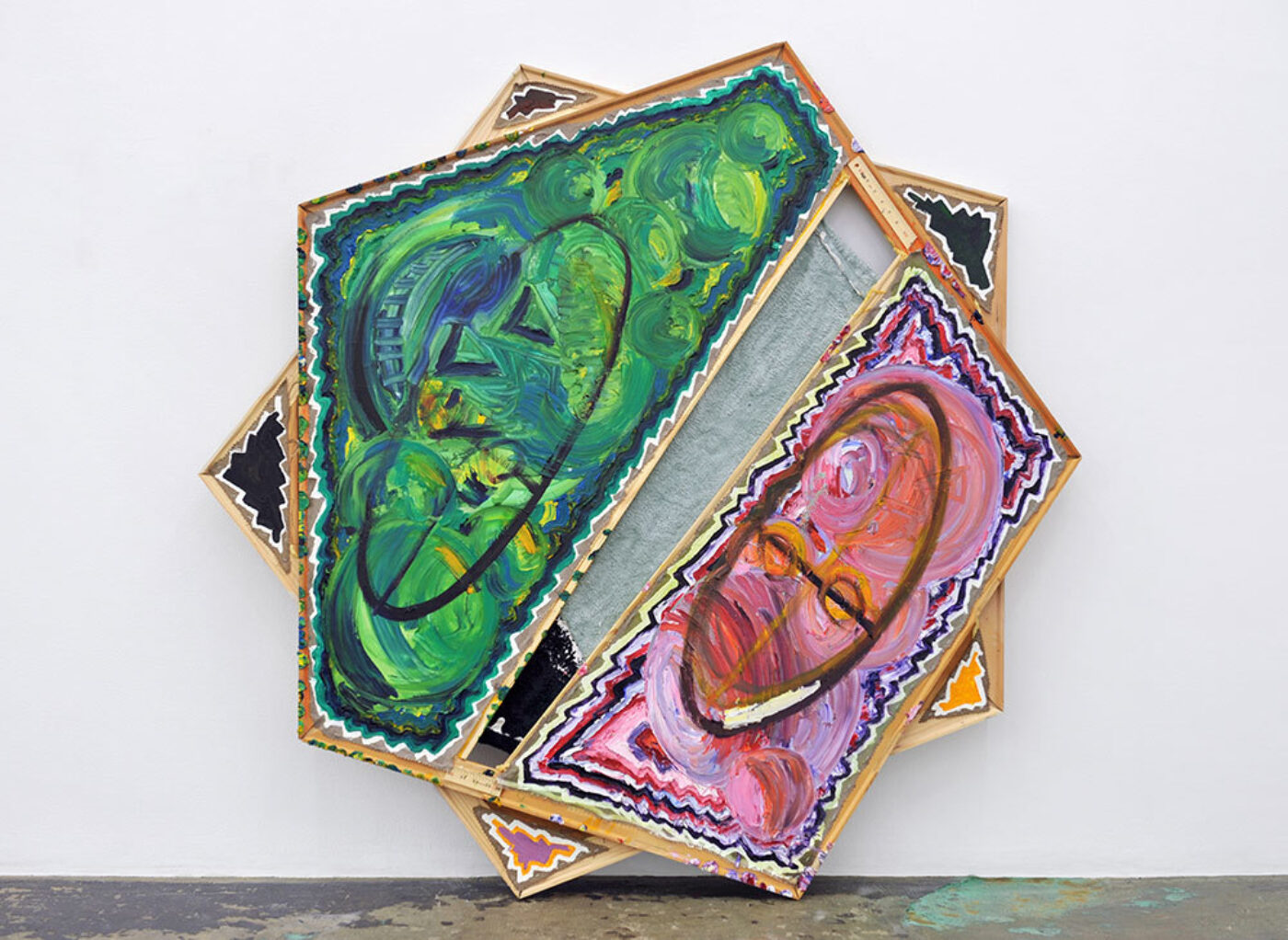 At a time when honest and empathetic communication, and the ability to understand the experiences of those around us (and beyond), feels absolutely critical to the survival of humanity, abstract painting may not seem like an obvious place to look for encouragement. Yet Mike Cloud’s new paintings in his current exhibition Tears in abstraction at Thomas Erben Gallery take on the work of connecting to the suffering of others across differences in time, place, and identity. Connecting with another, with an other, is often coded, messy, inexact, and subject to misunderstanding to the point of failure … not unlike painting. Formally, Cloud’s paintings are strange and funny, with looped belts hanging off trapezoidal canvases and strips of Whole Foods bags pasted to exposed stretchers, with lovely palettes and gestures frozen in thick oil paint. In looking at them one is reminded of the many difficulties in trying to communicate clearly, and the rewards of trying anyway.

Sheryl Oppenheim In your current exhibition, the wall as a space for death seems important, coupled with the title of the two series on display, Hanging Paintings and Beheading Paintings. Can you talk about how your interest in death and painting has grown or changed as you worked on these paintings?

Mike Cloud In the past three or four years I’ve been thinking about death as a meeting place and as a gateway to a broader subject matter in painting. In these new works I’m trying to use death as a gateway to widen my understanding of identity. People are so different that there could never be anything like a “human nature” to bind us together, but there’s an identical “human condition” or set of conditions that we all labor beneath: we’re born into a world already occupied by other people; we are identified and put to work by the people who already occupy the world; we all engage in large and small acts of unexpected freedom and creativity; and we all get sick, tired, and die.

To me, painting tends to resemble death in its transcendent, portal-like qualities, but it also resembles some of the conditions of my life. Painting is particularly expressive of my experience of freedom, specifically, my boundless capacity to behave unpredictably within an apparently narrow set of options and to create new things out of old choices, which is a form of forgiveness. In a lot of ways painting is a very narrow field for me even though I can never predict the sensual effects of every combination of support, surface, composition, and subject. The variety is not like the variety of rolling a die. In painting the outcome has to be meaningful, urgent, expressive, and humane as well as unlooked for.

At forty-five years old I look at painting, eating animal products, and having lots of children on a constantly warming planet as things that can only be justified by reference to freedom, emotion, and an appeal to instinct. The hope is that their instincts and creativity will lead our children out of the trouble they led our ancestors into. 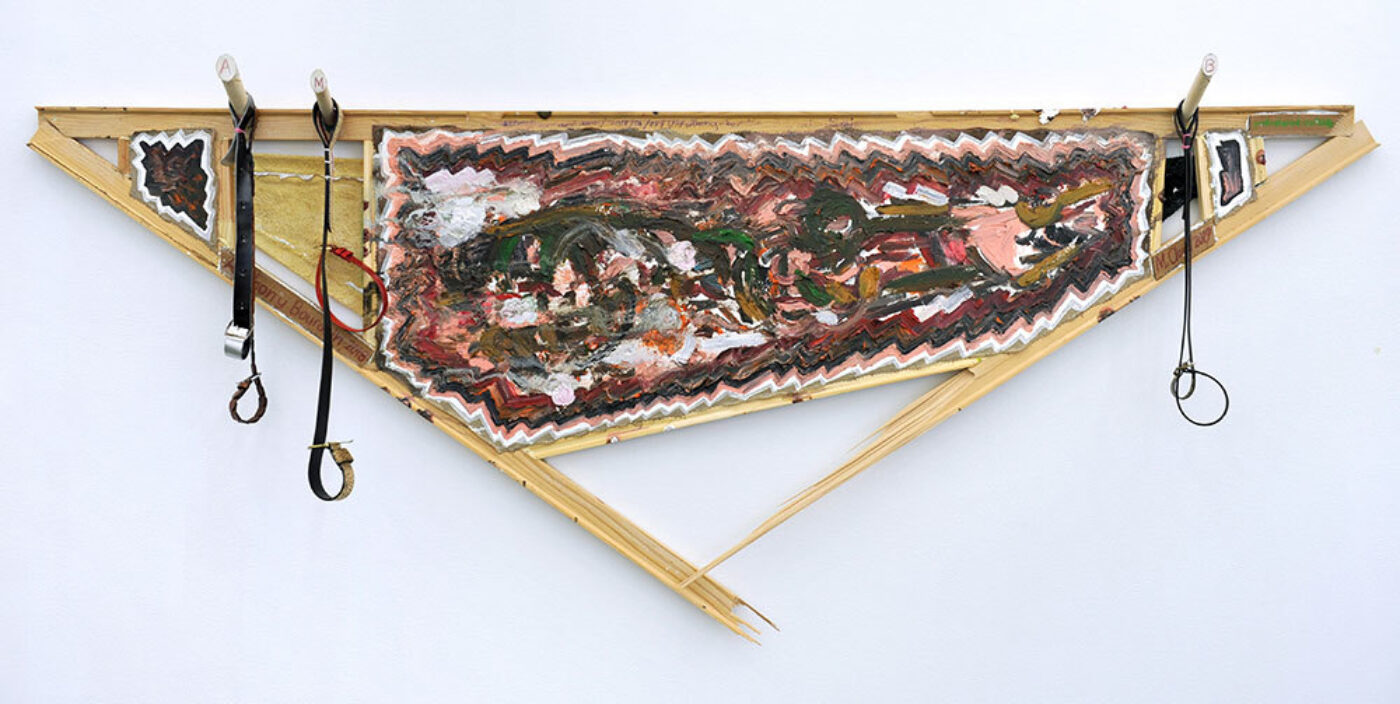 SO Each beheading painting corresponds to a death that you found on the internet. How did you select the deaths, or perhaps the dead, that you chose for the paintings?

MC Wikipedia provides many running lists of subjects who died in extraordinary ways. I only edit the lists in the interest of creating diversity in gender and nationality. I also choose people who have died recently. I know that people who have died recently lived postmodern lives. Whether they were jihadis, Bollywood stars, or Trumpsters, I know that they were concerned about global warming, they had seen one of the Avengers movies, and they had been vaccinated for measles just like me. I tried to create diversity in gender and nationality because I assumed that there would be a “digital divide” bias toward white, male victims that I did not want to reinscribe.

I chose beheading and hanging as subjects for painting because they are situations where the form of the painting and the body of a human being might correspond. Portraits often isolate and distort the head and neck of the painted subject in the way decapitation isolates and distorts. Hanging is, of course, the natural state of a modern painting.

Hanging and fragmenting are both formal situations that are commonplace in pictures but extraordinary and destructive in life. Our bodies are essentially sculptural and not pictorial. I need to propose some sort of correspondence between my work and the subject; but I don’t look at photographs, and I never think about what they looked like. I’m not interested in depicting their large noses or ruddy complexions—nothing sensual in that way. The correspondence is purely situational in my work, but a purely situational sensuality does exist in painting. The elements of color and gesture are left then to me as my own expression. 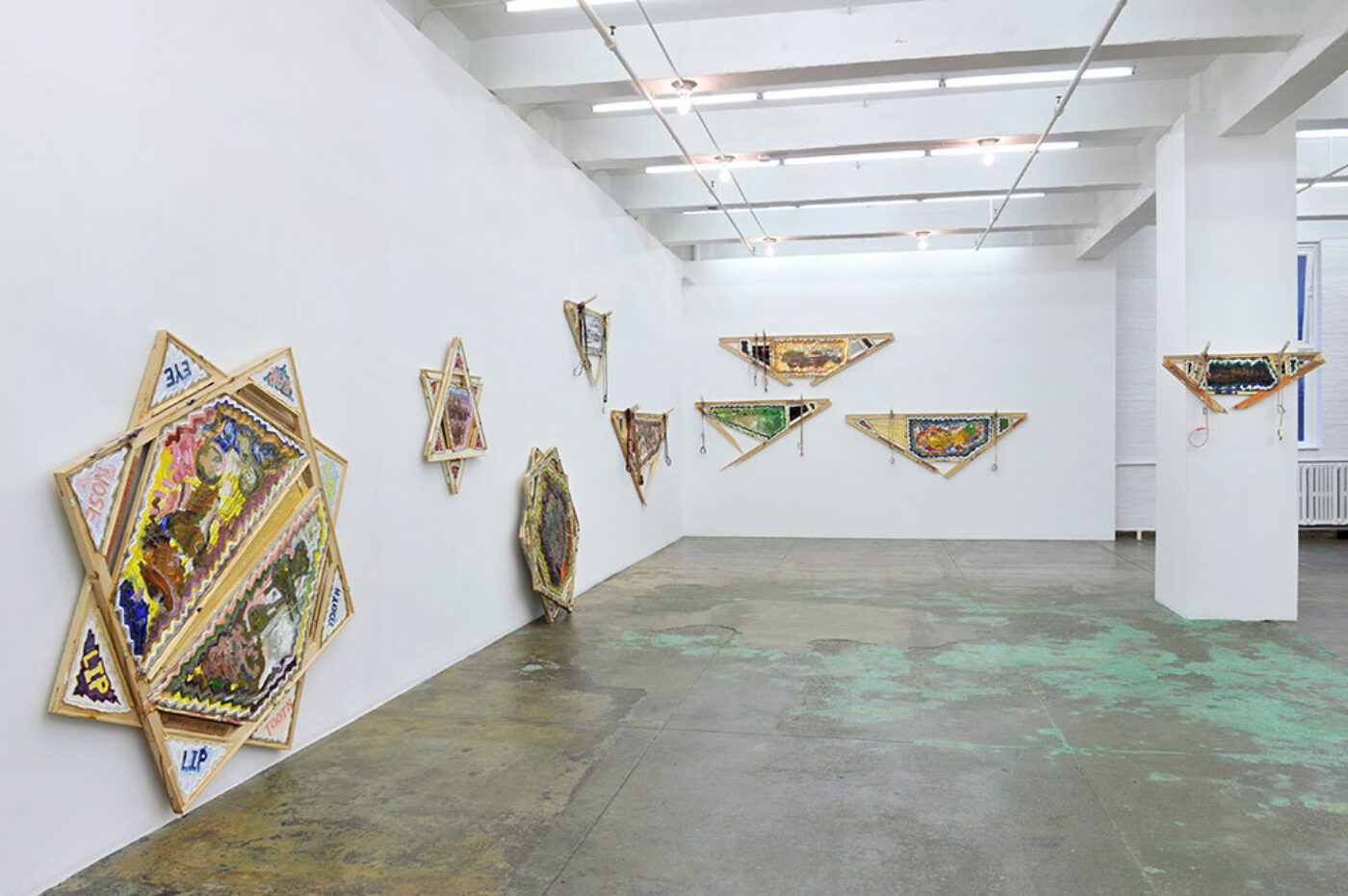 SO How can painting critique our conversations around suffering, and how identity informs it?

Every person who dies is one less person who might cure my cancer and also one less person who might murder me. In my lifetime, the number of people who have committed murder far surpasses the number who have cured cancer, and so, statistically speaking, the death of every person I do not have a sensual use for has a tiny bit of utility for me. When an asylum seeker and his daughter are drowned crossing the border, when a suspicious-looking boy is shot by the neighborhood watch, when a man and his daughter are killed in a drone strike in some café in North Yemen, my job prospects, my family’s prosperity, my navy discharge date all incrementally improve, and I feel a tiny amount of secret joy. That joy is a secret that painting can tell for better or worse.

The currency of painting is beauty. Good painting about suffering is beautiful. A painting about a suffering subject can be beautiful because of its pallette, or its composition, but it can also be beautiful because of the utility the sufferer’s suffering has for the viewer. The suffering of a slave, a criminal, a woman, an artist has a social utility that painting converts into beauty. Something like this is what I read in Betye Saar and Howardena Pindell’s writing on art in the 1990s and the recent essay “Black Bodies, White Cubes: The Problem With Contemporary Art’s Appropriation of Race” by Taylor Renee Aldridge.

Painting reveals the utility and the pleasure we derive from other people’s suffering and death, and that is something that needs to be brought into our conversation. The currency of painting is beauty; if there was no beauty in suffering, it could not be painted. 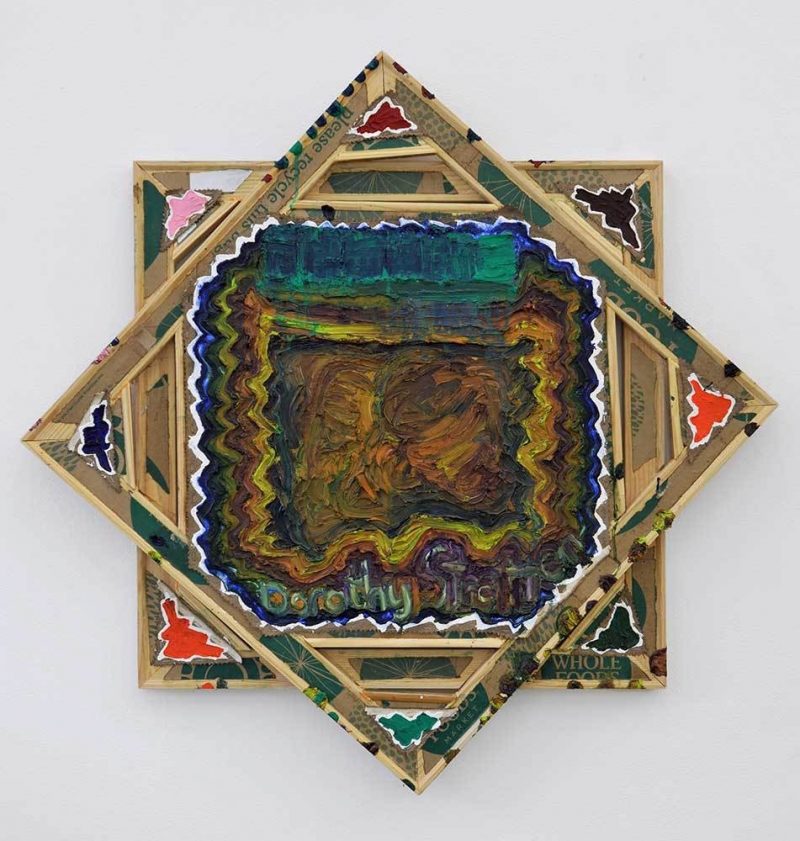 SO Can you speak a bit more about the idea of the “unlooked for” and why this surprise, this strangeness, is so important to painting?

MC I find it very difficult to be fluent and resistant to premature closure at the same time. To be fluent in something, like Latin, hockey, or geometric abstraction, I need a clear set of limits that I can practice and improve within. To resist premature closure, I need to resist obvious, immediately recognizable limits and search for limits that might exist further out or not at all. Resistance to closure is simply openness. By roaming restlessly across the surface of painting in search of its most distant borders, I can create things that are novel and surprising, but I also neglect the deep, narrow digging that results in fluency, facility, and mastery. For me it is worth sacrificing a reliably deepening signature practice for the possibility of change.

When I learned to paint fifteen or twenty years ago, the dominant ideology was late modernism. In that ideology, painting was a territory where each painter staked a small aesthetic claim. There was room for all the painters because we dug downward in search of formal riches rather than moving outward into one another’s territories. So one painter was a stain painter, another a line painter, another a blur painter, another a drip painter. Through downward movement I could approach mastery, at least within my limited oeuvre; and because downward is a linear direction, it was possible for work to progress in a historically and critically legible way. Work could “develop” rather than simply change because “deeper” was a legible trajectory. But the actual trajectory that was happening in my studio was not reflected in that ideology, and I tried to visibly break with it. I wasn’t satisfied with what I was finding in my downward investigations and started moving roughshod in and out of other aesthetic territories.

I am also suspicious of the politics involved in staking a claim within the territory of late modernist style. Gerhard Richter is well known for his revolutionary, photo-based, and abstract smear paintings; but a decade earlier, Jack Whitten, a less well-supported African American painter, was exhibiting smear paintings to universal disinterest. Richter became late modernism’s official smear painter and benefited from the capital and notoriety he mined from that gestural location. Smear paintings today are seen as homages to Richter not Whitten. I have serious doubts that a marginalized painter, working within the territory of pure gesture, pure abstraction, could stake a formal claim that would hold up in the court of art discourse. Style, consistency, development, mastery are worth sacrificing when it helps transcend unworthy ideologies.

Mike Cloud: Tears in abstraction is on view at Thomas Erben Gallery in New York City until November 9.

Sheryl Oppenheim is a painter and paper marbler, as well as BOMB’s Development Associate.