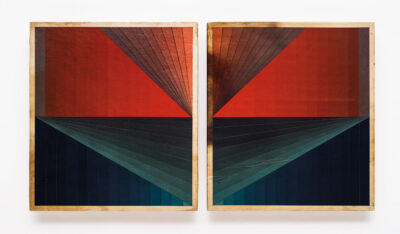 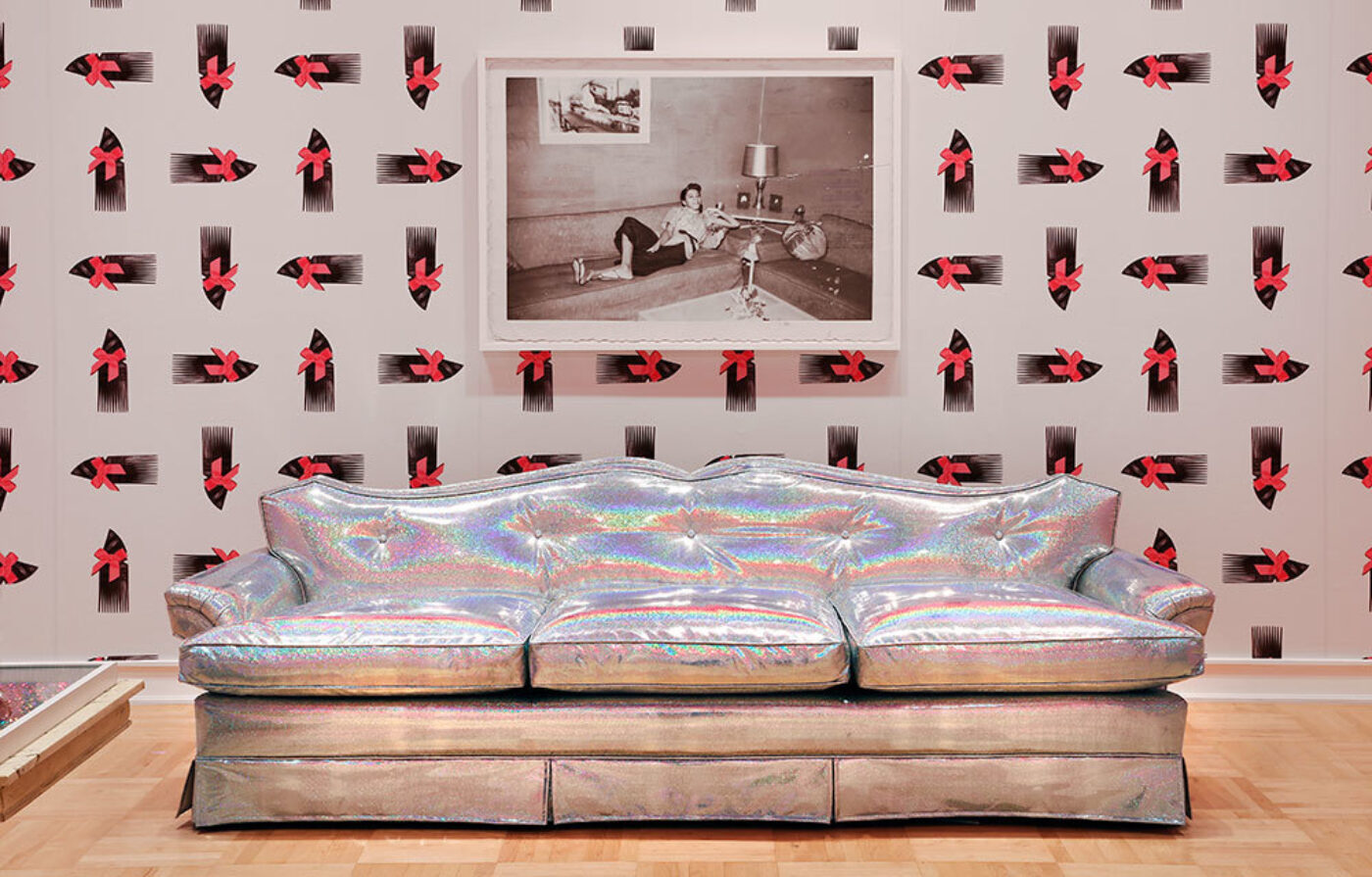 Sadie Barnette’s installation Room to Live, on view at the Henry Art Gallery in Seattle as part of In Plain Sight, investigates the politics concerning who is allowed to see and know under the ever-present gaze of government control. Barnette’s ongoing negotiation of this question occurs in her appropriation of materials from a five hundred-page FBI dossier kept on her father, Rodney Barnette, through COINTELPRO, the FBI’s surveillance program originally designed in the 1950s to disrupt political organizations. At once dazzling and immersive, Room to Live is a reminder of both the celebratory and oppressive edges of attention.

Emily Zimmerman Could you walk me through the installation Room to Live and the histories it invokes?

Sadie Barnette What you’re experiencing is a type of living room space anchored by a photograph above the couch of my Aunt Vivian, or Auntie Viv. She is lounging, and it’s a very at-home pose. She sewed the covers for the cushions and some of the other decorative elements in the photograph. So, she’s showing off her creative place-making of this living room. Meanwhile, the whole space is existing within, and fighting against, the presence of state surveillance.

It’s a living room that resists state surveillance, but also can’t fully escape its gaze. My interest in surveillance is informed by a five hundred-page, very intense surveillance file that the FBI amassed on my father during his time working with the Black Panthers in Compton, California, and his trying to exonerate Angela Davis. I experienced a very personal connection to what can maybe feel abstract or historical. There’s the photograph of my Auntie Viv, and there’s a holographic couch bringing her world to life, or her imagined liberated world that probably only exists at this point in our minds but is sometimes made palpable in living room spaces with family.

There’s an important current of watching and being watched. There is a glittering metal-flaked television as well as glitter surveillance cameras that are hidden throughout the space. The surveillance cameras are obviously coming from this authoritarian state-sanctioned FBI surveillance of black life, but at the same time the surveillance cameras have been glitter-ized and subverted. I want to suggest a counter-surveillance or a surveilling of the surveillance. Even perhaps an antidote or some magic spell that could be cast, like a protective, unsurveillable zone in this living room. In regard to the TV, I was thinking about not only being watched but also what we watch and consume and how we see ourselves—thinking about that projected view of the media as another way of looking, seeing, and being seen. With the holographic redactions (in the diptych Untitled “Agitator Index” [2018]) and with the glitter cameras, I was also thinking of a restorative technology.

There are wallpaper elements as well, one derived from my imagination, and one taken directly from the stamps and signatures found in the FBI document. And there are family photos as well as collage. 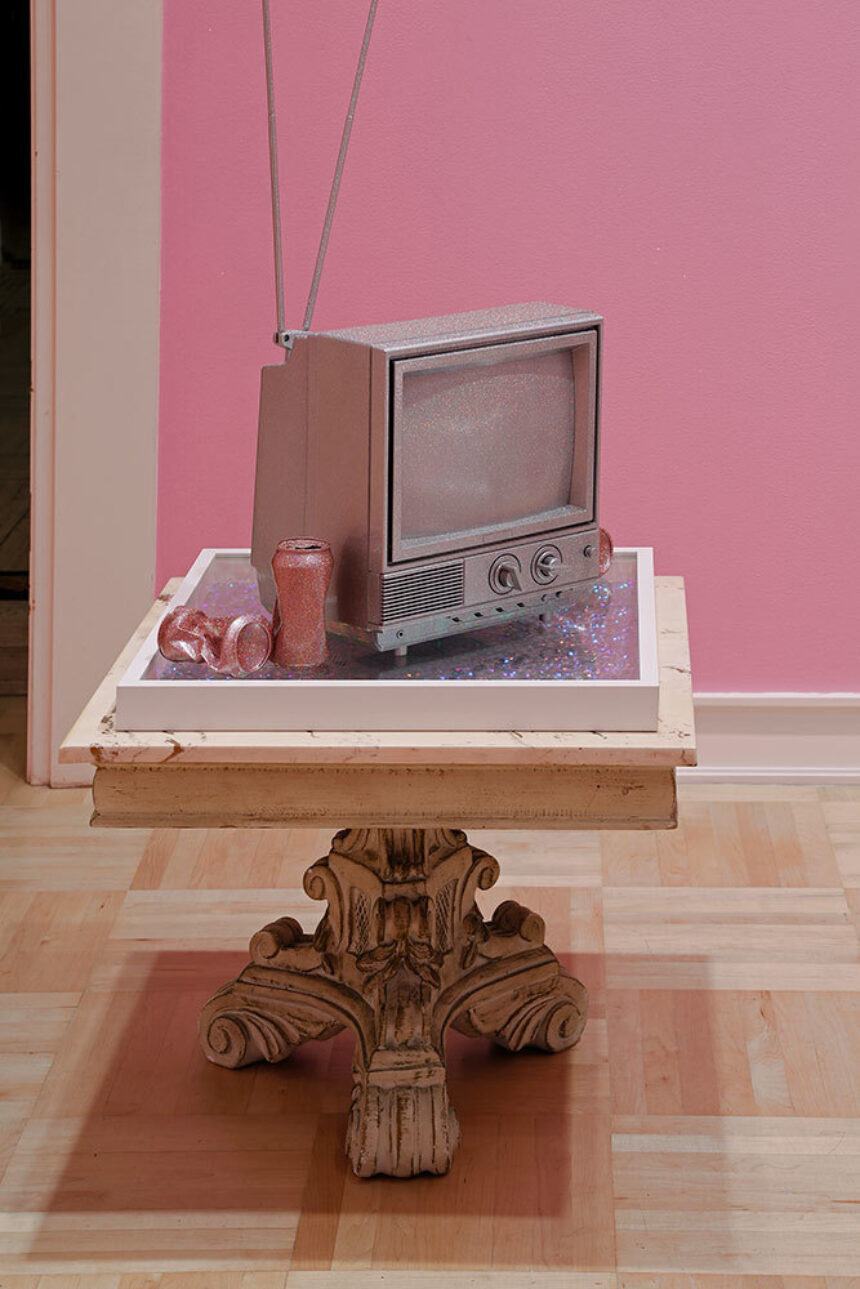 EZ Can you talk about the diptych and the specific documents in it?

SB The left panel lists informants recruited or coerced into infiltrating the Black Panther Party. It is intended to hold a space for thinking about what that really complicated relationship must have been like. Here’s a state apparatus that undoubtedly has dug up charges that they can use against these folks, and is now pitting them against their own community. I think my pink spray-paint gestures are a necessarily failing attempt to create some type of restorative justice, peace-making, or thinking through that complicated relationship to the actual informants. It’s a complicated mix of anger and also compassion.

The righthand panel lists activists targeted for inclusion on the FBI’s Agitator Index, a list of US citizens who were considered “dangerous” and could be detained without due process in an unconstitutional move by J. Edgar Hoover. The names were already redacted in the documents I received, but here I’m adding the holographic material to the redactions themselves and again thinking of this as a kind of restorative technology and healing for those names and stories. Activists are still locked up in prison for their involvement with the Panthers, even as we celebrated the fiftieth anniversary of the Panthers and have come to have a much more complex understanding of the politics. But we still haven’t reconciled with the political prisoners who are locked up, families who were ripped apart, loved ones who were lost. There’s really been no reckoning of that. I specifically chose two pages that didn’t list my father’s name, because I wanted in this particular instance for anybody to be able to project their family onto this history.

EZ You’ve talked about your artistic process in the past as curatorial, and you said in an interview with Vogue: “So much of my work is more about a way of seeing things rather than a way of making things.” Could you talk about your process and its relationship to an embedded politics of attention?

SB My process is a modular system of seeing, framing, positioning, and playing just beyond language. I find that I need room for abstraction and imaginary spaces, for the making of other worlds. I think a lot of times the joy and the sparkle in my work is very evident, and to me that joy is always in acknowledgement of and response to the pain. What I see as a real liberation, or perhaps I should say an ongoing process of becoming liberated, is so far from where we are and the way we talk about where we are. I’m not dreaming of a new president or a new director of the FBI; I’m dreaming of something so fundamentally different that it is still a dream. 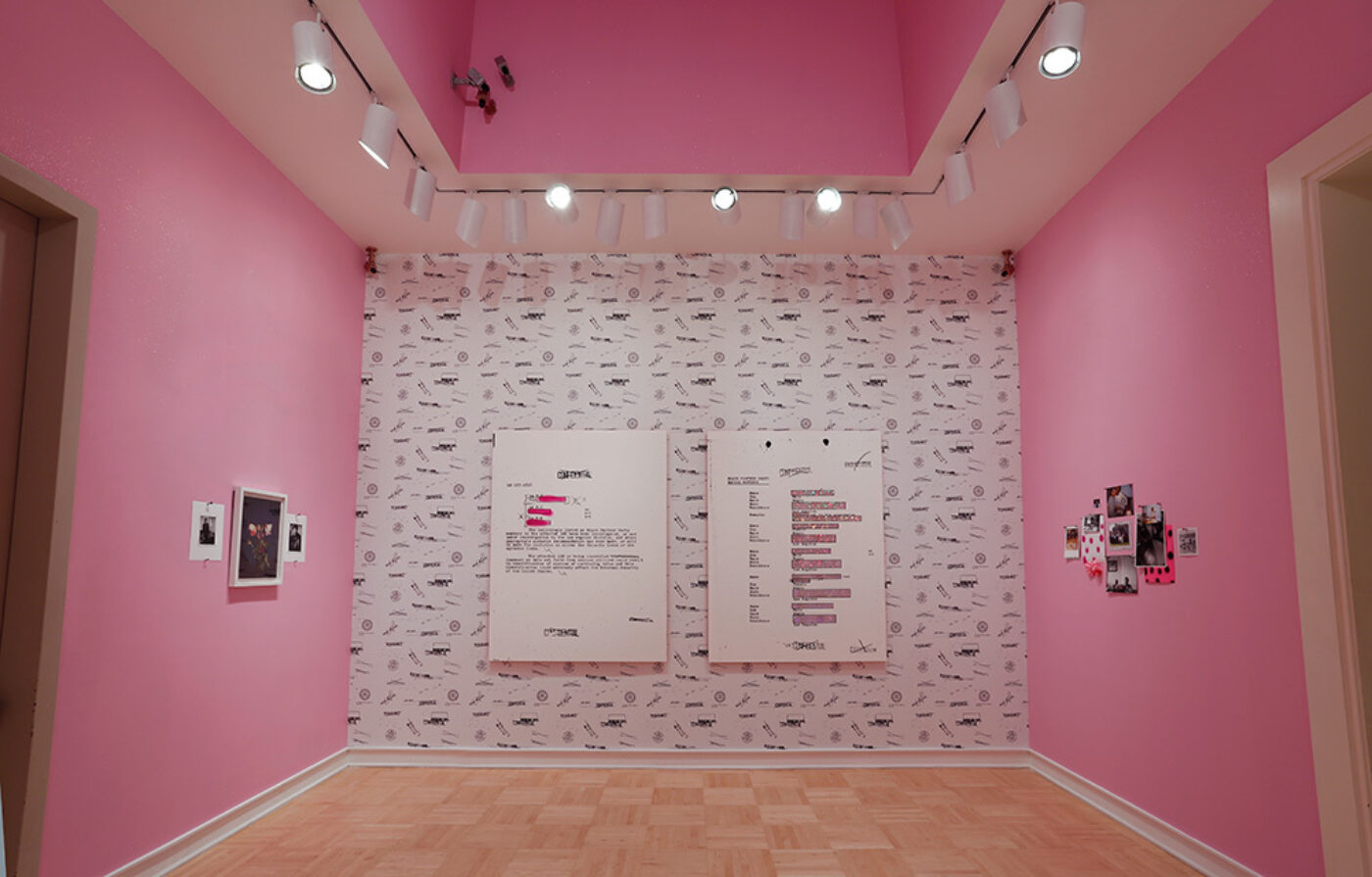 EZ There is an interesting dynamic between past and future in your work.

SB I think there’s a collapsing of time in a way that I hope brings an aliveness to the past or to archival materials or stories. I hope that there isn’t this chasm of reverence and distance but that the past—whether it’s my father’s story or this country’s story—is danced with in a sense that can bring a human, personal element into the present moment.

The idea of the “Black Panthers” can become a really iconic, flattened, reduced character or archetype, and it becomes fixed in our historic imagination that there was one way to be this one thing and this one type of person who participated in this very particular way. In reality it was much more fluid. People had differing ideas and were unique individuals. People were coming in and out of the Panthers. People might have been supporting the Panthers but didn’t identify themselves as a member. I think that the reality of people and lives and families in these situations is much blurrier than our archetypes. I hope to unravel a bit of that.

EZReorienting the hierarchy of authoritative and lived historical narratives seems like a really important effect of your work.

SBYes, the way that I think about it is to try to orient some of the political back to this living room, family space, and think about these political actions that my Dad was engaged in as an extension of caring for our family.

I also think about my Auntie Birdie who is included in the FBI file because she was making her home garage available for Panther meetings. There were so many ways that people participated besides putting on the leather jacket and beret and marching in front of City Hall. People opening up their living rooms, cooking, and taking care of each other.

I think of the living room as a space where so much of politics is actually happening and where people are taking care of each other while the world doesn’t change or while it changes very slowly. Those living room spaces are also the spaces of celebrating, having dance parties, and not waiting for freedom and liberation and the revolution in order to live and embody and engage. 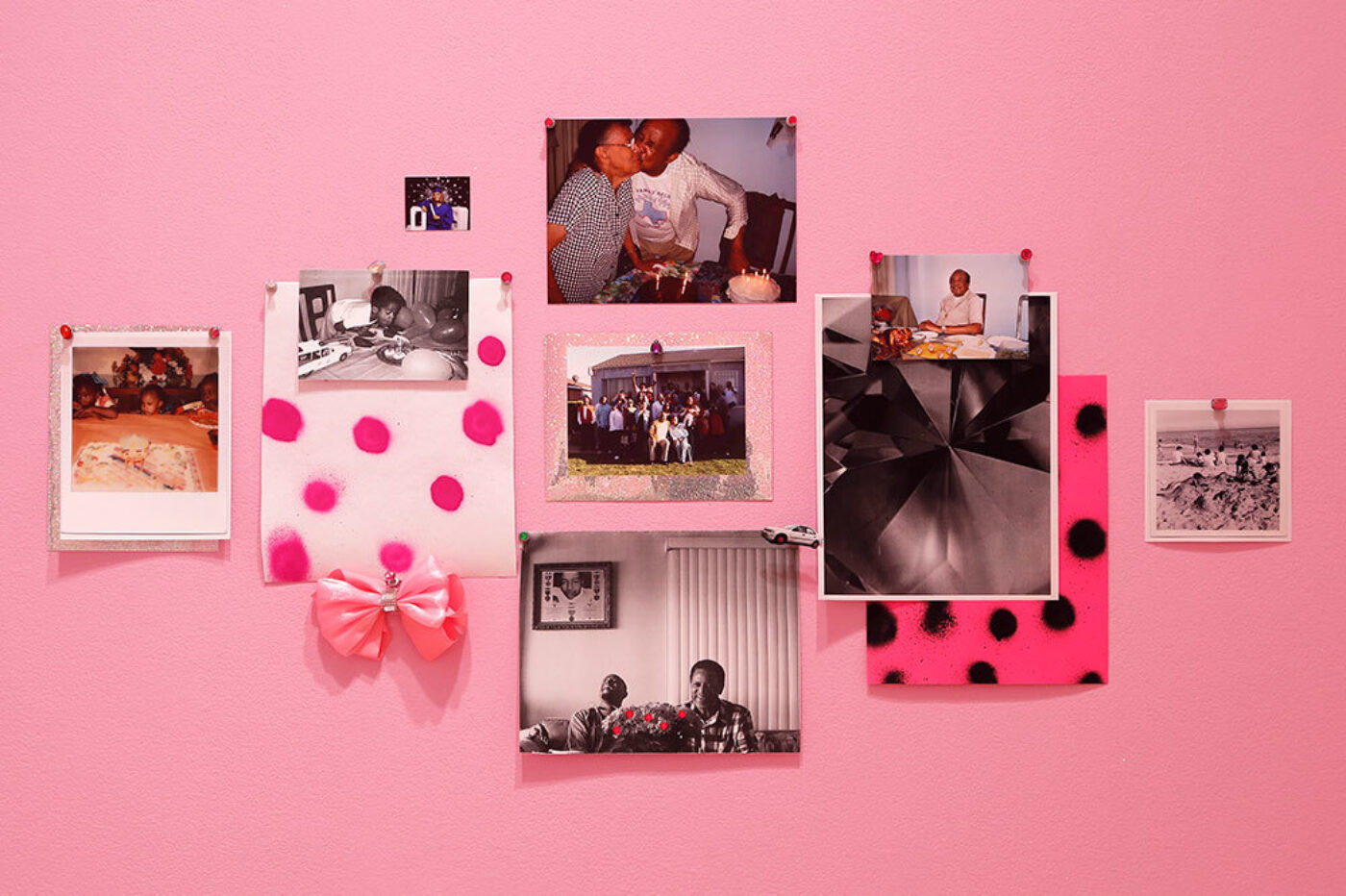 EZ In the exhibition there is a doubling effect between the real couch and the couch in the photograph. Is there a foreground and background dynamic in your work?

SB I think it has something to do with suggesting another plane is always available. No one picture plane can exactly capture any of these states. I think a big part of my work is creating rules and dynamics: something is small only if something else is big; something is only glittery and over-the-top ostentatious if something else is minimal and restrained and reserved. Having these multiple planes on top of each other allows each one to undo the other one or to acknowledge that it’s just a proposal. No one material fully takes itself to be the final word.

Emily Zimmerman is Director and Curator of the Jacob Lawrence Gallery at the University of Washington, and the founding editor of MONDAY.