The Origins of Art: Kristen Sanders Interviewed by Owen Duffy 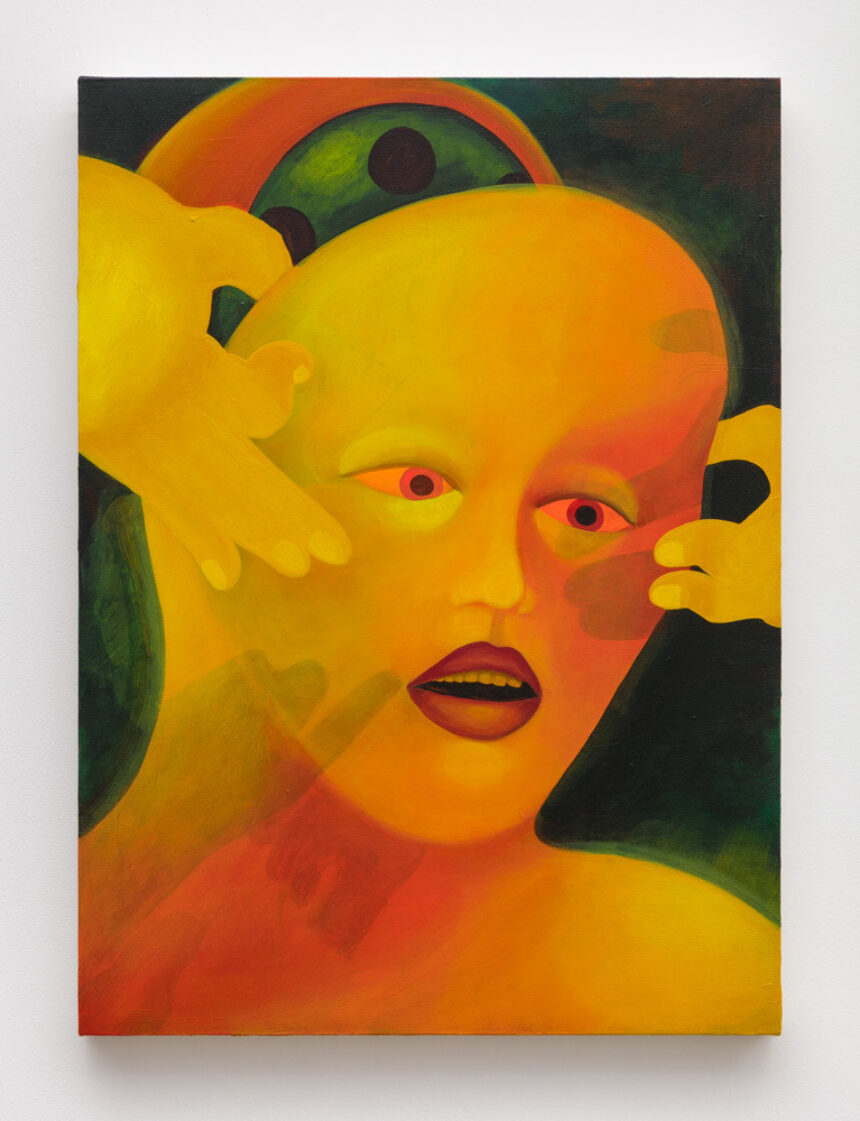 How did we become human? Kristen Sanders’s fluorescent paintings—with their vibrant worlds of green, tangerine, and scarlet—meditate on this very question. Sanders imagines speculative moments in time when prehistoric hominids might have acquired self-awareness: drawing a line in the sand, using a simple tool. Her paintings ask another equally pressing question: When did we become more than human? Sanders also paints uncanny images of cybernetic organisms with their mask-like faces peeled off or about to be donned. On the occasion of Sanders’s first solo exhibition in New York, Early Bodies, at Brennan & Griffin, we discussed the human figure, the anatomy of RealDolls, and the birth of the first image.

Owen Duffy For almost five years now, if not longer, a lot of your work has been concerned with human figures, whether prehistoric hominids drawing lines in the sand or cybernetic organisms. How are these different subjects connected?

Kristen Sanders Whether it’s a pre-human figure or a post-human figure, it’s always circling around the human. And for me, these different figures are mirrors of each other. I began with just hominids, extinct human ancestors, as I was interested in exploring where the threshold exists between ancestor and human. By speculating about the earliest stone tools, the first marks (the line in the sand), and other images of the self (figure stones and hand negatives), I considered at which point the prehistoric hominid might have gained a self-awareness that could designate its crossing the threshold into becoming human. Maybe that threshold exists at multiple points. I then began to consider artificial intelligence in a similar manner, and I became interested in also exploring the threshold beyond the human. A body is constructed, and at which point does a self become aware? 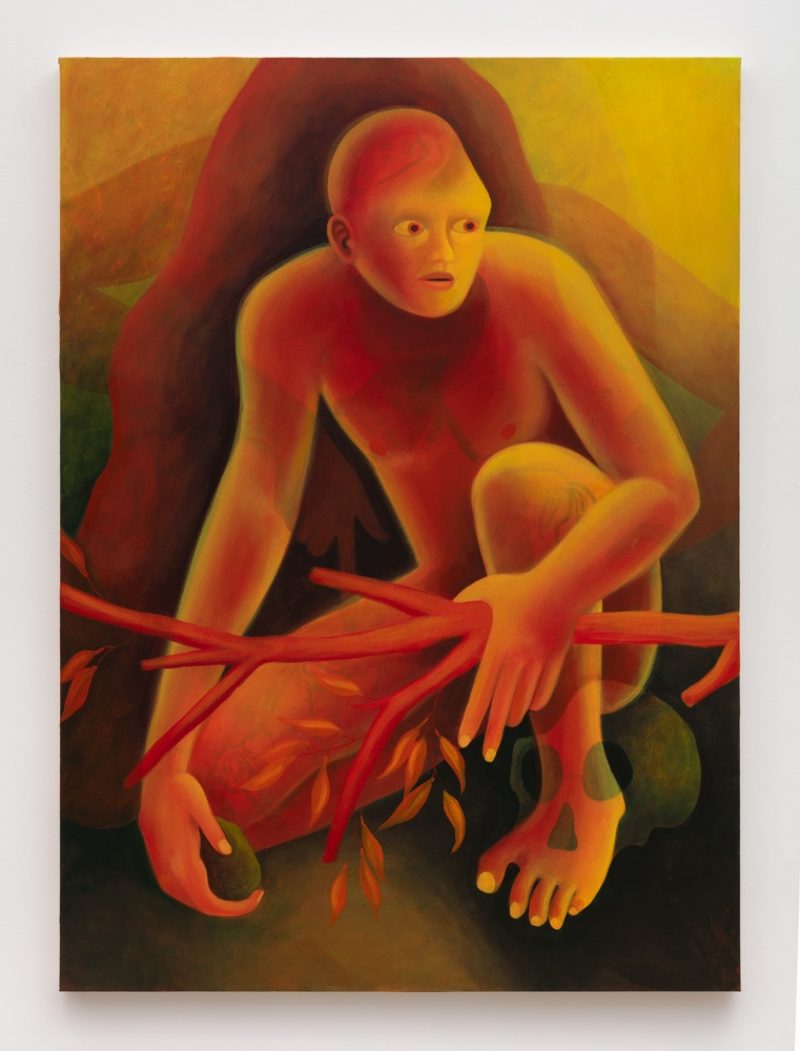 OD While addressing the question of the human, and when that being begins and ends, your prehistoric/hominid subjects also examine the role of gender in the history of art. Can you elaborate on how your paintings reframe art’s origin stories?

KS I had been thinking about this with regard to the origins of image making in prehistory. I began by asking what happened before cave paintings and engravings. What was the first image? I developed a narrative in which Homo habilis discovered the first mark by drawing a line in the dirt with a finger, and that this happened about 1.6 million years ago. This moment also felt like a potential transition point between ancestor and human. I then began reading more about a history of bias in anthropological research. One thing that stuck out was a particular anthropologist’s assertion that female hominids were incapable of discovering or inventing anything useful, and that it was the male hominids who led the species across that threshold into becoming human. So, I wanted instead to reframe the image of the passive hominid woman as an important figure in our evolutionary history. I painted hominid women into different narratives of discovery: they picked up the first pebbles and invented stone tools; they drew the lines in the dirt and discovered the first image. In doing so, they regained their potential humanness. Now, however, the specificity of “female” is becoming less important in the work.

OD I love how this perspective positions image-making and what it means to be human as intimately bound. If the first image was deeply connected to the first “human,” where do you think the relationship is between humans and images as we exit the beginning of the twenty-first century, and what do your paintings say about this juncture?

KS There are many different ways that we relate to and use images today, and my work doesn’t attempt to address all of them. I have carved out one small facet within this incredibly broad scope. For me, maybe that relationship is not so different now than it was when that first line was made in the dirt. I like to think of the line in the dirt, and other prehistoric images, as markers of a human self—the conscious self reflects outward through an image and can therefore recognize itself as human. They are mirrors or self-portraits. In thinking about my own relationship to the images that I paint, I think they act in a similar way—they are my mirrors. And with the post-human figures, the body has also become image, and I have been thinking a lot about body versus behavior in determining what’s human. If in human evolution the distinction is made between anatomically modern and behaviorally modern humans, then how can this apply to artificial intelligence? Does AI need an anthropomorphized body to be human? Perhaps, yes, because the image of the body feels crucial to our self-recognition. HAL 9000 from 2001: A Space Odyssey (1968) could be described as behaviorally human, for example, but lacked a recognizable body. In my paintings, the idea of a simulated body is just as important as that of the simulated self. 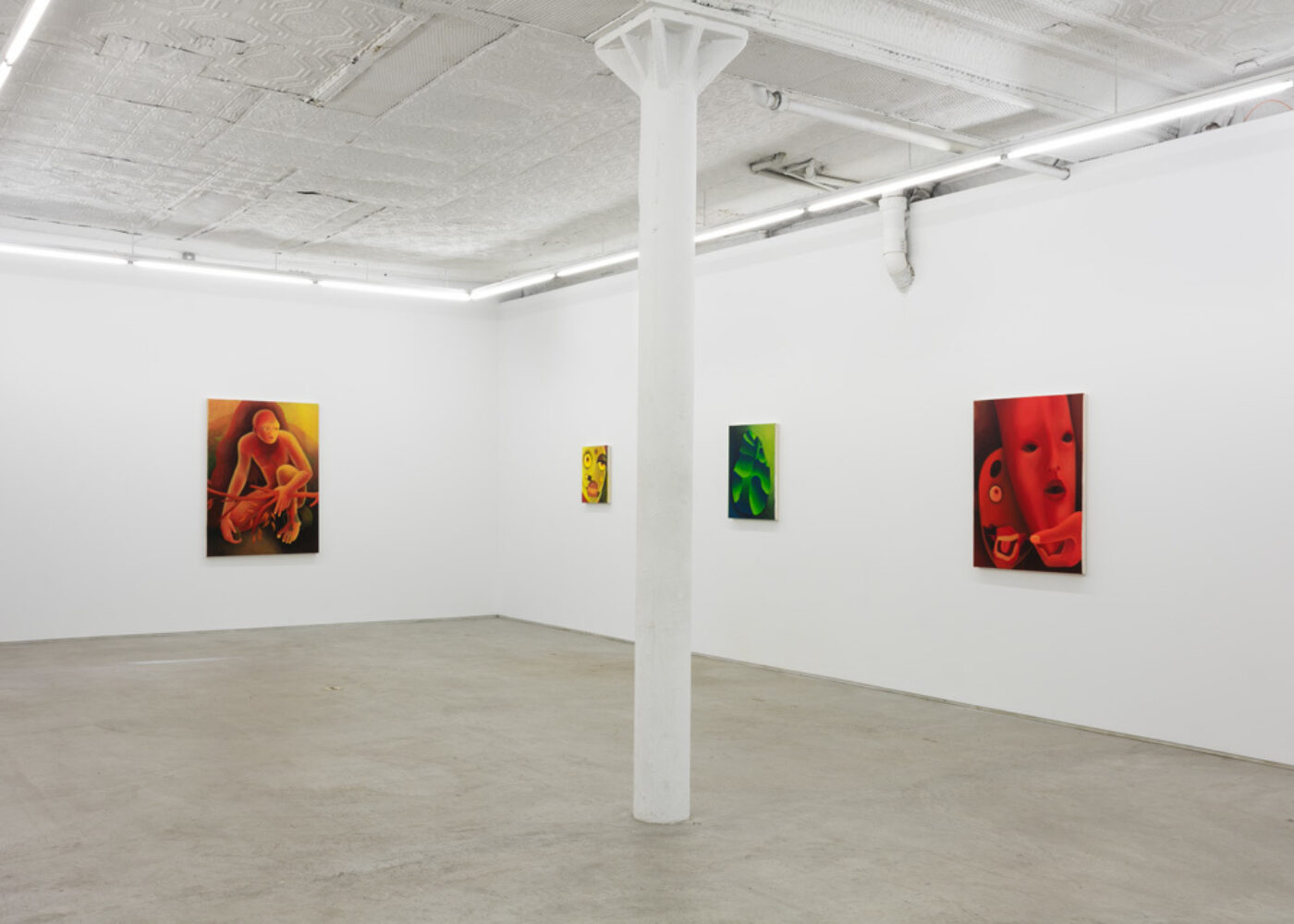 OD We’ve talked about how references to science-fiction films enter into your work. Would you say that your paintings are works of science fiction? And can you discuss some of the more poignant references to the genre in your new paintings?

KS I do sometimes refer to my work as prehistoric science fiction, so yes in the sense that the origin narratives I explore are speculative fictions at least partially based on known parameters. In past works, I referenced the movie Ex Machina (2014) quite a bit. The design of Ava in the movie is also similar to Sophia the robot, so for a while they were my visual reference points when painting post-human figures. But in my newer paintings, I have been looking instead at robotic love dolls called RealDolls. The skeletal and facial structures beneath their silicon skins have become my new symbols for the post-human. This is very recent, but I think they are particularly interesting because as potential post-humans they are completely dependent on the body.

OD Would you care to elaborate on how the physical material structures of RealDolls inform your speculative portraits? RealDolls are extraordinarily uncanny objects, and I’m curious to know how you translate that uncanniness—if that is what you’re analyzing—into your paintings. Perhaps you might describe a specific painting from your current exhibition?

KS Initially I didn’t know that there were robotic RealDolls, so I think I was surprised to find that the underlying structures of their heads can be quite complex. The first painting to reference this is Head/Stone II (2018), and I made it after seeing some images and videos on how the robotic dolls are made. In this painting, the skull of a robotic RealDoll is overlaid or intersected by a stone tool. The doll’s skull is totally uncanny, and what makes it this way is the tension between seeing yourself in its form but not fully recognizing the human in it. I find this tension to be more distinct and compelling in images of doll skulls and detached skins than in images of the fully articulated dolls, so those are the things I eventually use as references for paintings. In Head/Stone II, the image of the stone tool is similarly positioned as uncanny. You can start to recognize yourself in it, but not fully. Like the line in the dirt, it acts as a mirror, but perhaps one that is less crisp and clear. 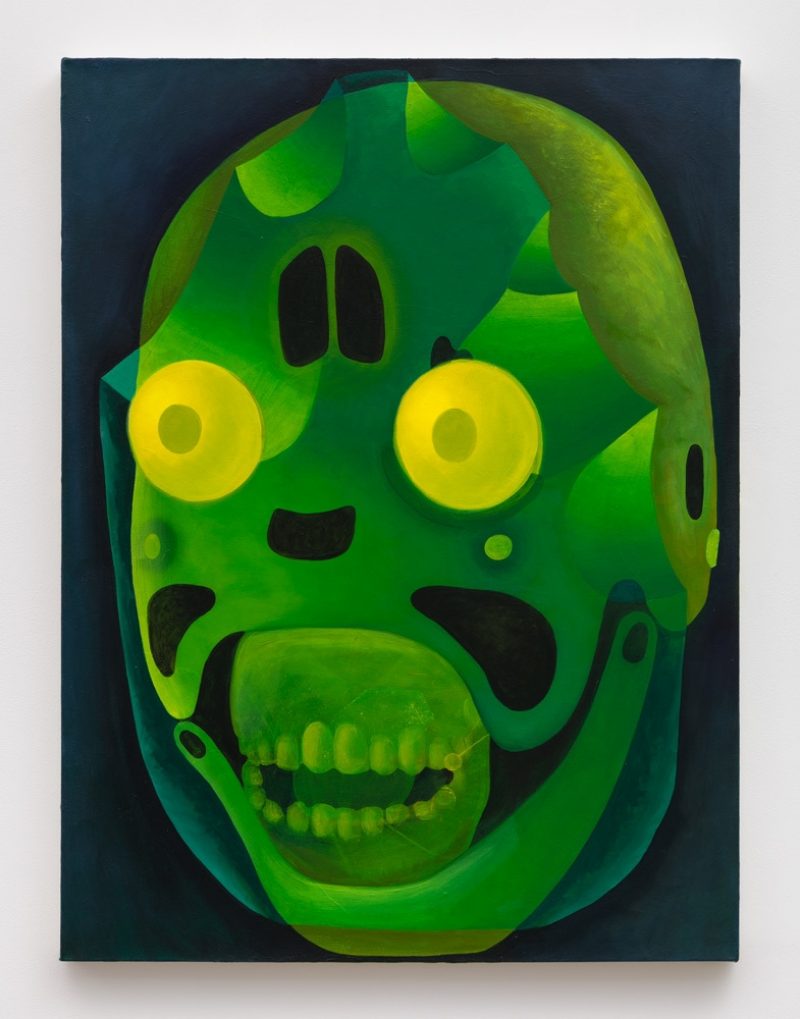 OD I think the uncanniness is amplified and accelerated by many of your color choices. Where do these hues and tones come from?

KS I really like the idea of applying these bright and luminous colors to prehistoric imagery. It can make my paintings feel somewhat otherworldly, but it also complicates their sense of time and plays up a tension between future and past. A few years ago, I was almost exclusively working in pinks, reds, and greens. I was interested in pink/red and green as color opposites, but after some time those color relationships started to run their course. Pink turned into red more and more, and now I don’t use pink at all. Then from the reds came new colors like oranges and yellows. But no matter what the overall color palette of my work may be at a given time, I am pretty consistently interested in a limited palette within individual paintings. Sometimes I’ll start a painting with a lot of color, but by the time it’s done there are only analogous colors left. This is something that usually happens intuitively. Plus, each painting is typically focused on a single moment, a single figure, or a single object, so the limited palette really feels synonymous.

OD I think your paintings show the viewer who we have been and who we might become. How, then, might we locate ourselves as present-day humans in your paintings?

KS I think that if my paintings lead you to think about your past, and possible futures, then you have already located your present-day self. Our present-day human self is always tied to how we construct our future, and also how we reconstruct our past, so I’m not sure if it’s possible to fully investigate those independent of one another.

Kristen Sanders: Early Bodies is on view at Brennan & Griffin in New York City until April 7.

Owen Duffy is an art historian, curator, and writer based in New York. He is a Contributing Editor for Momus and a member of Essex Flowers. 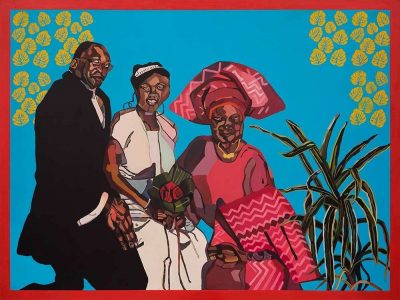 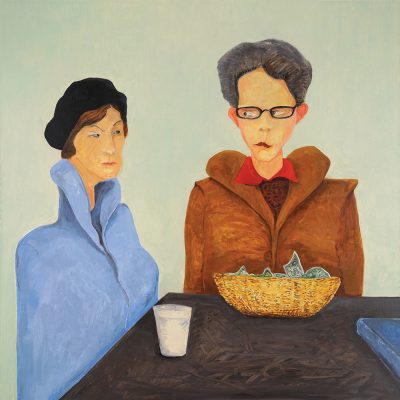 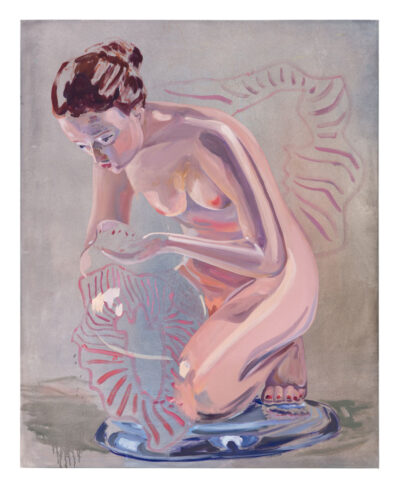