The Man Who Wasn’t There by Paul Brunick

Paul Brunick interviews Tony Pipilo, author of the upcoming Robert Bresson: A Passion for Film, an “aesthetic biography” on Bresson. 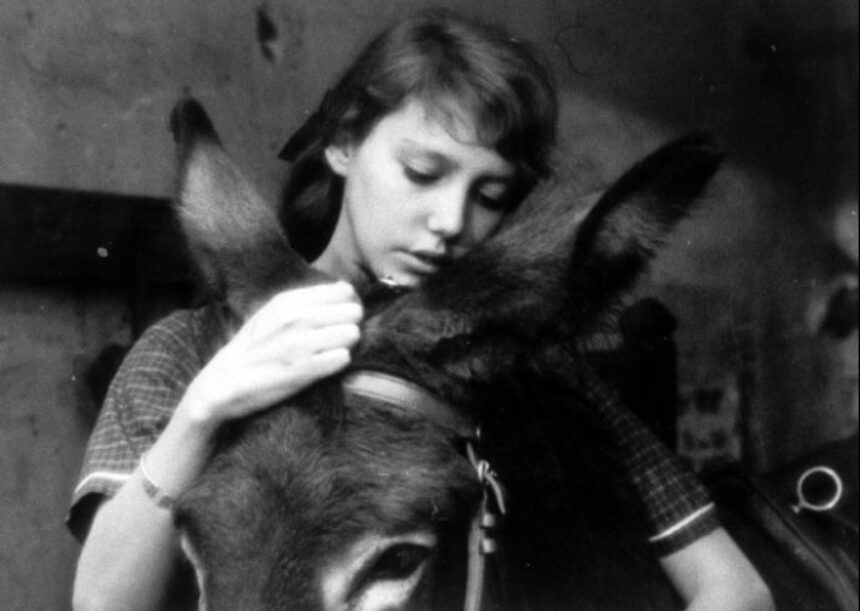 So wrote Robert Bresson in his published “working notes,” Notes sur le Cinématographe, the 1975 compendium of the late director’s epigrammatic pensées on film-as-art. Bresson’s quote referred to the affectedly flattened and dramatically elliptical mode of characterization that became one of his stylistic signatures: the radically interiorized anti-performances of nonprofessional “models,” whose inexorably incremental trajectories and oblique suggestion of just-below-the-surface realities evoked the structure of icebergs. And yet Bresson could have easily been talking about himself. When Paul Schrader dedicated a third of his book, Transcendental Style in Film, to interpreting the work of Bresson, the master himself sent a personal letter. “I have always been surprised,” Bresson wrote to this passionate devotee, “not to recognize myself in the image formed by those who are really interested in me.”

Tony Pipolo, author of Robert Bresson: A Passion for Film, a new monograph on Bresson to be released by Oxford University Press this January, has categorized his book as “an aesthetic biography.” Fine-grained stylistic and thematic explication (carefully situated in its broader film-historical context) dominates the commentary, but Pipolo also avails himself of biographical material where it helps illuminate Bresson’s films and, reciprocally, reverse-engineers a psychoanalytical profile of the director by way of his recurring themes and formal choices. Pipolo’s mode of psychoanalytic criticism is admittedly heterodox, and his embrace of the dread “intentional fallacy” will no doubt displease the formalists; but what the book eschews in methodological rigor is compensated by readability and broad accessibility. 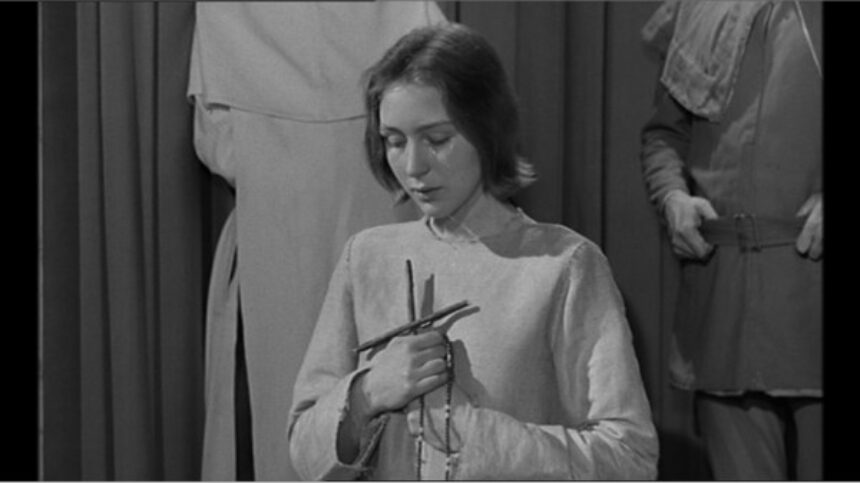 From THE TRIAL OF JOAN OF ARC (1962). Courtesy Anthology Film Archives.

Is this the “definitive” book on Bresson that the world has been waiting for? Probably not. Bresson is truly the most inscrutable personality in the pantheon of great film directors. The wide range of critical responses to his oeuvre suggests an almost Rorschach-like indeterminacy to his work. Pipolo provides a more apt categorization of his book when he describes it as a “deeply personal response” to the films. And indeed, a lifelong and deeply sincere appreciation of Bresson’s work is manifest throughout. That’s occasionally a detriment (the accumulation of detail can occasionally feel plodding) but it’s primarily a strength (the book is best appreciated as a treasure-chest sourcebook of insights and anecdotes lovingly collected over the course of years).

Bresson the man, to my mind, remains as elusive ever. But his films—some of the most deceptively simple and profoundly moving works in the history of cinema—once again come alive in Pipolo’s work. Respect, man—that’s palpable enough for me.

Paul Brunick You make a sweeping claim on behalf of Bresson early in the introduction: “Bresson’s practice goes beyond honing an individual style. His importance to film history lies in his efforts to create a paradigm of narrative cinema…arguably as critical as Griffith’s or Eisenstein’s.” With all the Bressonian economy you can muster, what does this paradigm shift consist of?

Tony Pipolo Well, as I noted in a footnote I’m hardly the first to say or hint at such a thing. The Russian filmmaker Alexander Sukorov once said something quite similar. I guess what I meant is that to lock Bresson in as some kind of eccentric director or as a “spiritual visionary” is to trivialize him. What he aimed for (whether he succeeded or not) was to craft a form of narrative cinema that would not depend on the things most narrative cinemas depend on—acting, excess, narrative plenitude, stuff like that—which he felt we didn’t need. So in that sense he was taking a given system, narrative on film, and stripping away things weren’t essential.

I think if he were alive today he would admit it’s a goal that he hadn’t totally achieved; that there’s still a dependency on “theatrical modes” of expression. But it’s this idea of a filmic narrative, purely done, through purely filmic means. He wasn’t just an auteur with a specific vision or pet themes. I think he was doing something with broader ambitions. In the same way that Griffith had a certain idea about how to tell a story, and Eisenstein had montage; Bresson says, montage yes but not in the way of Eisenstein.

PB That’s one thing that really interests me: his inter-shot relationships, what he calls “rapports.” It’s an editing system that, you’re right, is not analytical editing, is not intellectual montage. At its purest I guess it’s a kind of constructive editing; the way he builds a scene detail by detail, sequentially, which extends to the ways he builds his narratives. But anyways, there’s a paradox that intrigues me.

Bresson’s style is often described as “self-effacing“ because it’s so prosaic. Yet because the syntax is so rigorously simplified, because the images are so studiously “unstudied,” the style ends up calling attention to itself. And in that sense it’s almost self-aggrandizing; at least partly driven by his creative agon with other artists, this need to be important, to be a landmark director.

But I think he’s a profound filmmaker. And you don’t get that way by just focusing on the means. Somebody else doing that, working at the level of minimalism, is not going to bring about the same result, I think that’s clear. When I was studying at NYU, there were people who would make comparisons between Bresson and Hitchcock; they both were such meticulous editors, they were both raised Catholic with a kind of austere moral vision (whether they kept to it or not). But there’s something in that, you know, look how many people think they can imitate Hitchcock. They can’t. And there is just as much personal investment in the style and the technique in Hitchcock as there is Bresson. That there’s something deep going on, that the style was not just appropriated for the sake of doing something different or clever or even establishing a paradigm, but really: “This is the way I need to use this medium to reach whatever it is I am looking for.”

PB Right. I didn’t mean to imply that it was insincere or calculated. It was less about Bresson than his reception and particularly this recurring critical fallacy, which I find somewhat analogous to the reception of the Dogme films. I mean, Dogme was conceptualized and received as a kind of anti-auteurist movement, at least anti-mannerist, diverting attention away from technique, away from the process of narration, in order to privilege the characters and their story, the profilmic world, etc. But this point is accepted uncritically in reviews that focus entirely on the technique: the “rules” of Dogme, how carefully they were obeyed, etc. with no apparent awareness of the disconnect. And this same dynamic plays out in Bresson’s reception; that he always used a 50mm lens, for example. Did you a notice a trend in interviews that would indicate Bresson felt more comfortable talking about theme and story to technique, or vice versa?

TP Well, the interviews you get a mixed bag. There’s a very famous interview called “The Question,” goes back to ‘67 I guess, and he’s being interviewed by Godard and a few people for Cahiers du Cinema. And wherever he was really badgered, and Godard badgered him quite a bit, (“What do you mean they don’t act? Of course they act. You’re making them do what you want to do.”) “NO,” Bresson would say, “No, no, no. You don’t understand what I’m doing.” And Godard said, “I guess I don’t.” So I think it was hard for him to explain what he did because a lot of it was intuitive, really intuitive. And what does that mean? I think it has to do with his own evasiveness, his psychological needs mixed in with his own evasions about his own artistic evasions. For example, when you talk about Bresson’s use of ellipses, I don’t think it’s only a matter of using narrative in a particular way, it has thematic functions as well, it has psychological functions—to leave things out is something he likes to do. 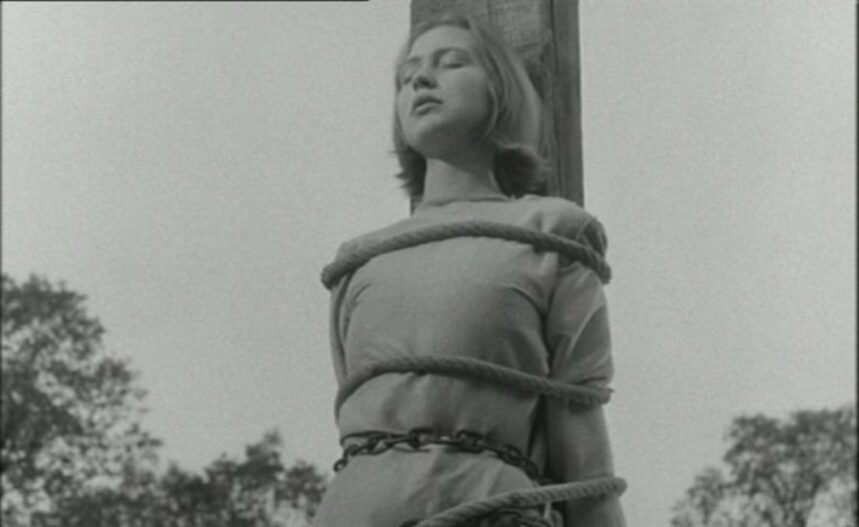 From THE TRIAL OF JOAN OF ARC (1962). Courtesy Anthology Film Archives.

PB You call the book an “aesthetic biography.”

TP That wasn’t my original intention. I’ve been working on this book for over ten years, in different ways, and it was never my intention to apply any kind of psychoanalytic thinking. It was only by watching the films again and again and writing about it, that some things just presented themselves—too many patterns, too many similarities, too many ways in which the determined track of each films began to say something to me about him. That this was really his life. Even the use of the model—while his aesthetic reasons are very sound, it also facilitated his being able to identify with and project himself onto these characters. Using models was a way he could contain the characterizations, so that none was so outsized he couldn’t fit into it in some way. His aesthetic choices ultimately do tell us something about him.

I’ve thought about writing a biography, but it wouldn’t be easy. There’s still a lot of resistance to it. A lot of people who knew him and worked with him don’t want to talk about it. Because Bresson was a really private man.

Robert Bresson: A Passion for Film is out on January 19, 2010 from Oxford University Press.

On Thursday, Dec. 17 at 7:30 P.M., film critic Tony Pipolo will introduce a rare screening of Bresson’s The Trial of Joan of Arc at Anthology Film Archives. A book release event follows. The film will be screened again on Friday, Dec. 18 at the same time.

Paul Brunick (twitter.com/cinebrat) is a young film fanatic residing in New York and a regular contributor to Film Comment magazine. He is currently completing an M.A. in Cinema Studies at NYU.