The Fatalist by Lyn Hejinian

There was a message. I gave it
to you, you passed it to me, I returned it, and now you have given it
to me among others cascading like a million peas
from a thousand pods to the floor with hideous exactitude.
“Duck the pot shot, fuck the hot shot,” said the doctor to her soldiers
but they had heard the joke before in other friendships
forced by jokes. The lab technician came out
and, glancing at the sign-in sheet, said “Ms. Cunningham?” Both
the white woman and the black woman stood. Furthermore
they were both schoolteachers able to swim through steel
with their skepticism digging a hole for the truck
to dump sand into. The driver triumphantly stretched
his hands into the air and shouted a grand affirmation: “NO!”

The best words get said frequently—they are like fertile pips.
Apples fall heavily to the ground and lie in the sun, their scent
abandoning them as a philosophy that cannot be further perfected. Love
releases playful sensations even from serious things providing a life
to think about. Take R—the only thing
R could credit herself with was having lived
her life and so she not only kept an account of it
but did so not in the privacy of a diary but in the form of letters
—abundant, profligate, indiscreet—that I want to write
to you so as to note something that I read
this morning: “It’s not that this or that means something
to me but that this!—or that!—means something to me.” Musically
R bequeaths herself to posterity as a scholar might
bequeath his or her library blowing twisted veils of rain
past the narrow and curving windows in the last hour that will carry us along
to the time when those who come after us will learn
what we know—a man with a mustache waxed and dyed
green, a line of tall people and a woman at the door, a committee
of children without scooters but not mournful, a poet with a motive, a pilot
with a flashlight, a sulking but fascinated scholar, and Goethe
no doubt for whom R would have released a flock of red canaries.

If it’s light, it is day, if it’s day, it is light and the high heavens
bobbing on the surface of the sea are the surface of the sea
and that should be their name as the wind lifts it
giving it its name, the one that lets us see how like a bunch of grapes
we are when practicing meteorology. A lucid thinker
needs some names. Rosie? Soren? Certainly
reality provides the materials
from which the imagination can concoct what it cares about.
Of course it would be useful to have different means
for describing different projects if we could keep them straight
beginning with the bottom one, which shows the androgynous child
staring out from a pink landscape that is all horizon
with a calla lily. Hallucinations are always possible
and currently likely. I got up this morning
hoping maybe that would help me get ahead of the game
but already before it was my turn I was asking “What game?”
and the only answer was “This one.” Now I have to ask “Is it fun
if played?” Everything that is played is
somewhat accidental and this game is committed
to heterogeneity, maintaining the otherness of what it does
out of respect for the otherness that distinguishes the world we share
with others. I’ve begun. Your turn comes next
but you could wait until another emergency arises and instigates another
assignment meant to get citizens to reflect analytically on the parts of life
toward the end of the sequence that are anti-lyrics, dystopic
and dysphoric. Feel free. I can’t imagine
enduring weather that heats a day to 121 degrees, the living inert
while things get noisy, snapping in the underbrush, bark
buzzing, thefts occurring
without thieves over the next few weeks if not exactly as I’d hoped
at least well enough, thanks.

The children now admit that they are violent. Let’s lodge them
in philosophy until their house is built. I like the tether
and send a message to a fugitive more and more
taken by the nightingales information, which is all about
the desperately ungraspable vastness of meaning
everywhere and the fact that as flesh and blood
mortals we are doomed always to lose meaning
for lack of adverbs. Meanwhile we are slowly to lay out our differences.
Language writing rejects the notion of genius
and the New York School embraces it, I am sure,
it is somewhere here in the room, D said so, but so are paper breads
and notebook cheeses. And truth be told, Hans Christian Andersen
has done things with the Danish language that no one
before or since has been able to do. Chefs and foodies
may fly in from all over the world, Martha Stewart may be there
but only two photographers will be allowed to play tapes
of poets reading poems and in particular tapes of Gertrude Stein doing so.
Of course. The most popularly demanded goods are always those
of perfect quality. The cheerful woman in the yellow scarf strides
toward us bearing towels. Her new bicycle was a floor model,
but it is strong and she is fast
and dexterous enough to go on
as long as the streets provide her with a theater for exaggeration.

—Lyn Hejinian’s most recently published books of poetry are Happily (Post-Apollo Press, 2000), The Beginner (Small Press Distribution, 2002), and Slowly (Tuumba Press, 2002). The Language of Inquiry, a collection of her essays, was published in 2000 by the University of California Press. Two new books, The Fatalist (Omnidawn) and My Life in the Nineties (Shark Books), will be published in the fall of 2003. She lives and works in Berkeley, California. 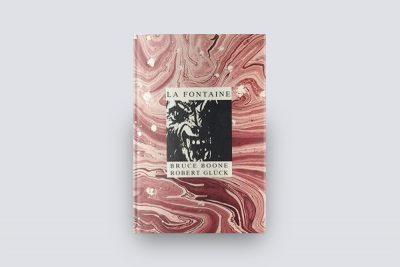 In any narrative, facts are present or not. One might assume the more facts, the better the constructed history, since facts are meant to reflect what can’t be computed by storytelling alone, which is said to be subjective and therefore inaccurate.