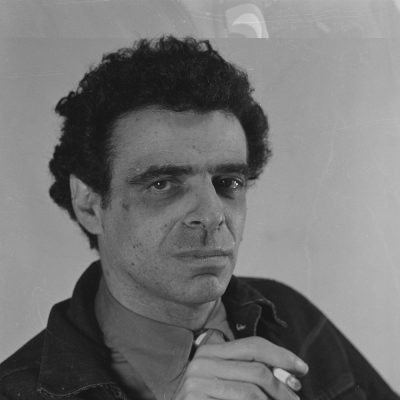 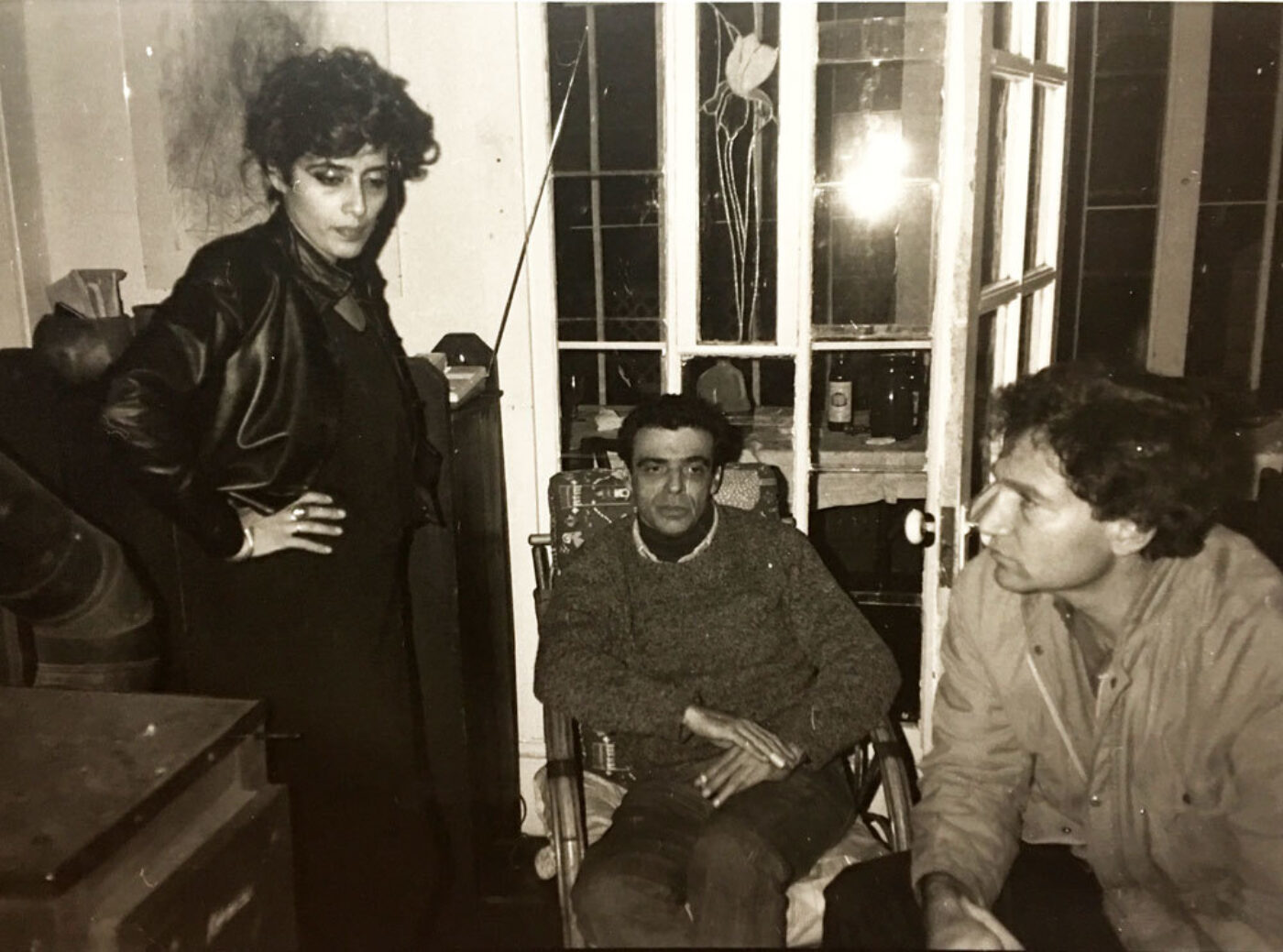 [Part 1 and part 2 of the interview are available here and here.]

Jonathan Silver was born in 1937 in Brooklyn. His mother was Argentinian, with deep roots in European Jewry. His father was a Brooklyn District Attorney and Surrogate’s Court judge. Jonathan dropped out of school at thirteen and did not continue his formal education until 1959, when he enrolled in Columbia University’s School of General Studies. When he and I met in 1967, he was living in a storefront near Columbia and as much art historian as artist. After completing a masters thesis on Constantin Guys, he began work on a doctoral dissertation on Alberto Giacometti’s painting, also under Meyer Schapiro, a transformative figure in his life, with whom he remained in contact after becoming a sculptor. He was passionate about Cubism, psychoanalysis, epic poetry, Egyptian and Hellenistic sculpture, Baroque theater, and Biblical and classical myths. About Beethoven, Picasso, Goethe, and Thomas Mann. For The New York Times, I reviewed his immersive installation-environments at the Gruenebaum Gallery (1987) and Sculpture Center (1989). In 1995, for Sculpture Center, I curated an exhibition of his haunting 1970s heads.

In fall 1991, Jonathan was diagnosed with lung cancer. When the gravity of his illness was clear, I asked if we could talk on tape. Prior to his death in July 1992, I interviewed him nine times. When Marion Smit of the Jonathan and Barbara Silver Foundation asked me to write the essay for Jonathan Silver: Drawings and Heads at the New York Studio School until January 20, I listened to the tapes. They are a treasure. Jonathan spoke freely and expansively about his life and work, and about the many other concerns to which he and I had returned, again and again, over twenty-five years. Excerpts from those interviews appear here. What we spoke about and how we spoke about it belong to a different time, but maybe his language and thought somehow also belong to the present.

Michael Brenson How did you get the idea of reusable figures? Figures that would then take on different identities or roles?

Jonathan Silver It’s not a big leap to understand that figures in different contexts have different meanings. As soon as you juxtapose one thing to another, you change the meaning of both. As a practical matter, in the course of doing installations that are large and require lots of figures, it becomes sensible to look for the various potentials of meaning. You have three or four figures that are central, and you may need to make others, a full cast of characters, and they suggest themselves naturally.

MB When you see these figures in installation contexts, do you feel that they take on different personalities than they had before?

JS They change their meaning, yes. They do. They’re not completely different, but an aspect of their personalities emerges in relationship to a central figure. Once you establish a relationship, a certain aspect of character is heightened. As with people. Nobody’s the same, exactly, with the different people in their lives. 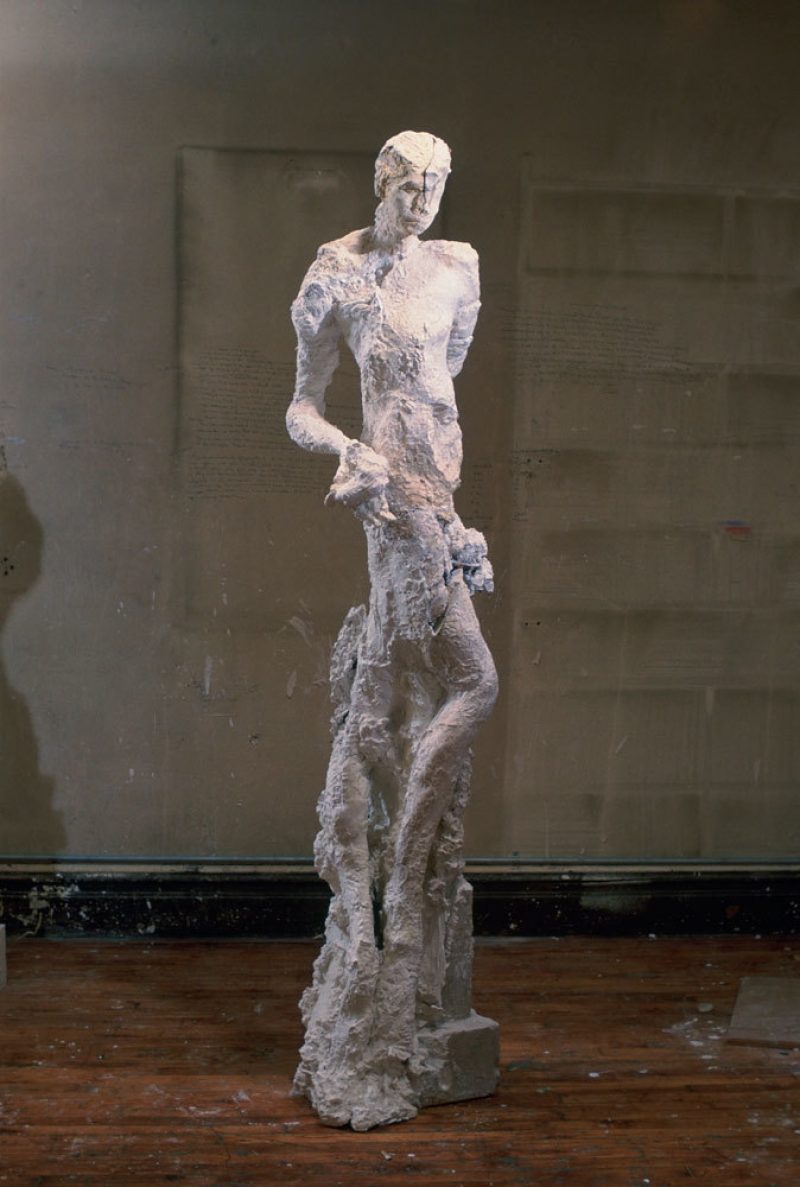 JS These I made as isolated figures, as single figures.

MB When I think about the refusal to allow an individual figure to carry a single identity, I wonder—philosophically, artistically—what you mean by doing that?

JS I’m not so sure I refuse to allow it. If it is standing alone, and that’s where it is, it’s okay. But I do have the same doubts almost every contemporary artist has had about the self-sufficiency of the individual artwork. That leads back to the idea of installations, and letting works take on meaning in relation to context, or dramatic or narrative situations. I think the same thing is true of an awful lot of figures in the Baroque, in the Renaissance, and in Mannerist sculpture, too.

MB In what way?

JS Well, obviously, if you take Night out of the context of the Medici chapel, you’ve got a whole different story.

MB But it would have been inconceivable to take it out of there.

JS That’s right. And I think it’s almost true, always, for every individual figure—like the David belongs to Florence. It’s deeper in the history of sculpture for the work to be attached to a context and to borrow some of its meaning from a particular situation than the other way around.

MB This seems to fit with the syncretic idea in your work, that the figure is made up of many different parts put together. A figure would not have an absolute, frozen identity.

JS I think that makes sense. There’s an inherent resistance to the idea of having something locked in, any more than I want to be locked in.

MB Even though these figures are very much what they are.

JSI think they stand alone. I don’t think that’s a contradiction. And there’s always a trade-off, too. There’s some aspect of the figure that gets obscured when you bring it into relationship to others, which emphasizes a particular aspect of it. So there’s always some degree of exchange. You get something, and you give something up.

MB One of the things about your studio is the way they’re put there. Everything does seem to be part of one family, no matter how they might be made.

JS They are. They have the same parent. (laughter)

MB If you made figures for the outdoors, how would that change the way you think about figure and situation?

JS What you do then is scale your ambition down into basically a decorative scheme. I just don’t think there’s any way to make outdoor sculpture that doesn’t have an idea of primarily architectural embellishment, as opposed to the architecture embellishing the work, which you can get in an interior space. Maybe, if you’re lucky, you can take charge of the sculptural energy and the whole space becomes part of your work. You’re inside the sculpture. 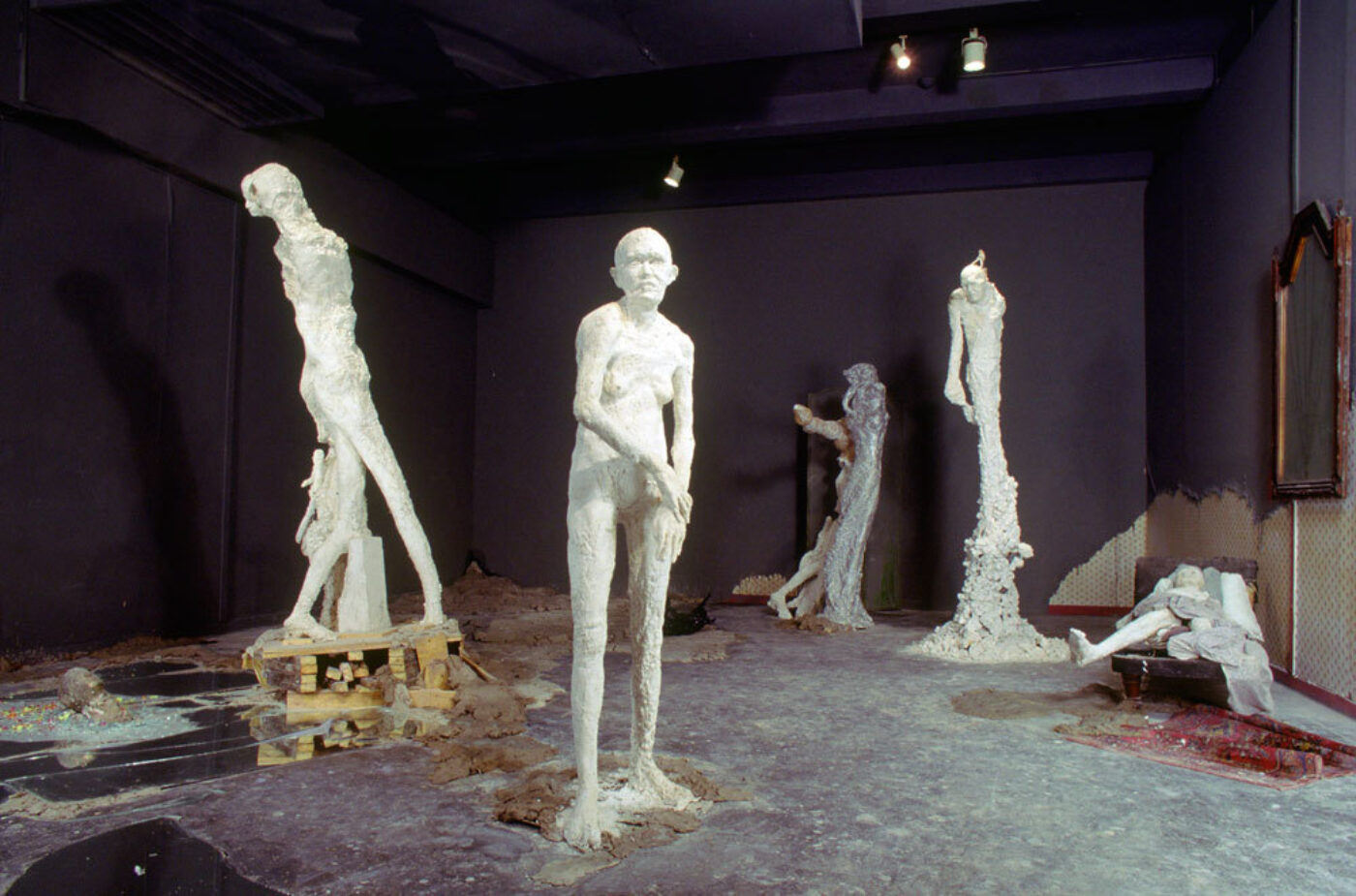 MB When you think of space, do you think about your installations primarily in terms of a unified mood or atmosphere?

I’ve always found it extremely important, in doing installations, to cover the line where the wall meets the floor. Because it lets the space float. It creates just enough ambiguity about where the floor is—not a literal ambiguity, but just enough doubt as to where that meeting occurs, so that the space could be animated. That line, around those points, is deadly, in terms of taking over the space and making it harder to create the spatial illusion.

JS It’s perfectly understandable, because the less clear the context in which art is going to be experienced, the more important it is for the artist to establish clearly the context he wants to establish. In other words, he’s got to give it a context, because there is none for it out there. A painter doesn’t have quite the same problem, because he can create a world within the borders of the painting. 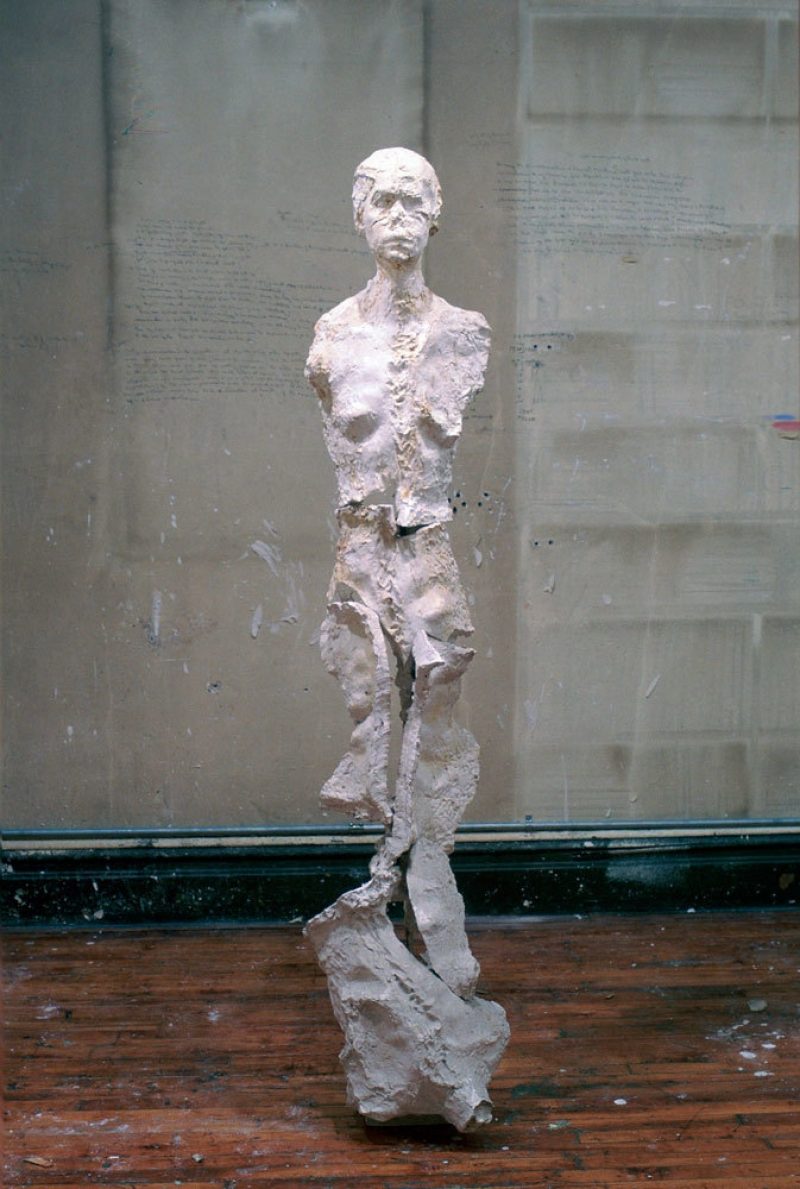 MB But there’s a point where, sociologically, the individual object, standing on its own, becomes more problematic, and then less problematic; and you know that in the last few years it’s become more problematic. But it’s not an absolute thing.

JS I don’t think it’s an absolute thing, either. It’s like there are different subject matters. You don’t have to do one or the other all the time. You can give very different kinds of pleasure. There’s a certain kind of pleasure someone can have from a self-contained object that exists in a home, or wherever, and stimulates a whole different set of associations. Not everything has to be a grand, world-shaking statement. I think there’s room for that. I’ve certainly done small pieces that I’ve liked. I don’t like small sculpture, I don’t like to do it, although I think some of them are fairly successful. When the sculpture gets to be life-size and over, there’s a whole different relationship to the surrounding world and to the spectator than if the sculpture is smaller than life-size. If it’s smaller than life-size, the space in which it exists is an imaginary space. In other words, if you look at a head of a figure that’s big, you don’t think that it’s a shrunken head. You interpret its smallness in a perspective sense. I want to engage the real space of the spectator, in the sense of the installations. That’s what’s most interesting to me.

MB A dichotomy has been set up that I think is somewhat misleading and destructive. What makes an installation like the Gretchen Room powerful is that the central sculptural figure is powerful. [Gretchen is the name of the sculpture of an irate pregnant woman with a cherub overhead that was the heart of an installation at Victoria Munroe Gallery in 1992.] Everyone, I think, who can make installations that really affect people can do it because they’ve mastered the individual object, to some degree.

JS I agree with that. That’s one of the things that I take special pride in—that it’s real sculpture, which could exist outside the context. I think you need that. It’s like a character in a play. You imagine Hamlet as a three-dimensional character although you only see him two-dimensionally, within the context of the drama, as it’s given. You imagine him as fully three-dimensional and existing outside that context. I think that’s what’s going to make a good work of fiction of any kind, whether it’s sculpture, or anything else, believable.

MB Many sculptors make different kinds of works, for multiple contexts. Mary Ann Unger does her private pieces and her public pieces. Martin Puryear does individual sculptures, and he does environments and what he calls “amenities.” Magdalena Abakanowicz, Richard Serra—it’s not either/or. It can’t be.

JS No, it can’t be either/or. Very often pieces of installations didn’t start out being an installation. It sort of grows from an idea associated with a single piece. So I think it would be an unhealthy thing to limit yourself and say, I’m only going to do something since I originally conceived of it as belonging to this grand context. You never know when something is going to grow on you naturally. You always have to be willing to start from one move and take it where it leads you.

Jonathan Silver: Drawings and Heads is on view at the New York Studio School in New York City until January 20.

Coleen Fitzgibbon’s film Jonathan Silver: Infidel in the Studio will be screened at Anthology Film Archives in New York City on January 10.

Michael Brenson is an art critic and art historian. His publications include Visionaries and Outcasts: The NEA, Congress and the Place of the Visual Artist in America and Acts of Engagement: Writings on Art, Criticism and Institutions, 1993–2002. He is a member of the sculpture department of Bard College’s Milton Avery Graduate School of the Arts and a Visiting Senior Critic in the MFA program of the University of Pennsylvania’s School of Design. He is nearing completion of a biography of David Smith. 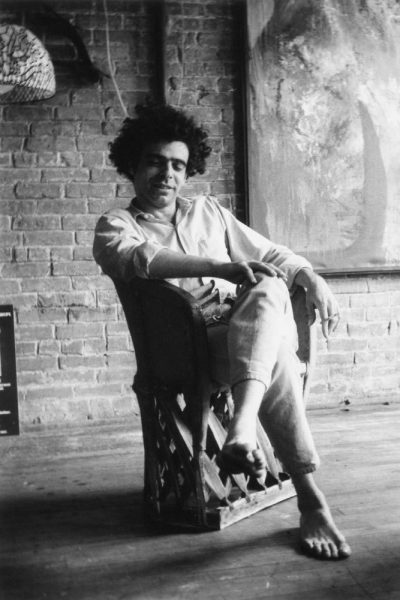