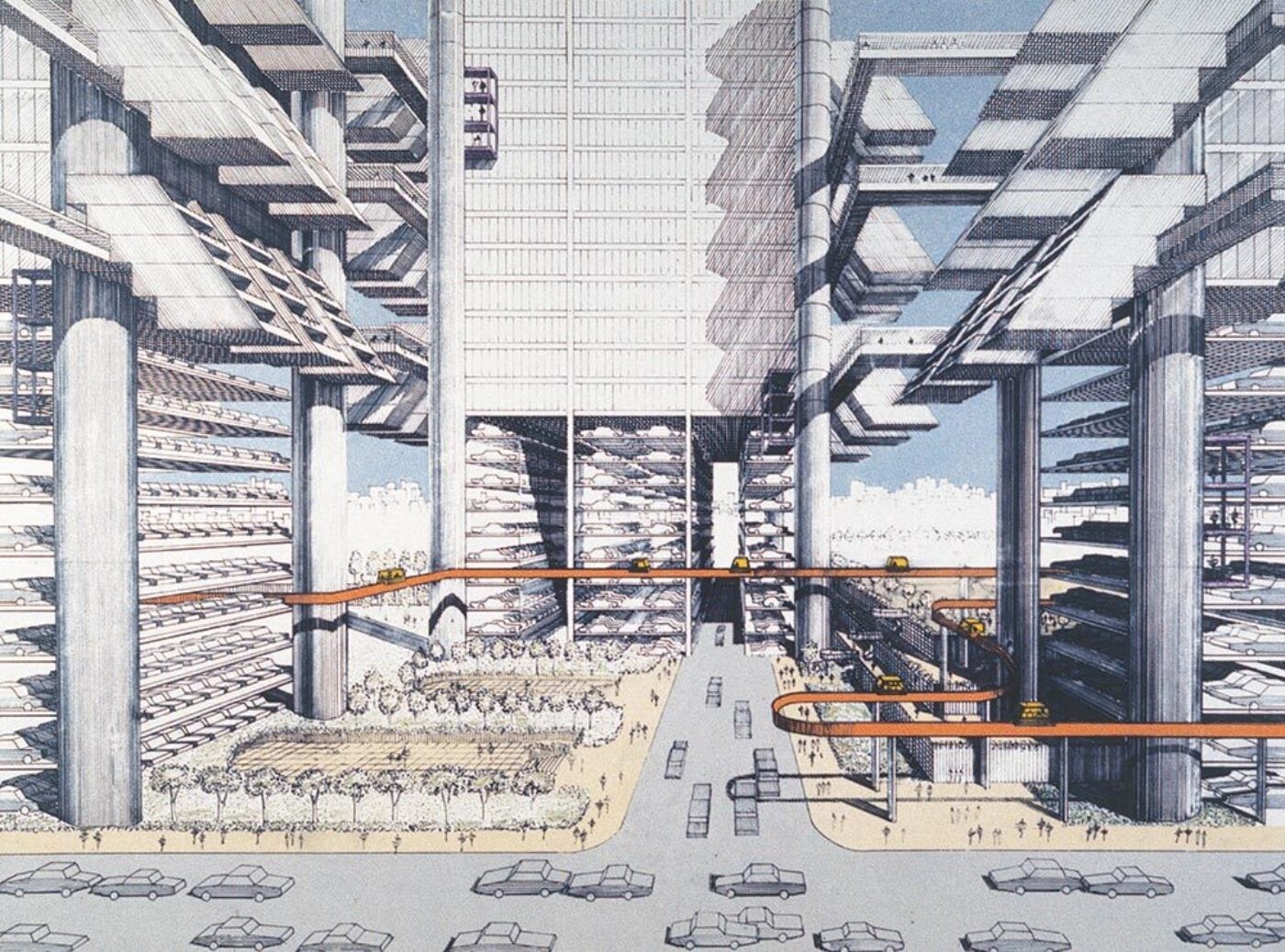 A string of tracking shots in The Architects, a 2014 short film by the artist Amie Siegel, surreptitiously scans busy design offices, offering a view into the laboratory of architectural making the rest of us rarely get to see. In Never Built New York (Metropolis Books, 2016), a collection of projects, plans, drawings, and arcana edited by Greg Goldin and Sam Lubell, we are given just such a privileged view across two centuries of New York’s feverish, boom-and-bust developmental biography. Yet theirs is an overflight of visions for transforming New York that never saw the light of day, at least not in flourishing built form.

A melodramatic sense of destiny haunts this anthology of often maniacal, sometimes whimsical, and nearly always ingenious architectural proposals, bookended by the relatively self-effacing, potato-chip-shaped 2009 entertainment pavilion for Coney Island by Nicholas Grimshaw. In 1910, for example, Mayor William Gaynor’s fervent attempt to add a congestion-relieving artery between Fifth and Sixth Avenues ended with an assassin’s bullet lodged in his throat. In 1954, I. M. Pei designed an extraordinary 1,497-foot-tall hyperboloid tower and transit hub to replace the beaux-arts Grand Central Terminal. Commissioned by Robert Young, then chairman of the New York Central Railroad, the project found a definitive finale in his suicide three years later. Young needed to parry revenue losses plaguing his passenger rail due to the postwar car frenzy. The same overweening accommodation fueled übercommissioner Robert Moses’s infamous schemes, like his effort to extend Fifth Avenue through Washington Square Park and clear the “slums” to its south, which triggered a popular response championed in part by legendary activist and urban theorist Jane Jacobs. 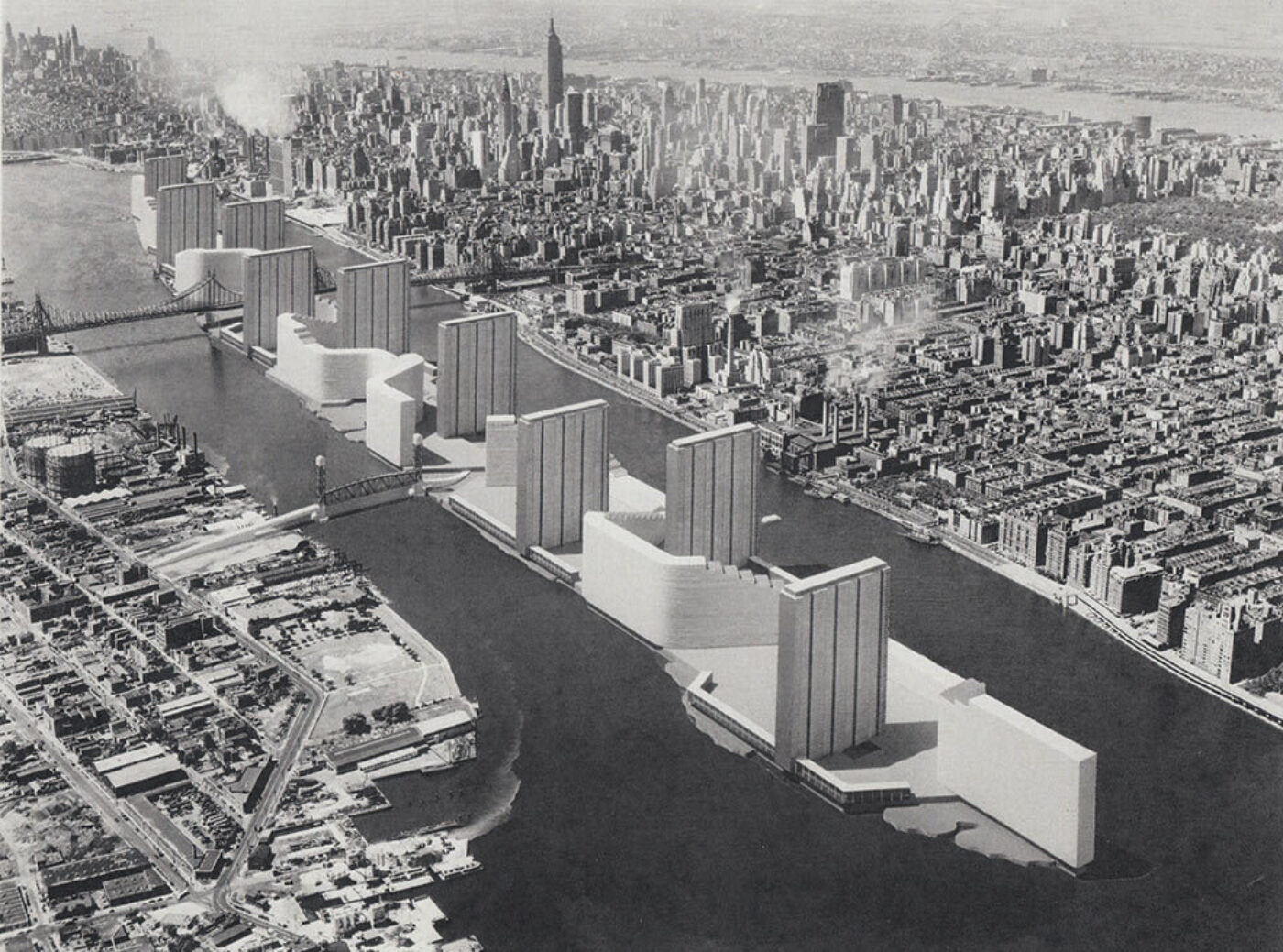 Generations may change, but architectural visions for this city obsessively turn on questions of status, property, and finance. The schemes we discover in this book are often less geographically than mythically determined. Flexibility, beauty, community—all pale in the braggadocio of a global capital where big ideas spawn even bigger solutions, like developer William Zeckendorf’s 1946 rooftop airport over Manhattan’s West Side, or Victor Gruen’s 1961 design for a mixed-use deck-and-tower blanket over Welfare Island (renamed Roosevelt Island in 1975).

The idea of the city as home and as livable space, it appears, has perpetually rubbed up against the idea of the city as infrastructure. We learn, in Goldin and Lubell’s tome, of the lacy, pneumatic-powered origin of the elevated subways imagined by Rufus Gilbert, as well as proposals to cut new avenues and diagonal boulevards by nineteenth-century architects like Charles Lamb, Julius Harder, and Henry Rutgers Marshall. We learn, too, of all sorts of strategies developed by powerful interests to materialize buildable space out of air rights, or landfills, or by consolidating entire city blocks. In 1934, engineer Norman Sper suggested filling in the Hudson River, while in the previous century surveyor James Serrell had imagined rerouting the East River. 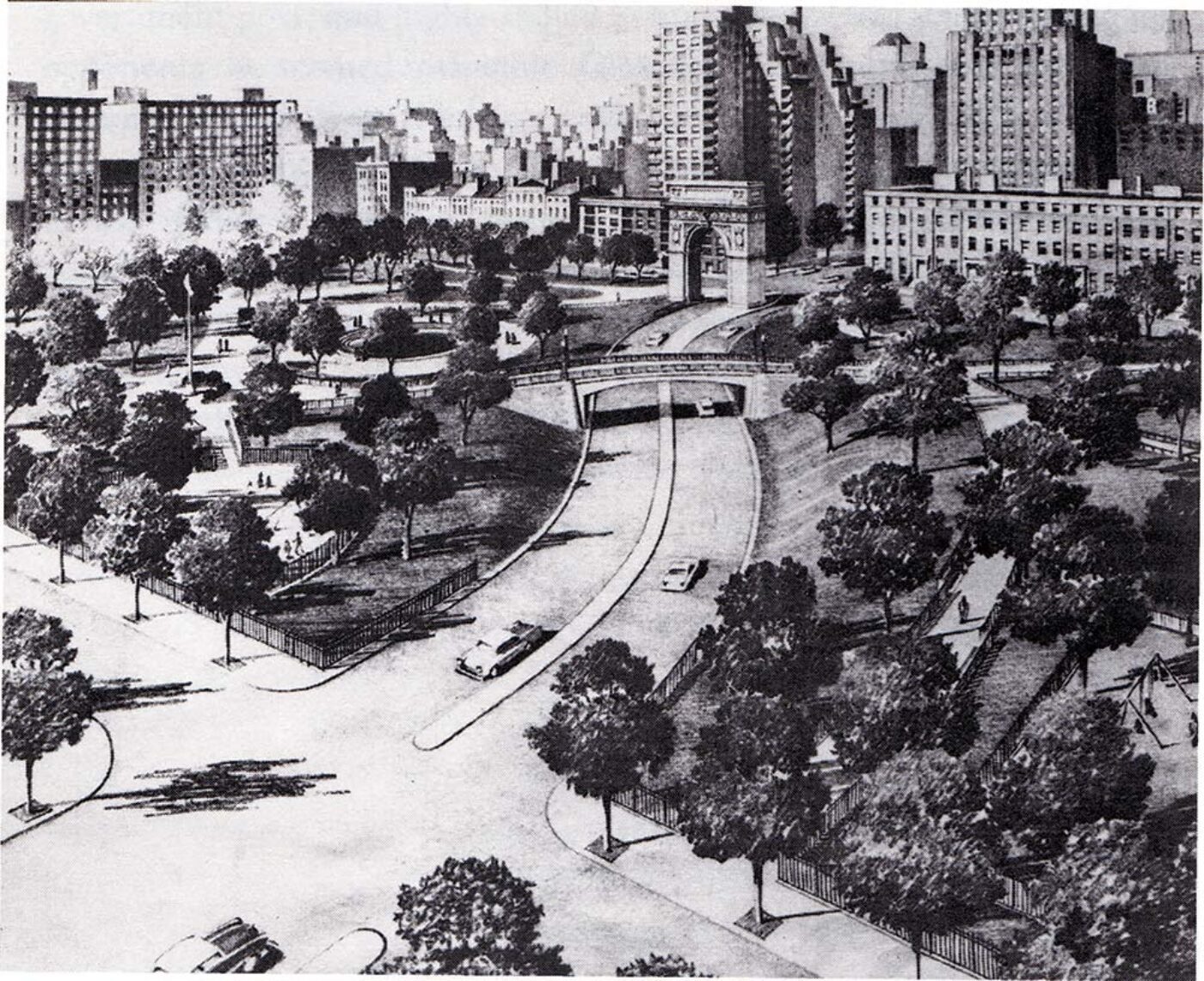 Familiar figures in the history of New York urbanism are all present: the Rockefeller family, Moses, Jacobs, and Ada Louise Huxtable, the architecture critic who helped found the New York Landmarks Preservation Commission in 1965. We also learn about how the War Department aborted a Moses plan for a Brooklyn-Battery Bridge; how architect Paul Rudolph conceived an extraordinary industrial live-work complex south of the Holland Tunnel for the Amalgamated Lithographers Guild of America; and how Jacqueline Kennedy Onassis helped block a brute yet masterful scheme by architect Marcel Breuer for the redevelopment of Grand Central Terminal.

In their way, Goldin and Lubell account for what social economist Saskia Sassen has called urban “talk-back,” small-scale, bottom-up social advocacy. At times, it appears that the fate of New York has hinged on a well-chosen invective or two that would foment and drive public opinion. To cite one example, Manhattan Borough president Constance Baker Motley damned Moses’s Mid-Manhattan Expressway as a “Chinese wall across the waist of Manhattan.” In the age of Twitter, one could imagine this being a social-media bonanza.

Peppered throughout Never Built New York are struggles to bestow architectural marvels and preserve the je ne sais quoi of the city skyline. We learn, for instance, of Raymond Hood’s 1925 battery of skyscraper bridges over the Hudson River, as well as of another brilliant project by I. M. Pei, an expandable helical housing tower, which was awarded the first patent for an apartment building. Like a flip-book, this lavishly illustrated collection lets you skim New York’s unbuilt history pumped up on metropolitan dreams like Frank Lloyd Wright’s posthumously proposed 1962 bubble city for Ellis Island. Yet more immediately inspiring, in some ways, are the examples—surprisingly rare—of inventive reuse and adaptation of the real city fabric: Morris Lapidus’s 1970 proposal for a tower on stilts across the street from St. Patrick’s Cathedral, or John Johansen’s 1968 structural lattice system dubbed Leapfrog City, which would rise above and across existing buildings. 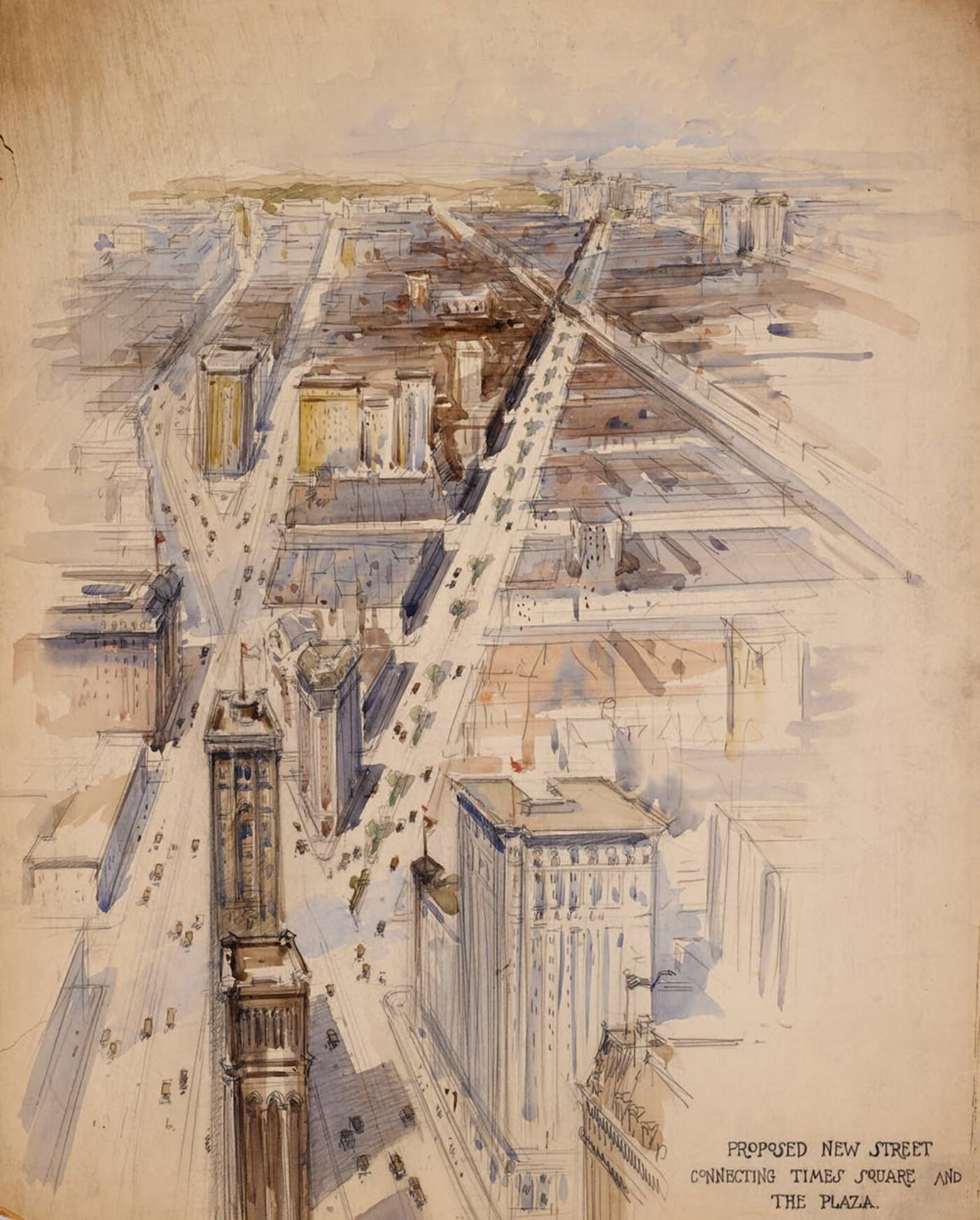 We only see what we can visualize. Never Built New York encompasses a record of renderings, images, models, and plans, as well as newspaper articles, conference proceedings, pamphlets, and public debates offering an opportunity to reevaluate the present in terms of the possible. The stakes of this volume lie ultimately in recognizing the potential of this shadow architectural history and acting on it. The most compelling sequence in Siegel’s The Architects shows a tabletop 3D printer that spits out an architectural model. In the background, Midtown Manhattan is visible through a window. It offers, in other words, an image of the built and the unbuilt in a single a shot. The same goes for Never Built New York. What else is a city than consecutive passages of material, experience, and vision layered through a picturesque window of time?

Pierre Alexandre de Looz is an architect, writer, and educator. He is cofounder of PIN-UP Magazine and a contributing editor of 032c. He teaches at the School of Visual Arts and Pratt Institute. 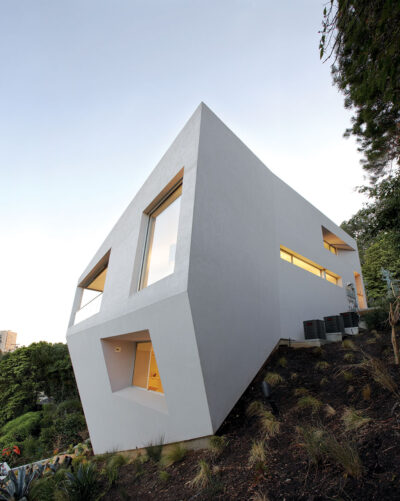 The artistic directors of the Chicago Architecture Biennial discuss their new Menil Drawing Institute and the role of history in contemporary architecture.