The Blue Stoop by Thomas Devaney

Naming is, if not possession, a performance of memory, a ritual of empathy. Thomas Devaney here enunciates a shared smallness writ large, making place of space and era of time, fleshing out a momentariness in terms to stay our bodies. 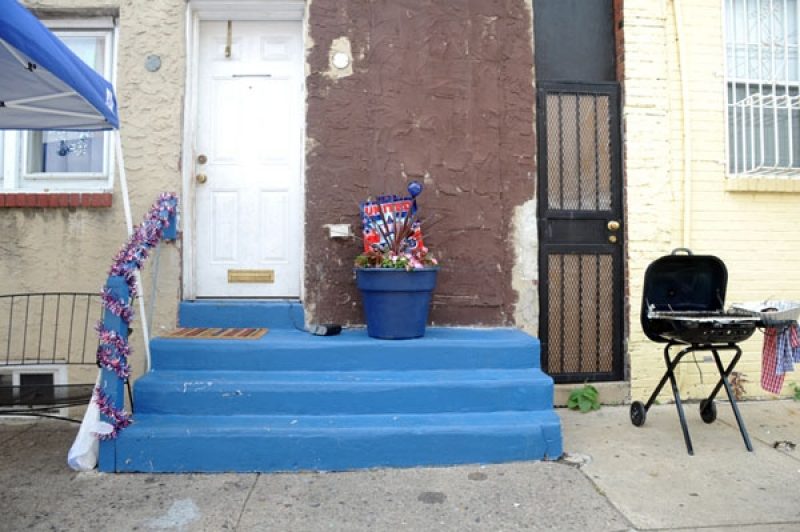 Who remembers the blue stoop?

I am laughing at the question—Who?

Everybody. All the names.

There is Franny and Tina.

and her red-headed brother Bobby.

Tommy Fliss and all the Flisses.

Anthony’s mother is leaning out the window.

Does she ever go out? Yes, every day.

She leans out the window all day long.

Everybody knows that, but when we say

he played the trumpet

we mean he played with everybody.

Yes, Tony Bennett, but have you ever heard

big bands—he played with them all,

and in some third-floor heaven he still is.

People say, Once upon a time a call was a dime.

They say more than I can say here.

They say, Don’t forget where you’re from,

but I don’t have to, because I never left.

than it used to.

I guess they know what they’re talking about,

but don’t tell that to Michael, Michael, and Michael,

and a generation of Roses weaned on a fresh coat

All the dirty kid faces that will never be clean.

Those are my faces.

Thomas Devaney is the author of two poetry collections, A Series of Small Boxes (Fish Drum) and The American Pragmatist Fell in Love (Banshee Press), as well as a nonfiction book, Letters to Ernesto Neto (Germ Folios). He teaches at Haverford College and is the editor of ONandOnScreen.

Zoe Strauss is a lesbian anarchist from Philadelphia.