The 19 Diaspora Paintings by Archie Rand 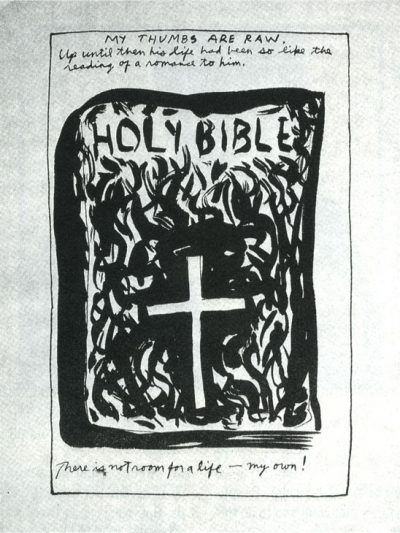 Except for the reactions of a few unusual patrons, my three-decade effort to make a symbology drawn from rabbinical commentary met with indifference, embarrassment, and hostility by the very community I hoped to address. The Jews who needed this work, it seemed, were hypothetical. A little over 10 years ago I decided to construct a visually cohesive, not textually obedient iconography.

Any estranged Jew, just shy of self-hatred, identifies somewhat on seeing Hebrew, to them the unintelligible but symbolic typeface of a recently shelved or long forgotten familial connection. Stewardship of not necessarily the Hebrew language but the comfort of biblical approach in that language, has been naturally curated, unopposed, by the Orthodox faction. These paintings may help disenfranchise that exclusive hold on biblical Hebrew and reallocate it to those who require identification, from both within and outside of Judaism, without the pressure of conscription to the whole nine yards.

I just read Balthus’s memoirs. Balthus, whose Jewish mother makes him Jewish under Jewish law, converted to Catholicism, and, for good measure, adopted fascist sympathies, in order to psychologically legitimize his purchase on Western art. Balthus’s hatred of Chagall is instructive, as Chagall is the only painter I can think of whose voice did not inhabit exclusion or victimization but positively gloried in the completion of imagination and affection—and whose vision insisted that a non-fragmented Jewish totality could be its subject matter. Granted, Chagall had to make that world in the sky, because down here on earth it was terrible—but he made it whole, and Jewish, and real. It was Chagall’s courage that showed me that this avenue, calmly free of defensiveness, was a reasonable pursuit. 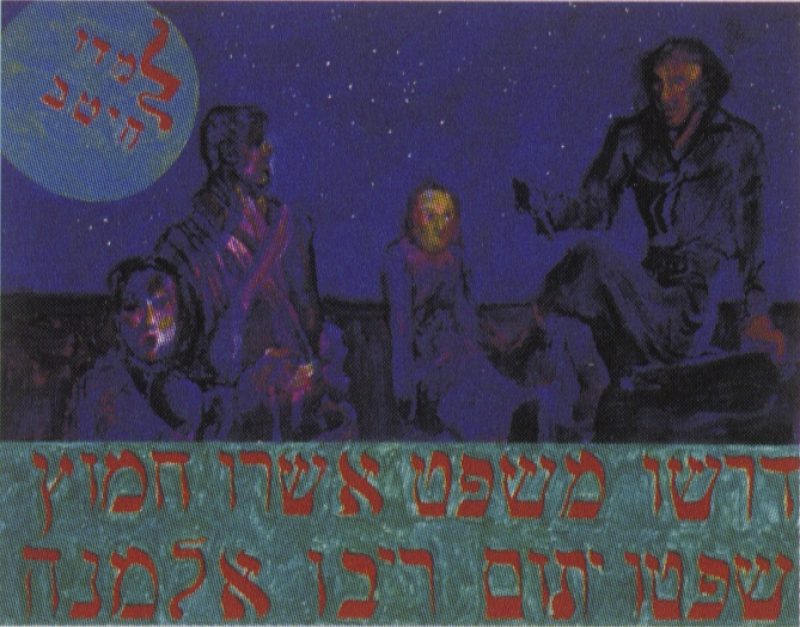 Clement Greenberg said that Jews should willingly disappear—as a strategy. It seemed to me, even at the time, that if you evaporate you are left with nothing in the exchange. I don’t feel that self-erasure is the same as self-invention, and I don’t see it as a productive means to a truth.

Cynthia Ozick surmises that what seems to be desired is that the memory of the Jews, having once existed, should be mourned, like that of the ancient Greeks, rather than being currently tolerated—a problematic organism. The art of postwar Germany has been heavily informed by this proposition. Kiefer, Polke, Baselitz, Lüpertz, et al. frequently paint from that observation post. Like Warhol, Cezanne, Picasso, and Matisse, I want to be able to acknowledge “God” and not have to refer, instead, to the “profound” or the “sublime.”

I saw Philip Guston, who admired the same metaphysical artists as Balthus, regret changing his name from Goldstein and then place Torah scrolls and magen davids into his last works. Had Philip lived he certainly would have gone deeper into this territory.

What Balthus does make clear is eye-opening: that one’s identity is a willful pastiche. That it is not so tied up in legacy as to be either obvious or inviolate. One is presented with a menu of genetic, historical, and mythic options. Some may be more topically impressed than others, but the priorities of those selections are personal—and they are based on projections of whatever the artist needs to affirm. If even one’s heritage can have its trajectory co-opted or fabricated, then what factors prohibit me from visiting an interest in the devalued visual properties available to Jewishness? As we say in Brooklyn, “You got a problem with that?”

In September 2002 I started to produce what I told myself was a Jewish “opera.” I placed blocks of scriptural fragments, each of which addresses a pivotal point in the story of the Jewish people, into each painted chapter. These scenes are arranged to tell a story, in a restructured chronology, about the rise of Israel, its internal dissolution and exile—with the last pictures reflecting on the hope of continuance.

The featured sentences were chosen to correspond with the themes of the prayers in the Amidah service (the Amidah, or Shemoneh Esreh, is the central prayer of the Jewish liturgy). There are 19 Amidah blessings and I did 19 corresponding paintings.

The comic-book format is historically comfortable being affiliated with Jewishness, as many of the pioneer comic-book artists were Jewish, most notably Will Eisner, whose startling lack of apologetics is as interesting as it is inspiring. Eisner’s descendants, the EC and DC artists and writers, along with authors of the “graphic novel,” are as varied as Stan Lee, Jules Feiffer, and Art Spiegelman. His aesthetic affiliates include Maurice Sendak and Ben Katchor. Aside from some works by Arthur Szyk, Ze’ev Raban, and A. Raymond Katz, I don’t think that Hebrew texts of this kind have been arranged before in a similar matrix.

I did not want to make paintings that were about Jewishness, I wanted to make paintings thatwere Jewish. That is, these paintings don’t indulge an unlived, imported nostalgia, and they don’t invoke a predictable iconography. By referencing specific sections of the Bible, their insistence as Jewish works goes beyond their use of typography—and as the series progressed I found that these paintings, with their opaque Hebrew texts, acquiesced, out of trust, to their allusions. Locating myself within the community, rather than repeating conventions ascribed to the community, is a form of research with which I don’t feel many painters have engaged.