Subtext: The Literature Of Rock And Roll by Susie DeFord

I’m not usually a fan of prose poetry, however Ray Gonzalez’s new book Cool Auditor (BOA Editions Ltd. 2009) has made me a believer. 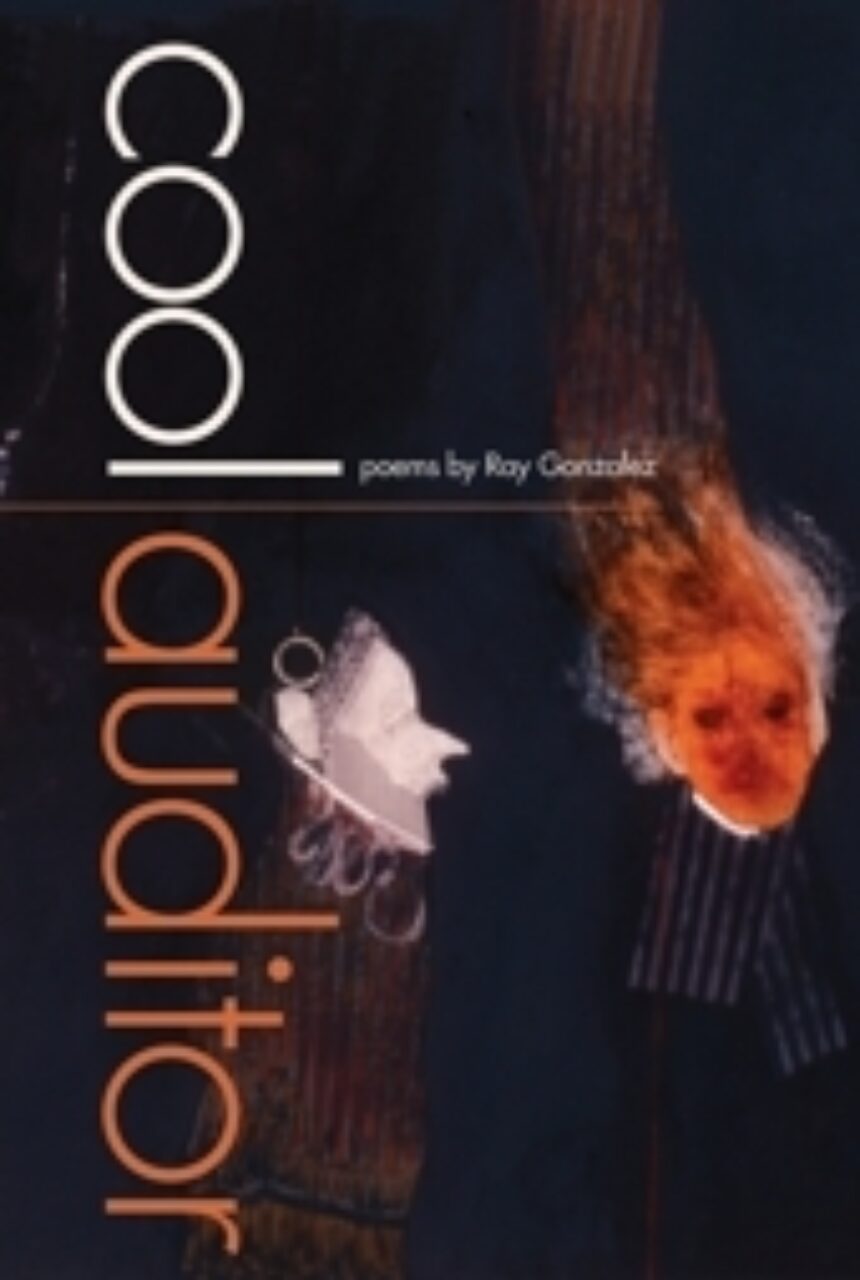 I’m not usually a fan of prose poetry, however Ray Gonzalez’s new book Cool Auditor (BOA Editions Ltd. 2009) has made me a believer. Gonzalez’s form straddles the line between poetry and prose allowing an opening for readers of both genres to enjoy his thick, musical language and fantastic imagery. His subject matter ranging from Bob Dylan to Kenneth Rexroth to his humorous, factual “Findings” poems makes for a supremely cool, fun read.

Ray Gonzalez is the author of ten books of poetry. Recent titles include Consideration of the Guitar: New and Selected Poems (2005); The Hawk Temple at Tierra Grande (2002), which won the 2003 Minnesota Book Award in Poetry; Cabato Sentora (1999); and The Heat of Arrivals (1996), winner of the 1997 PEN/Josephine Miles Book Award. He is the author of two books of nonfiction: Memory Fever (1999), a memoir about growing up in the Southwest, and The Underground Heart (2002), which received the 2003 Carr P. Collins/Texas Institute of Letters Award for the Best Book of Nonfiction. He is also the author of two books of short stories: The Ghost of John Wayne (2001) and Circling the Tortilla Dragon (2002). His poetry has appeared in the 1999, 2000, and 2003 editions of The Best American Poetry and in The Pushcart Prize: Best of Small Presses 2000. He is the editor of twelve anthologies, most recently No Boundaries: Prose Poems by 24 Poets. He has served as Poetry Editor of The Bloomsbury Review for 25 years and founded the poetry journal LUNA in 1998. He received a Lifetime Achievement Award in Literature from the Border Regional Library Association in 2003 and is a Full Professor in the MFA Creative Writing Program at the University of Minnesota in Minneapolis.

Susie DeFord Your new book Cool Auditor is a collection of prose poems. You’ve also written lined poems, essays, and short fiction. How do you decide which form to write in?

Ray Gonzalez I always write lined poems by hand in notebooks and usually begin with an image, an idea, or a fragment from entries in my notebook. I usually compose prose poems and short fiction right on the computer and they come out faster, then I go back and rework them, add information or more character development. Linear poems are a slower process and often come from what I see and I never know when they will show up. I have lots of notes and titles and scientific and historic data for strange prose poems and usually start with those ideas already there. When I first started writing short fiction in the late ’80s, many of those ideas came from failed poems or things I wanted to develop in a longer form. I guess the compromise is the prose poem that lets you combine different components of poetry and fiction.

SD You’ve also written other collections in prose Human Crying Daisies: Prose Poems (Red Hen Press 2003), and The Religion of Hands: Prose Poems and Short Fictions (University of Arizona Press 2005), and edited No Boundaries: Prose Poems by 24 American Poets (Tupelo Press 2003). Why is prose poetry such an important form to you?

RG It has given poets the freedom to focus on detail, word choice, movement, fable, perception, and scene while keeping the various aspects of poetry—rhythm, deep imagery, sound, and ideas. Prose poems allow the poet to condense the world into a tiny paragraph that contains huge worlds trying to get out. If I am writing a prose poem, I don’t have to worry about line breaks or stanzas or emphasizing certain words all by themselves. The paragraph is a form itself that does all that for me and really allows the poet and the reader to be immersed in a complete experience that justifies poetic experience, the mysteries of language, and saying it without the distraction of manipulating lines and white space.

SD Music plays a big part in your poems both linguistically and referentially. What are your thoughts on the relationship between music and poetry? Do you listen to music while you write?

RG Yes, I listen to music while I write and depend on my 34,000 song files on iTunes, though I keep holding onto my CD and vinyl collection that are very important. I became a poet from three major cultural influences when I was a kid—reading comic books, reading science fiction, and watching The Beatles’ first appearance on the Ed Sullivan Show in February of 1964. That event changed my life because they granted me the freedom to rhyme words, imitate songs, and discover the power of rock and roll in our lives. Many poets I know want to be rock stars and many rock stars want to be poets. I don’t believe both worlds are the same because poetry will never have the huge audience of rock music and the masses that live by rock everyday interpret it in a million ways.

Of course, you can say poetry readers do the same with favorite poems, but poets in the U.S. will always have small audiences and they don’t have electric guitars to redefine what lyricism is all about. I am also very interested in the isolation of the artist in our country and many of my musical heroes of the ’60s, like Jimi Hendrix, Janis Joplin, and Jim Morrison died young because their mass audiences killed them. The pressures of having millions of fans take your work and make it their own, while placing you on a dangerous pedestal, is what the rock life was all about back then. I write poems about them and about rock history because of our constant obsession with cultural gods and how we must find ways to take them apart, while we consume their art. I don’t think poets will ever find themselves in that position in this country, but many poets dream about such heights.

SD You mention the poet Kenneth Rexroth in several poems in Cool Auditor. What about him particularly inspires you? Did you ever get to meet Rexroth?

RG I never met Kenneth Rexroth, who died in 1981. His poetry about the natural world, his love poems, and his determination to find his own way in a highly political literary world is something I admire a great deal. He was not afraid to paint writers as truly human beings with major flaws often hidden by their success. He also loved language and knew the kind of commitment it takes to be a poet in this country and how to survive in it.

SD You have these “Findings” list poems that read like newspaper articles with several strange facts like “Coffee makes eyelashes of humans grow faster” and “Heart Surgeons in Chicago found eight undissolved cholesterol pills blocking a man’s heart valve…” Can you speak about these poems? Where you get all of these facts and select the ones you do for poems?

RG They are a response to the Findings section in the back of every issue of Harper’s Magazine, one of my favorite journals. They have been running those for a few years and they are filled with strange scientific data and findings and experiments scientists world-wide are pulling off. Reading that stuff made me realize there is a whole X Files/Twilight Zone aspect to our world that dominates modern science. So, again, through the freedom of the prose poem, I made my own investigations and uncovered these things in my own Findings poems and they emerged through the prose poem process.

SD How has teaching at various universities, public schools, detention houses and editing The Bloomsbury Review and other magazines influenced your own writing?

RG I learned that writing is only half the literary life. The other half is editing journals and anthologies, teaching, enlarging the audience for writing, and being a literary activist. I have done those things for 30 years and it made me see that the stereotype of the artist dwelling in solitude does not exist. Teaching is the most rewarding of these public things because I see how young writers bring new approaches to old ideas and how I still have a great deal to learn from other writers.

SD On your faculty page at the University of Minnesota it says you teach a course called “Reading as Writers: Spirituality and the Individual Writer.” Can you tell us a little about this course and how you feel spirituality plays into the writing process?

RG I haven’t taught that course in several years and replaced it with a course called “The Literature of Rock and Roll Music”, but in the spirituality class, I am interested in how language and our busy cyber-driven world combine to either amplify feelings and inner strength in an artist, or completely take them away. It comes down to whether a writer believes that writing a poem or essay or story can change people’s lives. If they can, it has to start with the creator of that writing and what he or she feels about how strong writing connects to the mysteries of being alive. All this goes beyond whatever religious beliefs or following someone might have or practice. Spirituality in writing isn’t about dogma, but about how far a poet can take his personal experience, share them with someone, and make them universal.

SD You edited After Aztian: Latino Poets in the Nineties, (David R. Godine Publishers, 1992). Who are some current Latino writers you’d like to see more with more acclaim and why?

RG Juan Felipe Herrera recently won the National Book Critic’s Circle Award in poetry and is one of our finest writers and a good friend of mine. Other fine Latino poets, who go beyond any cultural label in their work, include Michael Medrano and Rigoberto Gonzalez (not related). Daniel Chacon, down in El Paso, my hometown, is a fine fiction writer and has published a couple of novels.

SD What projects are you working on now?

RG I am always writing new poems, both linear and prose poetry, and also write a great deal of non-fiction. I published my third book of essays last year, called Renaming the Earth (University of Arizona Press) and am always researching and developing long essays. I am also trying to finish a book of writings about rock and roll music. It combines poems, stories, and essays about my favorite rock stars, about some of my desert island discs, and other adventures as a fan over the decades. I recently finished co-editing, along with Robert Shapard and James Thomas, an anthology called Sudden Fiction Latino: Short Short Stories From the U.S. and Latin America. It is their latest volume in their Sudden Fiction series and will be out in March of 2010.

Cool Auditor is out from B.O.A Editions.