In this week’s Subtext, Susie DeFord talks to philosopher-poet John Koethe about the intermesh of poetry and philosophy, commissioned poems, and meeting poetry idols. 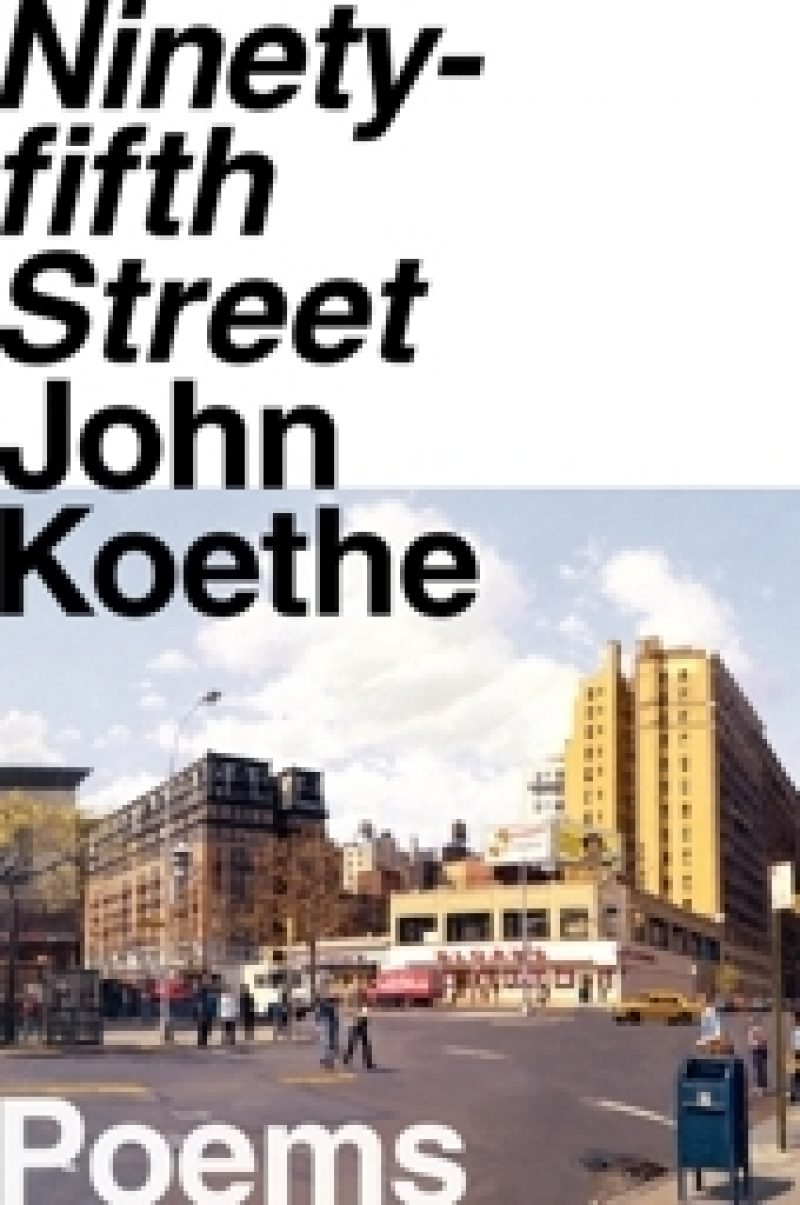 A few months ago I ran up to The Poetry Project to hear a poet I’d recently interviewed, Joanna Fuhrman, read. I was unfamiliar with the poet she was reading with, John Koethe. I go to a lot of readings and most, I have to say, go on too long and I just want them to be over. I’m so glad I went to this reading though. I couldn’t get enough of John Koethe’s effortless, narrative verse. He’s one of those writers that makes me fall in love with poetry all over again. His down-to-earth elegant poems tell introspective life stories with humor and a philosophical twist. One of my favorites that he read, Joanna Fuhrman, tells the tale of his young starry-eyed meeting and hanging out with the “Holy Trinity” John Ashbery, Kenneth Koch, and Frank O’Hara in New York in the 60’s.

John Koethe is the author of eight books of poetry, most recently Ninety-fifth Street (Harper Perennial 2009), as well as philosophical books on Wittgenstein and skepticism, and a book of literary essays. Koethe received the Kingsley Tufts Award for Falling Water (1997), the Frank O’Hara Award for Domes (1973), and the Bernard F. Connors Award. His poetry has been included in several appeared in The Paris Review, Poetry, and The Best American Poetry. He has been granted fellowships from the Guggenheim Foundation and the National Endowment for the Arts. He has also received a lifetime achievement award from the Council for Wisconsin Writers. He recently retired as Distinguished Professor of Philosophy at the University of Wisconsin-Milwaukee. He is currently the 2010 Bain-Swiggett Professor of Poetry at Princeton University.

Susie DeFord In the poem Belmont Park you had a line that actually made me laugh out loud “I don’t care for poetry readings—I never get the poems.” Few poets are honest enough to admit the duality of loving yet sometimes feeling ambivalent towards their craft. Will you tell us more about your thoughts on this topic?

John Koethe Actually, I do sometimes enjoy poetry readings. But the poetry I write and like to read comes across better when read silently rather than aloud—it exists in a private, individual space, rather than the public one of a poetry reading. And the look and feel of the poem on the page is important to me too.

SD You’re a Distinguished Professor of Philosophy at the University of Wisconsin-Milwaukee and many of your poems like On Happiness have a philosophical quality to them while still remaining very accessible and down to earth. How do you see the intersection between philosophy and poetry?

JK The background to On Happiness is this: a few years ago I received an invitation to comments of Susan Wolf’s Tanner Lectures on Human Value at Princeton (apparently they wanted a philosopher who also knew something about poetry or some other art). The topic of her lectures was Meaning in Life and Why it Matters (they have just been published, along with the comments, by Princeton University Press). It was the time of year when I work on poetry rather than philosophy, but I couldn’t help starting to think a bit about what I’d say, so I decided to incorporate some of those thoughts into the poem I was starting to write. But with one recent exception, I never or rarely write “philosophical” poems (there’s a poem of mine, Moore’s Paradox, in The Oxford Book of American Poetry that begins with “I don’t like poems about philosophy, but then/What is it?”). But I do think poetry and philosophy spring from some of the same sources. Both can involve abstract speculation about things like time, the nature of experience, the self and its relation to the world, and so on. It’s just that philosophy is subject to constraints and disciplines that poetry is free of.

SD You have several Berlin poems in this collection and thanked the American Academy in Berlin for a fellowship. How did that come about, how long were you in Berlin, and will you tell us about your time there?

JK I was invited to apply for a fellowship at the American Academy, and spent six months there in 2005. It was a wonderful experience—you get an apartment in a villa on a lake outside of Berlin, a generous stipend, and wonderful meals. I was simply there to write poetry, and since I tend to write in the morning and then again before and after dinner, that left most of the day free to explore Berlin, which was reflected in the poems I wrote while I was there.

SD What lead you to travel to and write the poem This is Lagos?

JK That didn’t involve any travel—I’ve never been to Africa—but was inspired by an article on Lagos by George Packer that appeared in The New Yorker. It was quite horrifying, and I found myself drawing on it for one of the kind of political poems I sometimes write. I also read a review of a book about the Crow Indians by the philosopher Jonathan Lear around the same time, and some of that is reflected in the second stanza of the poem.

SD New York’s Port authority invited you to write a poem for the 400th anniversary of Henry Hudson’s discovery of the port of New York. What was it like to be asked to write and present a poem in this way?

JK Well, it was gratifying to be in the company of the other six poets, all of whom were much more famous than I am. I’d never written a poem to order, as it were, and wasn’t sure I could do it, but I remembered the lines about the Dutch sailors at the end of The Great Gatsby, my favorite novel, and decided to use them as an epigraph and go from there. It turned out to be much easier to write than I’d expected, and I even began to remember a few things about Henry Hudson.

SD Your poem Ninety-fifth Street talks about meeting and becoming friends with John Ashbery, Kenneth Koch, and Frank O’Hara back in the 60’s in New York. Will you tell us a little more about that time and how your relationships with these other poets helped you as a writer?

JK Well, it was very exciting, since those three poets were the idols, so to speak, of mine and of my poetry friends. I didn’t get to know O’Hara, since he was killed not long after the dinner I wrote about in the poem, and I didn’t really get to know Koch better until later on, but Ashbery and I became and have remained good friends. The fact that he liked my poetry was encouraging, and I think helped me get away from trying to write “Ashberyian” poems.