I was immediately drawn to Lynn Emanuel’s latest book of poetry Noose and Hook because of the bright yellow cover with a picture of a barking dog on it. 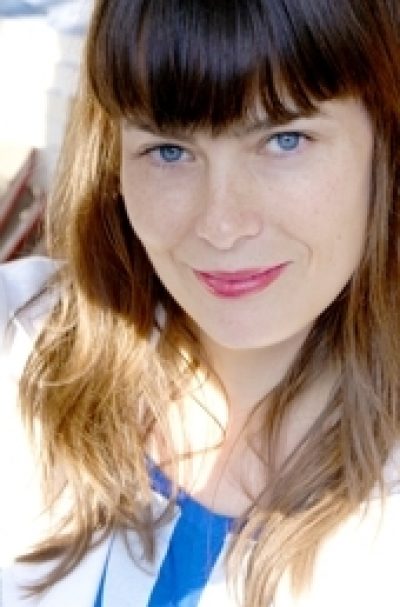 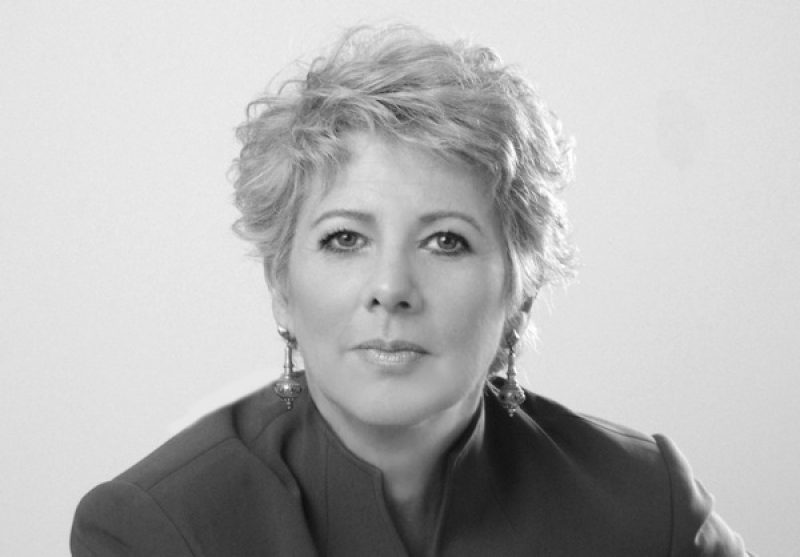 I was immediately drawn to Lynn Emanuel’s latest book of poetry Noose and Hook because of the bright yellow cover with a picture of a barking dog on it. The cover, and the fact that it was published by University of Pittsburgh Press which has consistently put out smart poetry collections since 1936 by authors such as Denise Duhamel, Barbara Hamby, and Billy Collins. Noose and Hook is no exception to Pittsburgh’s stellar catalog. Emanuel’s elegant, wry verse tackles a multitude of subjects—place, wars, painting, teaching, and dogs. Her language is precise, innovative, and witty, yet still has heart and a playful quality to it. Pittsburgh clearly has more going for it than some other big cities and is lucky to have Emanuel as one of its poets in residence.

Lynn Emanuel is the author of three previous books of poetry, Hotel Fiesta, The Dig, Then, Suddenly&, which was awarded the Eric Matthieu King Award from The Academy of American Poets. Her work has been featured in the Pushcart Prize Anthology and Best American Poetry numerous times and is included in The Oxford Book of American Poetry. She is the recipient of two fellowships from the National Endowment for the Arts and has been a winner of the National Poetry Series. Currently, she is a Professor of English at the University of Pittsburgh where she directs the Pittsburgh Contemporary Writers Series.

Susie DeFord In the past you’ve been described as a Noir Poet. Although your work is still sharp and precise, this book feels lighter and more playful, especially in “Part Two. The Mongrelogues: Two Acts.” Can you speak about how you feel your poetic voice has grown and changed over your writing career?

Lynn Emanuel I think early on I was inspired by the idioms of the places where I grew up—which were very different from one another: Colorado, Nevada, and New York City. To me, these idioms were all about social class. My voice is always, in one way or another, about money: who has it, who doesn’t—which, not incidentally, is frequently one of the subjects of film noir. Money is not only the subject of my work, I feel it is the sound of my work. In my second book, The Dig, I tried to reproduce the voices of my mother’s family—their distrust of middle class values (even though they were middle class) and their ferocity. I invented an idiom for the dog in “The Mongrelogues” because I needed a voice that would register intelligence-inside-poverty. I’m not sure I can describe how much or in what ways the voices in my books have changed over the years, but the motive behind the voice has remained constant.

SD Dogs pop up a lot in Noose and Hook in “Mongrelogues” and other poems scattered through out, will you tell us more about this?

LE I started writing ”The Mongrelogues” when I was a visiting writer in the MFA program at the University of Alabama in Tuscaloosa. I’d never lived in the southeast, and I felt I had crossed into another country. Everything was different. The heat was like God himself. The vegetation and the insects thrived there, the beetles were as big as seahorses, and the minute I opened my mouth I was the Yankee “other.” I found myself without a voice. I felt utterly inarticulate. Because I was living in a house reserved for the annual visiting writers, I had access to a weird library of books assembled from whatever anyone had been reading and had left behind. I found a copy of Archie and Mehitable, which, as you may or may not know, is a collection of poems written by the newspaper columnist, Don Marquis, in the voices of a cockroach and an alley cat. In it, I found a way out: I might not have had a human voice, but I could bark and whine, and so I did. I entered the character of Dogg and stayed there for months. By the way, if you read Berryman’s Dream Songs in the context of Archie and Mehitable you’ll see a big influence.

SD The poem “I told my student Kimber Lester, if you cannot actually write” discusses your relationship with the students you’ve taught over the years. How has teaching helped or hurt your own work? What are some tricks or prompts you use and teach when you’re having trouble writing?

LE A professor of mine at Iowa once said that teaching was like being permanently hooked up to a blood machine. I love to teach and I’m good at it but, if you teach (and don’t just preside over a workshop like a visiting potentate) it is hard work. It is labor, the way many of us earn a living. One thing we don’t often write about. I wanted to give a portrait of a certain group of students: their tats, piercings, beauty, despair, anger, intelligence. I didn’t want to sentimentalize them—or myself, for that matter. Throughout the poem I wanted to riff on that old saw “show don’t tell.” The implication being: demanding that any of us show our lives to one another is possibly a form of violation and invasion—that it is also possibly a form of art does not alter that fact. I don’t know if I have any tricks or prompts that are mine alone—I steal from all my friends—but “show don’t tell” is something I try not to say either to my students or to myself.

SD You studied with Adrienne Rich in college. How did working with her influence you?

LE This is a difficult question to address. I was studying with Adrienne at City College in New York the year Diving Into The Wreck was published and when she came out as a lesbian feminist. Diving Into The Wreck was received by much of the women’s community (certainly in New York City) as the proto second-wave feminist text. As for Adrienne’s political position, she was both lionized and castigated. I think this is an historical moment that hasn’t yet been adequately written about. What is overlooked is the degree to which the gay New York literary world turned against Adrienne, whether from fear or merely embarrassment. Whatever it was, her declaration of sexual identity was, in my reading of the situation, an inconvenience for these writers, and their treatment of her was harsh. Watching her struggle with the adulation and the censure was a potent lesson for a young woman who wrote. Writing poetry was an audacious and perilous activity; it was not to be undertaken lightly.Perhaps this is another reason I don’t demand that my students tell about their lives in poems without thinking hard about the politics of that demand.

SD What other poets have you worked with and how have they influenced you?

LE One summer, when I was living in New York, I took a workshop with Diane Wakoski in her tiny apartment on the Lower East Side or in the Village, I can’t recall which. Her poetry influenced me greatly when I was younger, especially the way in which it worked with image. I wasn’t a very good poet at the time. When the workshop ended, if I’m remembering correctly, she had conferences with each student. I do remember her saying to me, “Your sense of melodrama will always get you through.”

SD You have a poem about Baudelaire in this collection. When did you first read Baudelaire? What was your first reaction and how do you relate to him personally and professionally?

LE I can’t remember a pre-Baudelaire life. I feel I came out of the womb having read Baudelaire. Of all the poets I love, he seems the closest to me in sensibility. Among the things that I adore about him is the way in which he inhabits a landscape that is often read as “feminine.” No one writes about furniture, curtains, and dresses like Baudelaire. In his work such things become monumental. A dress to Baudelaire is as majestic as a mountain range to another poet. He made the parlor into a city and the house–an interior, domestic space—into a country. Another French writer of whom I am fond is the phenomenologist, Gaston Bachelard. His book, The Poetics of Space, is in conversation with Baudelaire, and Bachelard, too, expands interior space and the activity of housekeeping into an almost heroic landscape and action. And, of course, so did Alexander Pope, another writer whom I love.

SD In “These days, Ou sont les neiges d’antan? I often wonder” you discuss painters. On Poets.org you have a poem called Homage to Sharon Stone. Visual art and film seem to come up in your work a lot. How do you think poetry relates to these other art forms?

LE I suppose film and the visual arts have been to me what, say, video games are to my students. Growing up I would not “see” films, I would devour them, I would infiltrate and become them. I think that noir films’ gloomy, corrupt, paranoid worlds seemed more accurate to my experience and my life than my life did. Film provided a shadow world in which I participated with relish. It may well be that its “alternate reality” and my ability to access it inspired me to write poetry. I don’t think one gets to choose one’s influences. I was first more profoundly effected by film and painting (my father was a painter) than by poetry. Early on in my life, I was a better reader of film and the visual arts than I was of poetry, which, actually, made me feel somewhat awkward. I had to learn to translate my affection for film and painting into an affection for poetry and to transpose the way I read them into a way to read it.

SD What’s next for Lynn Emanuel?

LE I don’t know. For me Noose and Hook is an end run around silence and not-writing. My own feeling is that it is a Giacometti-esque book—something both skeletal and lyrical. I felt the book shrink down to the minimum. I said only what was necessary to say, not one poem more. My next book isn’t really something I have planned for. I’m just going to put my head down and try to make a break for it.