Charlie Smith has written nine books of poetry and six novels. This month’s Three Delays marks his first work of fiction in more than a decade. Hopscotching through decades and cities, from Venice to Istanbul to the porches of West Miami, Smith’s great adventure evades succinct or satisfying description. 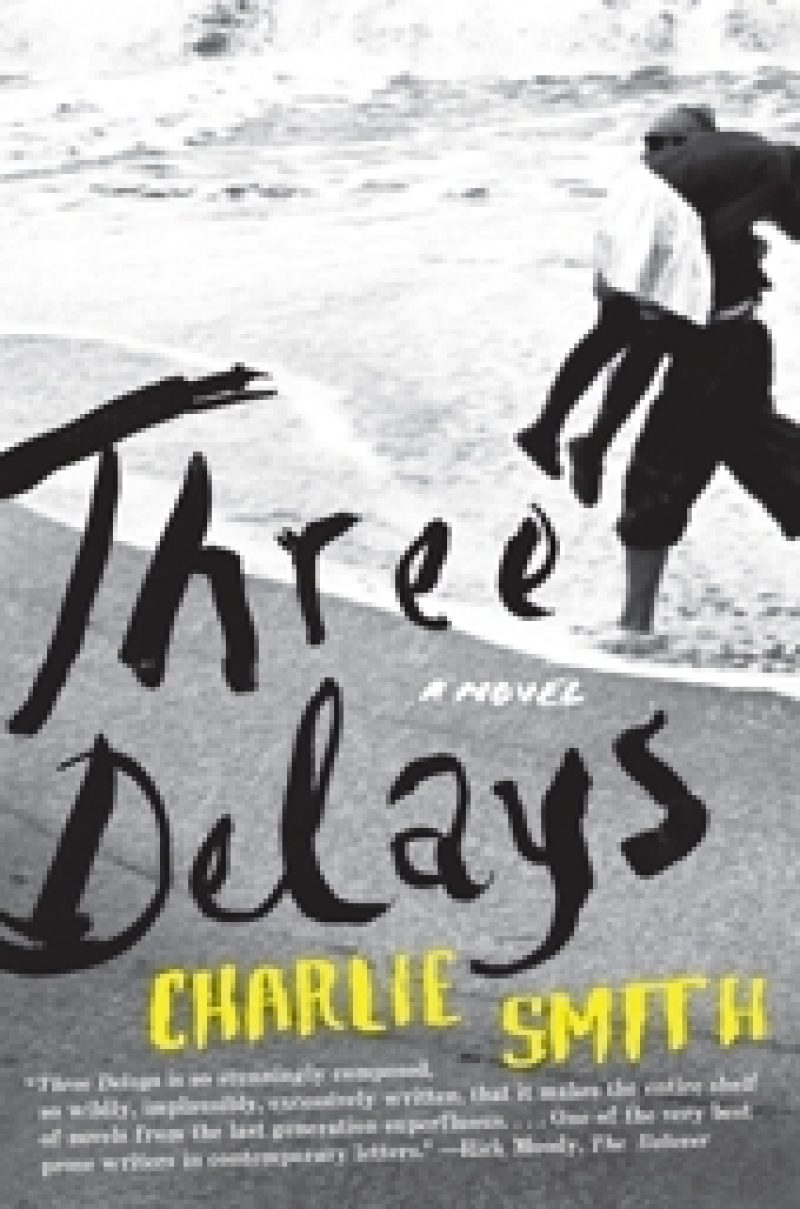 Charlie Smith has written nine books of poetry and six novels. This month’s Three Delays marks his first work of fiction in more than a decade. Chaotic, dense, surprising, and deeply funny, Three Delays is the story of Billy and Alice, doomed and fated lovers who can’t stay together or apart. Hopscotching through decades and cities, from Venice to Istanbul to the porches of West Miami, Smith’s great adventure evades succinct or satisfying description. In fact, my feeling as I approached the book’s last pages was something like total exhaustion, as I became entirely immersed in and overwhelmed by the complexity and richness of the novel’s world. I was a convert to the church of Charlie Smith, left speechless by his work . After speaking with Smith on the phone—me in still-chilly Toronto, he in the balmy Florida Keys—I suspect the effect is intended.

Emily Testa I hear this book took quite a few years to write.

Charlie Smith I wrote the first two chapters in ‘98, then came back to it later. I was working on several other projects in between. Sorry, I’m a bit spaced out right now. I’ve got breakbone fever. Not sure if you’re familiar.

CS It’s an African blood fever, and it makes you woozy and strange. Anyway, I put the story aside for at least two years while I was teaching at the University of Alabama. When I returned to it in 2000, I didn’t seem to get anywhere. So I began to work on an ancillary or at least collateral version, but it didn’t completely work out either. Then a couple of years ago I looked at all the various novellas and chapters I had written, and there was a line moving through it, joining it together, and what it made was worth its salt as a book. It was like putting fish on a string.

ET I asked because I can’t imagine how this book could be written quickly. It’s very conversational, in a way, and then there’s this other element—this dense, sermon-like quality that’s easy to copy badly and nearly impossible to do well.

CS I knew what I was interested in from the beginning—the strange love between two characters. And the book, in terms of the actual sitting at the desk and writing it, did not take so long. Some novelists rewrite, some go in sprints.

ET Which kind are you?

CS I don’t usually revise. My process is like boarding a submarine and sinking down to the bottom of the ocean. It’s the only place you live and the only thing you’re up to. Otherwise, what passes as novel is really just cleverness. Lately there’s a whole crop of novels that aren’t novels at all. You’ve got to bring a kind of concentration to bear. When I’m writing I eliminate nearly everything else in my life, as do most serious writers of any kind. I’m in Key West right at the moment, where I’ve been for the last year, and I’ll admit it helps to be free of heavy winter.

ET At the Norton reading last summer, you said, “When I write a poem all I’m able to figure out is the words, and write them down.” Do you feel the same way about novel writing?

CS When I write, I’m just thinking. It’s an imaginative willingness, a house filled wth doors and you’ve got to open one or another. You don’t have to figure anything out—that’s for journalists and pastichers. Novel writing is an imaginative act strung out over a time frame, not a matter of rhetoric or strategy or intelligence. Some writers might feel they need to know the end of the journey before they get there. I’m not that kind. I just set out to do it, and if I have given myself fully enough to the characters and their situation–their heartbreak, their love—things will just come up that are interesting to me.

ET Do you find yourself reflecting your experience through whole characters in your writing? That is, would you ever set out to write by casting yourself as, say, Billy, and remembering or collaging together an Alice, or a Henry?

CS I write about what’s interesting to me. But I am drawn to things like powerful emotion and emotional honesty. You can look at what I write in superficial ways—maybe the subjectivity in Three Delays is an artifact of the characters’ drug use, for instance—but if you look deeper you can see it’s honest.

ET For me, your writing conveys an emotional core that I completely believe in.

CS I don’t do research. I just let the characters fire away. As a novelist, you start with the gift and the drive, then you need to know how to go about it in your own particular way. We all tend to be scared to death of things we cant anticipate and have no power over, which makes art-making difficult because it requires you to open up to what you don’t know. I don’t know anything about the world my characters come from—I’m a New England prep school graduate, not a boy preacher from West Miami. The people of South Florida might say “Miami nothing’s like that!” But I’m creating my own Miami, just like I created my own Hollywood for another novel I wrote, without ever having been there. My job is to make it alive to the reader—it’s not a factual paradigm, not a road map to find the way to the house of so-and-so. I’m a writer, not a scientist. I’m not interested in broad factual reality. I’m interested in stories of the heart. It’s true that love stories do all come to bad ends, though. Somebody either leaves or dies.

ET Can you describe your feelings about plot?

CS I don’t think I could even tell you what plot is. It’s a story, and it’s spurred by the feeling of being grabbed by lapels and knowing this is a story I should tell. Stories are simple. There aren’t that many, really. Somebody comes to visit. Somebody goes on a trip. There’s a love affair or deep love between two people. And though I tell stories in a way that’s drawn from life, it’s not really life. I’m under an obligation as a writer to make it interesting, to deepen the character or move the story along. Everything else is extraneous. I have to keep that in mind, especially with the book I’m writing now, which is 300,000 words. I have to comb out little sidebar treks, rake them out, just have to be cold and willing enough to do that. Some would say I haven’t done it enough, especially in my early novels. But no matter what, there should be a progressive deepening of characters, so that by the end whatever happens has power and it seems as if there was a plot, but there wasn’t—there was only a story.

Charlie Smith has written nine books of poetry and six novels. This month’s Three Delays marks his first work of fiction in more than a decade.