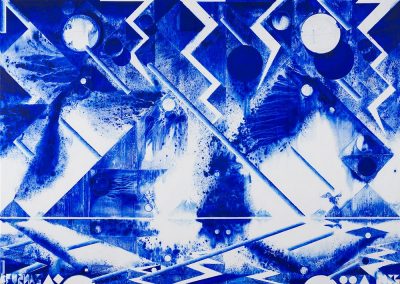 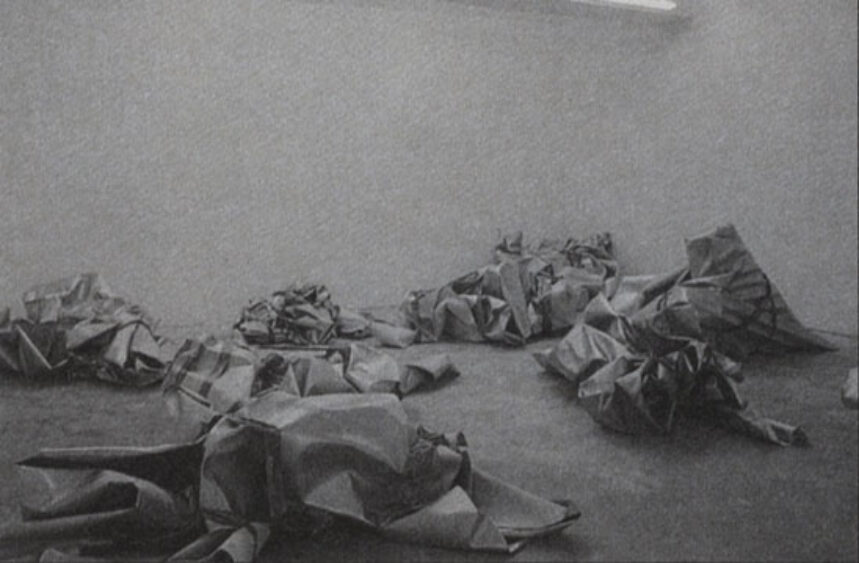 Steven Parrino, Aluminum Clouds (Crush), for Drella (by the way, kiss my ass you wigged corpse) or Lost Hope and the End of Painting, 1996, aluminum paint on canvas, installation Le Consortium, Dijon, France.

Blob Fuckhead Bubblegum, a big ball of pink painted canvas (100 yards) tightened with duct tape, and Aluminum Clouds (Crush), for Drella (by the way, kiss my ass you wigged corpse) or Lost Hope and the End of Painting, which consists of a number of small bundles of silver painted canvas also held together with duct tape, seem to be an appropriate response to today’s confusing pluralism in the arts. Painted monochrome canvases unattached and rolled into bundles clenched with tape—look like what you would do if you wanted to throw away some large, failed paintings. Of course Steven Parrino didn’t get rid of them, he is showing them.

By taking his paintings off the stretcher, rolling them into balls, and putting them onto the floor, he is redefining a debate on the conventions of painting and that affair of the integrity of the picture plane. By destroying the surface and the shape of his canvases, he makes his paintings become a kind of sculpture, or more exactly something that is “neither painting nor sculpture.” Because of the radicality of his gesture, he also sends the old debate about flatness or the problem of the canvas’s outer edge to the dustbin of history.

We know that painting will not die (Philip Taaffe) or that it already died and we can’t get rid of its corpse (Sherrie Levine); Parrino himself poses the situation: “Why not engage in some necrophilia?”

Of course, unstretched material has been seen before (antiform, Support-Surface, Sam Gilliam, and others), but here the violent and aggressive dislocation of the picture seems to mark for painting something close to the end of the road. Maybe the only way you can pay attention to the surface of the picture is by destroying it (“Everybody kills the thing he loves”).

Parrino’s aggressivity in his work and his titles should be welcomed at a time when contemporary art is attacked, directly (by certain members of the Congress and Senate) or indirectly (The New York Times, “The Jabberwocky of Art Criticism,” Sunday, October 23, 1995). Of course what is really under attack is precisely those progressive attitudes like Parrino’s that tend to question the nature of art. 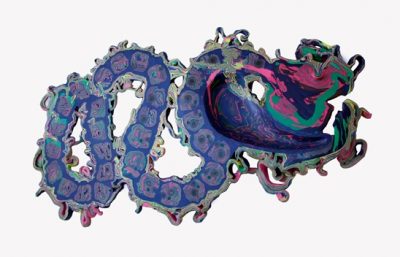