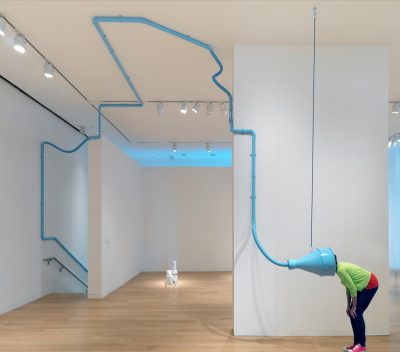 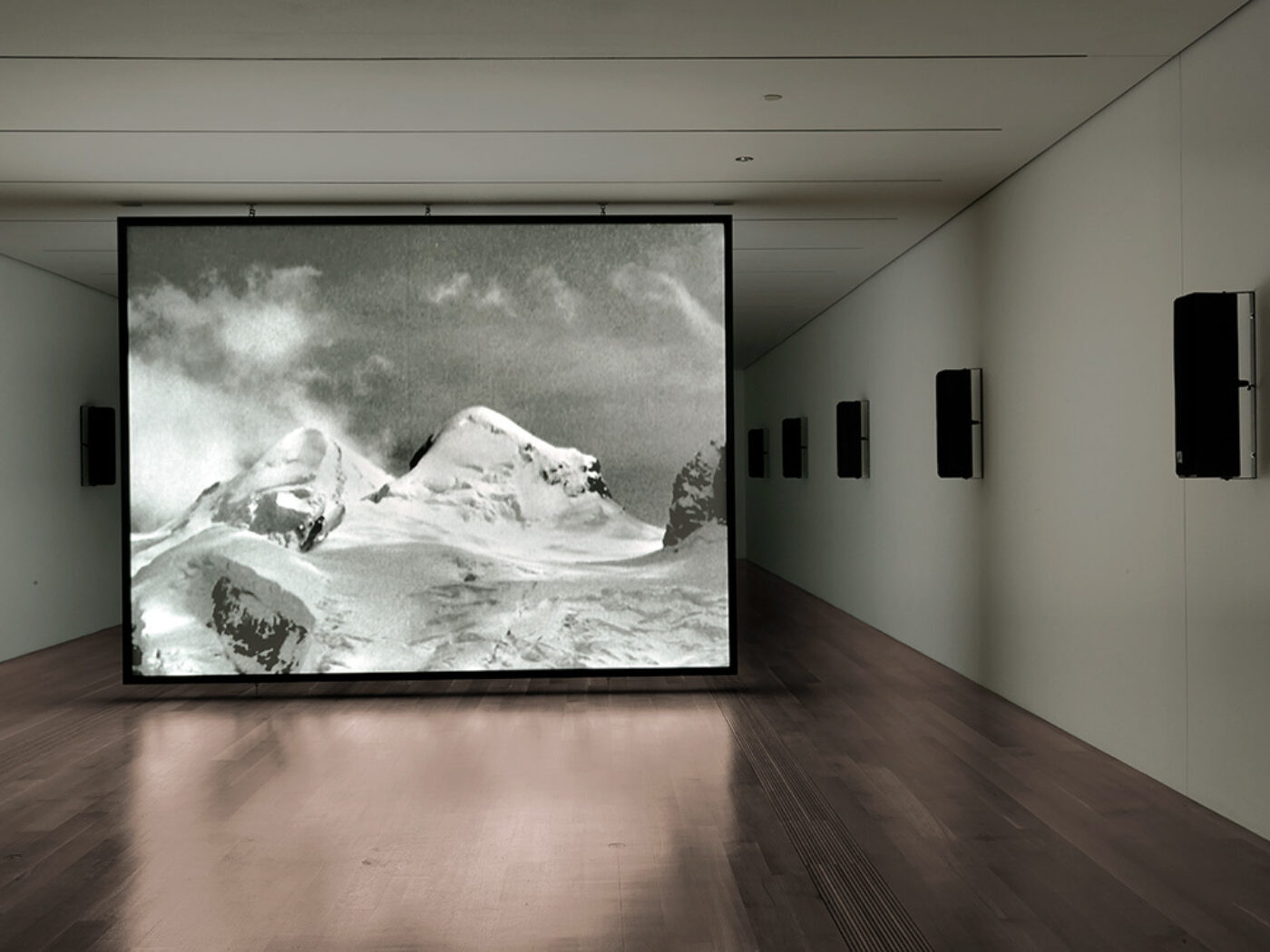 Whether heard intoning an aria under a bridge in Münster, singing the Vaselines at a bus station in Belfast, or capturing the condensation of her breath on glass, Susan Philipsz brings a heightened intimacy and attention to the environments her work inhabits. In her exhibition Seven Tears, currently on view at the Pulitzer Arts Foundation and curated by Stephanie Weissberg, Philipsz punctuates the Tadao Ando-designed space with seven elegiac works processionally paced throughout its main galleries, water court, entranceway, and liminal passages. The exhibition spans almost twenty-five years of her career, yet maintains an active engagement with its immediate institutional context and architecture, along with far-reaching historical references and the backdrop of climate crises and recent flooding in the exhibition’s host city of St. Louis.

The discourse around Philipsz’s art often maintains a tension between her reputation as a foundational sound artist and an insistence that the work exceeds this category through connections to sculpture, architecture, and performance. Philipsz brings a continuation of life to the spaces she inhabits—a fluid composition of urgent presents and historical artifacts mediated through the human voice and the body as both resonator and listener.

James McAnally Though not quite a retrospective, Seven Tears offers both a pacing of works made for the gallery and public commissions drawn from the past twenty-plus years. How did you bring these two strains of your practice together for this exhibition?

Susan Philipsz When working within institutions, I still treat those spaces in the same way as I would treat any public space by considering the acoustics, the architecture, the history—all the things that shape the experience. For this show, as you enter the Pulitzer from the street, we mounted a loudspeaker playing The River Cycle III (2010) in which I sing “Pyramid Song” by Radiohead, whose lyrics set the tone: “I jumped in the river, what did I see? / Black-eyed angels swam with me.” The River Cycle III comes out of some of my earliest work with sound when I would infiltrate existing PA systems in the supermarket or bus station with my voice. It comes on intermittently, and it’s clearly an untrained voice; it could be anyone’s voice.

It’s very intimate and creates a feeling of solitude and time passing, but then everyone is having this collective experience, and you become extremely aware of your environment, such as the person you’re standing beside in the queue in the supermarket and the surrounding architecture, or other things you might not notice. With these sound pieces, you were all of a sudden engaged, so it creates a tension, an intimacy—a private moment in a public space. 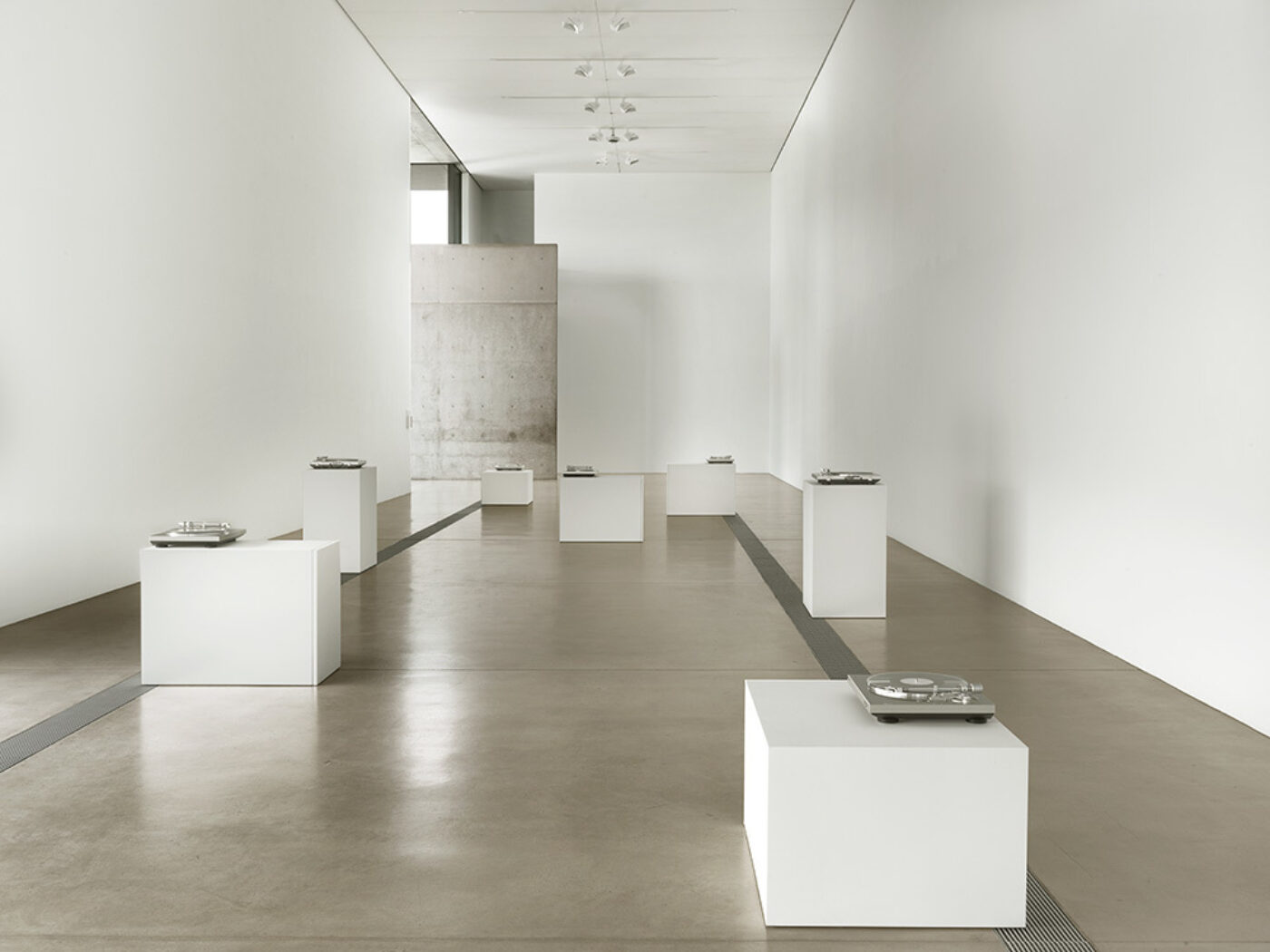 JM Sound carries such different conditions in public space because it comes uninvited. Even physically, it’s almost impossible to avoid a sound in a public space, and it comes to listeners without them completely agreeing to the terms.

SP You also can’t help but respond to it, you know? In public spaces especially, where I can make these interjections into the space, it can momentarily alter your sense of yourself, and your senses are heightened.

JM Though this show is housed within the Pulitzer’s indoor and immediate outdoor spaces, you are addressing the city in some direct ways, in particular through the lens of the river, water, and loss. Was that informed by St. Louis’s geography as a confluence of three major rivers and their recent flooding, or was it more of a running thematic within your work?

SP Many of the works existed previously, but the first place we went to when we came for the site visit was to see the confluence of the Mississippi and the Missouri. This did have an influence when I was thinking about which works to include in the show. All the works have a sort of flow, but it’s also dealing with themes of loss and absence. There is a lament throughout.

JM Starting really with the eponymous work, Seven Tears (2016), which frames the show in many ways.

SP I made several works in response to John Dowland’s Lachrimae (1604) composition. Dowland was a composer during the Elizabethan era, which was extremely melancholic. He wrote a piece called Lachrimae, or Seaven Teares, which consisted of seven variations on the theme of a single fallen tear. Each Lachrimae was slightly different than the next. For my version of Seven Tears, I recorded each of the tones from the rubbing of a wine glass and then had them transposed onto clear vinyl, which reflected the physical process of rubbing the rim. It’s like pooled water. I made these—I don’t know whether to call them paintings or prints because they are painted canvas prints—with each of the Lacrimae titles: “Lachrimae Antiquae,” “Lachrimae Gementes, or Forced Tears,” “Lover’s Tears,” “Tears Renewed,” “Old Tears,” and so on with the seven different tears represented. It’s so strange because if you examine a tear under a microscope, a tear of sorrow looks different from the tear if you are crying because you’re chopping an onion. Each has a completely different embodiment. 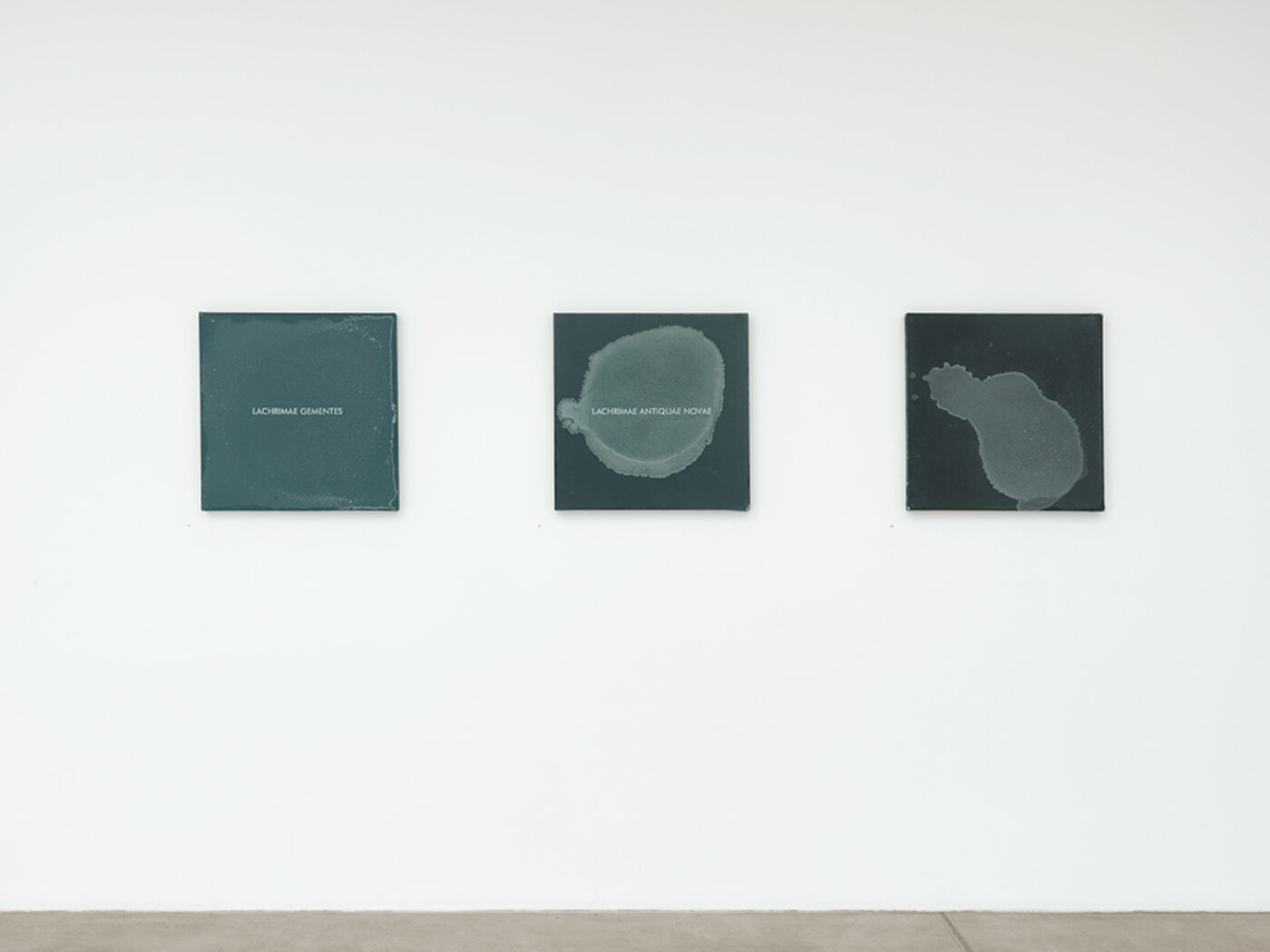 JM This sense of melancholy or mourning, especially in relation to water, really peaks with White Flood (2019). The found footage of glaciers collapsing with the twelve-channel sound is an elegiac and urgent endnote to the show. It has a profound relationship to our current moment of climate collapse. How much has that immediate environmental anxiety affected the understanding of the work?

SP The first thing you think about with that piece is definitely climate change, but that was never the intention of the filmmakers that collected these frontier films in the 1940s. They were making a nature film about the life of the glacier. Of course, they didn’t know anything about climate change then, but you can’t help but read it that way now. In relation to the other works in the show, by the time you get down to White Flood you’ve gone through Seven Tears, The River Cycle III, and the Lacrimae painting/prints (2017). These are all dealing with those things indirectly, which really colors your perception—the flooding, and the glaciers melting, and climate change all together.

JM Was that an initial inspiration for you when you saw the footage and heard the score? What was your entry point to the material?

SP My interest in the film’s composer, Hanns Eisler, led me to the footage. Eisler’s story is super interesting to me because he was the first musician to be brought in front of the House of Un-American Activities due to his political work. There are more of these themes of isolation, displacement, and separation as part of Eisler’s story as well in that he had to flee Nazi Germany and then  appeared before the House of Un-American Activities. He escaped for safety and was then persecuted in America and displaced again. This background is in the physical making of the work when I isolate the tones for each speaker. You hear each of the tones individually—the sound of the instrument itself rather than the whole. Or you can hear it in different ways. It depends on where you’re standing. If you’re standing next to the speaker, you really do hear the string and the physicality of the musician as he draws his arm across the string with his bow. You even hear the creak of the instrument. All of these elements in it are separate, alone. In a way it’s like an all-over painting. It’s very democratic. Every tone gets a voice, gets represented. 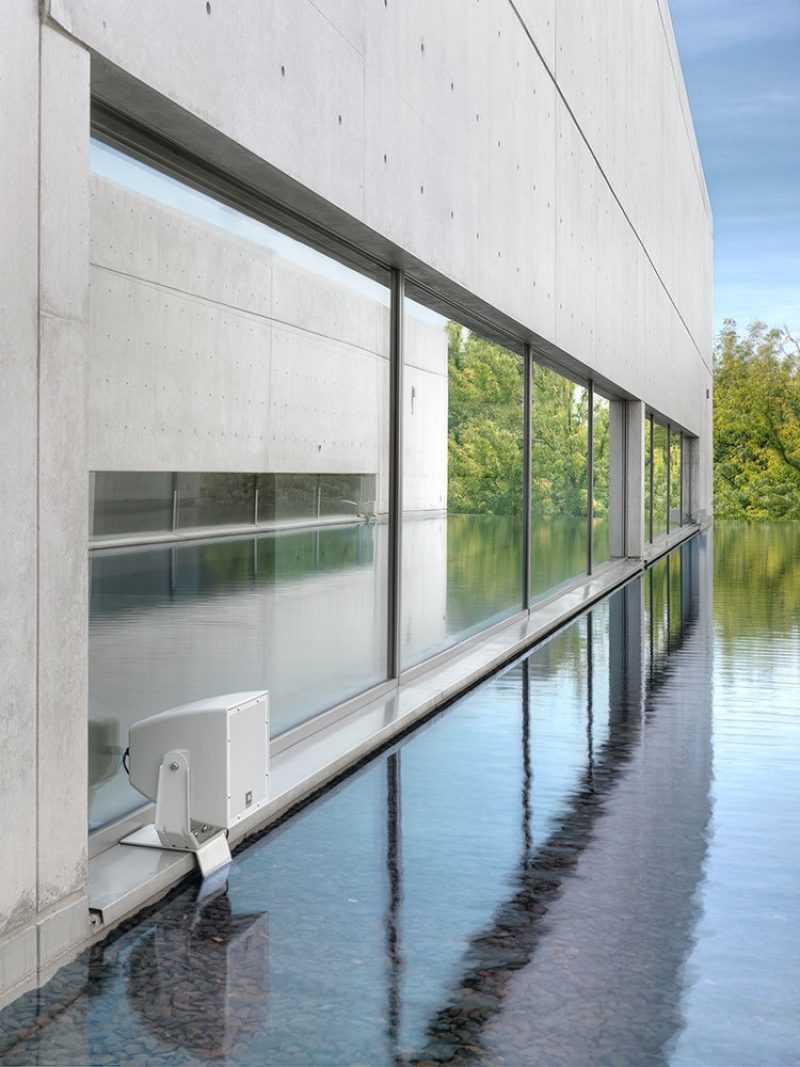 JM It’s interesting that you frame this piece in terms of it being democratic and bringing these elements together holistically. Eisler’s twelve-tone serialism is in dialogue with that element, but a lot of your work pulls out single tones, or individual breaths, or voices. I initially heard that as a gesture toward isolation or dissolution. The work maintains a balance between this idea of the all-over painting or equal representation of the tones as democratic versus the disintegration that seems to be an inherent part of that tactic.

There’s a similar approach in Too Much I Once Lamented (2019), your new commission for the Pulitzer’s water court. The piece adapts a madrigal that you isolate so that a listener can hear the breaths and awkward pauses natural to the human voice.

SP I was immediately drawn to the water court after visiting the Pulitzer early on. I wanted to really work with the architecture of the building and the acoustics and create an immersive experience in which you’re projected into the water and beyond because you have this infinity pool in the middle of the city, and then you see the sky and the trees reflected. The work changes with the scale of this space. It is intimate, but also continues out into the surrounding neighborhood. I wanted to project that sense of endlessness.

Susan Philipsz: Seven Tears is on view at the Pulitzer Art Foundation in St. Louis until February 2.

James McAnally is the co-founder and executive director of The Luminary, a platform for art, thought, and action based in St. Louis, MO. McAnally is also the co-founder and editor of Temporary Art Review, a platform for contemporary art criticism that focuses on artist-run and alternative spaces, and serves on the board of Common Field, a national network of artist organizations and organizers. His writing has appeared in Art in America, Art Journal, Terremoto, Hyperallergic, and OEI, among many others, and his publications are in the collections of the Museum of Modern Art, Smithsonian Museum of American Art, Los Angeles County Museum of Art, and School of the Art Institute of Chicago. McAnally is a 2016 recipient of the Creative Capital | Andy Warhol Foundation Arts Writers Grant for Short-Form Writing.

The Space of Music: Carl Craig Interviewed by Joe Bucciero 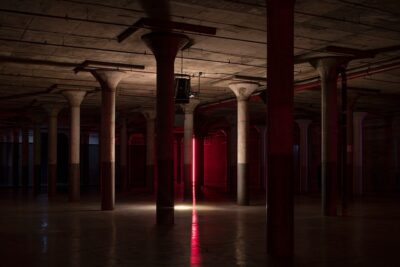 Bringing techno into the museum.