So Much to Listen To by John Ruscher

In No Such Thing as Silence: John Cage’s 4’33”, Kyle Gann tackles the experimental composer’s infamous “silent piece” with superb knowledge and skill. Gann happily answered my inquiries via email from Belgrade. Read on… 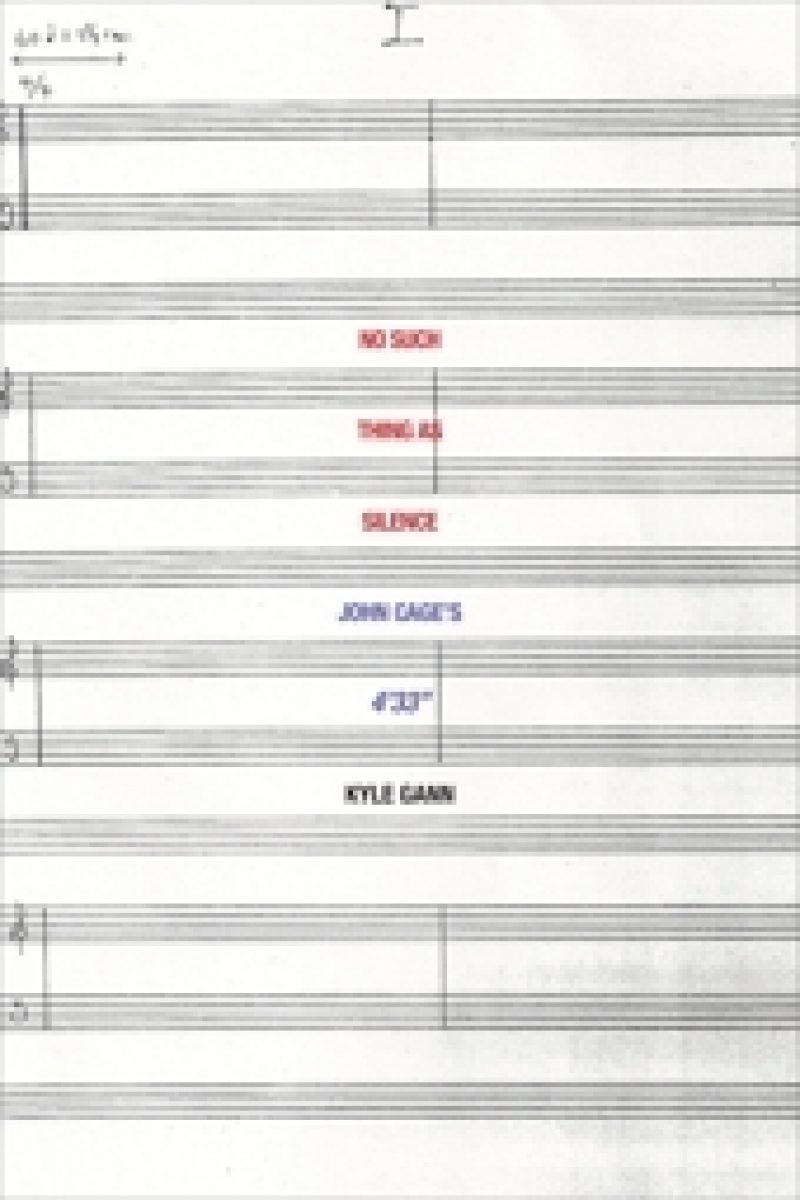 In No Such Thing as Silence: John Cage’s 4’33”, Kyle Gann tackles the experimental composer’s infamous “silent piece” with superb knowledge and skill. Writings on Cage are profuse, especially in the academic realm, and Gann’s book serves as an artful condensation. He had the benefit of having the John Cage Trust at his fingertips at Bard, where he has taught for some time, as well as years of thinking and writing about the questions Cage raised as the New Music Critic for the Village Voice. He even performed 4’33” in his own high school piano recital. No Such Thing as Silence connects all of the dots, outlining the composer’s influences—everything from the Hudson River School and Erik Satie to Robert Rauschenberg’s “White Paintings” and Morton Feldman—as well as the legacy that followed 4’33”, including the birth of minimalism and a variety of reinterpretations, reactions and tributes.

4’33” was one of the most controversial compositions of the 20th century (among many), and Gann does much to set the record straight. It would be hard to come away from No Such Thing as Silence with, if not great admiration, at least a firm appreciation of Cage and the thought and energy that he poured into those four and a half note-less minutes. Gann happily answered my inquiries via email from Belgrade.

John Ruscher As you mention in your preface, you encountered Cage and his work at a fairly young age. In what way did he, and 4’33” in particular, influence your own compositions and artistic direction? Your own career trajectory?

Kyle Gann The influences were many, but mostly subtle or indirect. As far as my music goes, in college I moved further and further into chance music before a friend convinced me I was losing my own identity. What I retained from Cage, though, was the willingness to accept accidents in my music that result from some process I’ve set in motion. It’s a good feeling to not be entirely in control, and to have your music surprise you sometimes.

Cage’s much bigger influence was personal. He was so self-effacing about accepting ideas and disagreements from other people, especially the young, that I’ve always kept that in mind as a model, even though (or especially because) it didn’t come naturally to me. And in general, my career as a critic of “Downtown” New York music was pretty much defined by covering composers who accepted Cage’s ideas and influences. Any composer who took Cage seriously was probably someone I was going to champion, part of the community I felt at home in. For composers, one’s attitude toward him remains something of a litmus test.

JR In the preface you also describe how, following your early obsession with his work, having to “expunge” Cage from your life to regain your own identity. What was it like to come back to him?

KG Like a lot of people, I had come to think of Cage as a kind of musical saint, someone who made our current musical life possible by redefining everything. As I went through his writings in some systematic detail, though, I was struck by how often his elegant mandates were ultimately justified merely as personal preferences. He liked randomness, non-directionality, nature, impersonality, and he wanted us to like them too, and he expressed his preferences very persuasively, with a wealth of erudition. Beneath all the charm, though, and coming back to him as someone who is now older than he was when he published Silence, I found his arguments unsystematic, sometimes grounded more in wishful thinking than experience, and occasionally inconsistent—which isn’t a criticism, just an acknowledgement that, after all, he was really a composer with a brilliant and provocative (and memorably quotable) writing style, not a guru or philosopher or aesthetician or moralist. As Whitman wrote, “Do I contradict myself? Very well then I contradict myself.” I found Cage a little more human and I was a little less awed. And so I began to separate out his music from his writings and opinions and feel more comfortable about sometimes disagreeing with him. He broadened the world of music considerably, but I don’t think he really shifted it away from its traditional basis.

I did also suspect that re-immersion in 4’33” might once again change the direction of my own music—but so far, I’ve found my ideas about Cage changing instead. I’m just not a nature-worshipper, and feel closer to Emerson (whom Cage didn’t like) than Thoreau (whom he identified with), as much as the latter sometimes dazzles me.

JR You mention that you ran into Cage on numerous occasions. What is one of your most memorable moments of those meetings?

KG For all his charm, Cage was rather a difficult person to talk to, because his mind led him into strange territory that was difficult to respond to. But once back in the 1980’s he mentioned the sex life of mushrooms at a talk in Chicago, and afterward my wife asked him to elaborate. He got very excited, diagramming on a napkin a chart of the four sexes of mushrooms, and explaining how two of them reproduce and then the other two, and the offspring of those pairs can produce another offspring. It was the most engaged I ever saw him with someone my age.

JR You never had the chance to interview him. If you had, what would you have been itching to ask him?

KG I did ask him things occasionally that I hadn’t understood from his writings. In 1974 I asked him where he got the chords for his 1950 String Quartet, and he replied, “I found them, like seashells on a beach.” I later read that same answer somewhere else in his writings—it was difficult to find something he hadn’t said somewhere in his voluminous articles and interviews. I doubt, if I had interviewed him, whether he would have offered anything substantially new. He had his own way of talking about his music and ideas, and it would have been obnoxious to press him to deviate from it. But I do wish I knew what William Blake he was going to quote in the lecture in which he wrote, “Need I quote Blake? Certainly not.”

JR What has been your most favorite or most memorable performance of 4’33”?

KG I actually haven’t heard more than one or two live performances by anyone other than myself. But I played it in a freshmen class once, and had the students write down and describe the sounds they heard in the music building, and afterward a girl delightedly exclaimed, “I never realized there was so much to listen to!” I enjoyed that so much I toyed with making “So Much to Listen To” the book’s title and even dedicating it to her.

JR The book describes how 4’33” was, in many senses, the nexus of composition in the 20th century—both a culmination of what had come before and a turning point that set the stage for things to come. Do you think that, as time passes, it will have a less immediate influence, or was it such a powerful statement that it will remain influential for much time to come?

KG I think that as many other composers have taken environmental sound into their aesthetic, the actual impact of 4’33” will become a little diffuse; it was revolutionary at the time, but in young people’s hindsight it appears to seem more and more obvious and necessary. It will always pinpoint a crucial historical step, but like Columbus’s egg, it seems less and less surprising that someone thought of it. One student in Serbia mentioned to me recently that he thought the only real performance was the first one, a total surprise, and that the “aura” of the work could never really be recreated again. Cage, who kept redefining the work for himself, would have disagreed, but for most people I think there’s some truth to it. By now, almost anyone who hears it live has an idea what will happen and how to think about it.

KG The uneven ticking of a small, battery-operated clock, the soft undulating hum of the building’s heating system, occasional distant doors opening, the lovesick woofing of a pigeon nesting on the windowsill. I’m in an apartment complex in Belgrade at the moment.

JR What might you say to someone who, even having read your book, is still dismissive of 4’33”?

KG It’s always all right to not be impressed by some work of art that doesn’t appeal to you. What you can’t be dismissive of, I think, are Zen, and anti-corporate protest, and meditation, and the place of silent prayer in religion, and the human benefit of occasionally shutting up and listening. All that’s important is to recognize that 4’33” was written as some intended and deeply felt response to all those things. Given that, of course it’s possible that some other expression of Zen, or some other act of protest, might be more effective or profound or attractive, or at least perceived as such. Still, enough people have been blown away by 4’33”, and enough will continue to be surprised by it, that the piece will always retain a certain power to change minds.

No Such Thing as Silence: John Cage’s 4’33” is out now from Yale University Press.

John Ruscher is a writer based in Brooklyn and also the Editor of EardrumNYC.com.