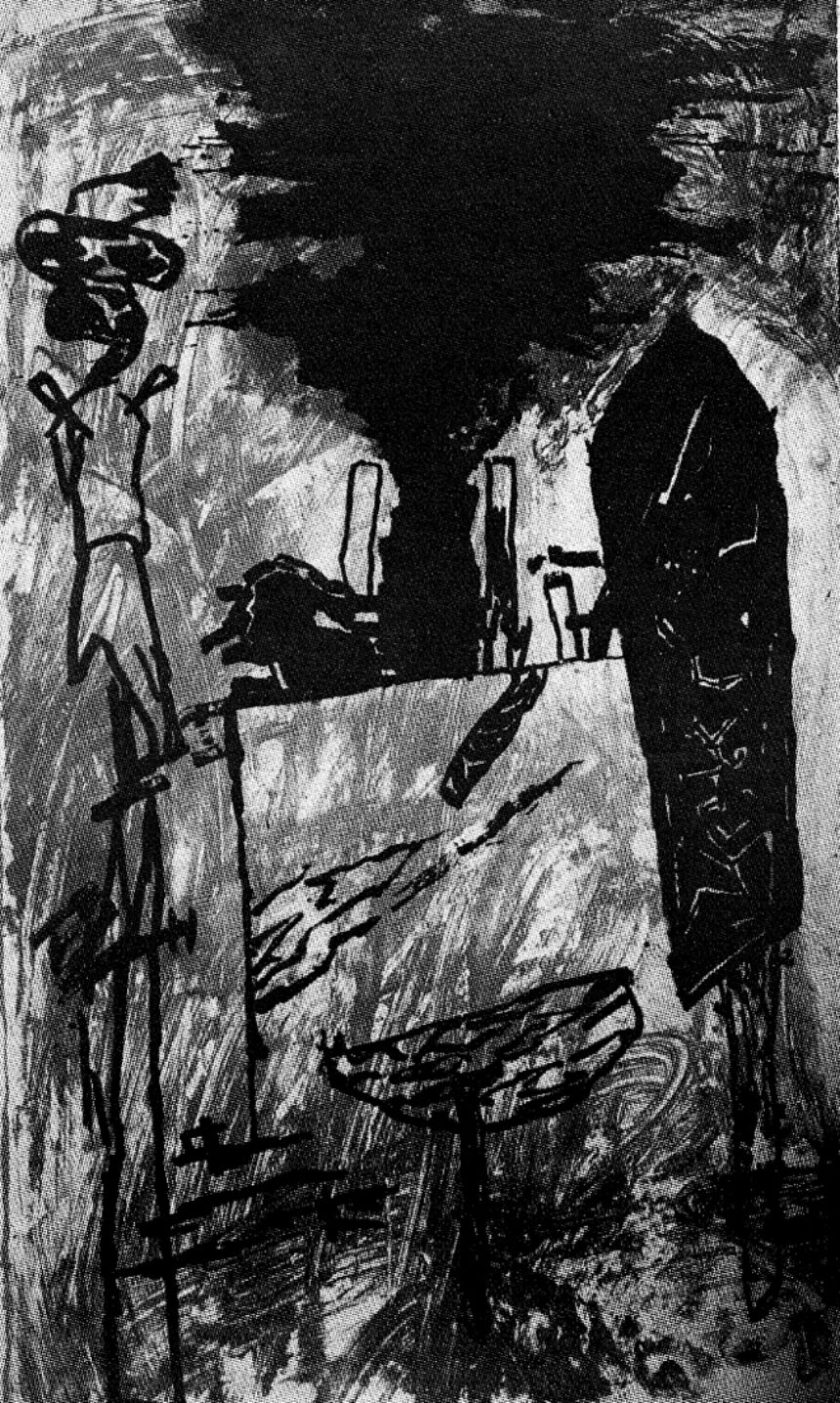 In an airplane, flying between New York and Lisbon, a relatively young man has a heart attack and dies. The duration of the flight is five hours, and the death occurs approximately four hours after take-off. It is not until the plane has landed and all the other passengers have exited that the flight attendants realize the young man is not asleep.

Wearing a wrinkled grey suit and black shirt buttoned to the collar, a relatively young man is sitting in a park in Seville. It is mid-morning. As the young man smokes a cigarette, he watches two young Spanish women, both wearing short dresses and transparent pink hose. As one of the women pauses to adjust a stocking, the man is momentarily able to see through the womens’ clothes, and observes the hazy outline of their skeletons.

In an apartment in New York, a young man and woman, nude, are lying on a bed. The woman is sleeping. The man opens his eyes to a faint orange light spilling through the unshaded windows from the mercury-vapors outside. He traces a small area of the woman’s body, in the hollow of her left collarbone, where a black and red scorpion is tattooed.

In a large airport in London, a young man wearing a grey suit and sunglasses, is asked by customs officials to empty the contents of his luggage. Several agents, wearing uniforms which include regulation shorts and kneesocks, accompany the man into a small room where he is requested to strip. Although now completely naked, the man still wears his sunglasses. The agents never ask him to remove them.

Wearing shoes with rubber soles, a relatively young man moves silently along the sidewalks of a Cleveland suburb. He notices occasional shadows moving across dim bedroom windows, and shards of plastic champagne glasses crushed into a synthetic lawn. The man is able to walk for miles and miles, hours and hours, without seeing a single other pedestrian, and becomes ecstatic in his loneliness.

Awakened by noises from another room in the apartment, a young man begins to lift his sleeping body, using his elbow like a crutch. His eyes are drawn to the glow of an unfamiliar electric alarm clock: 3:20 AM Paris. In the next room a young woman is sorting and packing her clothing into a small suitcase. When she has finished, she walks into the other room. As she pauses briefly in the light, the man watches the young woman slowly dematerialize into a thin vapor, then gradually reappear, before continuing toward him.

A glass of water, a cigarette lighter, cotton, and a spoon lie on the wooden tabletop. A relatively young man watches blankly as another man, several years older, fills the syringe he is holding with liquid from the spoon. He injects the liquid into a small, almost-black “nodule” forming on the vein in the inside crook of his left elbow. The slightly younger man also notices a similar dark-colored “nodule” on the same vein of the man’s right arm. He sits silently in the intense heat, as the sounds of Manhattan’s streets appear to slowly fade from the other man’s consciousness.

While packing his things into a small leather suitcase, a young man pauses to survey the bleak Berlin hotel room. Placing the last object into his case, a photo-illustrated edition of de Sade’s Justine, the man pauses again, studying the black and white photo on the book’s paper cover. A slightly unrealistic blond with a mid-60s hairstyle, wearing only black high heels and elbow-length gloves, is posed on a disheveled bed, legs spread to the camera, in what appears to be a cheap hotel room. On the title-page of the book, in penciled handwriting (not his own), the man finds the following quotation: “The head and the body aren’t connected except by the thin thread of a neck”—Mickey Spillane.

A relatively young man, wearing a nondescript grey suit and carrying a small suitcase, walks through the fluorescent terminals of a large New York airport. He stops to make a phone call from an endless row of pay-telephones. As he listens to a woman’s voice, pre-recorded on an answering machine, he takes a cassette tape from the pocket of his suitcoat. The cassette is labeled “Beginning Lessons in Portuguese.” He tosses it into a nearby trash can, and hangs up the telephone without leaving a message.