Silence and Silencing by Alejandro Zambra

Poet and novelist Alejandro Zambra reflects on artist Cristóbal Lehyt’s use of a Chilean song lyric and its powerful associations. 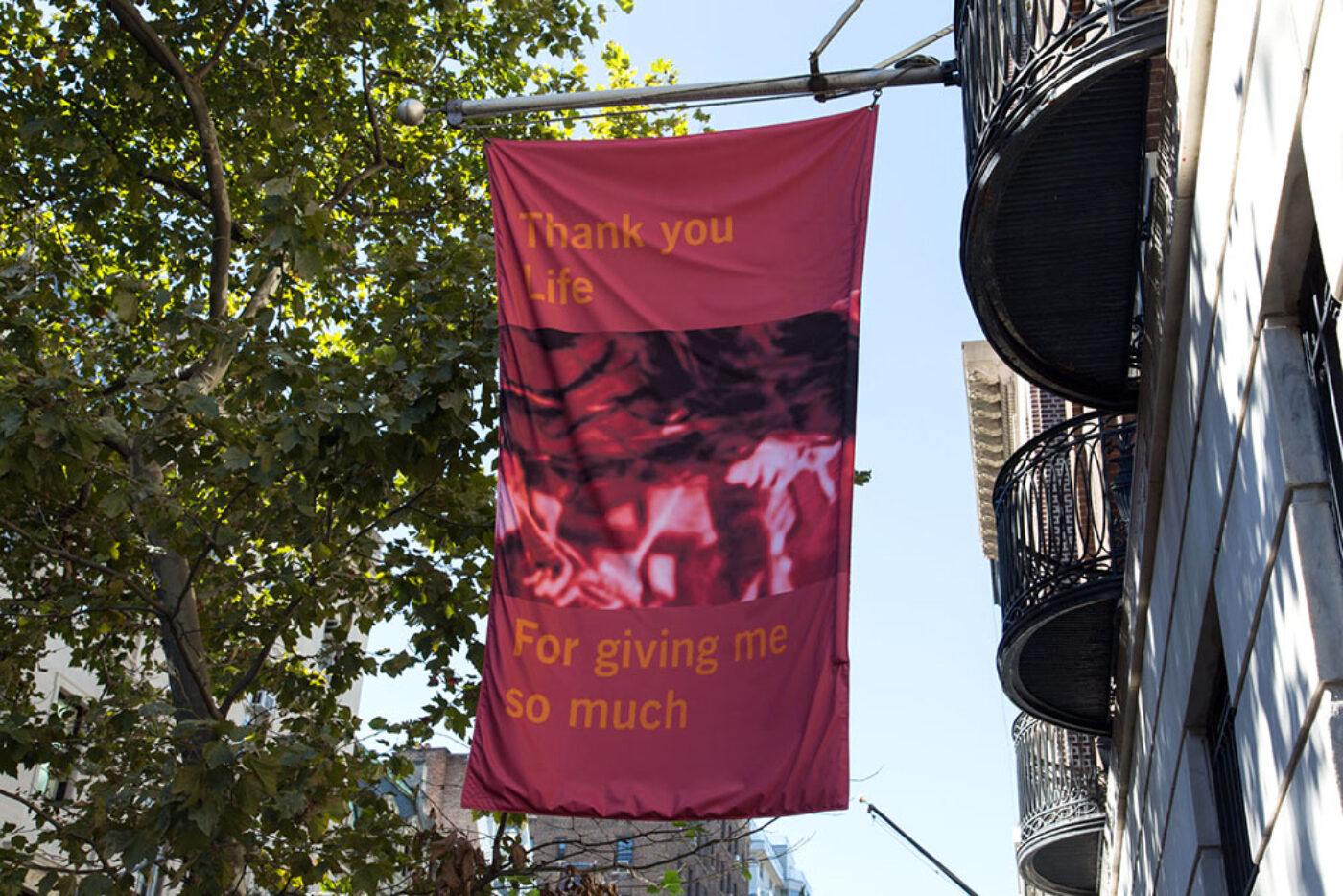 Gracias a la vida / que me ha dado tanto. (Thanks to life / for giving me so much.)

A history of Chile could be written on the basis of this verse by Violeta Parra, which is now decontextualized, “rescued,” and above all profaned by Cristóbal Lehyt: exposed to New Yorkers’ comings and goings, like just yet another advertising message, a mere detail, a call; a provocation that does not fear to pass unnoticed, that perhaps, in a sense, must pass unnoticed. Sincerely, I don’t know what my reaction would have been if I had unexpectedly encountered this message on 68th Street: astonishment, of course, and perhaps indignation or perplexity, most likely a feeling similar to the one I experienced four years ago, in the departure lounge for a flight to—precisely—New York, when I entered the duty-free store and heard another song of Violeta Parra’s, “Run Run se fue pa’l norte” (Run Run he headed North), the one I like the most. I was looking for a stuffed penguin for a friend’s child, but when I heard the song I stood stock-still, paralyzed in front of the wine display case, attempting to figure out what I was feeling.

In the end, I thought that Violeta Parra did not belong to that tourist store, to this non-place in the airport. That her records were sold there seemed natural to me, but that her music was actually playing in the duty-free store, standardized by the moderate volume, disturbed me; that this song of Violeta Parra’s occupied the space of inoffensive airport music, of those horrible simulations usually programmed for PA systems (the Beatles played on pan-pipes, to cite a typical example) provoked in me, at least at the outset, more perplexity than delight. Later I thought on the plane, that I myself, precisely in one of those books whose English translation I was preparing to present in New York, had written about this intermingling; at a point in my novel La vida privada de los árboles (The Private Life of Trees), the protagonist remembers his mother singing “La jardinera,” and the contrast between his (my) mother’s clear, rather lyrical, and innocent voice and Violeta Parra’s worn, untidy, telluric voice, makes him (me) think that his mother was singing leftist songs as if they were rightist songs.

“They were, possibly / the happiest years of my life,” says the Spaniard Jaime Gil de Biedma at the beginning of his poem “Intento formular mi experiencia de la guerra” (I Attempt to Formulate my Experience of the War). It’s the same thing I felt when thinking about the Chilean dictatorship and my childhood: this distance—this abyss—between public and private. I don’t know if my childhood was particularly happy, but I’m sure it wasn’t sad. And I grew up during the most awful years of my country’s history. While I was more or less free, thousands of my compatriots were being murdered and tortured, and Chile was being given over to the most savage kind of capitalism. This awareness, first formulated in this way during my adolescence, changed the shape of my memories. In other words: suddenly all my memories turned bitter; the mere act of remembering turned bitter.

The language of parents, the silence of our parents: sometimes we didn’t even know their position on what was happening in Chile. It was a way of protecting us. This was a very common sentence: we don’t talk politics in this house. Because it was understood that politics divided families, and because speaking was dangerous in itself. It was especially dangerous to speak about these topics with the neighbors. Television, as such, concealed reality with immense effectiveness, thoroughly compromised with the repressive apparatus. Nor did we know if our parents were the way they were owing to fear and repression or simply because that’s how adults always were. What were the differences between being an adult and being an adult under a dictatorship? I tended to think that grown-ups were boring, gray, stingy: only two or three adults seemed amusing or luminous to me. And what was the difference between silence and silencing? Or between being a child and being a child under a dictatorship?

I insist upon circulating between the singular and the plural: everything’s there, in this vacillation. Perhaps for a time the scene, the caricature, was this: someone in front of the screen deciding whether to speak in the plural or the singular, squandering hours on this dilemma and clinging to (or consoling himself with) or, in the end, burying himself in silence. Not saying “I”; not saying “we”; not saying anything; not speaking. There were many of us who, at the beginning of the 1990s, when childhood was annoyingly recent, didn’t believe that our experience was important: we felt we had nothing to tell, especially if we compared our lives with the testimonies of those who had lost their parents, their brothers, their children. Some of us decided to join silently in the mourning. We listened, that much we did: we tried to listen closely. And if instead of keeping silent, we spoke, shouted, demanded justice, there was no lack of people telling us: Shut up, you, you weren’t even born back then. And, of course, the adults were the protagonists, no doubt about it. We were stuck with the uncomfortable position of secondary characters.

There was also the side that was joyous, irresponsible, initiatory, connected—in my case—to the discovery of poetry. It is assumed that poetry is the genre for the expression of feelings, but it was also useful for not speaking, or at least, for not speaking clearly—for transcending the adult, stiff, and martial language that they taught us. First and foremost, poetry was more than a device to speak, a mode of keeping silent; a beautiful form, perhaps the most beautiful, of flight. Poetry—I know this sounds solemn and I’d like it to sound ingenuous as well—allowed us to breathe, or at least delayed that serious moment that we were inevitably approaching. I’m thinking about wordplay, tongue twisters, humor. I’m thinking about the importance for us—artists as well as poets—of Nicanor Parra’s work, which we associated with nonsense, jokes, popular wisdom, and also with the aesthetics of the avant-gardes, with literary tradition pure and simple or in capital letters, whether serious or parodic, but we knew that later, much later. (Family matters: if Lehyt had chosen a couple of lines of Nicanor Parra’s, the effect would have been radically different, in almost every respect, from what his sister’s verses provoke.)

Childhood always preserves its illegible, blurred, misty, fictional dimension: we were there and we weren’t, we lived incompletely, we existed, and yet from all those years, we only remember a few images. In our case, this purity was problematic. We ended up feeling guilty about having been children at that time. About not really understanding what was going on. But we picked up something, we knew something. We cannot plead innocent, but neither are we guilty. Besides, we have been judged and continue to be judged by what our parents did or did not do. Left-wing or right-wing parents, or parents like my own who attempted neutrality, wanted in their vast majority to protect their children. There were many of us children who grew up with this uncertainty, and our stories are more alike than we initially believed. When we discovered this coincidence, later rather than sooner, or perhaps sooner than later (how to know this?), a more collective desire emerged, a first-person plural that wanted to narrate these apparently insignificant lives.

Children-under-dictatorship: I remember later, when we were eighteen and wrote some poems or some full-throated surrealist howls, that a well-connected friend introduced us to a New York journalist who wanted to write an article on “the children of the dictatorship.” We found it absurd, we refused, we didn’t want to be such a thing. We wrote, yes, we aspired to say something, but this reduction, this inevitability, this already-written destiny of being the children of the dictatorship seemed denigrating and unreasonable.

The full text of “Silence and Silencing” can be found in the catalogue for Cristóbal Lehyt’s “Iris Sheets,” an exhibition recently on view at the Americas Society. Zambra and Lehyt will be in conversation Wednesday, 26 February 2014. For more information on this event see as-coa.org.

Alejandro Zambra is a poet, novelist, and literary critic. His novels include Bonsai (Melville House, 2008) The Private Lives of Trees (Open Letter Books, 2010), and Ways of Going Home (Farrar, Straus and Giroux, 2013).

The Fog of Family by Charlotte Whittle 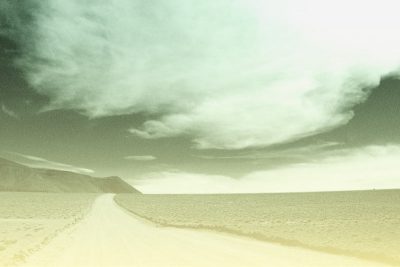