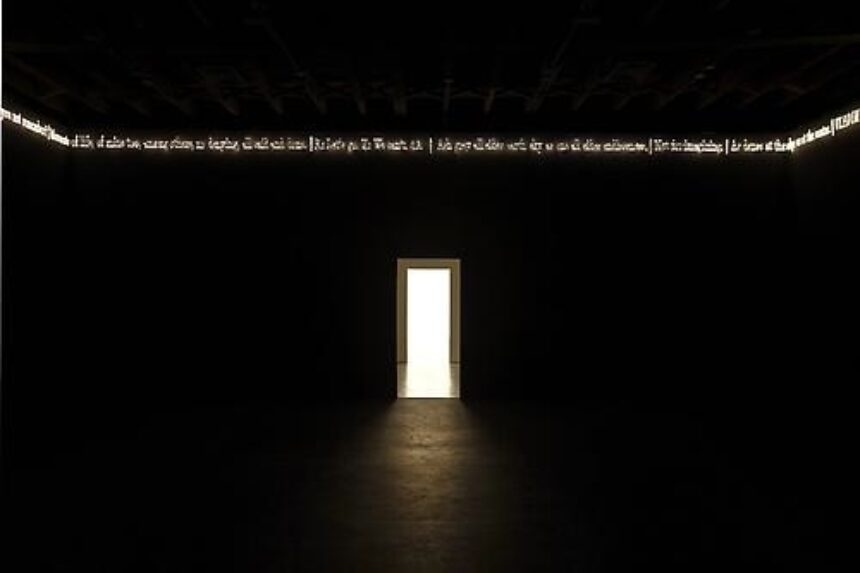 Installation view of Joseph Kosuth, Texts (Waiting for-) for Nothing, Samuel Beckett, in play at Sean Kelly Gallery.

First change of all in the end a fragment comes away and falls.
Traces blurs signs no meaning light grey almost white.

—Excerpts from Samuel Beckett, Texts for Nothing

Samuel Beckett is source and inspiration for Joseph Kosuth’s new installation at Sean Kelly Gallery entitled: ’Texts (Waiting for-) for Nothing’, Samuel Beckett, in play. Along with two other installations—his ten-panel dictionary definitions of the word ‘Nothing,’ first shown in 1968 as Titled (Art as Idea as Idea), and a neon installation, Ulysses, from 1998—Kosuth creates an achromatic order of “black… grey almost white”—classicism not of Greek ideals or of late Roman imperialism but of the Roman Republic’s archive, a place of containment and a domicile.

Within a darkened, square chamber, text glistens along the ceiling perimeter. We look up to it, as to authority, yet find little reassurance there. Neon tubes are over-painted to alternately obscure or reveal words of a residual nature, remnants of memory both personal and cultural. Kosuth’s classicism of containment destabilizes our conscious thought; we stretch our necks to view the glowing frieze only to have it fade in and out of vision, just as ideas flow in and out of the consciousness of the old and preoccupied, or the young and distracted.

In Texts for Nothing (1950-52), Samuel Beckett reconstructs memories that are both replete and fragmentary. They say nothing and tell us everything: of his fear of solitude and his desire for isolation, of his doubts that language can hold up to its promise and his faith that the relations between words make meaning. It is about listening and talking, about toil and play, but above all these texts also reflect the uncertainty of human existence as played out in language or within power relations. 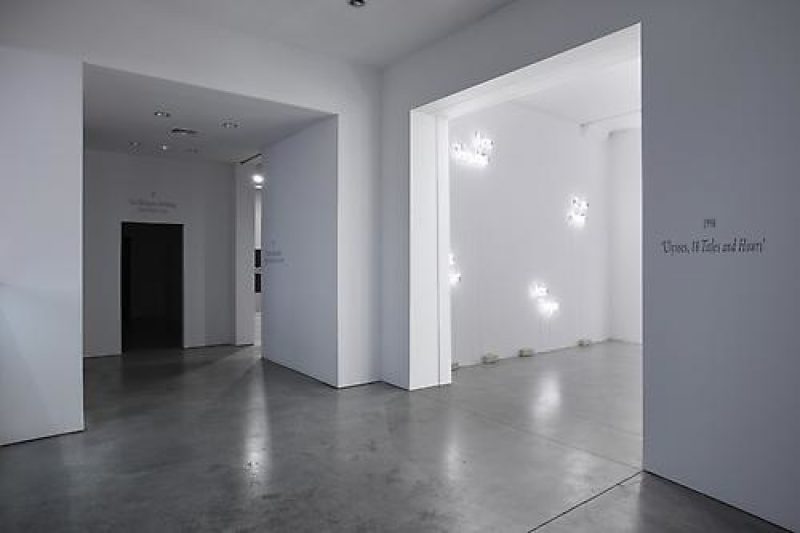 Texts (Waiting for-) for Nothing, Samuel Beckett, in play at Sean Kelly Gallery.

Moments of life, of mine too, among others, no denying, all said and done.

—Excerpt from Samuel Beckett, Texts for Nothing

Beckett warned his audience not to view Waiting for Godot (1948-49) as either naturalistic or a record of experience. This does not preclude us the use of personal experience to understand the text, however. As Kosuth notes of Montaigne’s phrase, “The word is half his that speaks and half his that hears it.” We arrive at truth through the gaps of translation, the slippage between communication, and that expanse of time that is filled with nothing—during which we, like Didi and Gogo in the play, Wait! Between one word and the next is thought. Between zero and one is an infinite variety of compositional language. Between my writing and your reading are the cultural specificities that split intention from comprehension. Whose history? Which stories?

Nothing as in, “She means nothing to him.” Nothing (nuth’ing) as in Zero & Not (Kosuth’s installation of redacted text from 1986). Nothing begs the question of time implicit in Beckett’s writing, yet nothing as a placeholder is cumulative: enough zeros and the one becomes a mighty large number. Zeros and ones diversely combined is the binary language of digital communication—subtle, changing, and expansive. Nothing includes its opposite: Everything. The jig is up. Truth and lies exposed. Pandora’s box: a story, long buried, opened to the light, reveals a messy and unmistakably painful inscription. But in the desperate struggle to contain ourselves, lies the imperative—__Wait!__ Text for nothing and for everything, marking time and shifting connections. Naught but emptiness… and irony.

Kosuth was outspoken about the conceptualism of the ’60s and ’70s making enemies among friends. His antipathy for critics was also clear. Politics in art was inherent in the structure of language, the destabilization of tradition, and the interchange of ideas. For Kosuth art was for art, not formalistically but in its ability to define itself; it was hermetic, autonomous, and had more in common with Beckett and Adorno than Brecht and Benjamin. So even the avant-garde was divided ideologically and for what?

The difference between Kosuth’s Titled (Art as Idea as Idea) and his ‘Texts (Waiting for-) for Nothing’ is the space of a life’s endeavors and divisions. It is the space between skin and bones, between speech and silence. Somewhere in the middle is the work Ulysses, 18 Titles and Hours, referring to Beckett’s mentor, James Joyce, a leviathan of literary modernism. It would be Beckett, however, who would bridge the gap between modernism and postmodernism, lending truth to the lie of division.

The classicism of Joyce’s Ulysses was a structural device, as critical as it was analogical. Kosuth’s harmony in “black… grey almost white” adds structure to idea, linking a broader set of connections to his earlier insistence (in an interview with Jeanne Siegel in 1970) that “words are meaningful in relation to a linguistic system, not in relation to the world.” Texts places us within a space of language but, with whatever analytic means necessary, we finally make sense of our utterances through the flesh of our bodies, animating the word through experience.

Forget me, know me not, yes, that would be the wisest, none better able than he.

—Excerpt from Samuel Beckett, Texts for Nothing

Joseph Kosuth’s Texts (Waiting for–) for Nothing’, Samuel Beckett, in play is on view at Sean Kelly Gallery March 30—April 30.

Both artists overturn photographic conventions to slow down our reading of physical and verbal landscapes. Their exchange touches on the retina, the sun, and camera obscura.

Krzysztof Wodiczko by Giuliana Bruno
Brazil: Body and Soul at the Guggenheim by Carlos Brillembourg 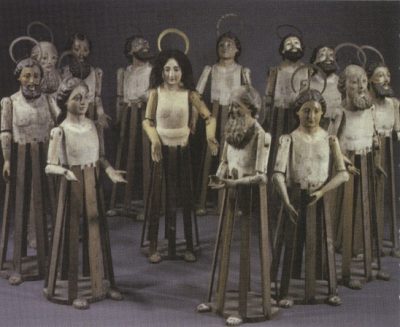 Reviewer Carlos Brillembourg finds the absurd task of representing 500 years of Brazilian history in a single exhibit further hampered by Jean Nouvel’s Guggenheim redesign and the franchising of the museum brand.