Shifting Connections untangles the complexities inherent in the work of Hans Haacke. 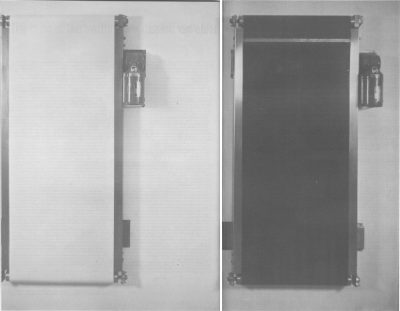 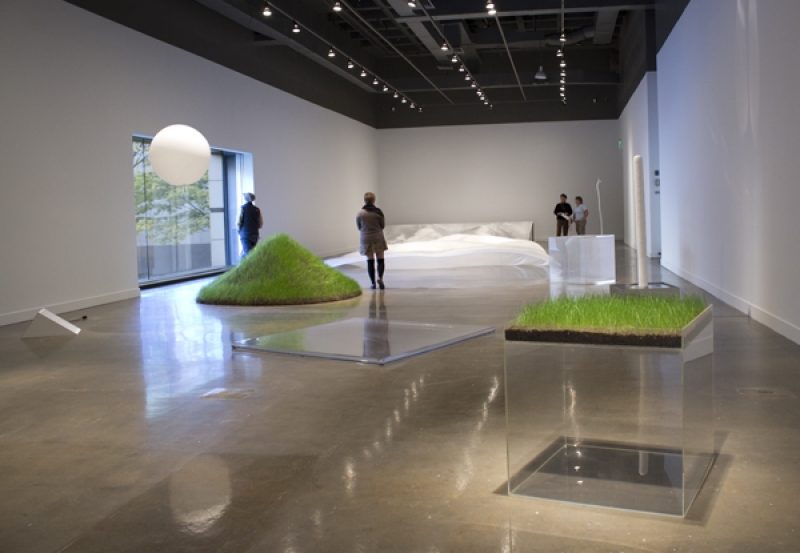 One of contemporary art’s best-kept secrets is that Hans Haacke’s work can be fun: what a pleasure to see the repeat performance of his 1967 systems art exhibition at MIT! I tried to imagine what it would have been like to see this seminal work when it was first exhibited—questioning whether it was art or science—but I soon disconnected from time and history. It was simply nice to be there! The wafting sensuality of Wide White Flow (1967/2006/2010), the sinewy wiggle of White Waving Line (1967/2011), and the enamel-like sheen on the sleek, wet surface of Ice Stick (1966) all speak of a straight-forward aesthetic that shifted the emphasis in art from medium and mimesis to art as a dynamic environment. Whatever its effect in 1967, the work exerts a strong presence today as a lively interface between medium, methods, context, and content of art.

Systems art from the late 1960s marked a transition from art-as-object to the object of art that curator Caroline Jones describes in the catalog as “a last, exquisite apogee of techno-utopianism” before being superseded by Haacke’s more critical social systems, which often outlined in documentary detail the relations between economics, politics, and culture. The turning point in Haacke’s art coincides for Jones with the skepticism of the radical movements of 1968 that highlighted the use of technology in the production of war, prompting an increasingly oppositional stance. For every real-world element—earth, air, water, and energy—visible in the List Center exhibition, these works seem far removed from the very real economic and political conflicts of our lives, whether Prague (1968) or Arab Spring (2011).

I understand the inclination to divide the artist’s work into periods of formal optimism and analytical critique but I don’t agree with it. The pieces in the gallery appear as both distinct entities and as an integrated whole. Like atoms, three basic tonalities are distributed regularly throughout: semi-opaque white of a balloon, parachute, and fabric, transparent colorless acrylic in the square and cubes, and verdant grass. There is also a certain volumetric equivalency between shapes—sphere, cone, cube, and loose drapery—whose witty similarity to exercises in a Beaux-Arts drawing studio belies a purpose that has nothing to do with the humanistic tradition of representation. The relationships within and among these elements are not the cause and effect of light to shadow but a more complex set of variables including multiple, mutual, and recursive dynamics in an interplay between light, water, wind, and gravity or, in other words, a manifestation of system theory’s scientific principles. These same variables operate in Haacke’s social systems whether his visitor polls from the early 1970s or the now iconic example of Shapolsky et al. Manhattan Real Estate Holdings, A Real Time Social System, as of May 1, 1971.

As his work tells us, there are no neat divisions between realms. “The world of art is not a world apart,” Haacke reminded me in a conversation we had in 2008. Intrusions are a common feature of existence. Consider the sunlight filtering through the large gallery picture window as it warms the air in the clear acrylic Condensation Cube (a.k.a. Weather Cube, 1963-67/2006) and directs the growth of grass on the conical mound entitled Grass Grows (a.k.a.Grass, 1967-69/2011). Spontaneous plant growth plays a significant role in Haacke’s Der Bevölkerung (To the Population) permanently installed in Berlin’s Reichstag building in 2000, evidence that he never abandoned one method of analysis for another means of critique but that they are all part of an emphasis on the relations between things, intrinsic to the production of art, wealth, or power. In a 1971 interview with Jeanne Siegel, Haacke defined a system as “a grouping of elements subject to a common plan and purpose [that] interact so as to arrive at a joint goal.” Haacke is flexible about the elements and specific as to the goal. It is neither technology, nor the systems behind it, that is tainted but its application to war. First and foremost, systems analysis explains the mechanisms of life! 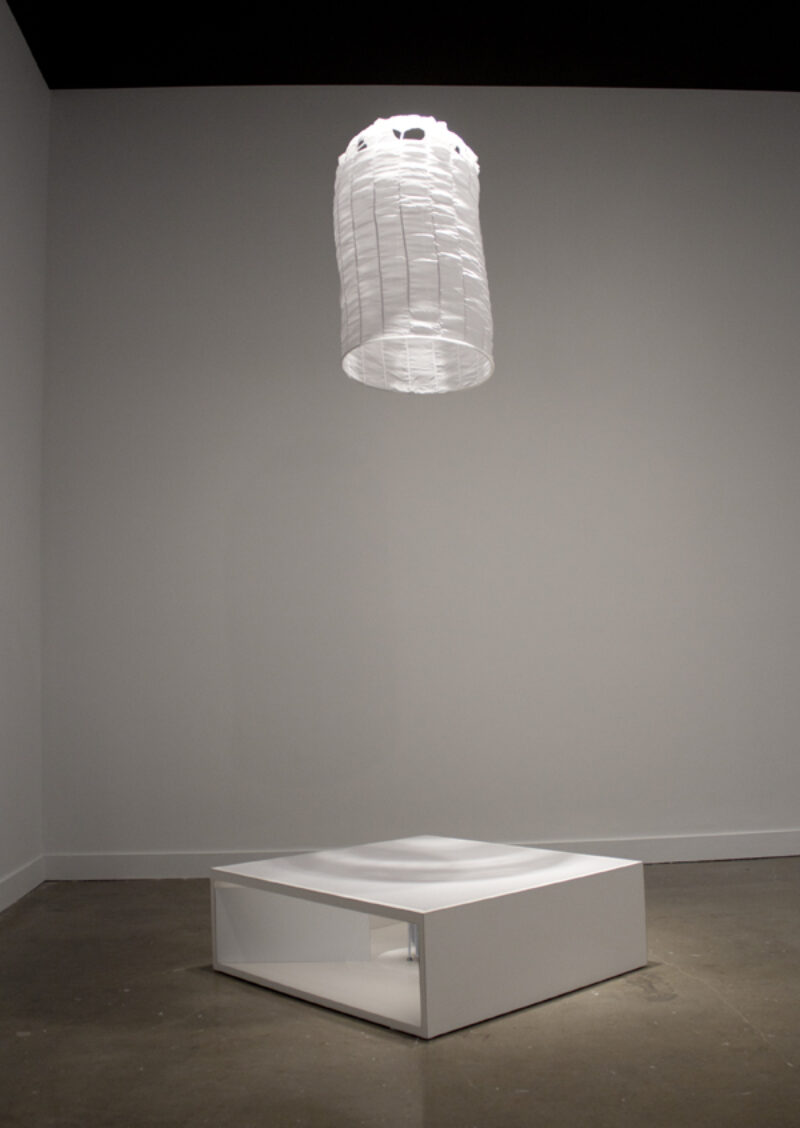 At MIT in 2011, the pressure of wind-generating fans contend with the forces of gravity as silk fabric sweeps across nearly a third of the gallery floor, rising and falling in undulating crests, evocative of ocean waves or linens airing in the breeze! But the artist named the work Wide White Flow (1967/2006/2010), a descriptive term, rather than Sunset Along the Shore, an evocative one. Fantasies or dreams are irrelevant here: the legacy of Romantic nationalism used to support the ideology of the Third Reich stung deep into a sensitive postwar German consciousness. Is it any wonder, Hans Haacke—born in Cologne, Germany in 1936—sought to negate emotion as a valorizing link in the cycle of creative momentum when the principles of empathy had completely failed social justice?

Even so, the beauty in Haacke’s works is unavoidable, and the light delicate humor of a bug on my hand, skipped from the environment of Grass Grows, reminds me of the intricacies of shifting connections. I smile reflecting on the hum of energy in the gallery; it has been a long time since art has prompted in me recognition of the strength and resilience necessary for life and the battles it presents. These systems may not need an emotional response to complete their cycle, but I am happy to experience their fundamental—not utopian—processes. Thank you, Mr. Haacke! 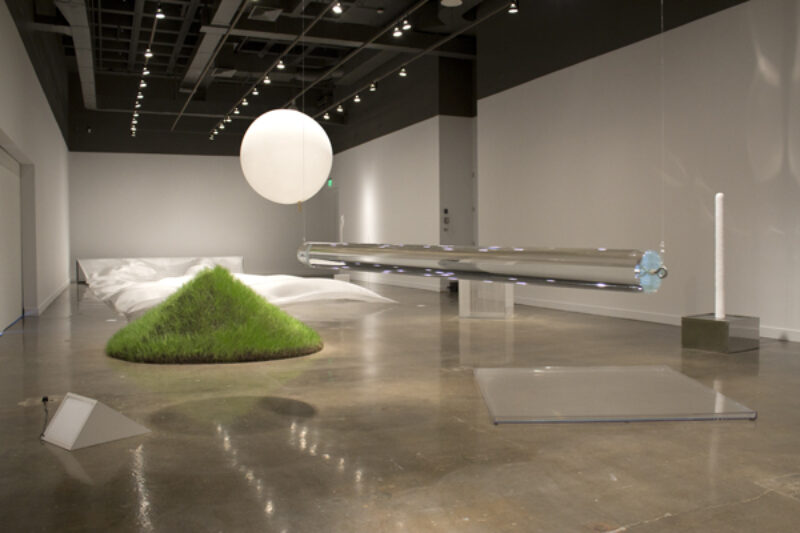 A retrospective, Hans Haacke, will open in February at the Museo Reina Sofia in Madrid, Spain and run through July 23, 2012.