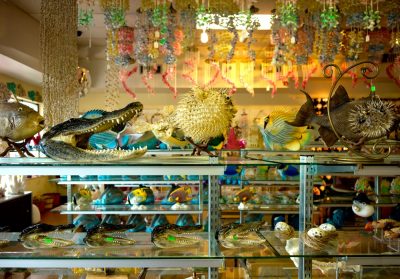 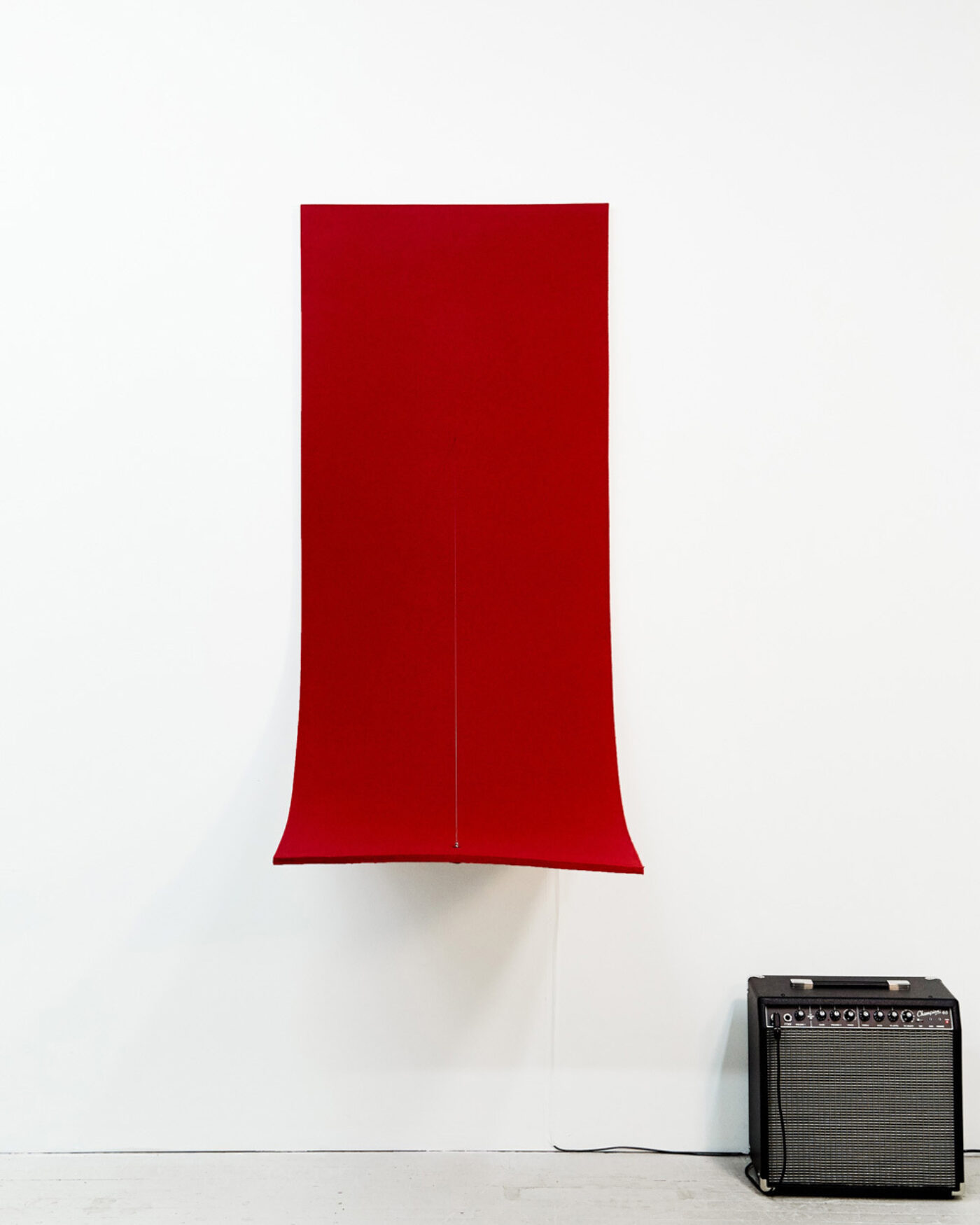 How do we move through the world? What drives us? What are our responsibilities as artists and as people? Naama Tsabar has been creating sculpture, installation, and performance work for the past two decades. She utilizes her musical background to visualize her utopian view of the world—a world where hierarchy and power are replaced with attentiveness, passion, and solidarity.

We began our conversation by discussing recent performances of Closer and Work on Felt at Páramo gallery in New York City.

Naomi Lev Can you describe the origins of Closer and Work on Felt?

Naama Tsabar I originally created Closer in 2014 for the performance series Blood Makes Noise at the Guggenheim Museum in New York. The installation consists of a freestanding corner wall that has an inverted instrument inside it and a singing chamber, while microphones penetrate from the other side picking up the sound and sending to amplification.

NL When and why did you start working with felt?

NT The idea of having a flat surface and marrying it with a string to create sound initially originated in paper form in 2012. Artis, an organization that promotes Israeli arts abroad, asked me to create work on paper for their NADA booth. I decided to sculpt the paper while giving it the ability to create sound. That was the first time I embedded carbon fiber, which is the material I embed in the soft felt to create tension and rigidity. 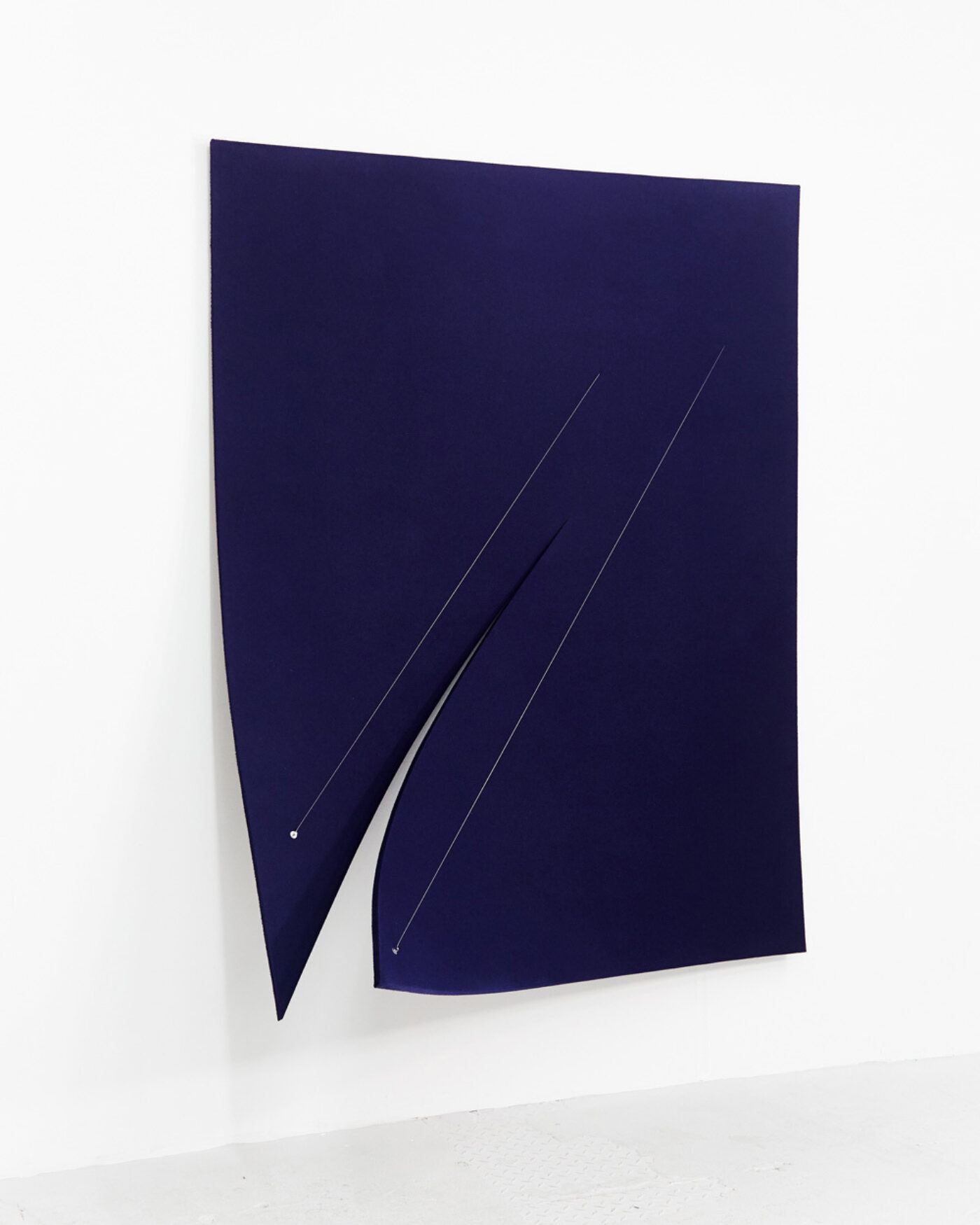 NL How are these works created?

NT It‘s a laminating process where I combine sheets of carbon fiber with epoxy.

NL How did you realize this is the material you need?

NT I started using carbon fiber for Untitled (Babies) (2008), which began as a video in which I played a song with a female band on a stage. Toward the end of that video I bang the guitar on the stage—the guitar remains but the stage collapses.

The guitar was coated with carbon fiber and then refinished. Through this experience I realized that marrying carbon fiber with felt would work well. The first marriage was of paper and carbon fiber, and it was a relatively small piece.

NT Yeah, I don’t think I’ve ever exhibited them again.

NL Why is that?

NT I really love the body-object ratio, and I think they didn’t establish that relationship. The first large-size felt I made was a big floor piece that resulted from a conversation with curator Hadas Maor about the history of felt in art. It was an interesting move because it defied both the place of felt in instruments as a silencer and became the chamber itself. I was thinking about Robert Morris’s post-Minimalist gravity felt sculptures, and the deadening of sound in relation to Joseph Beuys’s felt suit for a piano. My first two pieces were on the floor, and in late 2015 I moved up to the wall.

NL I often see musicians carrying their heavy musical instruments with such affection and responsibility, as if they were another body or their spouse. Are these performances a transmission of that relationship?

NT That’s interesting. When you play the piano, it’s a place—you sit down and your body is conformed. I think the felt objects reflect that order—the one conforming to the other.

NL In the performance you are grasping and stroking the felt. It appears almost like a ceremony.

NT It’s true, there is something ceremonial about it. When the performance starts I see the audience, but once I approach the felt and turn to it as a performer, I see nothing else. The performance doesn’t start with activating the string—rather, with pushing the body against the object, touching. It’s a spiritual experience. 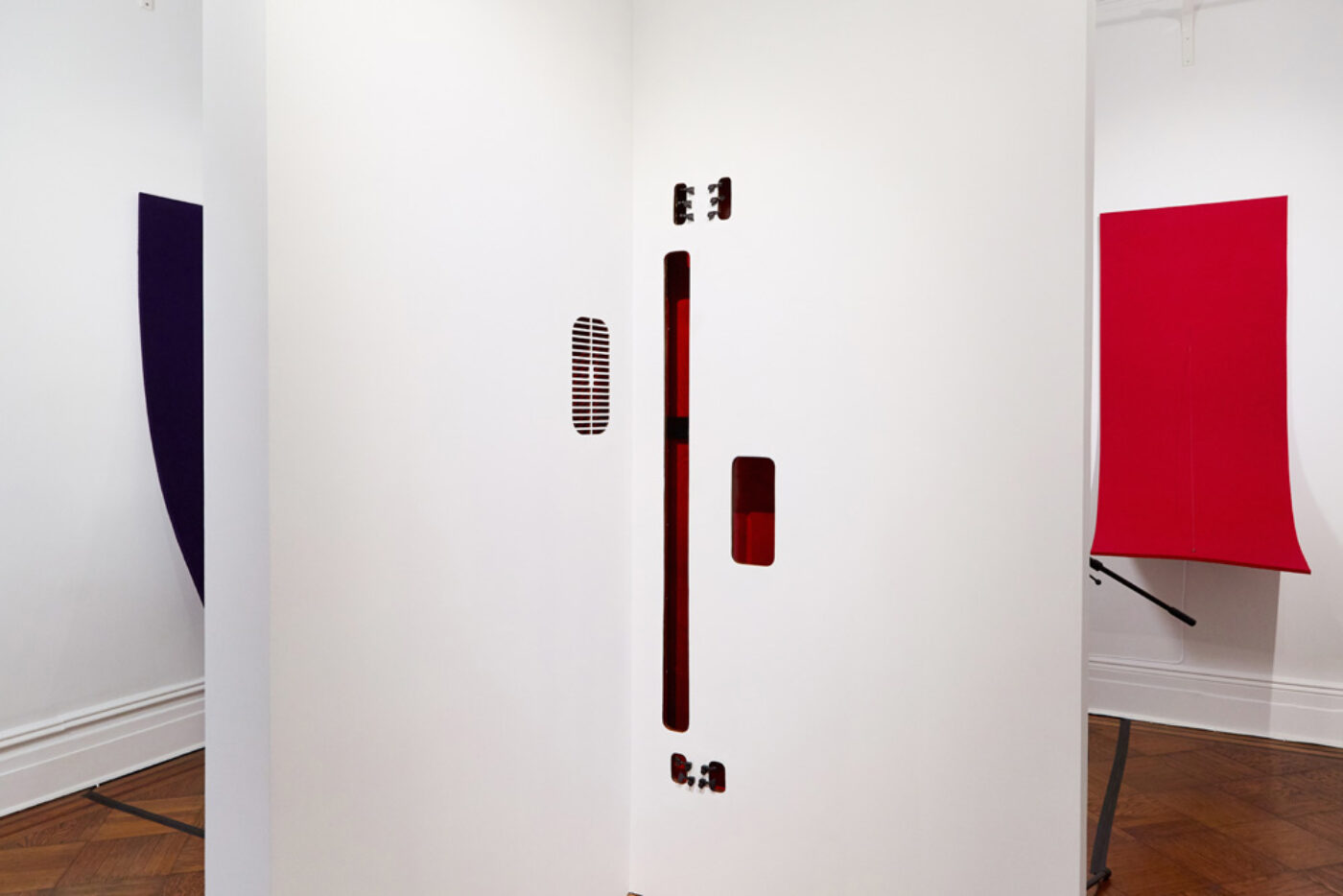 NL How do you choose your collaborators?

NT I choose the fabulous ones! I have a great community of musicians in many places in the world. I try to work mostly with women or gender nonconforming musicians. It’s important to me in terms of visibility and considering the gendered history of the object, and where we want it to be now.

NL Do you find that other things are politically important to you when creating and performing?

NT There are aspects to the works that are philosophically related to power structures, which I’m very interested in rethinking, exposing, and fragmenting. For me the fragmented experience is very important.

NL What do you mean by fragmented?

NT That there is no one central point of power, it’s dispersed. It’s important to me to destabilize the power structure that our society is built on.

NL And formalistically the audience is immersed in your work so that there is no clear separation.

NT Exactly. Closer is one of the works I really love, particularly when it’s performed in a big space, because you can’t see the performance and hear its amplified outcome at the same time. Usually when we go to a show everything is outputted through a central PA system, and there’s a perfect spot to stand in order to see and hear the show. All these terminologies reflect components of our society.

NL I want to talk about sexuality and sensuality. You mentioned that the microphone “penetrates” the wall. The performance also responds to this notion when the singer strokes her hands gently inside the wall. These are very sensual elements. In relation to female history and our role as women in contemporary society, what you are doing is sexual, but from a different angle.

NT We are all sexual beings. When Madonna came out with her Erotica album and Sex book, Prince was walking around with his ass bare and was not considered provocative to the same extent. Women’s sexuality has always been read in the service of men, and that’s preposterous!

I also seek to break apart and penetrate the power structure within the history of architecture. I’m interested in inverting and undermining heavy modernist patriarchal structures and perceptions with which we grew up. Closer does that very heads-on; it’s not only that you penetrate it in order to play and activate it, but the entire inside of that cavity is lavish red. It’s a new belief system.

NL You can’t see it, but you feel it.

NT Yeah. We’re all moving to that beat. 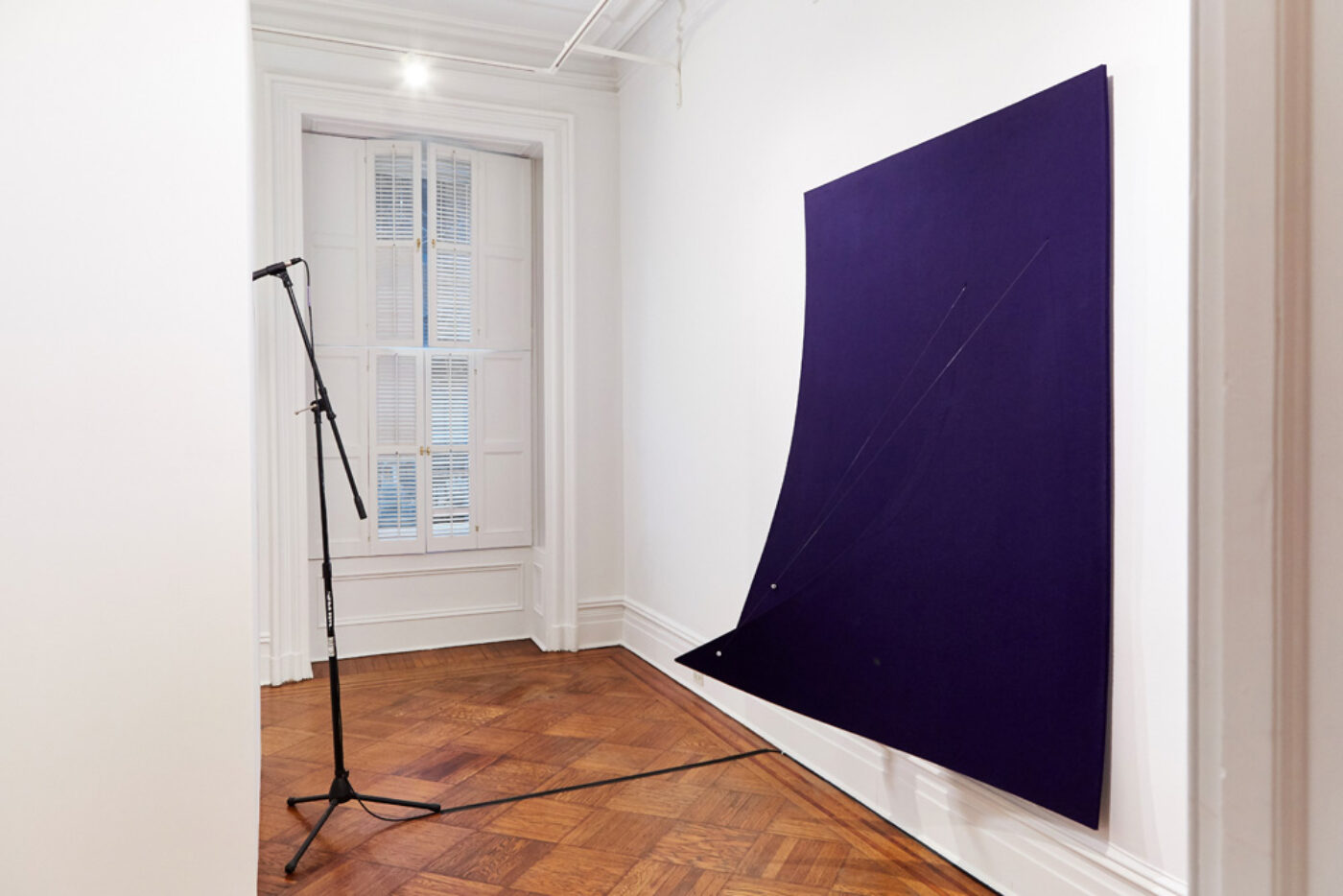 NL We both grew up in a patriarchal neighborhood surrounded by military people. It’s interesting for me to understand how that influenced what we talk about now, and how we bring it back to the forefront of our work.

NT Yes, we both were raised in Israel in a very patriarchal society. That being said, I grew up with a very strong woman in the house who helped shape me into the person I am today. Not to say that it was equal to the patriarchal forces, but strength was definitely there.

I think that as we become more technologically advanced and some things can be done much better by nonhumans, the place of women will become more significant. Not because women are not technically capable, but because it wasn’t given to them for so many centuries as a way of putting them down. Women can spiritually bring something super important to our society.

NL So how do you take all this and proceed to your next projects?

NT One of my newest projects is titled Melodies of Certain Damage (2018), and it continues what I call the guitar series, where I investigate the place the guitar and gender have within music history. The starting point of my new projects is kind of the endpoint of the guitar in rock ’n’ roll history, which is “the break.” It is the climatic moment when the guitar breaks, but then no one talks about the guitar after that. As part of this project I get new guitars at my studio, and I break them. It’s not a climatic act; there is no sound; and it’s very technical and dry. As the guitar breaks I map out the pieces, so there is a Dadaist aspect to it: the way it breaks is the way it is. Then I reinsert the pieces into working order by putting new sets of strings on them. The guitar that used to be an object is now a place in which you insert your body. It is shattered on the floor. Then you’re almost in a compromised position, because you are on the floor playing next to your instrument. I’m interested in seeing how movement into this position is derived from power rather than submission.

Naama Tsabar: Transitions #4 is on view at the Kunsthaus Baselland in Basel, Switzerland, until July 16. Her exhibition at Páramo can be viewed by appointment until the end of June.

Naomi Lev is an art writer and curator based in New York. She is the founder of Artistsandwriters4ever.com, and her writing has appeared in Artforum.com, artcritical.com, Tohu Magazine, Art in America, and elsewhere.