The artist on voice, intimacy, and the physicality of sound. 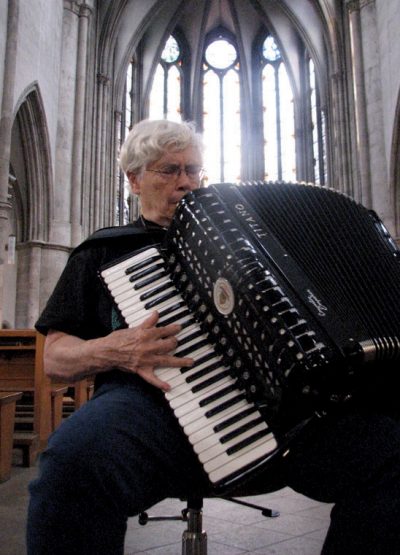 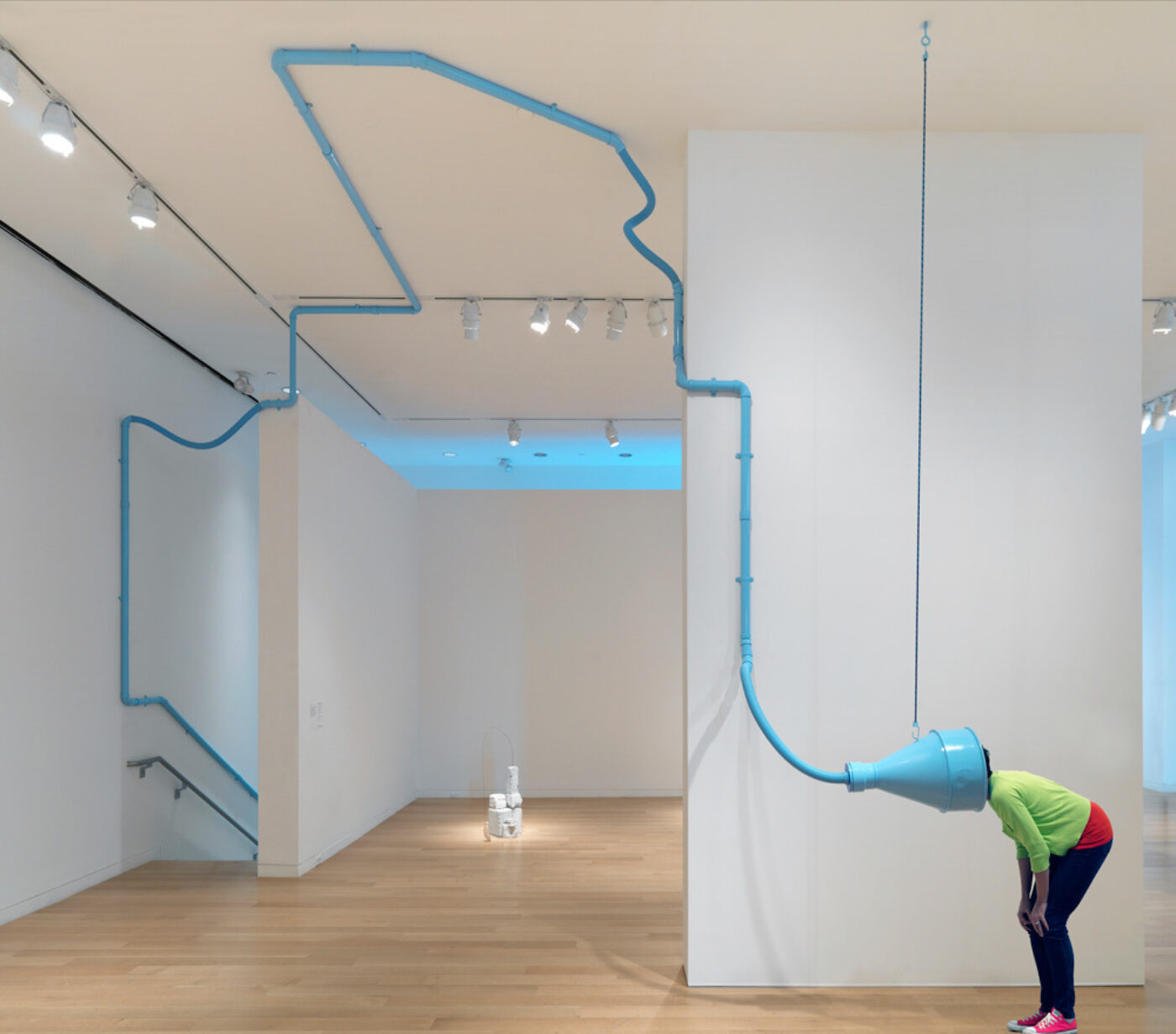 Julianne Swartz is a sculptor who began using sounds in 2005 to further her investigation into human perception. In 2017, she presented at the Museum of Arts and Design in New York City the installation Sine Body, in which sonic vessels embody and perform a vibration that is generated and recorded through an electronic feedback mechanism. She and I met on the campus of Bard College where she teaches to discuss this piece and her sculptural approach to sound.

Mathilde Walker-Billaud When I encountered Sine Body, I was struck by the physical presence of the objects. I wondered if you ever thought of these sculptures—or shall I say “creatures”?—in the lineage of cybernetics?

Julianne Swartz I made the Sine Body vessels to produce, hold, and emit concentrated vibration. Initially I thought I would make more traditionally shaped glass and ceramic vessels, in order to play them sonically. As I worked with numerous processes to integrate the two materials, the forms became organic in shape, resonant of parts of human bodies, and also very much their own bodies. The shapes were not right until they felt alive to me, and this alive quality integrated the two materials/parts into a hybrid.

I have not thought of my work in the lineage of cybernetics, but the parallel makes sense. I think of my studio as a lab, and I do engage scientific principles, mostly in the realm of physics. Many of my works evolve when the materials and processes push back, as was the case with Sine Body. I call that physical feedback. I have learned to let the materials and sites guide me, and shape the work, just as I guide and shape them to embody my idea. 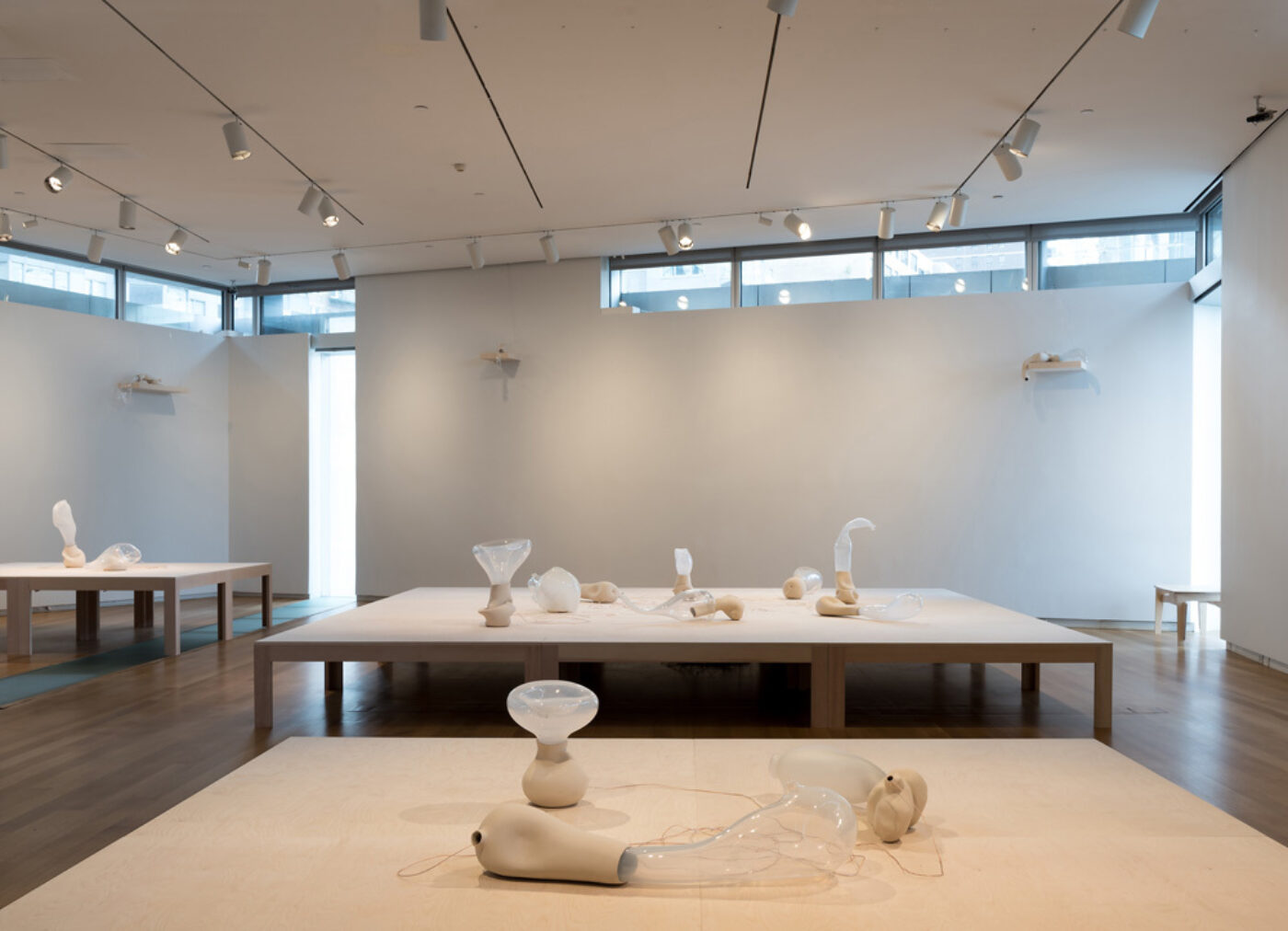 MWB How does this tight feedback loop between you and the material impact your working process?

JS I bring to life objects or sites, not only through science and craft, but through a process of emotional and physical investment. For example, the cement blocks in Surrogates, JS, KRL, ARL were assembled and undone, swapped out and recast, roughed and smoothed, and reassembled many times until I “knew” the figures. Once the sculptures took on particular idiosyncrasies for each represented body, they were recognizable to me and could feel alive to my viewer. This may relate to animism as well as cybernetics.

MWB In this artwork, whose title refers to the cybernetics imaginary, you inserted several clocks inside the figures, which tick in an irregular and unpredictable manner. This ticking points to the mortality of the bodies, but also to the mysterious condition of being. What animates matter? Is this play with the uncanny perception of liveness a way to engage your viewers?

JS It is harder to remain neutral toward something that feels alive. I often think about engagement with my viewer while I work: What am I asking for, and what can I give for that ask? If I want a level of commitment from my viewer, the work needs to pay back for this with an equally potent experience. The commitment can be physical or emotional.

MWB What is the role of sound in this exchange with your viewers?

JS Sound is a privileged medium to activate emotions. It is closer to the subconscious, and to the primal self. It is the first sense to be activated in the womb, and last one to go before death. In the hours before my father died, he couldn’t stand to be touched, but he teared at the sound of my voice. A friend told me a story of when her son was born. He was blue, because he wouldn’t breathe. The doctor said to her, “Speak to him!” It was not until he heard her voice that he finally took a breath. Anne Fernald, a researcher in psychology at Stanford, does research about sound as touch—how mothers “touch” their babies over distance with voice. Her research found several “melodies” of communication across cultures and languages. Tones (not words) are universally communicative.

In terms of exchange and engagement with my viewers, I would say most sound works fall into the category of participatory works, even if they are not physically interactive. Sound asks the viewer to listen, interpret, and feel, or to decide to walk away and end the encounter. Engaging with a work is a manner of performing, and the work also performs for the viewer. This dual performance can be a potent and vulnerable situation. If the viewer feels self-conscious or expectant, they enter an emotional state. 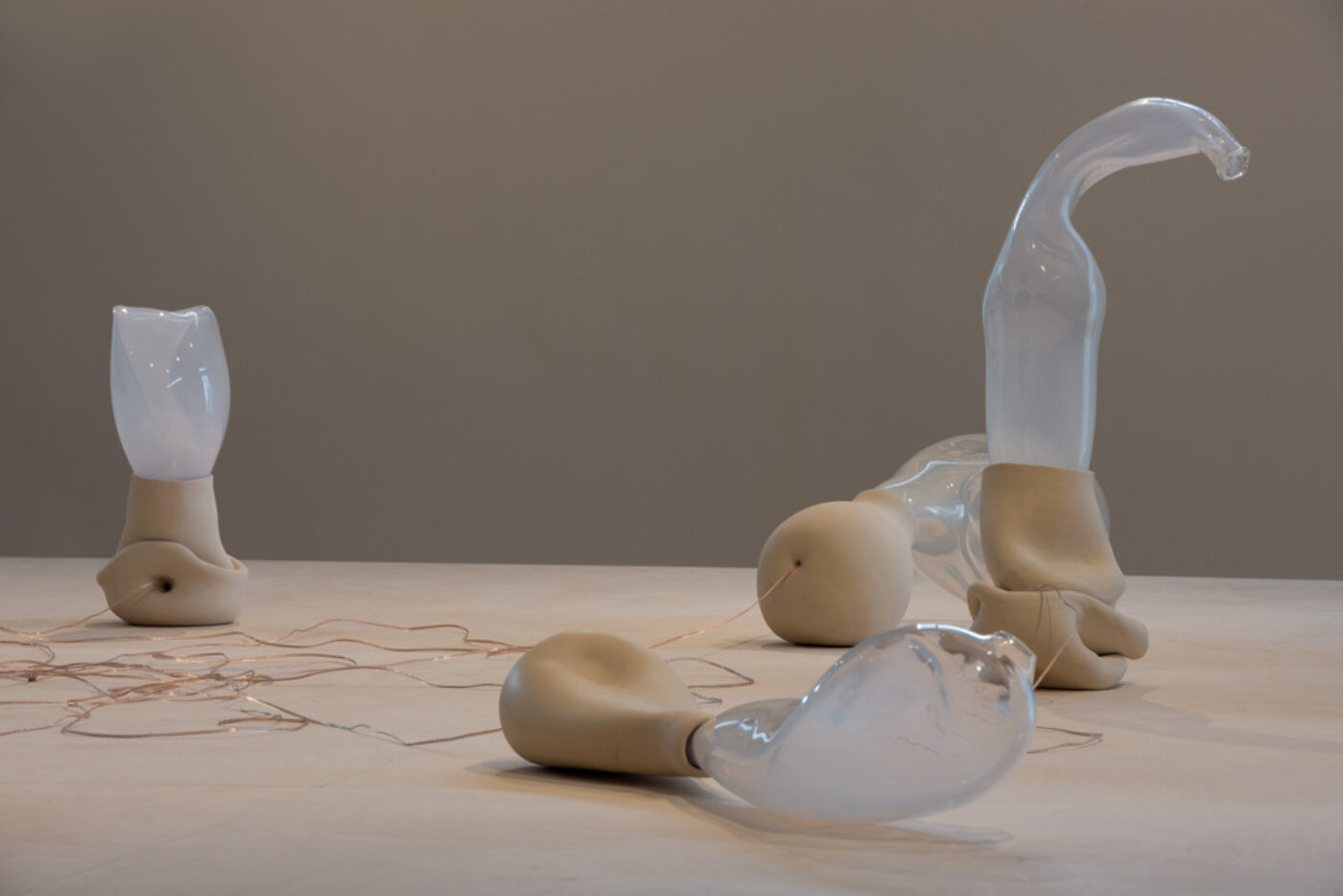 MWB There is a powerful contradiction in your art pieces. Your work is mostly non-narrative, revealing the sound environment in which we live—in line with musicians and sound artists like John Cage—but also emotional. You have even used the word “expressive” to describe it. How do you generate this tension? Being emotional without drama: Is this the power of sound?

JS Well, I would say that drama as specific and pure emotion is the universal. I have a piece at the Massachusetts Museum of Contemporary Art that relates to this. It is called In Harmonicity, the Tonal Walkway (2016). The material is only recordings of single sung notes and spoken text from thirty-eight people. It is installed in twenty separate channels along a long tunnel. You walk through the voices.

I wanted to create an emotional experience without narrative, so emotion had to come through something captured and transmitted in the recording, from the vocalizing person to the listening person.

The piece was an investigation of the connection between tones and the body (like Sine Body), but this time I was thinking about the emotional body. One element that informed this piece was an archaic chart I found, attributed to a Victorian era music teacher named John Curwin. This chart equated each of the seven tones in the diatonic scale to “mental effects,” for example: “LA, the Sad tone,” “FA, the Desolate tone,” “RE, the Hopeful tone,” and so on. I wondered if there might be studies about specific notes activating emotional states. I did lots of research looking to corroborate this with scientific tests or music theory, but I could find very little research-based information about it in those disciplines. I could only find references in spiritual or New Age texts.

MWB This use of sound to transfer emotions and energies reminds me of your term “archipuncture”—a sort of healing practice for buildings. How does this New Age-inspired concept inform your artistic practice as a sculptor?

JS I made up that term “archipuncture” accidentally when I was trying to describe an installation. It has to do with making conduits to increase energy flow in a space. An underlying theme in all of my work is circulation of energy. Energy flow can be physical energy like sound or light, or it can be attention. Moving the attention and energy from one point to another is a way of focusing it in order to transform or transmute something mundane or murky into something clear and potent.

MWB You employ sound to infiltrate museum buildings, and especially to re-channel energies into liminal zones such as functional systems (plumbing or electrical pipes) or transitory architectural spaces (bathroom, corridors, pathways). Why are you attracted to these in-between spaces?

JS One reason I have tended to these marginalized spaces is that they are sites in which you wouldn’t expect to find an art experience, and surprise is a sensitive and useful state! I also appreciate the humor that the incongruity can provide. In housing artwork in these sites, I am reconsidering the dichotomies of privileged/unprivileged, public/private space. Another reason might be this idea of tending, addressing, bringing care, attention, and energy where it otherwise may not reside. 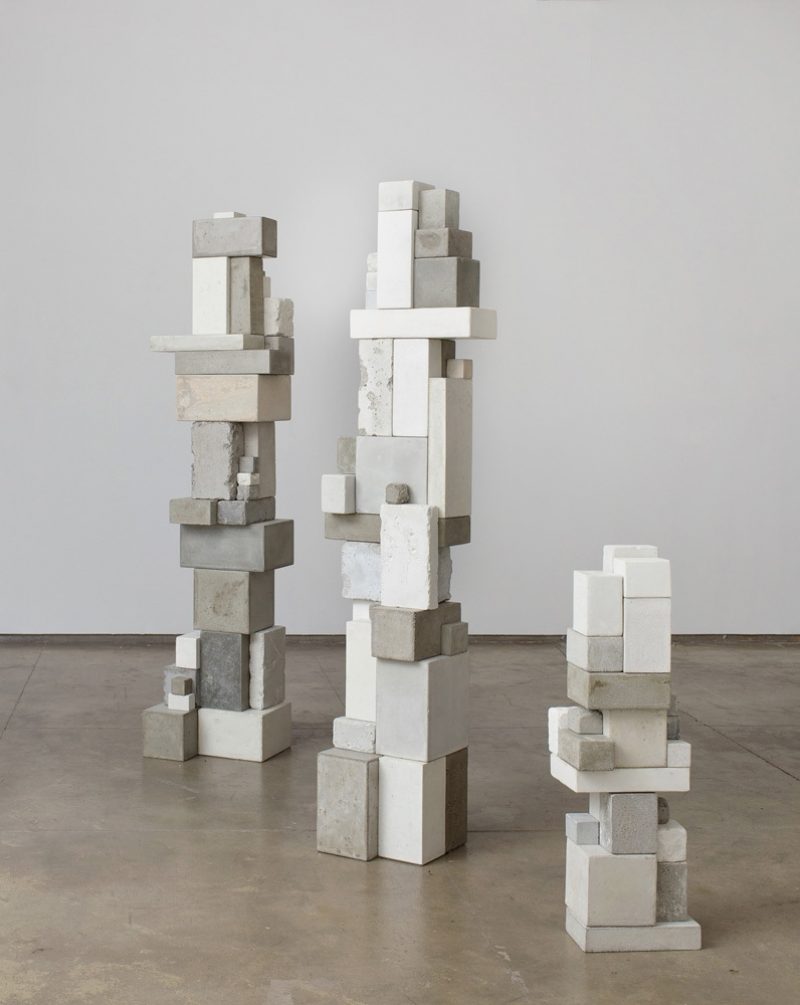 MWB Your practice reveals our emotional and physical relationships with disregarded spaces and their materiality. Does sound enable you to redefine the boundaries of bodies (I am thinking of material and human bodies here), and could it be a way to reconsider or transform what intimacy is?

JS The use of sound engages listening, which is one of the most important pursuits in my work. Not everyone hears, but everyone listens. If someone doesn’t hear, they listen with their body. And conversely one can hear and not be listening. Listening involves opening and taking in new information. To listen is to inhabit a receptive state of being. I am markedly influenced and inspired by the writings and exercises of Pauline Oliveros that attune deep states of listening.

In every work, I consider intimacy through opening possibilities of relationships. For example, Sine Body proposes an intimacy with self, an opportunity to slow down, feel the physicality of the resonant tones, and form a relationship with the strange objects that voice them. The Surrogates offer an intimacy with me by offering an understanding of my attachment to those figures and a consideration of one’s own intimate relationships.

Redefining boundaries and the relationships between bodies and spaces is a way to negotiate a fixed understanding about things. This goes back to your previous question about cultivating a state of the uncanny. I create the surprise to introduce space into a belief. It enables me to destabilize sensory perceptions, along with the beliefs and social assumptions attached to them.

MWB Before we end our conversation, I would like to list the elements you deal with: marginalized spaces, disembodied sound, vibration, energy, emotion. The invisible and the ethereal are driving forces in your work. Isn’t it paradoxical in terms of sculptural practice? Is this a way to redefine what sculpture is today, in a materialist and technological eco-system?

JS I love the paradox of the invisible seeping and speaking through matter. I make sculpture because it relates to the body. So I guess this paradox does relate to a “technological ecosystem,” which I think is a great term, in that I am constantly trying to bring attention to invisible forces and recognize their relationship to the material.

For instance, I revisit the use of voice because it is simultaneously physical and not. The voice is a part of the body that extends out of the body—it travels on air—to be received through another body’s ear, and perhaps by the heart. I love that our voices have a totally ethereal presence. Now, I’m moving beyond the human voice to other voices—like the tones created by the Sine Body vessels.

Julianne Swartz’s work can be seen in the group exhibition Hedges, Edges, Dirt at the Institute for Contemporary Art at Virginia Commonwealth University in Richmond, VA, until January 6.

Mathilde Walker-Billaud is a cultural producer, editor, and curator based in New York City. She organized multidisciplinary programs for the Cultural Services of the French Embassy, Villa Gillet, and UnionDocs, including the ongoing series of mixed media talks, “What You Get Is What You See.”