Ross Racine’s maplike prints of suburban landscapes are like being airborne over an imagined America. He talks to Sarah Gerard about materiality and immateriality, paper, and maps. 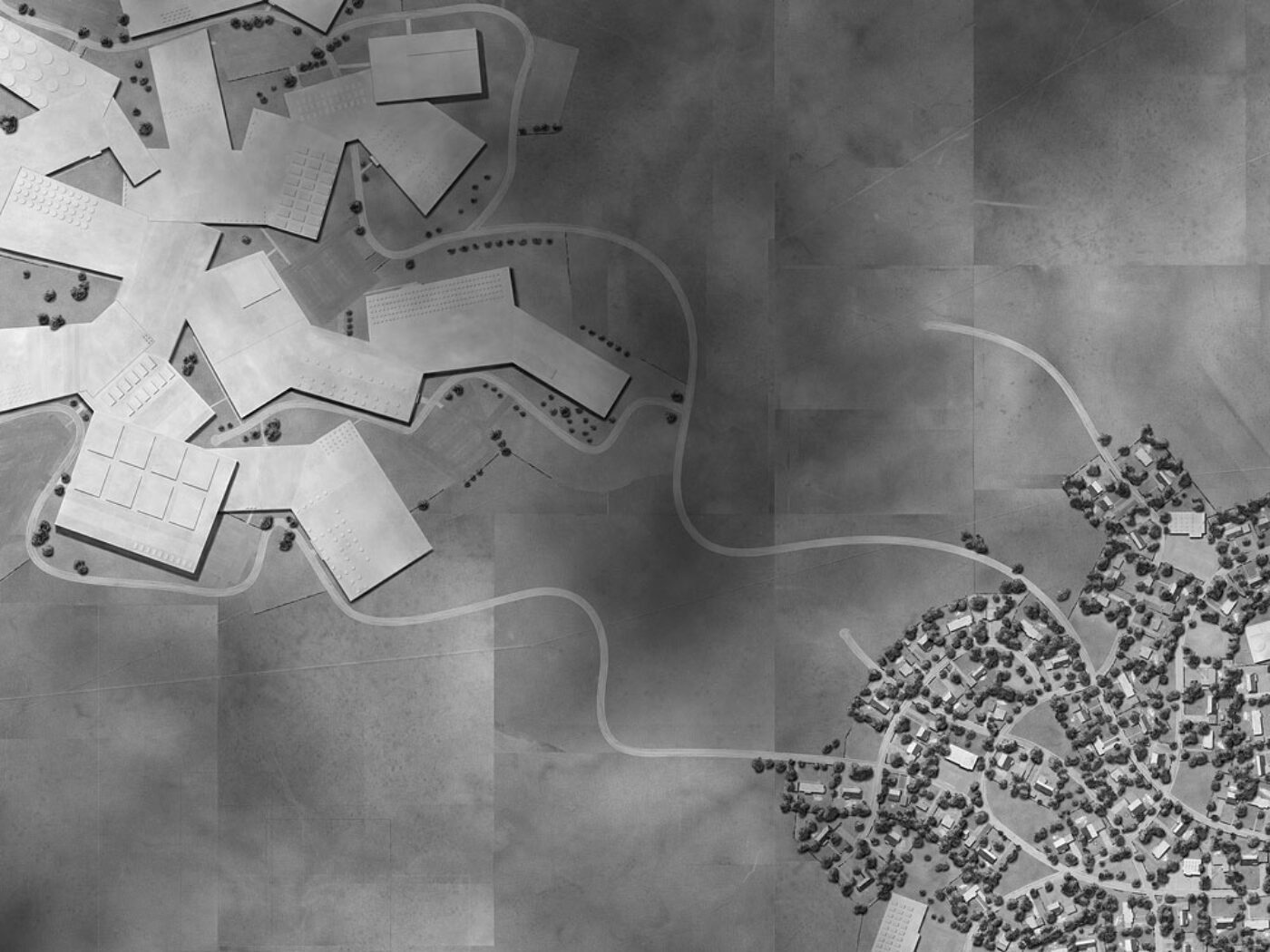 I found Ross Racine first in the summer of 2010, when an editor-artist I was working with at the time suggested we interview him for a journal we were publishing. Having recently moved to New York, I was eager to visit galleries. I discovered Racine had work in a group show hanging in the Jen Bekman Gallery, in a show called “Land Use Survey.” I went.

Racine’s work tells the story of the quintessential suburb. If he were a writer, he might be something like Franzen or Roth, but with a dreamy, ethereal layer he places between you and the subject. You’re in the position of a God, or a child, looking down from above, fingers twitching to move the pieces.

I met him in his apartment in Manhattan on a sunny afternoon that came in through his tall, stately windows. He pulled out three portfolios and began to talk.

Ross Racine I work on the computer and I don’t scan anything. I don’t even scan drawings, I don’t scan photographs. It’s all drawn from scratch.

Sarah Gerard Why did you make the decision to switch?

RR I was frustrated, especially in the late 1990s, when in the last couple of years, at least five years before switching to this, I was particularly frustrated with the material aspect. I had worked as a computer researcher, in a way, as a programmer/designer, in computer graphics research. That was twenty-something years ago. And I had worked in the ’80s, like from ’85 to ’90, so twenty-something years ago, at the University of Montreal. That was my day job. Even at that time, I knew that eventually I would make the jump to computer art. I was a happy painter, but I was really intrigued by the immateriality of the image on the screen.

SG What was it about the materials that frustrated you?

RR Just the physicality. I came to prefer to make images as if I were dreaming about them.

SG Does that mean that when you paint, you’re bringing dreams into the physical world?

RR I used to paint. Oh, you mean when I make images on the computer?

SG No, I mean when a person paints, he’s making dreams physical?

And actually, the computer is material, too, but it’s non-physical in many ways. I work with my hands, but there’s no paint to push, there’s no thick, colored goo to spread, and there are no lines to draw on the paper. It’s on the screen, and eventually it becomes ink that drips on the paper. Compared to some other computer artists, I prefer—actually, I insist—that my work be printed. So, I’m not actually completely virtual. I use the machine to actually end up with paper again. I’m back to a physical product at the end.

SG Do you see yourself moving away from the physical object, also?

RR Not really, no. I like to actually see something that’s part of our world. We live in, are surrounded by, photons that bounce off surface and come back to the eye, so just like a table is physical, my art is physical. My computer screen is something else, in a way. The image there is less physical in many ways, but that’s my process only. The end product should be on paper. For me. 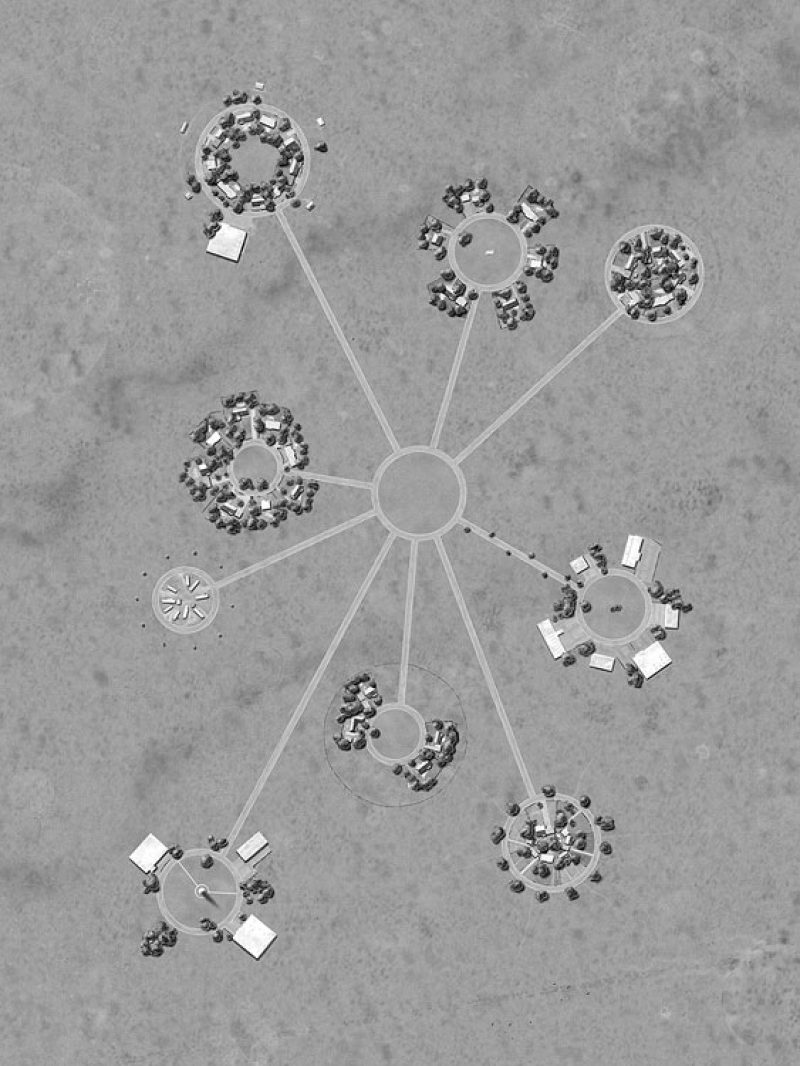 SG What are the limitations of working on a computer?

RR There are limitations. The first one is not working directly on the support that will actually be the final artwork.

SG Do you find that you have a lot of surprises?

RR Well, I used to have, at the very beginning, but now I’ve been doing it for so long, since ’96, and I’ve gone through a couple of phases with the paper that I use, and different kinds of prints, and I finally went inkjet in 2001, more or less. I tried it before and went back to photo paper, and now it’s been inkjet for a while.

SG What was the problem with the inkjet before?

RR Well, with photo paper you get more depth, and I prefer the photographic qualities, resulting in a deeper image. Those series were very different. These are aerials, and I’ve been doing these for a couple of years, but before, I did architecture and things that are hard to describe, also, even abstract spaces. Even in the first couple of years, my reference was photography. 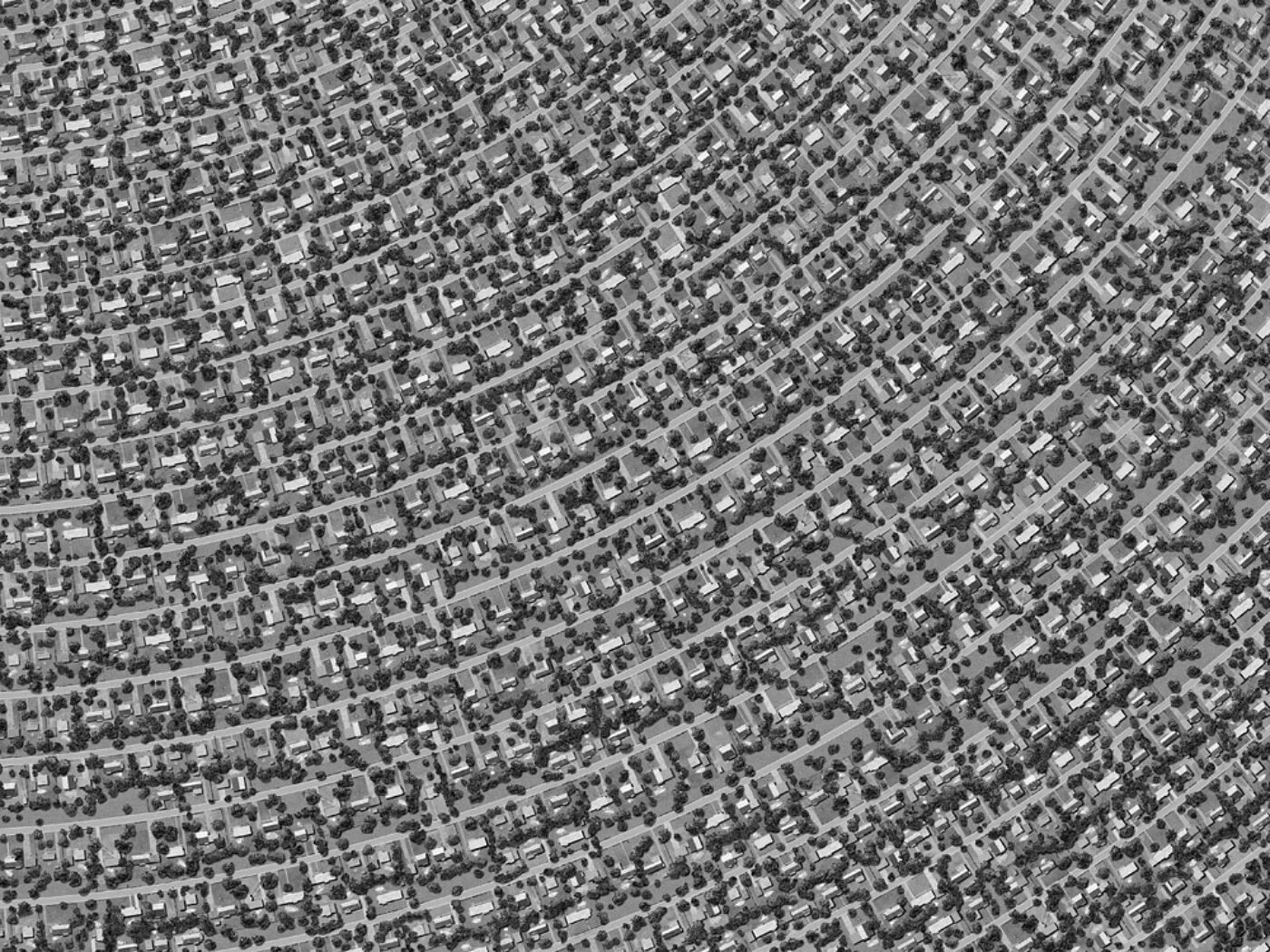 SG This one looks almost photographic.

RR Because of the realism, you’re right. I’m still close to photography in many ways. First of all, I work in a realistic mode, more now than before. I work in grayscale, also, so there’s no color, which would make it more painterly than photographic. So, I have to deal with that. I want realism. To me, these are drawings because they’re not photographs, but they are flirting with the photo world.

SG Do you start with lines?

SG What determines the shapes of the roads? 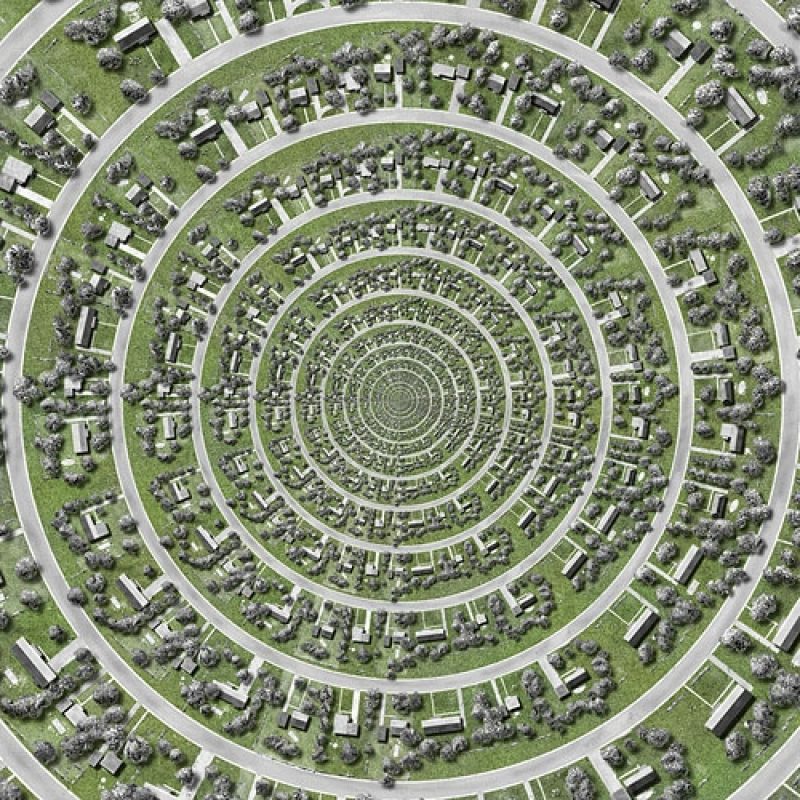 SG What is it that you hope to discover?

RR Well, I have intentions. I did the aerials very spontaneously. Before, I was doing buildings and architecture. Staying at the level of large sketches, I wasn’t really going anywhere, but aerial views can be very enticing. I love maps for the same reasons—I always imagine myself floating around on a magic carpet, with as much realism as I could muster, looking down on the actual world. Sometimes fantasy worlds, but sometimes the actual world.

The view from above has fascinated me since I was a kid. We all have those passions, and it took me a long time to actually integrate that into my art. I actually tried earlier, without going anywhere, doing maps. I’ve always been a fan of maps, but I didn’t do maps as art. I made up maps in my head. More recently, this actually is my version of the map. All these aerial views, they’re not maps, really, but they are very close because they are very particular. I’m not interested at all in doing landscape painting. It’s very different. I like the fact that this is, in a way, flat. There’s no depth. There’s only relief. It does make the map argument; I don’t have any perspective to distort the map. And this is perpendicular, so you have the same angle as a map. There are a couple of books of maps as art, in a very wide sense. It’s very inspiring for me.

SG What is it about maps that interests you?

RR Well, the first thing is that I don’t know. Anything that interests me has an aspect about it that I don’t know. A lot of artists will say that. I don’t know why I like maps. I don’t know why I like aerial views. I can say that it’s a lot of things, afterwards, but the first thing is basic interest. The map is more of an abstraction, but [the aerial view] is more literal. Diagrams are even more abstract than maps. I don’t know if the viewer actually feels a diagram like he does a map. I’ve had sketches for outright diagrams, but I’ve never made art out of them because they’re too obvious. I know the viewer actually thinks a diagram, but I don’t want it to be too literal. I want them to feel the art. 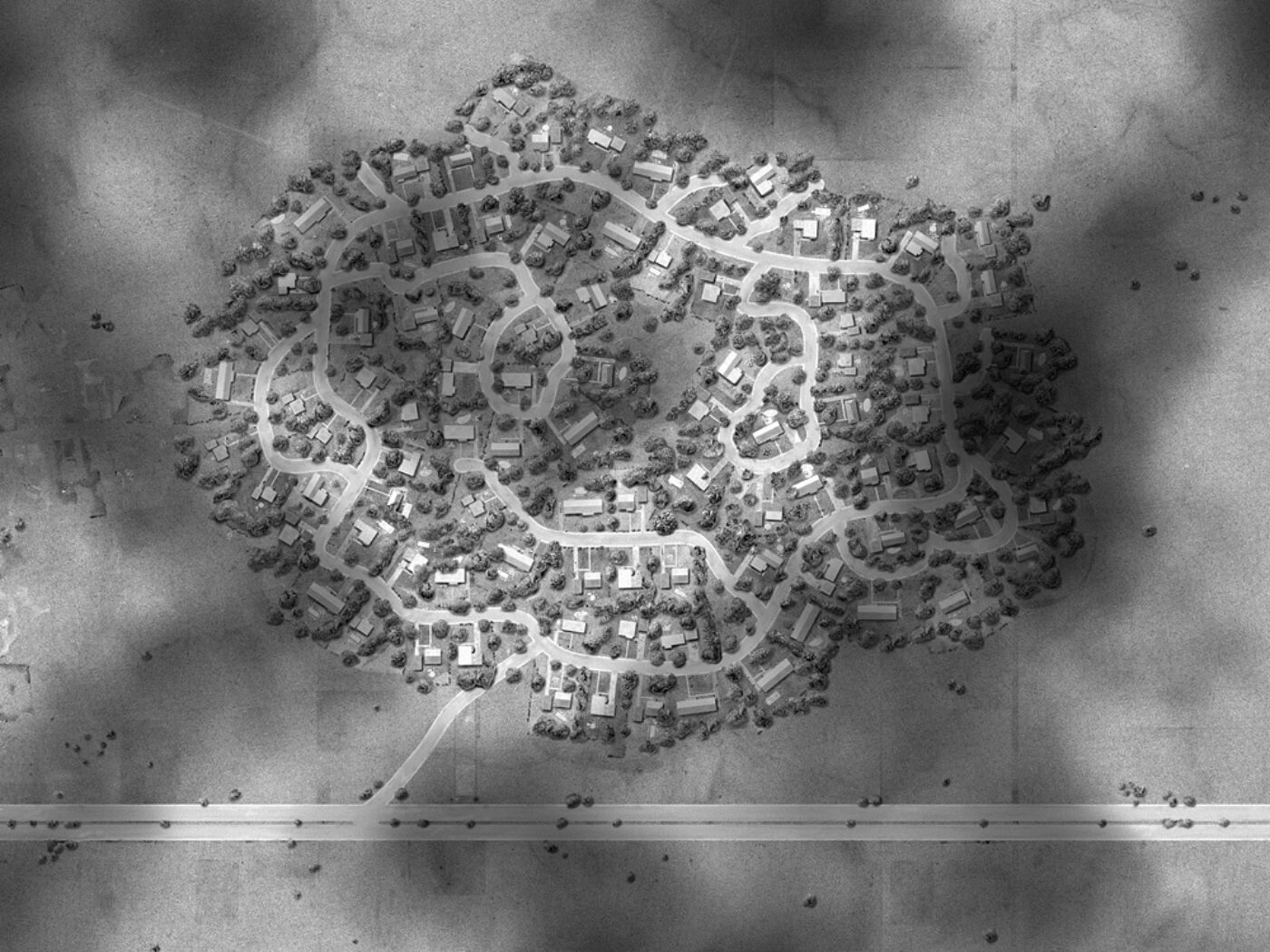 SG My mind automatically tries to make a recognizable picture out of your pieces when I see them. Are you aware of that while you draw?

RR This piece, Happy Hollow, is on the borderline. Some people see it, some people don’t. This is one that I don’t show much anymore. I wanted to make it obscure. It’s a face, but it’s very distorted. There are two eyes. And it is organic; there’s something moving in there. It’s easier (to see) when it’s on the wall, or from a certain distance. But I won’t flirt with the border between recognizability and unrecognizability anymore, because it is kind of annoying for some viewers. They don’t know what’s there.

SG I don’t see people or cars in the roads. Are the towns abandoned?

More of Ross Racine’s work can be found at http://www.rossracine.com/.

Sarah Gerard is a Brooklyn-based writer and contributing editor at Caper Literary Journal. Her work has appeared or is forthcoming in the St. Petersburg Times, the Brooklyn Rail, Word Riot, elimae, DOGZPLOT, and Prick of the Spindle. She was founding editor of the Studio Review and managing editor of the Homeless Image, a southeast regional street paper. She is an MFA candidate at The New School. 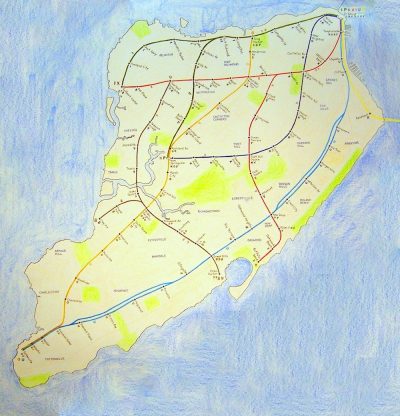 A discussion of urbanism and Staten Island, cartography, and monumental sculpture’s place in modern society. 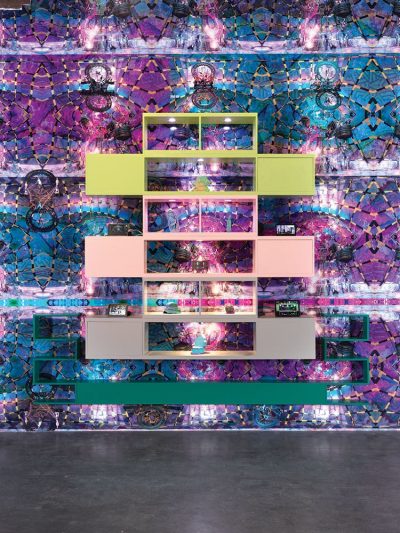